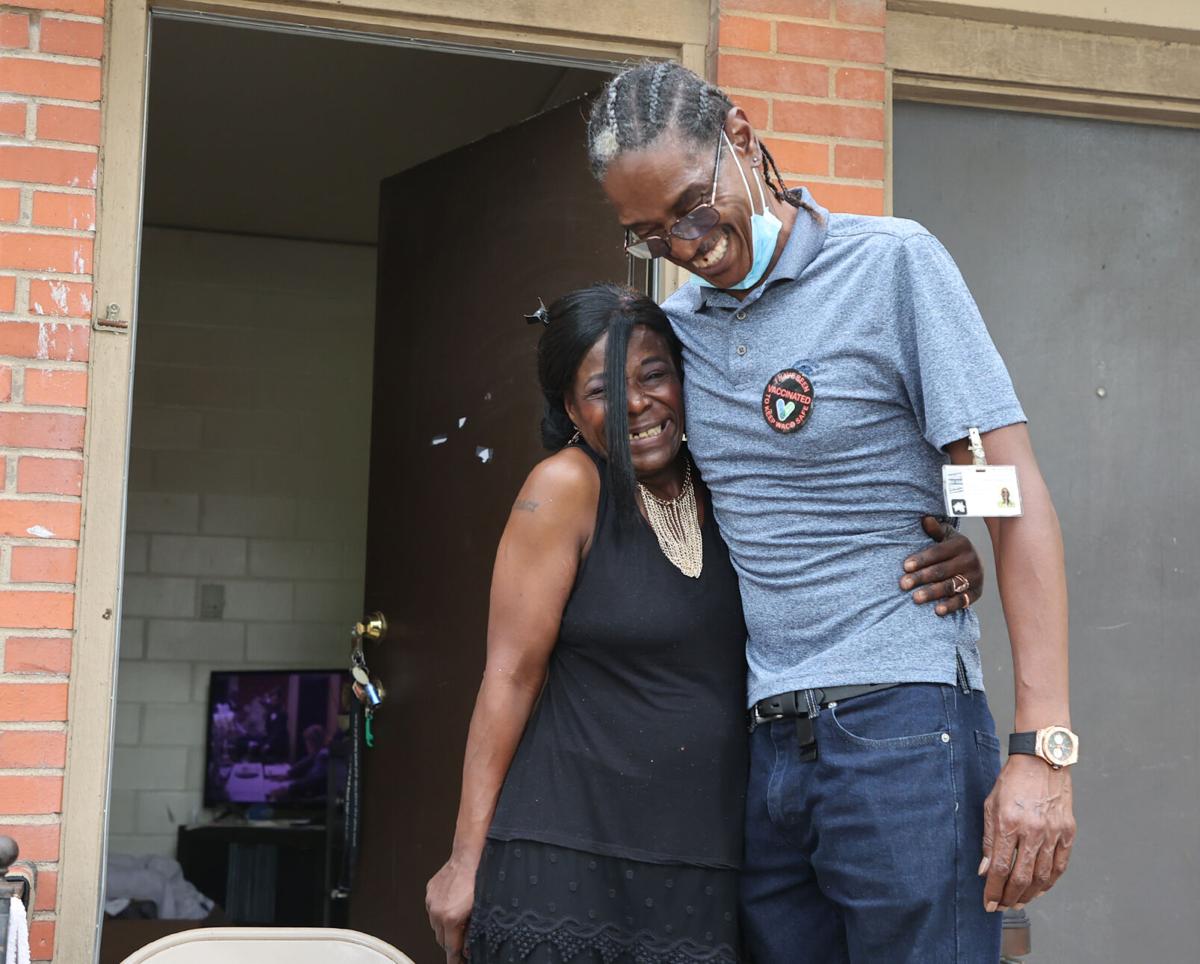 Leonard Buffin gives Tracey Fox a hug last week as he talks to residents at Kate Ross, encouraging vaccination against COVID-19. Fox said she got the shot in July after encouragement from Buffin. 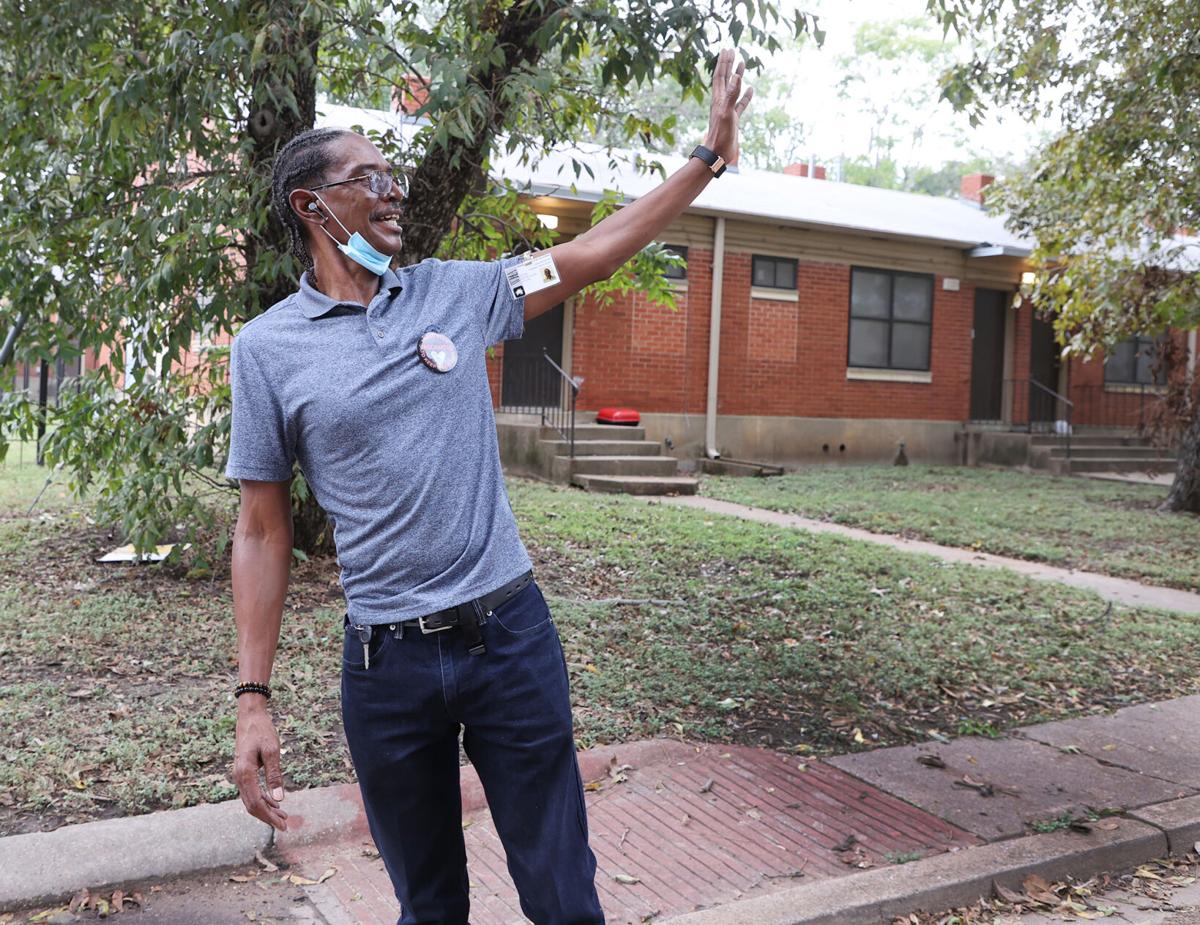 Waco Housing Authority advocate Leonard Buffin tours Kate Ross, one of the complexes he visits to encourage people to get the COVID-19 vaccine. He said he has worked up a friendship with many tenants, which has been key to convincing some to get the shot without diminishing their views. 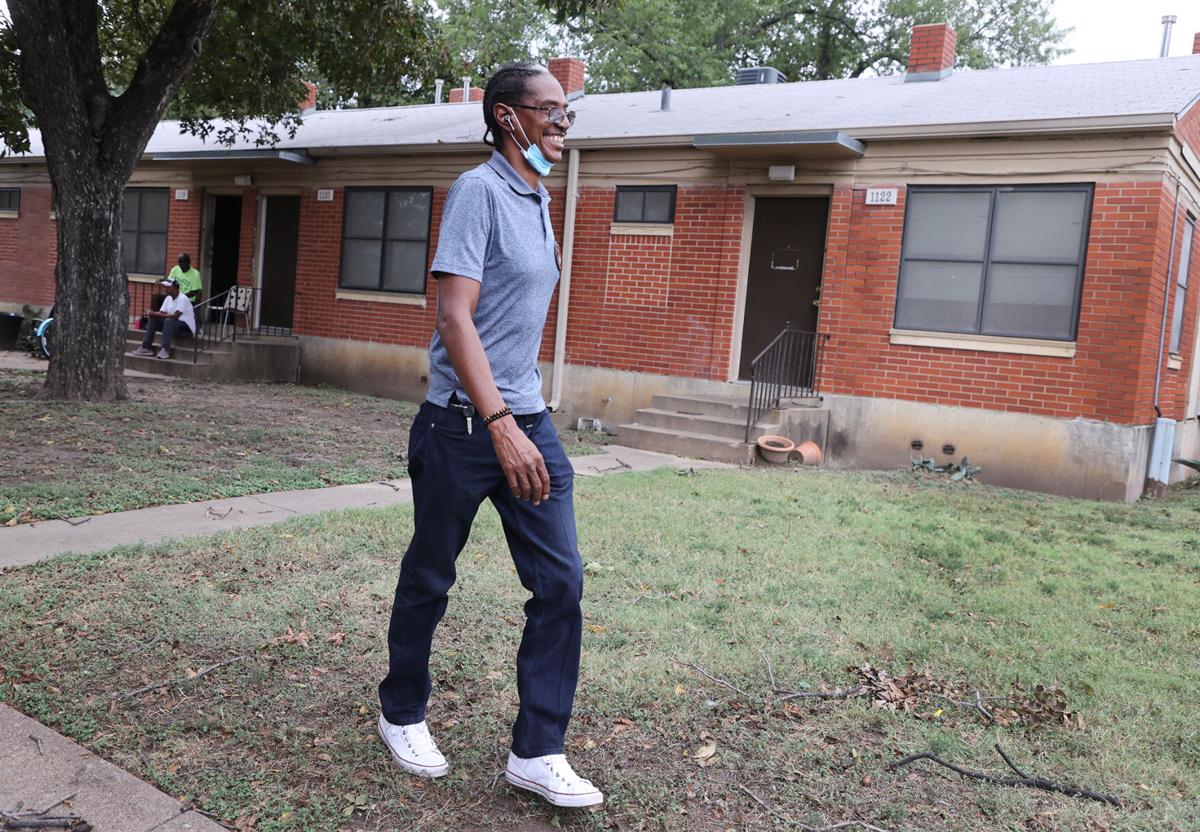 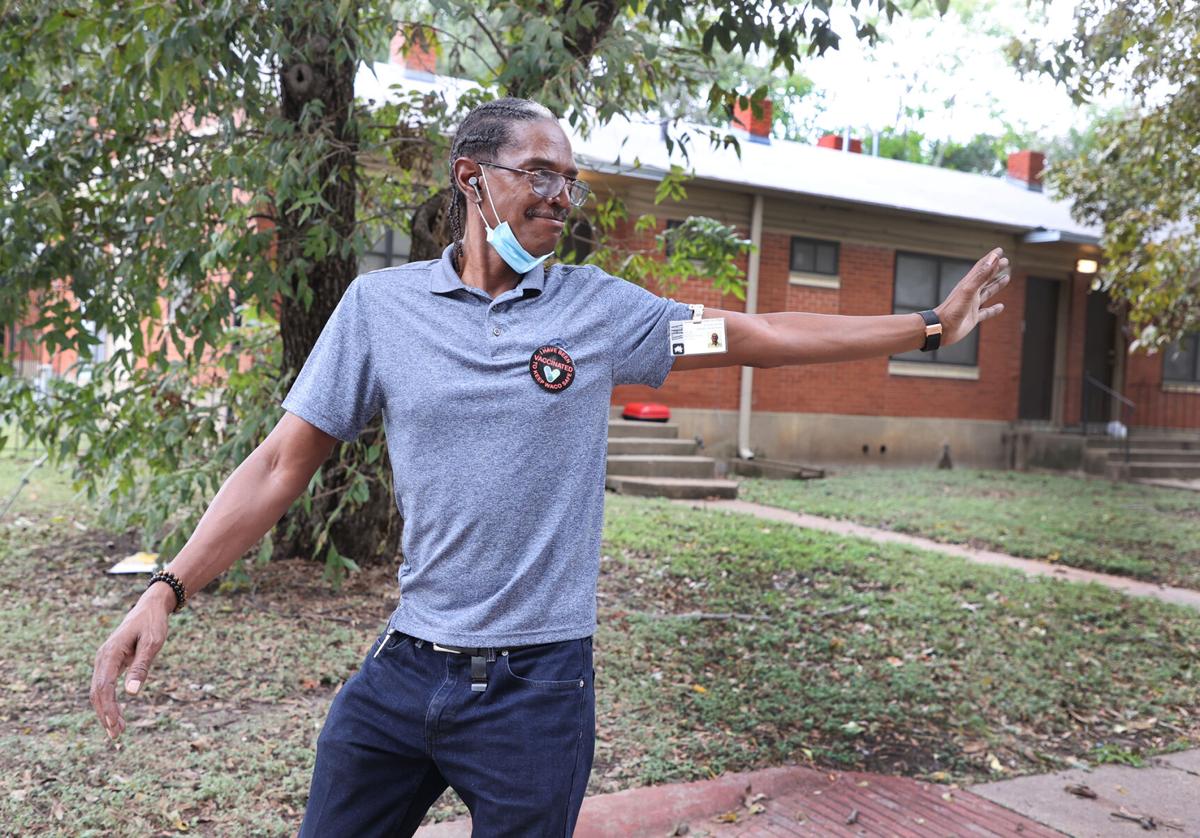 Successfully making the case that someone should get the COVID-19 vaccine despite their misgivings will not happen without time, genuine care and respect, according to the man the Waco Housing Authority hired to do just that.

Leonard Buffin assisted people with intellectual and developmental disabilities at the Mexia State Supported Living Center for 30 years before the Waco Housing Authority hired him as a vaccine ambassador this summer. He said the work he is doing now takes time, and much more than making conversation and scheduling shuttles. So far, 20 people he has talked to have decided to get vaccinated.

“Sometimes they’re tense, but then they see you on a daily basis and you’re not confronting them, you’re just talking about what’s going on,” Buffin said. “You’ve got to relate to their issues. I know I have to listen to them.”

Buffin heads to the housing authority’s South Terrace Apartments, Kate Ross Homes and Estella Maxey Place each day, going door to door and striking up conversations with people about why they should get the COVID-19 vaccine.

On Thursday, he picked up longtime Waco resident Larry Mathis, 64, from his apartment in a housing authority van to take him to the closest H-E-B pharmacy for his first shot. Mathis said Buffin convinced him after weeks of conversations.

“You finally got me,” he said.

As he got in, Mathis turned to Buffin in the front passenger seat of the van.

“Y’all are the ones who keep telling me ‘we’re going to take care of you,’” Mathis said with a nervous laugh. “Well OK, I’m going to look for you.”

He said he wanted to consult his doctor on getting the vaccine because of his medical history, but she recently left the clinic he goes to, and he had a hard time reaching anyone who could answer his questions.

Mathis said he had more reasons than most to avoid the vaccine. He said he has been leery of vaccines in general ever since he took a flu shot in 2007, had side effects, and developed bronchitis and pneumonia that kept him away from his job at AJ Moore High School for three weeks.

“Nobody’s been able to get me to take another one since then,” Mathis said. “I’m stepping out on this one, and now I’m older and have a lot more health issues going on.”

He said his niece’s husband came down with COVID-19 symptoms two weeks after getting his second vaccine and eventually developed pneumonia, which also put him off the idea.

“If anything happens to me, thank God I’ll be in a better place, in a better world,” Mathis said. “That’s all I can say.”

Buffin said he never expected Mathis to come around, but after long conversations about everything from his reactions to previous vaccines to the Syphilis Study at Tuskegee, in which public health doctors and federal researchers lied to Black men infected with syphilis, claiming to treat them while actually observing the progression of their illness for 40 years.

He said people have a natural tendency to dig in their heels to the point that they might feel too invested or self-conscious to change their stance, even if their views are changing. He said his previous jobs helped him learn how to talk to people without making them feel defensive.

He said the best way to leave the door open for people to change their minds is to take everything they say seriously up to that point.

“The number one thing I learned from working in an institution is that people like to be listened to,” Buffin said.

One religious woman whose husband died of COVID-19 told Buffin the Lord had clearly spared her from the virus. Buffin kept visiting her, finding ways to discuss the vaccine without making her feel her beliefs were under attack. The day he dropped by while she was praying and knocked on the door, she said God was telling her it was time to get the vaccine.

Buffin said the human approach helps, but some people are more interested in the numbers. He has health department employees at vaccine clinics to fill people in on local statistics and answer questions about the vaccines.

Buffin said a lot of people delay the second shot even after agreeing to the first. He said in his experience men are especially prone to putting it off compared to women.

“I wish I had more Johnson & Johnson vaccines, but I don’t,” Buffin said. “But just like I get them to take the first one, I’m the same way about the second. I’m not argumentative about it. I tell them they have plenty of time.”

In H-E-B’s pharmacy, signs inform people waiting in line that zinc and vitamin C supplements are on sale. Buffin said many of the people he is trying to reach tell him they take nutritional supplements to protect themselves in lieu of the vaccine.

“Sometimes I say ‘but we took 12 of them (vaccines) just to get through school,’” Buffin said.

Mathis chose the Pfizer vaccine specifically because it has regular approval from the U.S. Food and Drug Administration, while the other have emergency approval.

Buffin has been doing this work since June, and he has had some extra help for the past two weeks. The housing authority is started offering incentives in the form of $40 gift cards, funded by a grant. He said the recent addition has helped by serving as a conversation starter, but that alone will not convince anyone.

“If I don’t listen to them, they’re not going to listen to me,” Buffin said. “I have to empathize with what they’re saying.”

He is also working on getting buttons like his own, declaring the wearer has been vaccinated, for older people he has convinced to get the vaccine who want to help others do the same now.

“Once they take it it’s like a weight off of them,” Buffin said. “They can go live.”

Leonard Buffin gives Tracey Fox a hug last week as he talks to residents at Kate Ross, encouraging vaccination against COVID-19. Fox said she got the shot in July after encouragement from Buffin.

Waco Housing Authority advocate Leonard Buffin tours Kate Ross, one of the complexes he visits to encourage people to get the COVID-19 vaccine. He said he has worked up a friendship with many tenants, which has been key to convincing some to get the shot without diminishing their views.