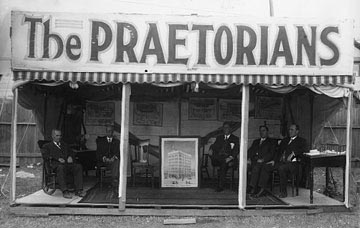 The Praetorian Building in downtown Waco was built in 1913 by Hughes O’Rourke Construction of Dallas for the Modern Order of Praetorians, a fraternal organization. 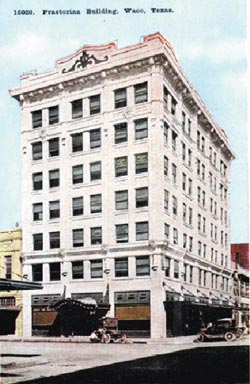 A postcard image of the Praetorian Building, about 1920. 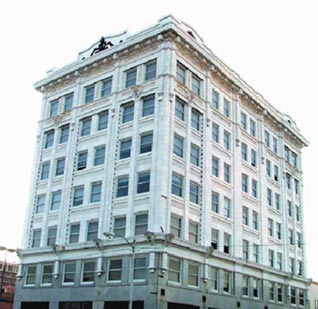 Now undergoing nearly $1 million in renovations through Ellis Isle Equities LLC and the local Tax Increment Financing board, the Praetorian Building prepares to do business into its second century.

Though it is not as famous as its towering neighbor — The ALICO — downtown Waco’s Praetorian Building at Franklin Avenue and Sixth Street deserves to be celebrated in its own right.

The historic seven-story structure has been a part of the skyline of Six Shooter Junction for almost a century. It was built in 1913 by Hughes O’Rourke Construction of Dallas for the Modern Order of Praetorians, a fraternal organization.

The group was founded by C.B. Gardner in 1898 as the first of many life insurance companies to be chartered in Dallas and Texas.

When the firm prospered in Dallas, Gardner and his associates commissioned the architectural concern of C.W. Bulger & Son of Dallas to design a grand edifice befitting a city on the grow. The Bulgers crafted a 15-story building for the company’s headquarters — the first skyscraper in Texas or even west of the Mississippi, for that matter.

C. W. (Charles William) Bulger and his son, Clarence C. Bulger, specialized in the design of more than 75 churches in Texas and numerous others in 20 states. But as with many architects of the early 20th century, they also were available to design public buildings (schools, hospitals, government offices) and private homes in swanky subdivisions.

The Bulgers were asked to put their stamp on what would became Waco’s Praetorian Building. In 1908, they had founded the Texas State Association of Architects. The younger Bulger (1881-1956) also had received his bachelor’s degree from the University of Chicago in 1902.

The tower on Franklin featured a white terra-cotta facade, marble interior, mahogany doors and window frames, ornate ironwork and brass escutcheons with the Praetorian emblem (a Roman column) and the Latin motto “Non Nobis Solum,” or “Not for us only.”

It is topped with a mission parapet, unique to a style of architecture popular 100 years ago called the Chicago School. The term refers to the commercial and office form that developed in response to new technologies that permitted greater physical height and larger expanses of open floor space in city structures.

Metal skeleton framing, first in cast and wrought iron, later in steel, was foremost among the new construction developments that allowed buildings to rise more than five stories in height. Also known as Commercial style, it was characterized by its extensive use of glass for maximum light and ventilation.

It was in stark contrast to the load-bearing masonry walls of the 19th century that allowed relatively few windows.

The original tenant of the Praetorian Building’s ground floor was the First Bank & Trust, but during the years the space has seen a variety of shops and restaurants. Its upper floors have been used for offices, but conversions into residential loft apartments have taken place.

The Praetorian Building also has been known as the Service Mutual Building, Southwestern Building, Franklin Tower, One Liberty Place and Liberty Building. It went through an array of owners after it was sold in 1956, when the insurance company changed hands.

The Veterans Administration used it from 1962 to 1965. The building remained vacant from 1973 until late 1989, when it became Williams Tower. In 1996, the Praetorian Building moniker returned.

On July 26, 1984, the Praetorian Building was added to the National Register of Historic Places as an exemplar of the Chicago School of modern architecture.

The Praetorian Building in downtown Waco was built in 1913 by Hughes O’Rourke Construction of Dallas for the Modern Order of Praetorians, a fraternal organization.

A postcard image of the Praetorian Building, about 1920.

Now undergoing nearly $1 million in renovations through Ellis Isle Equities LLC and the local Tax Increment Financing board, the Praetorian Building prepares to do business into its second century.