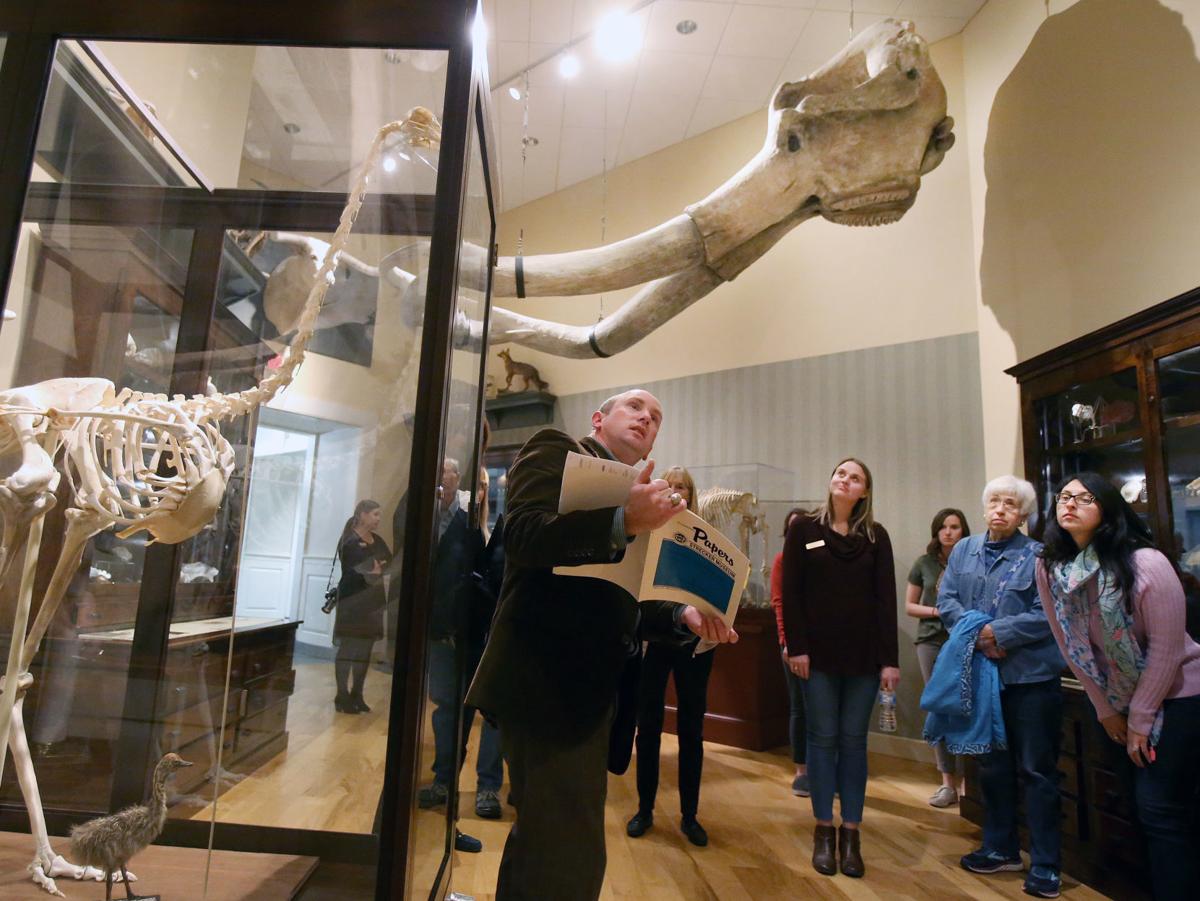 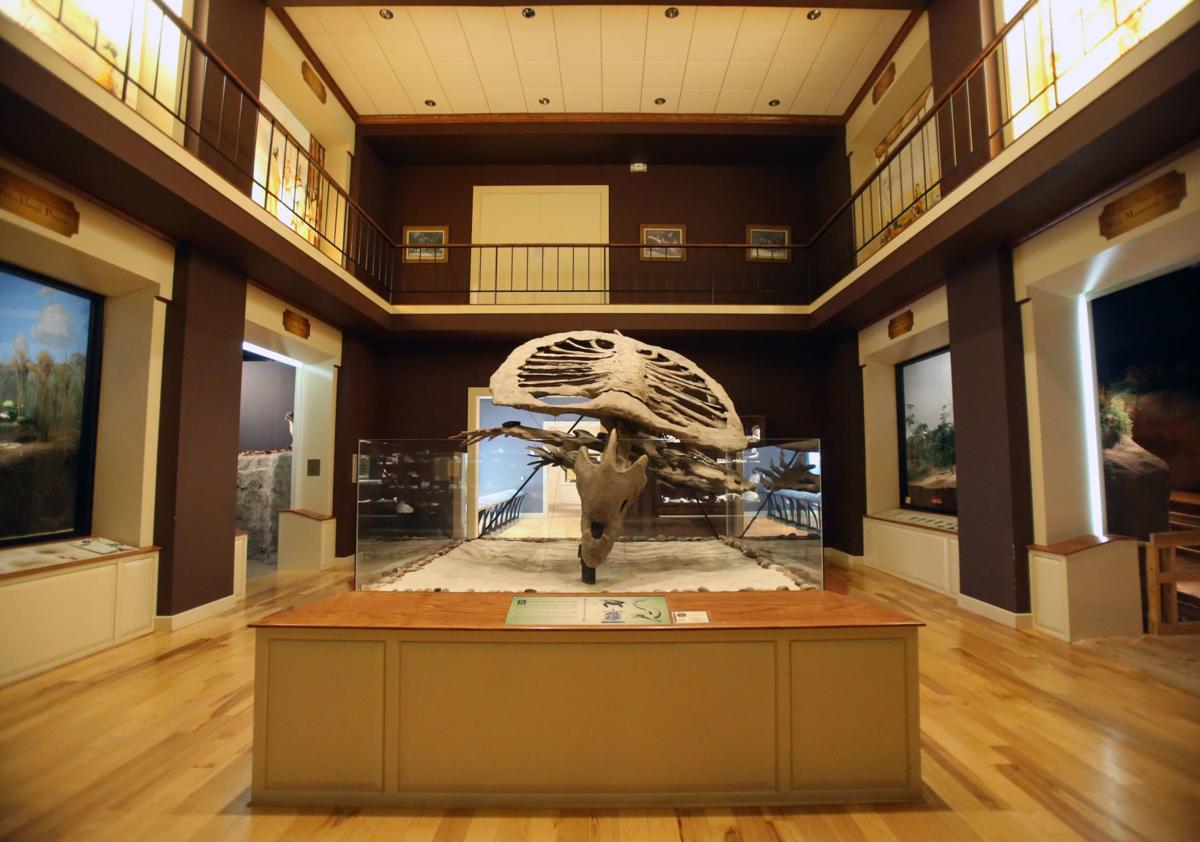 The Mayborn Museum’s artifacts, including this prehistoric sea turtle skeleton, may find new settings or story-telling techniques in the museum’s long-range upgrade. 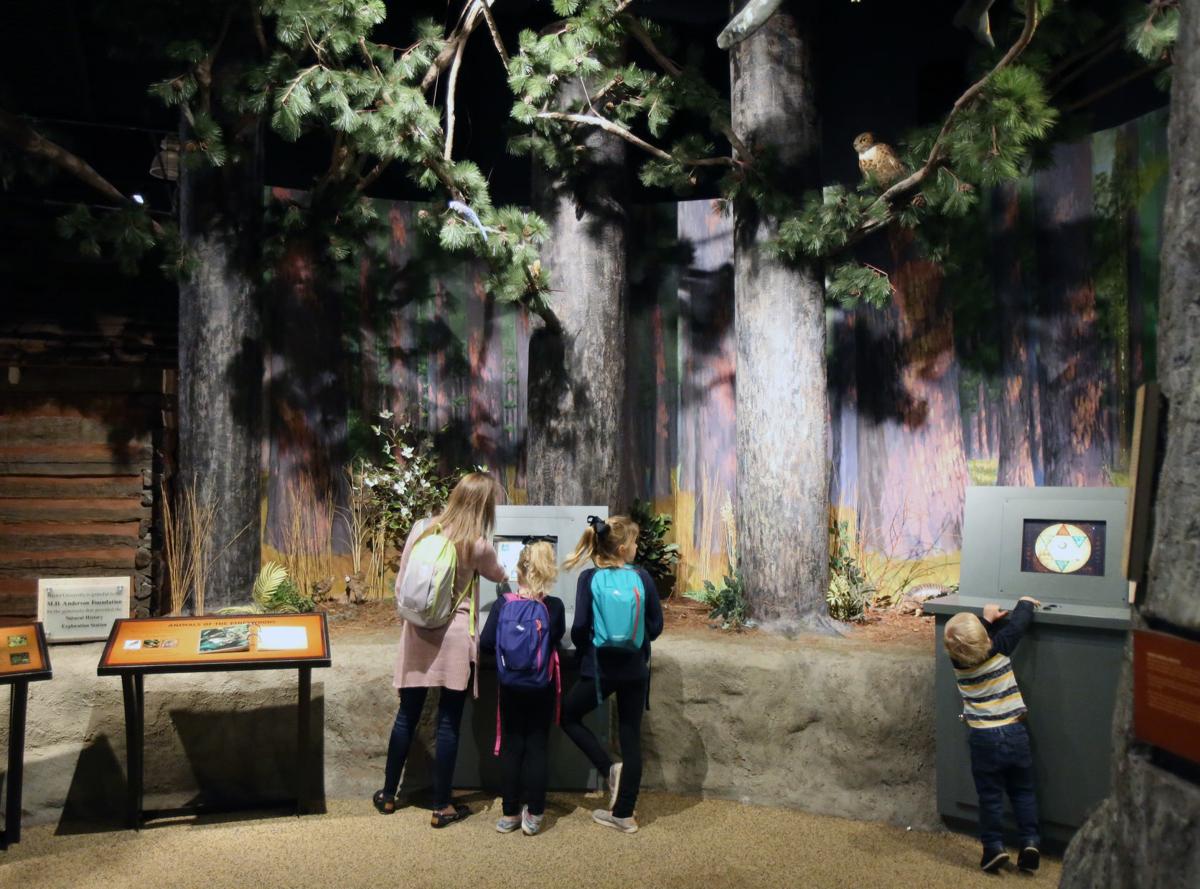 Visitors look over one of the natural and cultural history exhibits at the Mayborn. 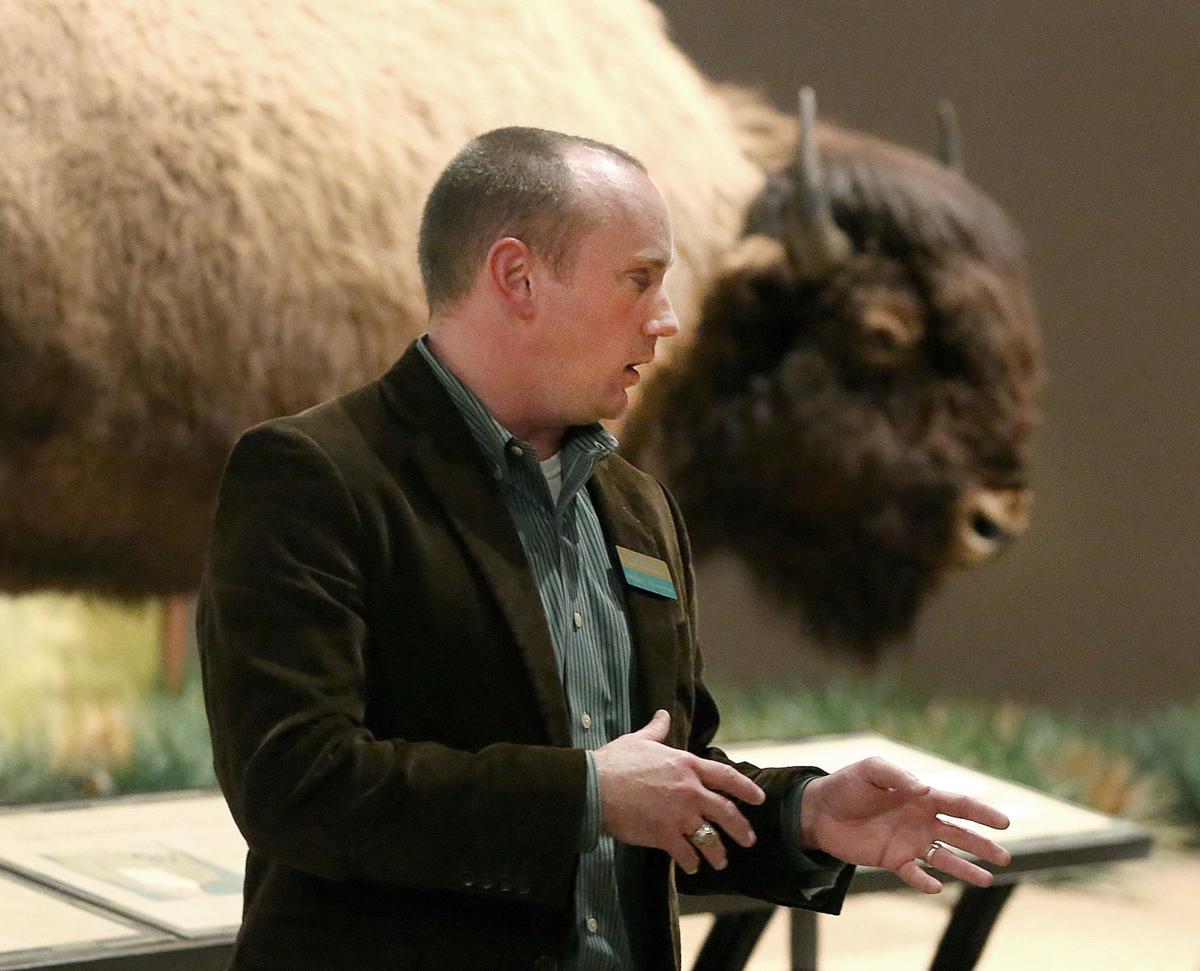 Mayborn Museum exhibits manager Trey Crumpton recently walked a small group of museum backers and Baylor University students through the museum’s main natural and cultural history wing for a glimpse at the future.

They walked past displays of fossils, rocks, animal and plant specimens, past a lifesize model Pliosaur suspended above a gallery room, over a see-through floor with replicas of mammoth bones found a few miles away, through a cavelike diorama and past full-scale models of a Waco Indian grass hut and a 19th century Texas rock house built by Norwegian settlers.

The theme of Crumpton’s walk-and-talk was not so much about the history the artifacts help reveal, but about the objects’ future: imagining what a walk through the Mayborn’s permanent collection might look like five or so years from now.

It could be a different walk for museum visitors. Those artifacts may be placed in new settings and used in new methods of storytelling, better integrated with the Mayborn’s Backyard Ecology Hall and Discovery Center. That future walk may include interaction with ongoing scientific research at Baylor, exhibits built in spaces now unused or underused, maybe even a bronze mammoth standing sentinel outside the museum entrance.

Museum director Charlie Walter said the proposed changes, which flow from recommendations of a 2017 strategic plan, will keep the museum where it should be in its mission to Central Texas and Baylor University audiences.

“I believe our museum can stand toe-to-toe with any top-rated museum in the country,” Walter said.

With completion of a $1.2 million Backyard Ecology Hall last year, the Mayborn can turn its attention to its natural and cultural history wing, which has not seen major changes since the museum opened in 2004.

Since then, museum exhibition and storytelling technology has advanced, the Waco Mammoth National Monument has opened and attendance has jumped to make the Mayborn among Waco’s most-attended attractions.

Support has increased as well, with family memberships topping 2,600.

Walter said updating the museum’s exhibits was a top priority from the long-range study, and the upcoming year will find museum staffers, consultants and supporters brainstorming what the Mayborn needs to fill gaps in the stories it tells of Central Texas from prehistoric times to its 19th century populations.

There are plans, pending Baylor University approval, for a bronze mammoth statue outside the museum to help identify the red-brick building with what is inside.

Areas used for storage behind the museum’s galleries and a mezzanine above the museum’s entry foyer might be turned into exhibit spaces that would enable better integration between the Mayborn’s natural history displays and the Backyard Ecology and Discovery Center.

Other goals include highlighting Baylor research in the context of certain topics or exhibits, much as the museum does in the Backyard Ecology wing. The museum’s relationship to the Waco Mammoth National Monument also will be emphasized new displays of fossils as they are uncovered in ongoing work at the mammoth site.

“The Mayborn was the birth parent of the mammoth site, and there will always be a closeness between the two,” Walter said.

Audio-visual technology also could transform some exhibits, such as moving images of bats exiting a cave projected at the museum’s cave diorama or digital Native Americans or Anglo settlers explaining their history and culture to museum visitors.

It will not be cheap. Walter estimates a price tag of about $14 million if done to the quality of the recent Backyard Ecology Hall renovation, but doing so will position the Mayborn to continue its success.

The year ahead will still bring new exhibits to the almost 16-year-old museum. The children’s “The Lion Guard,” inspired by the Disney Junior animated series, will open a five-month run Saturday, followed in the summer by “Paw Patrol: Adventure Play.”

For adults, “Founding to Future: Bright Lights of Baylor University”, beginning Feb. 1, will mark the university’s 175th anniversary with a look at its history, present and future, complete with talks by Baylor basketball coach Kim Mulkey, the Mayborn’s Crumpton and A.J. Armstrong biographer Scott Lewis on Feb. 6.

A man hauling cattle was killed when his truck and trailer overturned late Saturday night and led to second crash shortly after, authorities said.

The Mayborn Museum’s artifacts, including this prehistoric sea turtle skeleton, may find new settings or story-telling techniques in the museum’s long-range upgrade.

Visitors look over one of the natural and cultural history exhibits at the Mayborn.