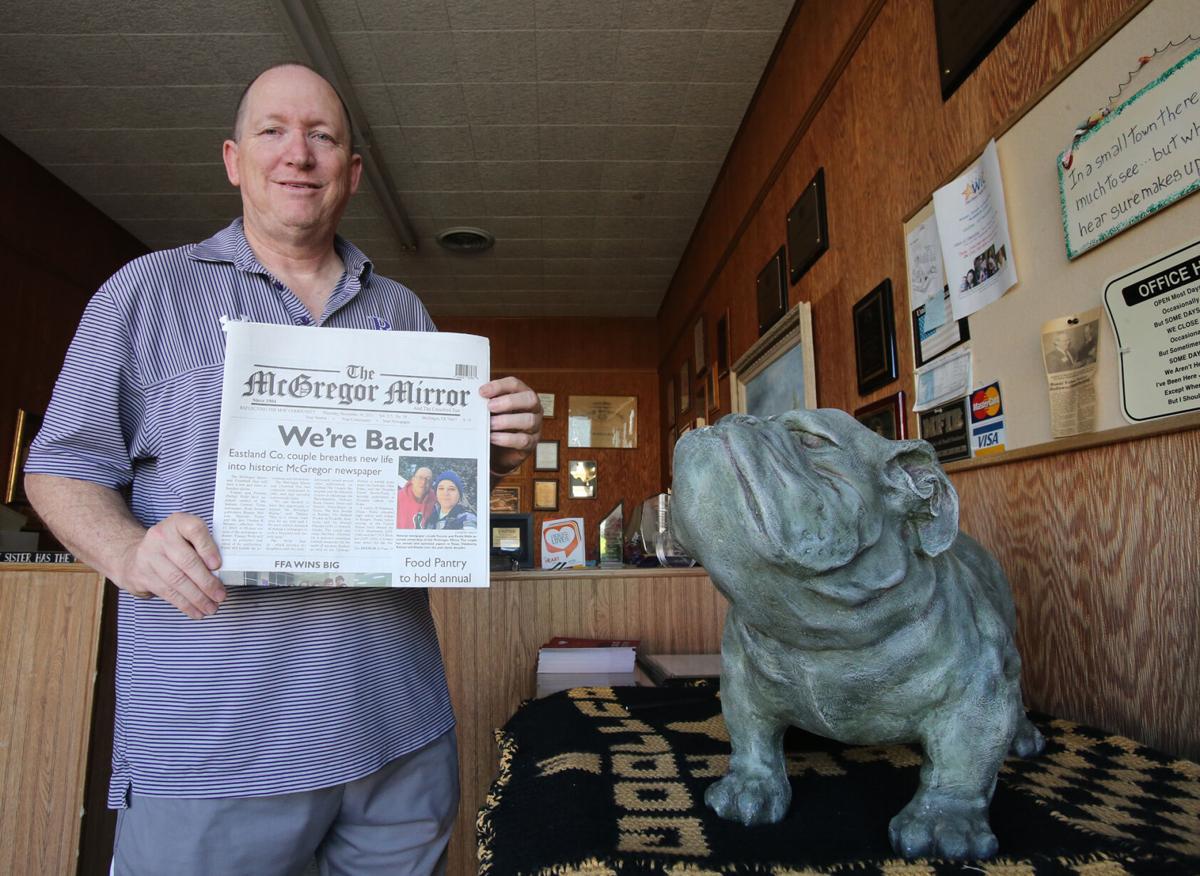 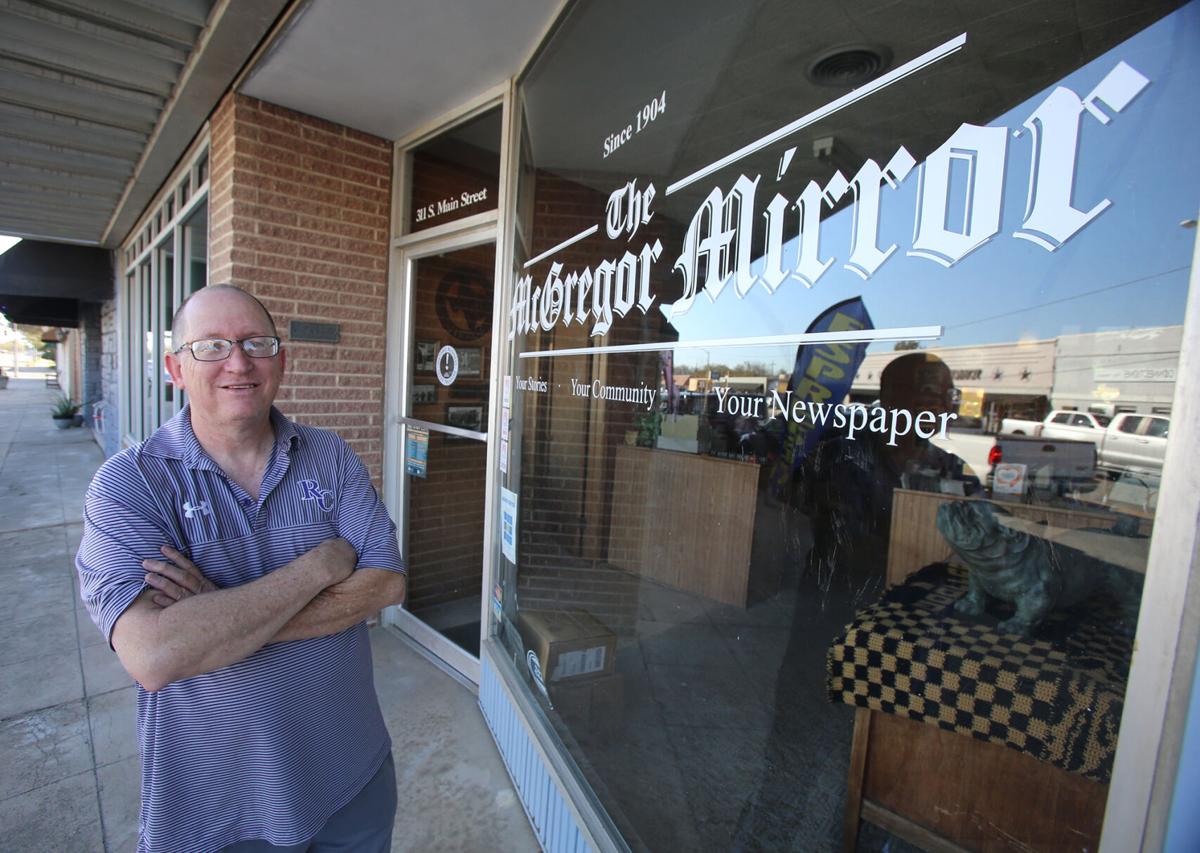 Tommy Wells stands outside of the Mirror's office on Main Street. 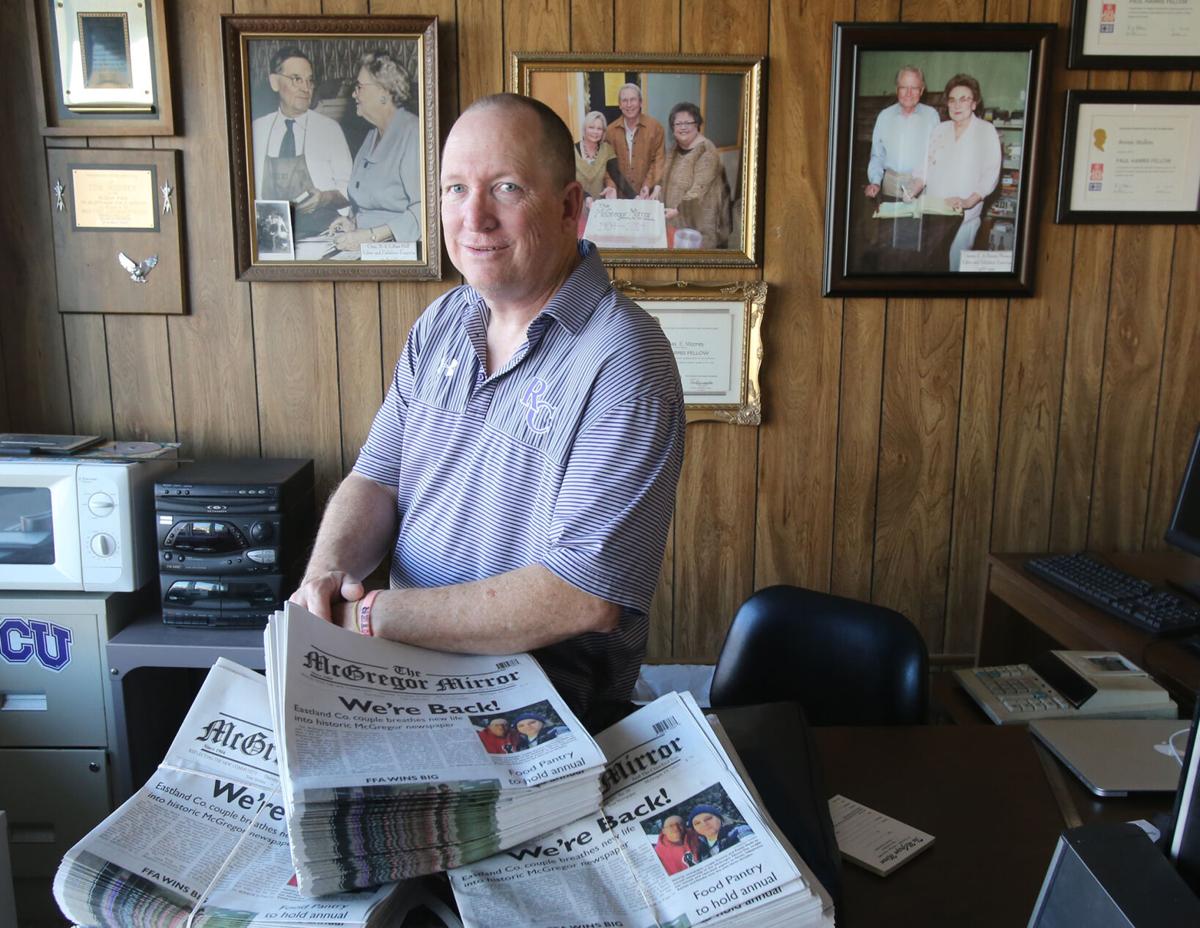 Tommy Wells, the new owner of the McGregor Mirror and Crawford Sun, stands in the office amid pictures of the family-owned paper's former owners. Wells said adding a digital component to the newspaper is a top priority.

A married couple from Ranger, Texas with a long history of running small-town newspapers purchased the 117-year-old McGregor Mirror and Crawford Sun from its previous owner earlier this month, ensuring the family-owned paper will live on.

Tommy and Pattie Wells, who live in Eastland County and also own the Carnegie Herald in Carnegie, Oklahoma, bought the paper from Bonnie Mullens, one of the three-sibling team that ran the paper from 1992 to October 2021 when the paper closed. Wells said he plans to keep the paper itself more or less the same, but focus more on sports and possibly branch out into digital radio broadcasts.

“We live in a world now where immediacy is everything,” Wells said. “You can get everything at the touch of a finger, so we kind of have to make the newspaper that way too.”

Mullens’ family bought the paper in 1918, 14 years after it was founded. Her parents, Thomas and Bonnie Mooney, operated the paper until 1992. Mullens operated the paper alongside her siblings Charles Mooney and Mynette Taylor until Charles passed away earlier this year.

“We’re really excited,” Mullens said. “I think they’re going to do a great job for McGregor. I think his ideas are really innovative.”

Tommy grew up in Ranger, where he was “the worst student you ever saw at Ranger High School,” in his words. His English teacher, the school’s football coach Jackie Stephens, was determined to keep Tommy from dropping out. He knew his struggling student was a sports fanatic and suggested he start covering sports for the school’s paper.

“He had absolutely no reason at all to do that for me, other than just being a guy that cared,” he said.

Later, Stephens helped him get a job as a sports reporter for his hometown paper, the Ranger Times, at the age of 16.

“I just fell in love with it,” he said. “I was a little bitty kid with no voice, and suddenly I had this voice in the newspaper.”

In 1985 he met his eventual wife Pattie during halftime at a football game he was covering.

Tommy rose through the ranks, working at papers in Breckenridge, Mineral Wells and Russell, Kansas before he and Pattie moved to Alaska for two years. When Tommy started purchasing newspapers, Pattie, the more organized of the two, according to the couple, took over the day-to-day business side of the papers.

“I just got into it with him, because I enjoy working with him,” Pattie said. “I’m the one who does all the book work and all that, because getting Tommy to do any of it would have been really funny.”

He started working as the sports information director for Ranger College, fully expecting to settle into the job and leave news behind. Before long he started volunteering as a sports reporter for Eastland County Today.

“It’s in my hometown, it’s the college I went to, this is perfect,” Tommy said. “But once the newspaper gets in your blood, you want to do it.”

It wasn’t long before he heard the Carnegie Herald in Carnegie, Oklahoma, was for sale, and impulsively purchased it before ever visiting the city.

Eventually the couple would own the Granite Enterprise and Eldorado Courier in Oklahoma, the Throckmorton Tribune, Strawn News and Knox County News in Texas, the Erie Record in Erie, Kansas, the Seward Journal in Seward, Alaska and the Ballard News in Wickliffe County, Kentucky, all of which they purchased without visiting first. They later sold those papers.

Today, the Wells own the Carnegie Herald, the Dauphin Island Beach Press and the Mirror along with the magazines Six-Man Illustrated, Coast and SnowRider.

He said he also tried to buy a newspaper in St. Croix, but the deal fell through.

“Maybe next time,” he said.

When Wells bought the Democrat Reporter in Linden, Alabama in 2019, he said he didn’t realize the paper’s immediate former owner, Goodloe Sutton, had written an internationally infamous editorial calling for the Ku Klux Klan to ride through Washington D.C. earlier that year. He said he learned about the editorial on Fourth of July weekend when an Associated Press reporter called him for comment. The paper is not currently in operation.

“Well, it’s going to make a great chapter in a book someday,” he said.

In December Tommy plans to step down from his position at Ranger College and focus solely on the newspapers. The couple will begin hiring staff members in January.

Where does Donald Trump stand now?

The McGregor Mirror printed its final newspaper earlier this month, leaving another town without coverage that reflects the community.

Tommy Wells stands outside of the Mirror's office on Main Street.

Tommy Wells, the new owner of the McGregor Mirror and Crawford Sun, stands in the office amid pictures of the family-owned paper's former owners. Wells said adding a digital component to the newspaper is a top priority.