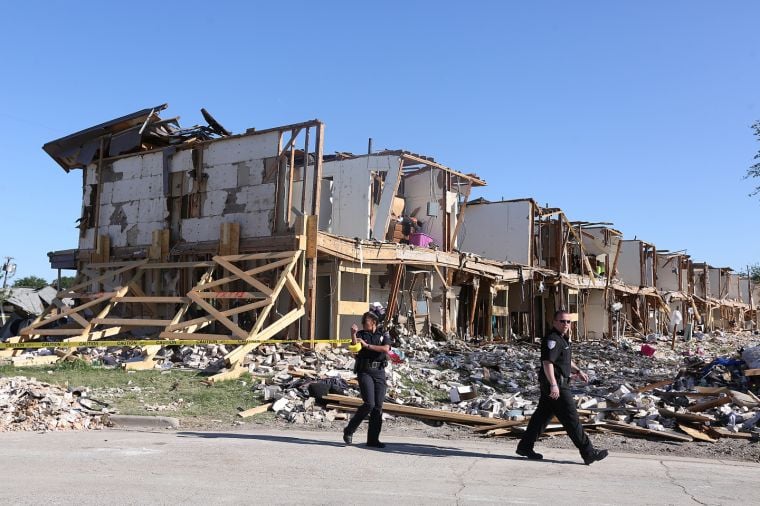 Police officers walk past the remains of an apartment complex demolished in the April 17 explosion of West Fertilizer Co. 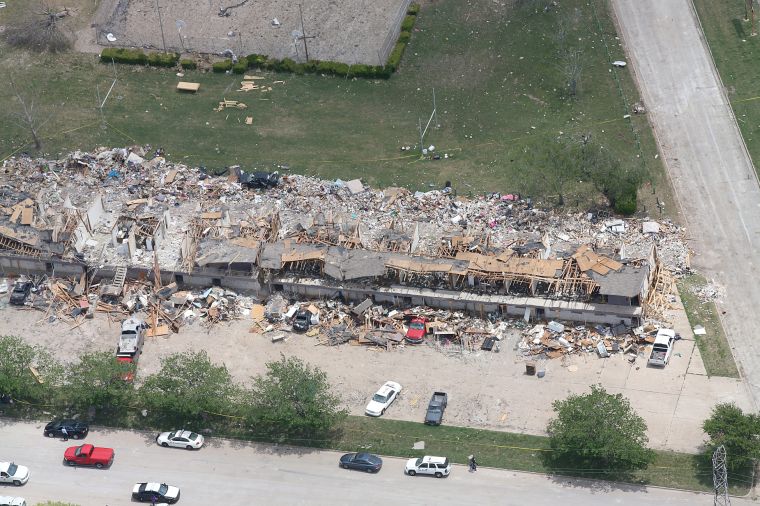 The April 17 explosion at West Fertilizer Co. demolished a two-story apartment complex owned by J&B Realty. The complex’s owners are suing the manufacturer of the chemicals that detonated that day.

Owners of the West apartment complex demolished in the April 17 West Fertilizer Co. explosion have filed a lawsuit against  the fertilizer manufacturer.

In the lawsuit, J&B Realty accuses CF Industries, based in Deerfield, Ill., of negligence in the design, manufacturing, marketing and selling of the ammonium nitrate stored at the plant because the company failed to use an additive that would have decreased the chance of explosion.

The lawsuit asks for compensation for the structural damage, as well as rental income lost since the building became uninhabitable, though the exact amount sought is not set.

“It’s premature at this point,” said Houston attorney Mo Aziz, who is representing J&B Realty along with attorney Chad Pinkerton. “We don’t know what their  final income loss is going to be.”

The building itself was worth about $320,000, according to the McLennan County Appraisal District. It had 22 units, including six one-bedroom units and  16 two-bedroom units, and was

at 95 percent occupancy at the time of the blast. J&B had owned it since 1979, the year it was built.

Two tenants lost their lives in the explosion, though the lawsuit is on behalf of J&B Realty only, not the families of the victims of the blast.

“CF Industries is sympathetic to those whose lives were affected by the unfortunate incident of April 17, 2013, in West, Texas,” CF Industries officials said in a statement.

They said the company thinks there is no basis for the lawsuits brought against it or its subsidiaries.

“The CF Industries’ companies will seek dismissal of the lawsuits and otherwise vigorously defend the company in court,” the statement said.

CF Industries also has been sued by the city of West, which makes claims similar to those in the J&B Realty lawsuit.

A tenant of the apartments also is suing to recover some of what she lost in the blast, though  CF Industries is not one of the defendants.

Misty Lambert was looking out the window of her apartment when the blast occurred, according to the lawsuit filed July 12 against Adair Grain.

She was severely injured and airlifted to a Temple hospital, where she received about 1,000 stitches in her chest, arms and face, according to the lawsuit.

A preliminary autopsy sheds some light on what happened during a one-car crash that killed a Hewitt man last week, but questions remain.

Robinson police to seek more than smell for marijuana searches

Two years after the legalization of hemp in Texas, the Robinson Police Department has decided officers will no longer use smell alone as proba…

Waco woman sentenced to 8 years in prison in 2018 robbery, standoff

The Waco Police Department has arrested a Waco-area man on warrants charging that he assaulted multiple women, including one who was pregnant,…

Police officers walk past the remains of an apartment complex demolished in the April 17 explosion of West Fertilizer Co.

The April 17 explosion at West Fertilizer Co. demolished a two-story apartment complex owned by J&B Realty. The complex’s owners are suing the manufacturer of the chemicals that detonated that day.