Packers vs. Rams: Follow the latest scores and updates from the NFL playoffs 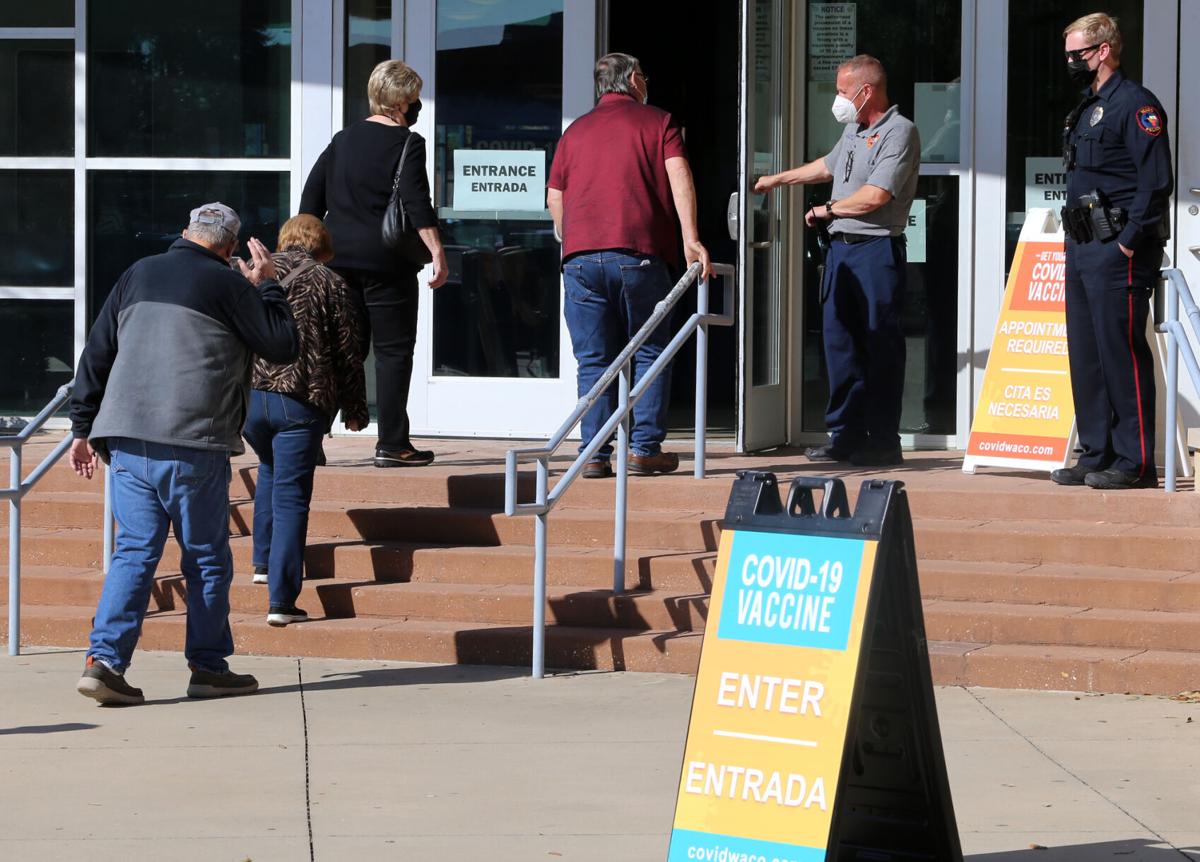 People head into the Waco Convention Center for the public health district's first large-scale COVID-19 vaccination effort open to the public, which will continue through Thursday. When signups opened Sunday afternoon, all 1,500 spots were full in less than an hour. 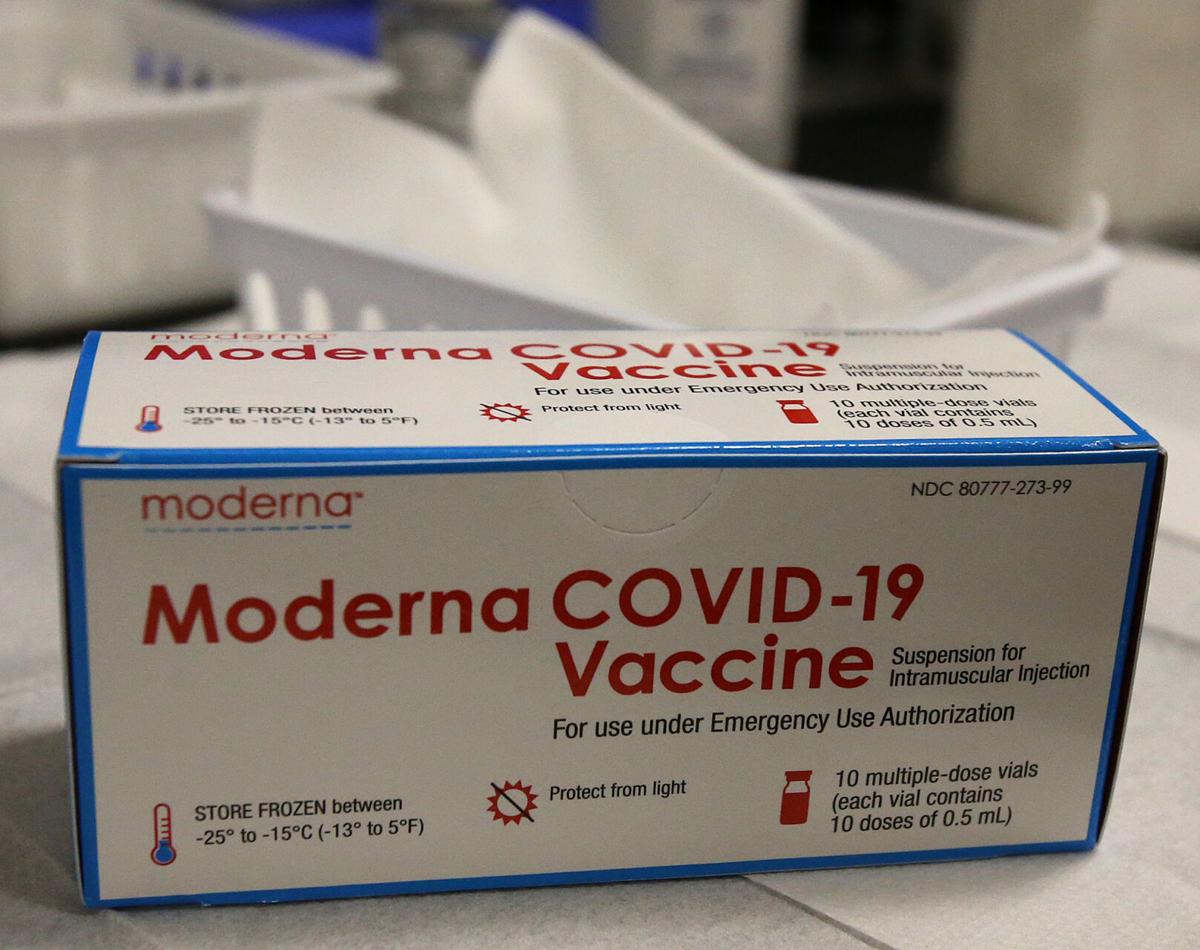 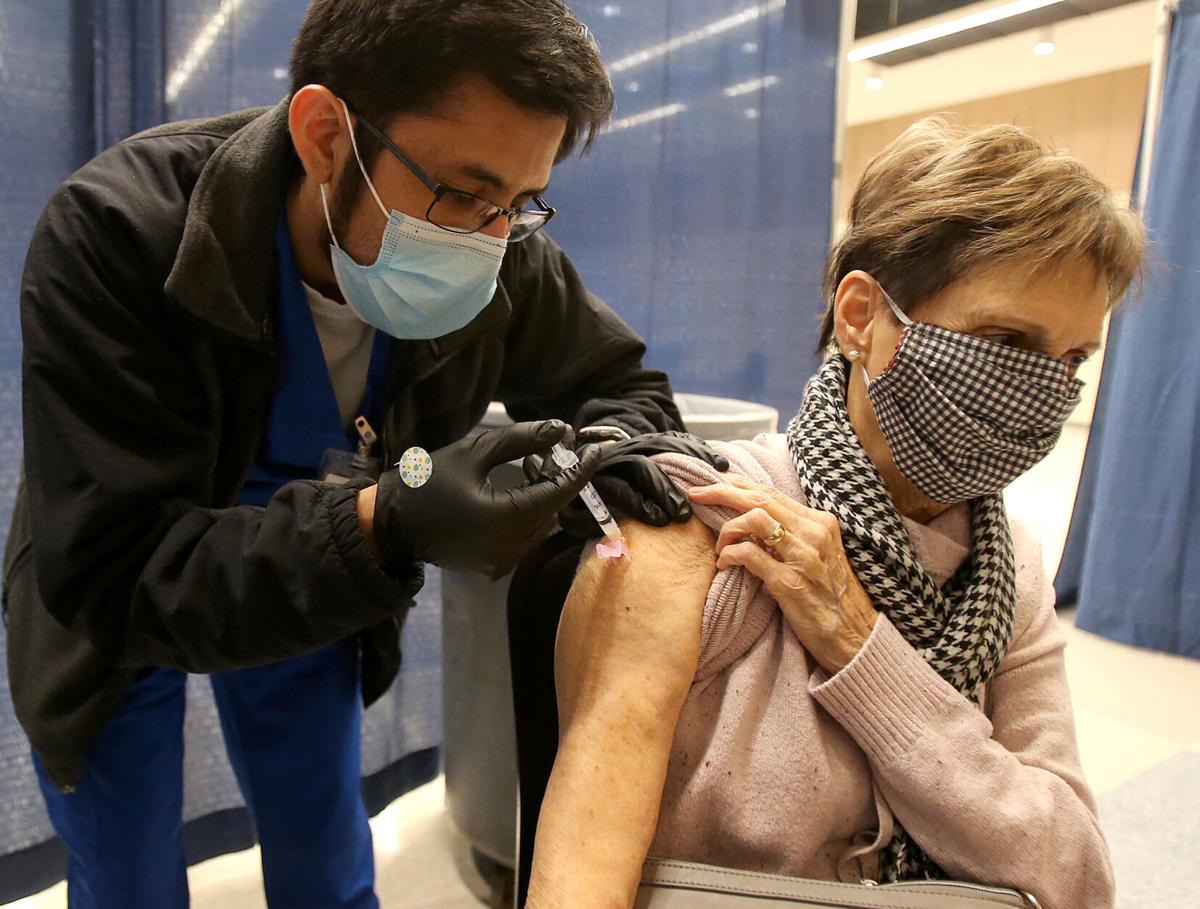 MCC nursing student Enrique Matos gives a COVID-19 vaccination to a McLennan County resident Tuesday in the Waco Convention Center. The public health district clinic administered 424 doses Tuesday and is expected to administer all of its 1,500-dose supply by Thursday. 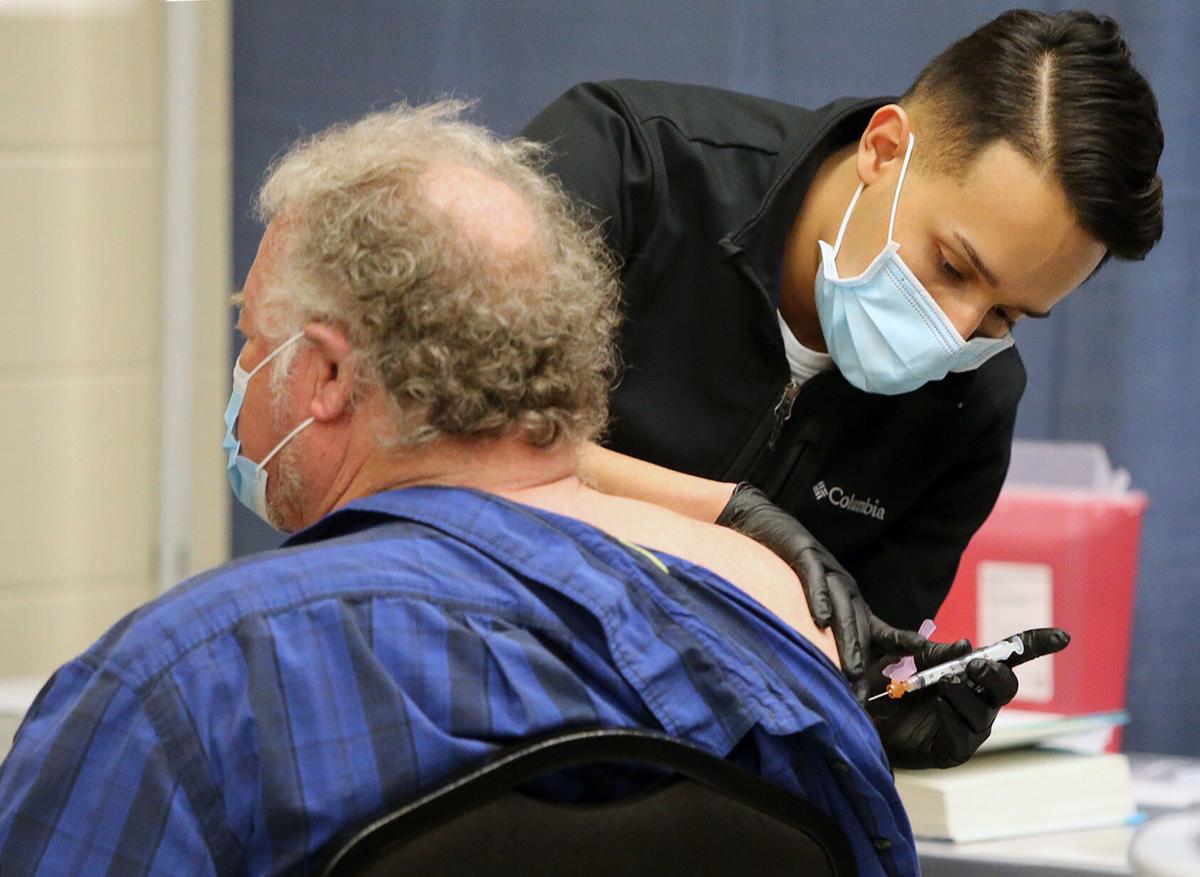 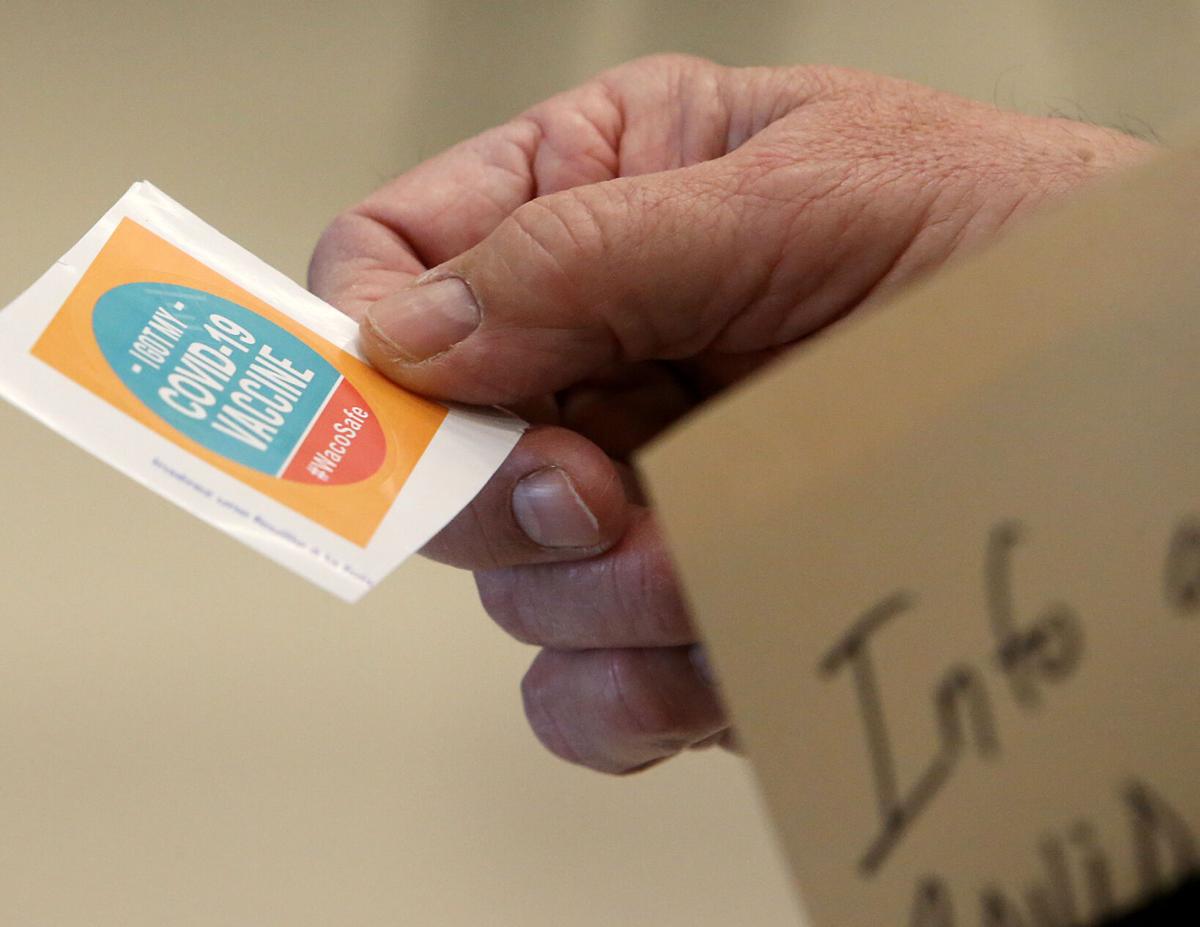 Stickers went out to vaccine recipients during Tuesday's clinic. 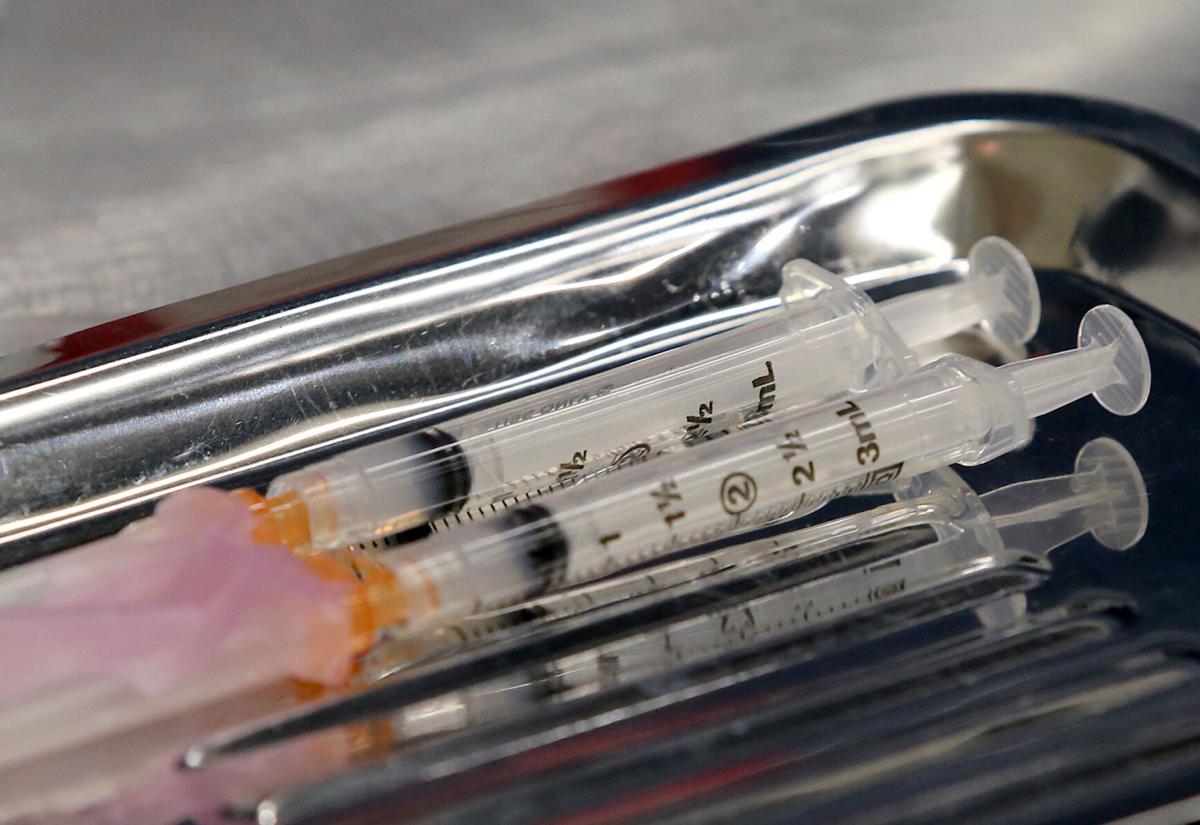 Syringes filled with the COVID-19 vaccine sit ready for use during Tuesday's public clinic.

The clinic will administer 1,500 vaccinations as it continues through Thursday at the Waco Convention Center. All the available doses were called for less than half an hour after the Waco-McLennan County Public Health District opened up registration Sunday afternoon. Recipients showed up for their staggered appointment times Tuesday and made their way through a queue spread through multiple rooms to prevent crowding. After getting the shot, they took a seat and waited 15 minutes in case of any side-effects. Volunteers from McLennan Community College’s nursing school, the Waco Family Health Center and Waco Fire Department helped run the clinic.

The public health district reported 467 new COVID-19 cases Tuesday, though 153 were cases from previous weeks that had gone unreported. The remaining 314 cases mark a new record for cases reported in a single day and bring the number of active cases to 1,305. The overall total stands at 21,296 McLennan County residents who have tested positive for COIVD-19.

There were a record 181 COVID-19 patients hospitalized in the county Tuesday, including 23 on ventilators and 108 who are McLennan County residents.

The health district also announced four more residents of the county have died because of the disease, bringing the death toll to 315. The four whose deaths were announced Tuesday range in age from 56 to 108.

While the ongoing vaccination clinic is booked solid, another will start as soon as the health district receives another shipment of vaccines, spokesperson Kelly Craine said. The health district expects to have about 24 hours of notice before the next shipment comes, and will give vaccine hopefuls 24 hours’ notice that registration will reopen.

Before registration for the current clinic opened Sunday, the city’s information technology department spent Saturday setting up the registration system and trying to ensure the website would not crash, something that happened in other counties, Craine said.

“In Harris County their website crashed and their phone lines crashed,” she said. “I didn’t think phone lines could crash anymore. San Antonio was out in like nine minutes.”

One of the few people who called the health district to register over the phone, rather than online, had to do so because their house lost power during Sunday’s snow storm.

“We had call center people ready to go for the entire day, from noon to 6,” Craine said. “It took 25 minutes.”

More than 5,000 people signed up for email notifications by texting “vaccine” to 22828 and providing an email address to be notified of the next shipment of vaccines. Craine said that system quickly became overwhelmed, and the public health district will use other outreach methods for the next round.

On Tuesday the city activated a public information hotline at 750-5606. Callers can select English or Spanish and get updates, including the information about testing and vaccine availability listed at covidwaco.com. When the next shipment of vaccines comes, the hotline will direct callers to another phone line where they can register.

Waco City Council Member Andrea Barefield was among the vaccine recipients Tuesday, posting a live video to Facebook. Barefield said she falls under phase 1B of the state’s vaccination plan because of an underlying medical condition, and signed up when she saw a notification from the health district.

“We did only have 1,500, but there are more coming and they (the public health district) are working on setting up sites in the coming weeks,” Barefield said. “There’s 250,000 folks in the county, and we’re going to do our best to get 250,000 folks vaccinated. We want to make it so everybody who wants one can get theirs.”

Multiple people receiving the vaccine at the clinic requested to remain anonymous, including one from Kyle, who said he found out about the Waco clinic from a family member who lives in the city.

One recipient, a home health worker who has lived in Waco for 14 years, said she signed up when the public health district contacted her agency.

“This was sooner than I thought,” she said. “Originally we thought only people who work in a hospital or doctor’s clinic would be able to get it.”

Cameron Khouri, a 21-year-old Texas State Technical College student, was among the youngest to receive the vaccine Tuesday. He suffers from a coarctation of the aorta, a rare congenital condition that put him squarely in Phase 1B.

“I didn’t think I would be getting it this soon, less than a year after everything happened in March,” Khouri said. “But as soon as I found out they were giving vaccines I found out what category I was in.”

He said his mother saw the public health district’s post online and snagged him a spot.

“I definitely feel more relieved, and I’m excited to get the second round done,” Khouri said. “Of course, there are different strains and you never know. But I’m excited, and I wish more people would come out if they’re eligible to get it.”

Longtime Waco resident Sherry Heatherston said she and her husband signed up after he received a text notification. They are both over the age of 65, and have been social distancing for months now.

Heatherston said she only hopes getting the second dose will be as easy.

“I thought we would automatically get an appointment, but they don’t know really know when they’ll be available,” she said.

As of Tuesday, the state had recorded 4,969 people in McLennan County receiving the vaccine, including 567 who had received both doses. That data would not yet include shots given Tuesday.

People head into the Waco Convention Center for the public health district's first large-scale COVID-19 vaccination effort open to the public, which will continue through Thursday. When signups opened Sunday afternoon, all 1,500 spots were full in less than an hour.

MCC nursing student Enrique Matos gives a COVID-19 vaccination to a McLennan County resident Tuesday in the Waco Convention Center. The public health district clinic administered 424 doses Tuesday and is expected to administer all of its 1,500-dose supply by Thursday.

Stickers went out to vaccine recipients during Tuesday's clinic.

Syringes filled with the COVID-19 vaccine sit ready for use during Tuesday's public clinic.