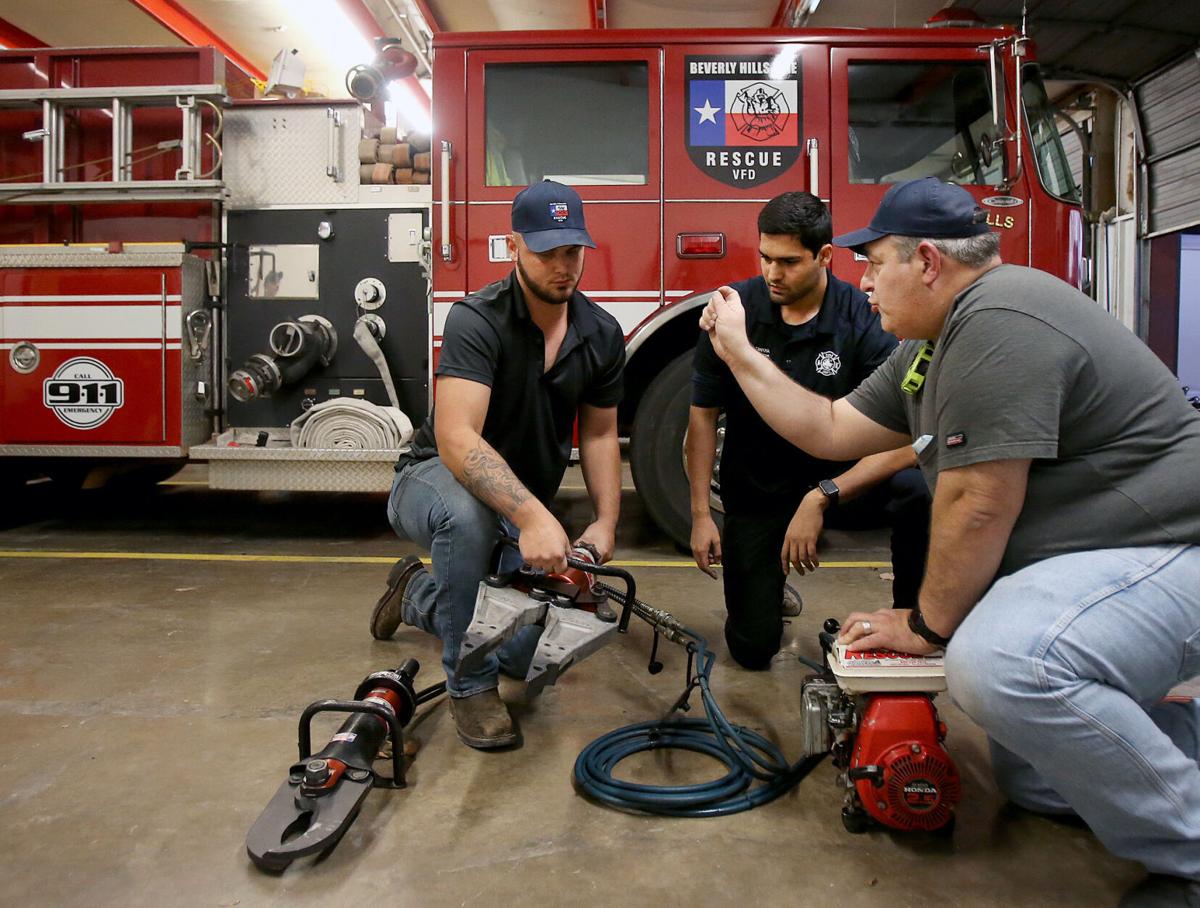 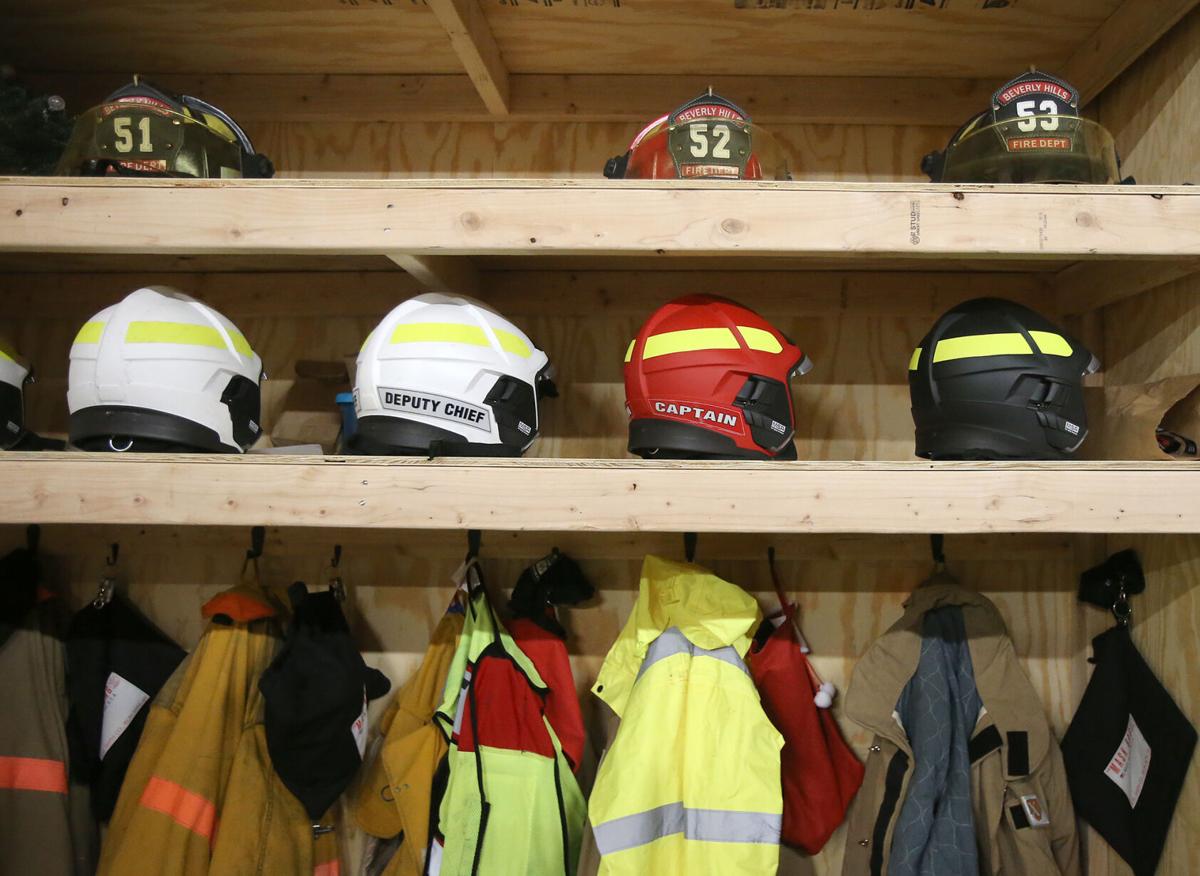 New and improved fire helmets (center shelf) replace more traditional looking helmets (above) for Beverly Hills volunteer firefighters. Other equipment is due to be replaced soon, and new equipment is needed for volunteers who recently joined the force. 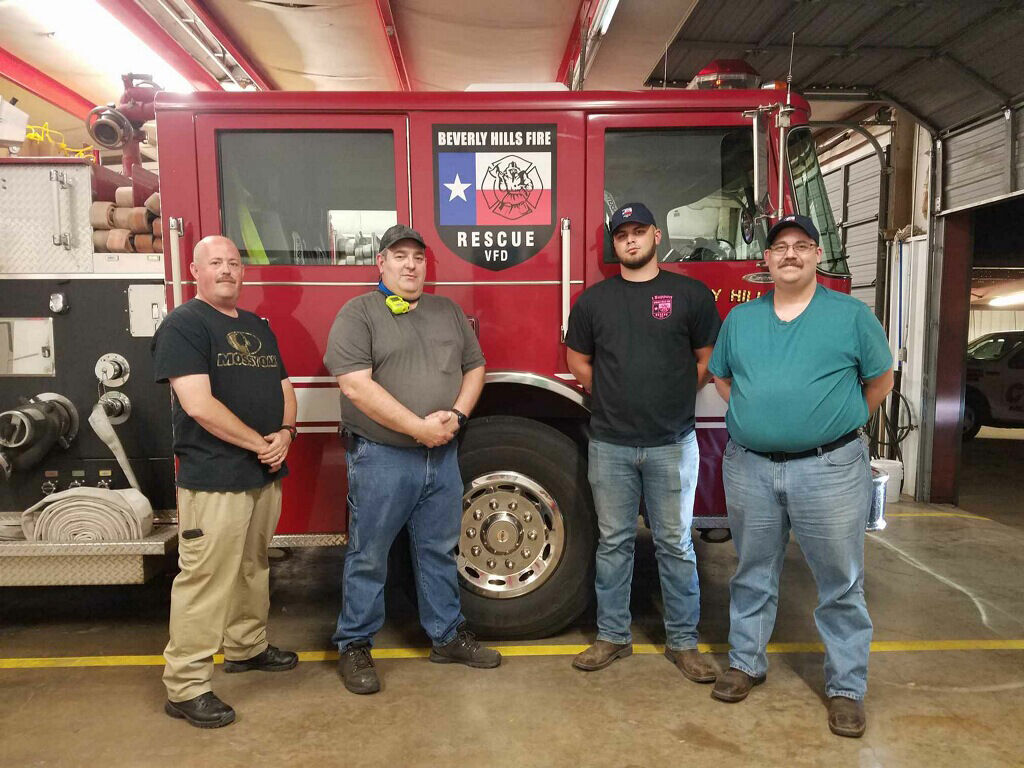 Brian Richard (from left), Jeff Wilhelm, Jacob Sefton and Jason Pinnick represent a third of Beverly Hills' firefighters. The department is holding a series of fundraisers to support expansion efforts. 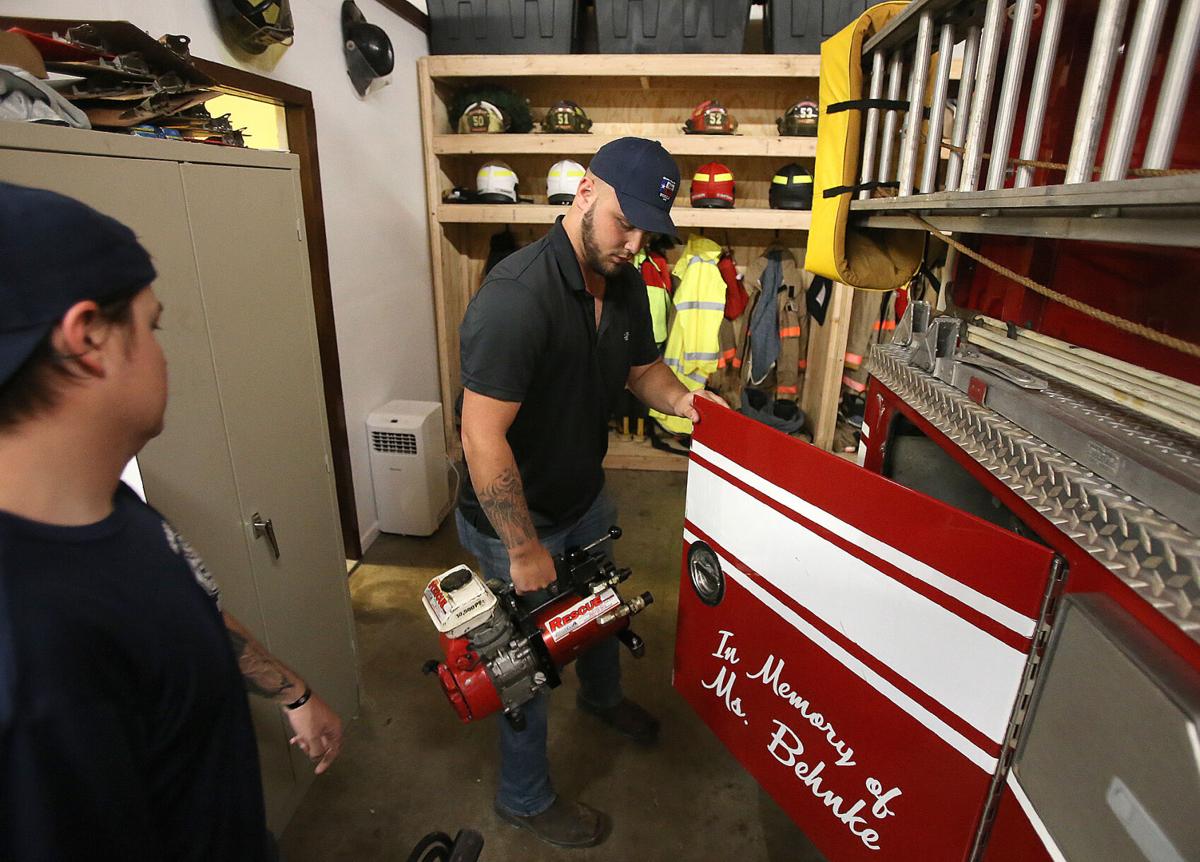 Beverly Hills volunteer firefighter Jacob Sefton puts a hydraulic pump back on a truck that bears the name of Annett Behnke, who left money to the department that allowed it to replace an aged truck. 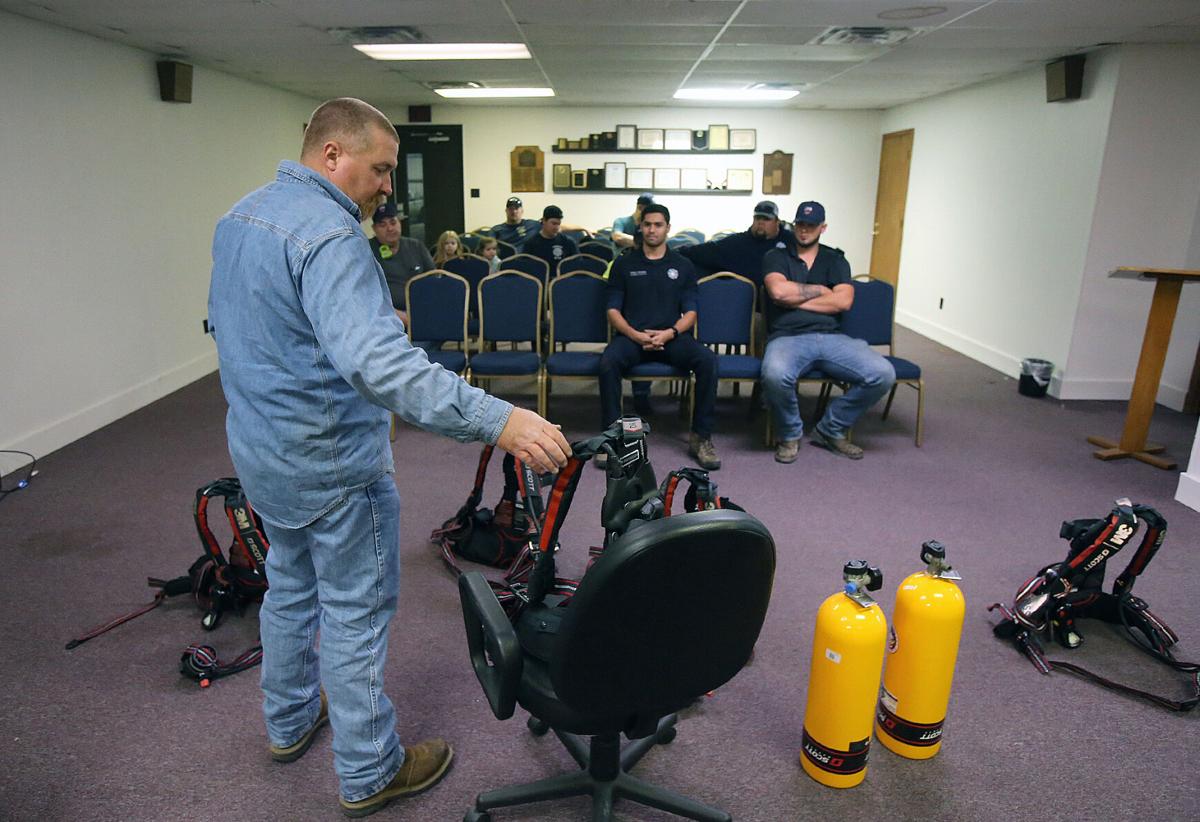 Beverly Hills’ volunteer fire department has launched its first fundraiser in more than 10 years in an effort to meet the growing department’s needs.

The Beverly Hills City Council voted last month to require the department to hold three fundraisers. Firefighters responded by starting to sell shirts, and volunteers will have a fill-the-bucket fundraiser from 9 a.m. to 5 p.m. Saturday at the corner of Valley Mills Drive and Memorial Drive, near the fire station.

“We basically looked at everything from the bottom up and trying to tweak everything,” Wilhelm said. “Not saying anything was wrong, but we’re just trying to make everything fit the current status of Beverly Hills the best.”

The shirts read “I Support Beverly Hills Fire Rescue VFD” in pink and cost $20, and the department is still planning its third fundraiser.

The department bought a much-needed new fire engine last year and retired and older vehicle after receiving a posthumous donation from Annett Behnke. The new engine bears her name.

Wilhelm, a professional Waco firefighter with 27 years of experience, said the department recently recruited two more members, bringing the total to 12, but the department lacks gear for the two newest members. Another eight members would improve the capacity to respond to calls.

“Obviously, the more responders we have the more gear we have to get,” Wilhelm said.

Jason Pinnick is among the station’s newest recruits. He worked as a volunteer firefighter in Santa Clara, California, and helped fight the Santana Row fire in 2002, a disastrous fire that spread from a partially built mall to surrounding buildings and burned for days. He joined a volunteer department in Harris County before moving to the Waco area.

He said it is difficult for volunteers to balance full-time jobs, personal lives and volunteering, but he has always felt called to do it. He has taken over compiling and organizing the fire department’s records.

“The station is in transition,” Pinnick said. “We’re trying to upgrade a lot of stuff to help the community.”

Jacob Sefton, 22, said he was inspired to join a volunteer fire department when he was growing up in Wisconsin, after a close friend’s father became a fire chief. He joined the Army in 2016 and was stationed at Fort Hood until recently.

“I grew up in a really small town and that was different. We didn’t have Waco right there,” Sefton said. “The closest town was 45 miles away. Other than that there were just villages. If we had a fire, usually barn fires … they’d all come together for one fire. It was a little bit of a different atmosphere, but just like here everyone looks out for each other.”

Sefton said between the growing department and the aging equipment, there is a clear need for more fire gear. A message written on the whiteboard in their firehouse reminds volunteers that the department is in the process of getting new gear, and to quit griping.

“It’s coming together,” Sefton said. “People are starting to realize we’re just getting the stuff as we can.”

Equipment for one volunteer costs about $2,000 and has to be retired after 10 years according to safety guidelines, but old gear can be used for training. One year of service for the department’s six radios costs $300 apiece, and the devices themselves cost $7,000.

The department recently replaced helmets and replaced other protective gear about two years ago, but the department’s boots are nearing the 10-year mark.

Wilhelm said in his hometown of Louisville, Kentucky, volunteer departments were comparably huge, with multiple stations funded by city governments.

“When you got a call, you were basically fighting to get on the truck because there were so many people,” Wilhelm said. “It had to do with geography. We were such a big, populated area. Not like out here.”

He said the city of Beverly Hills has considered contracting with Waco Fire Department in the past, but the cost was always prohibitively high.

“We need more personnel there,” Wilhelm said. “That was updated by the county because of volunteer fire departments and the fact that they may not have those members there, especially at 2 o’clock between Christmas and New Year’s on a Monday.”

A parolee who deputies say was in possession of 290 grams of methamphetamine was indicted Thursday on enhanced first-degree felony charges.

The Waco area has a public vaccine hotline at 750-5606. Callers can select English or Spanish and get updates, including information about testing and vaccine availability.

New $9 million Paul Tyson Field could be ready by September

How to protect your information from identity theft

New and improved fire helmets (center shelf) replace more traditional looking helmets (above) for Beverly Hills volunteer firefighters. Other equipment is due to be replaced soon, and new equipment is needed for volunteers who recently joined the force.

Brian Richard (from left), Jeff Wilhelm, Jacob Sefton and Jason Pinnick represent a third of Beverly Hills' firefighters. The department is holding a series of fundraisers to support expansion efforts.

Beverly Hills volunteer firefighter Jacob Sefton puts a hydraulic pump back on a truck that bears the name of Annett Behnke, who left money to the department that allowed it to replace an aged truck.