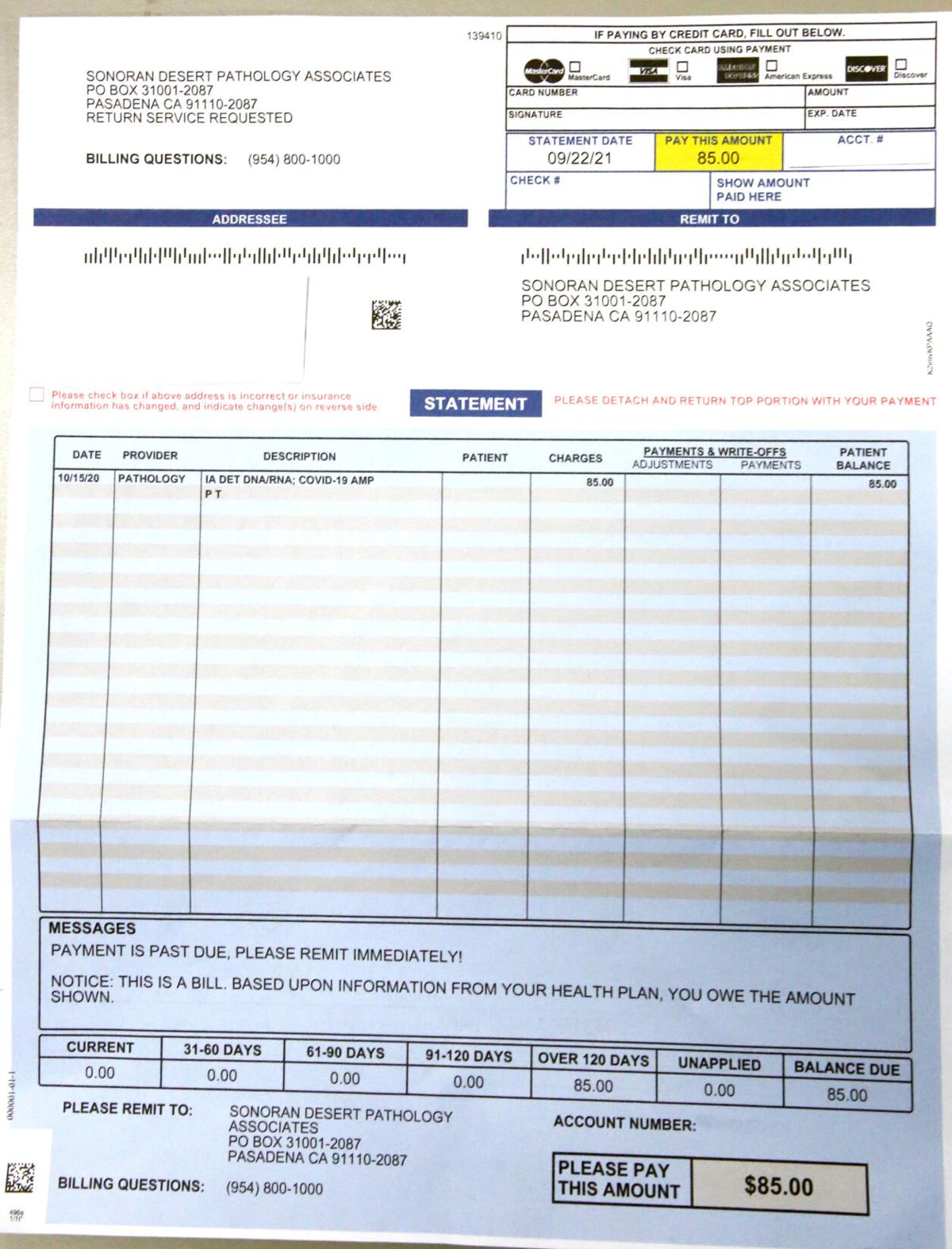 A Hewitt resident received this bill for a COVID-19 test conducted in October 2020. The billing company said it was sent to about 2,000 patients by mistake. Identifying information has been redacted from the bill. 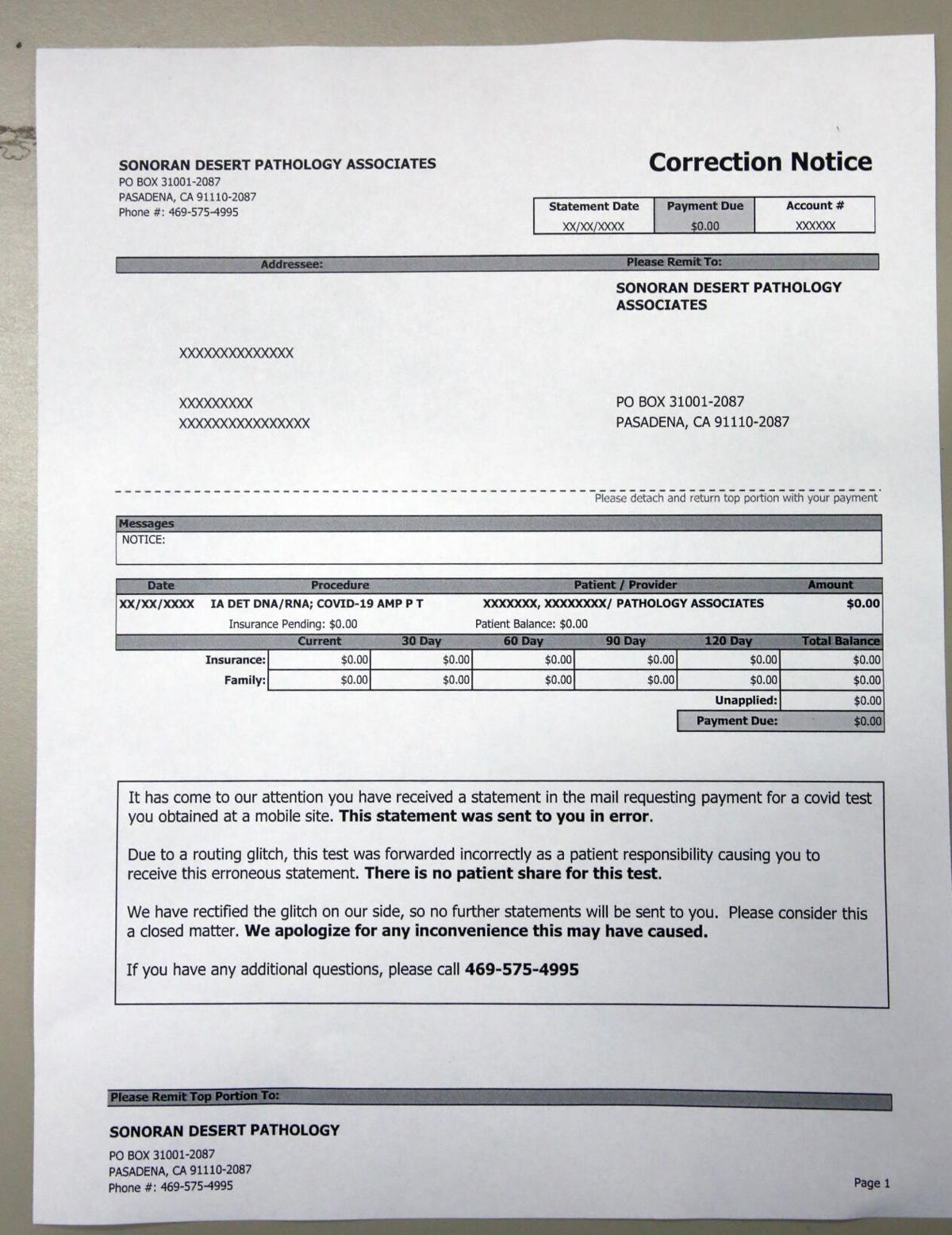 The California-based company whose third-party billing company billed erroneously for COVID-19 tests will be sending out versions of this letter to everyone who received $85 bills by mistake.

Company officials said a clerical error has led to about 2,000 people, including some in the Waco area, being sent an $85 bill for a free COVID-19 test administered a year ago.

Some who were tested in October last year at a free COVID-19 testing site set up under the auspices of the Waco-McLennan County Public Health District at McLennan Community College have reported receiving $85 bills from Sonoran Desert Pathology Associates, a test processing lab in Pasadena, California.

The billing was a mistake, and everyone who received a bill will be getting letters saying they owe nothing for the tests in coming days from the third-party billing company in Southlake, Texas, that mistakenly sent them out.

“There was a series of letters that went out to patients by mistake,” said Brett Walker, chief operating officer for Health Recon Connect, the billing company. “It was a clerical error. They were supposed to be billed to event organizers and patients were never supposed to get a bill. Only about a third went out before we caught the mistake and stopped it. Nothing was nefarious or anything like that.”

A Hewitt resident who contacted the Tribune-Herald said he was tested Oct. 15, 2020, at MCC at a clinic set up by the local health district. He was not asked if he had insurance, he said.

The bill he got says the $85 payment is past due and asks “please remit immediately!”

Dan Hurt, chief executive officer for Sonoran Desert Pathology, said he was unaware of the billing glitch until contacted Wednesday by the Tribune-Herald. He vowed to “get to the bottom of this” but said no one who was tested for COVID-19 at any of the public clinics last year owes anything for the procedures.

Later Wednesday, Walker sent a letter to the Tribune-Herald that he said will be sent to everyone who received the erroneous bills. It reads, in part: “It has come to our attention you have received a statement in the mail requesting payment for a covid test you obtained at a mobile site. This statement was sent to you in error. Due to a routing glitch, this test was forwarded incorrectly as a patient responsibility causing you to receive this erroneous statement. There is no patient share for this test. We have rectified the glitch on our side, so no further statements will be sent to you. Please consider this a closed matter. We apologize for any inconvenience this may have caused. If you have any additional questions, please call 469-575-4995.”

Kelly Craine, spokesperson for the Waco-McLennan County Public Health District, said her agency has not received a complaint from anyone who has gotten a bill so far. No one who was tested for COVID-19 last year should be billed, she said.

“There are more options now for people to get tested,” Craine said. “But in October 2020, this was the only option, and it was free.”

A Hewitt resident received this bill for a COVID-19 test conducted in October 2020. The billing company said it was sent to about 2,000 patients by mistake. Identifying information has been redacted from the bill.

The California-based company whose third-party billing company billed erroneously for COVID-19 tests will be sending out versions of this letter to everyone who received $85 bills by mistake.