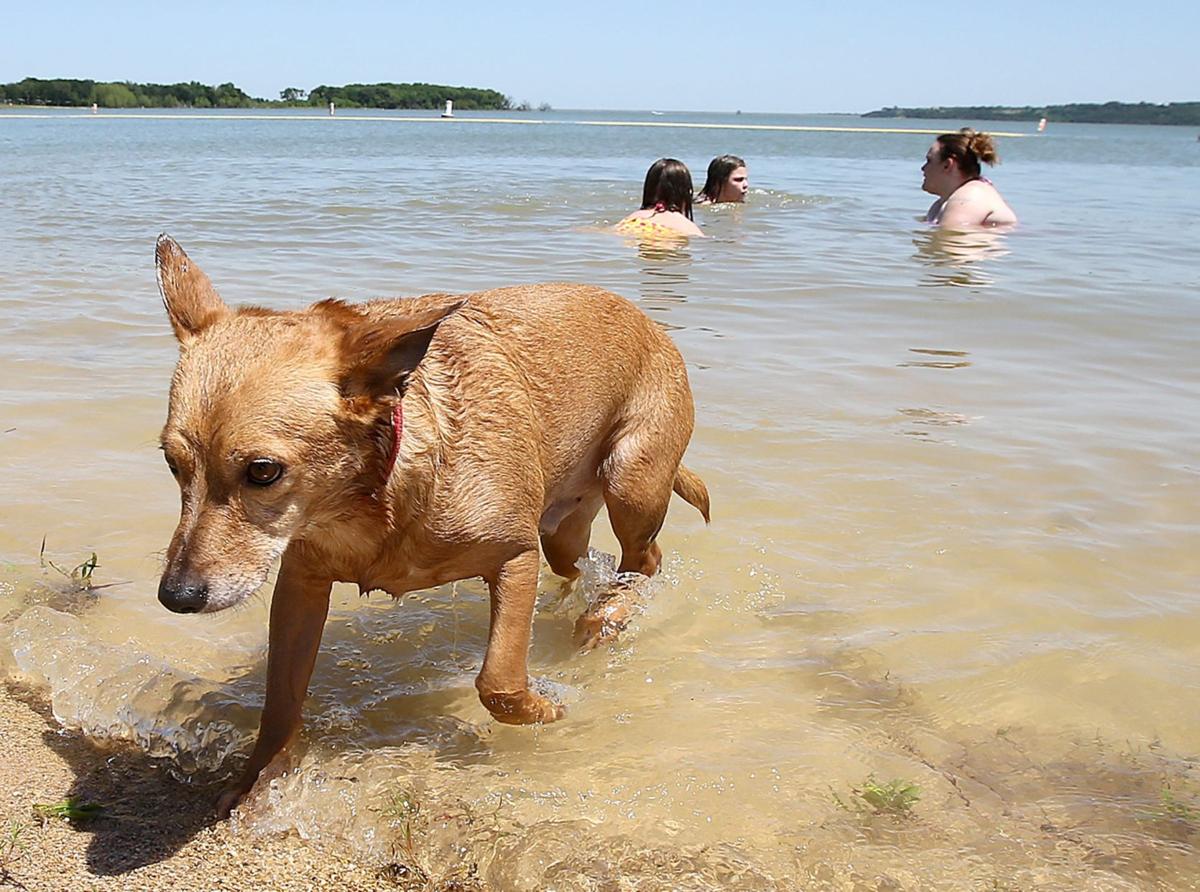 Tanner the dog heads back to shore after swimming in Lake Waco with his family on Saturday. Rains in the past week have lifted lake levels more than a foot above the normal elevation of 462 feet above sea level. 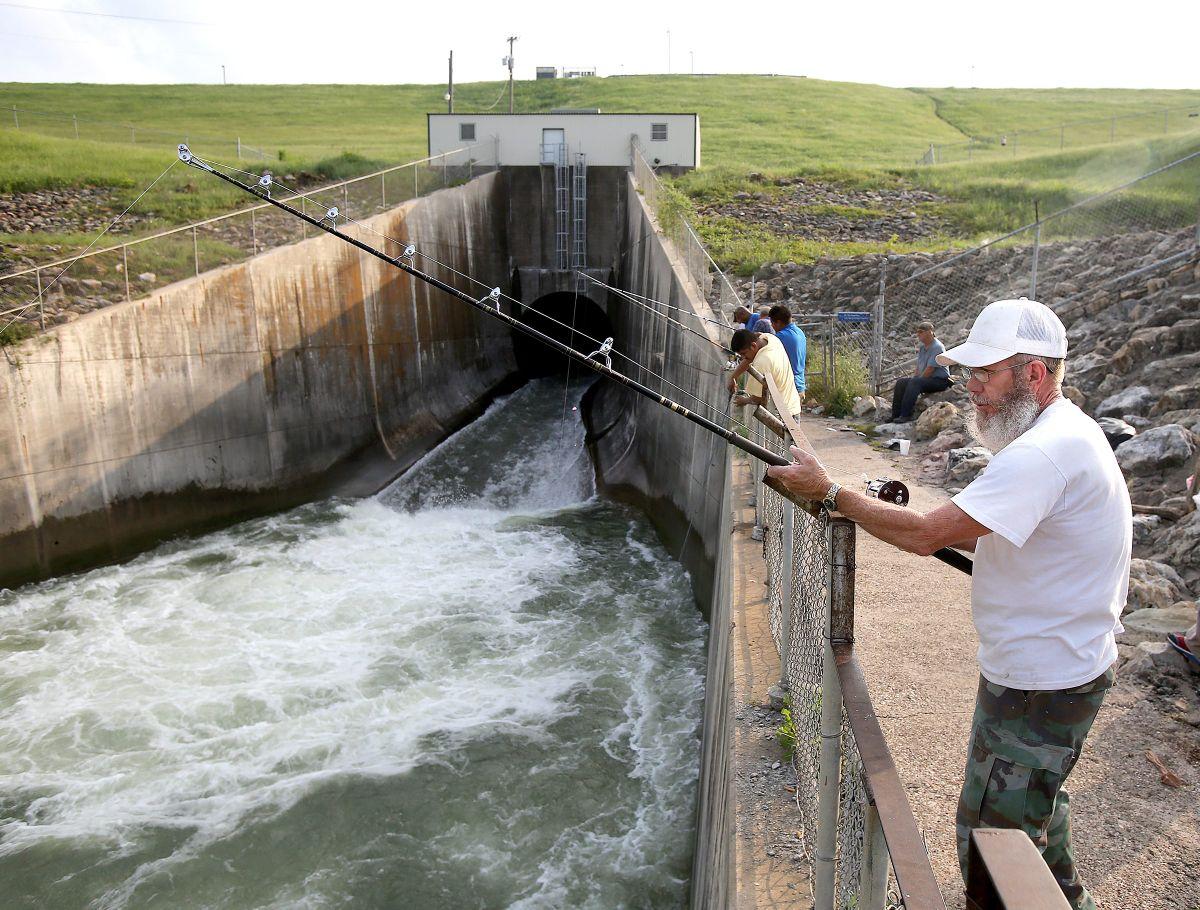 H.R. Tomlin fishes off the Lake Waco spillway as water is released into the Bosque River. Lake releases have been rare in recent years because of dry conditions.

Storms last week and early Monday have left water supplies in Waco and much of Central Texas in enviable shape for summer.

Lake Waco was a foot over its normal level Sunday even before a patchwork of strong thunderstorms dumped several inches of rain in parts of the North Bosque River watershed overnight. The flow in the river Monday could have raised the lake another foot if the floodgates weren’t releasing most of the water, said Tom Conry, Waco water quality program manager.

He said the overflowing lake bodes well for Waco’s water supply over the next few months.

“You always feel a lot better going into the summer with a full lake rather than half a lake,” Contry said.

The official rainfall at Waco Regional Airport on Monday was 0.41 inches, but unofficial gauges around the county showed up to two inches.

The National Weather Service showed rainfall totals of 11.9 inches for the year so far and 4.32 inches in April — nearly two inches above the monthly average.

Brad Brunett, water service manager for the Waco-based Brazos River Authority said areas around Glen Rose and Cleburne got six to eight inches, helping replenish the Brazos River and its reservoirs after several years of dry weather. One beneficiary is Lake Whitney, which has been down 8.66 feet and at less than 70 percent of its normal capacity.

“There’s a lot of inflow to Lake Whitney,” Brunett said. “It’s not going to fill it up, I don’t think, but it should come up 3 to 5 feet and be back 80-plus percent full.”

As a result, Brunett expects Lake Whitney to release more water downstream into the Brazos River. The water is typically released during hot times of the summer and used to generate electricity through a hydropower dam.

Brunett said Lake Granbury could be replenished completely with the rain of the past week, after suffering low levels during recent years. A busload of Granbury residents and officials attended the Brazos River Authority board meeting Monday morning to complain about the low levels.

Meanwhile, Lake Aquilla on Monday was at full capacity, while Lake Stillhouse Hollow was down 13.6 feet and Lake Belton was down 11 feet.

Brunett said that, in general, the eastern half of Texas has benefited this year from above-average rainfall that has greened up crops and filled reservoirs, while drought-stricken reservoirs in northwest Texas are recovering more slowly.

The good news, he said, is the El Niño weather pattern that has developed in the Pacific Ocean, causing climatologists to predict a Texas summer that is cooler and wetter than average.

The U.S. Drought Monitor last Thursday classified 34 percent of Texas as still being in moderate to exceptional drought, down from 69 percent a year ago.

The western half of McLennan County was shown to be a mixture of “abnormally dry” and “moderate drought” on the drought map, but Brunett said he expects the rain will erase that status.

Brunett and Conry agreed that this wet spring will help protect against “water calls” that force upstream users to curtail their water use to ensure water for downstream water rights-holders.

Since the drought of 2011, Dow Chemical in Freeport has made three calls, most recently in summer 2013, when Waco leaders were told they had to release any water that came into Lake Waco.

To reduce the need for water calls, the Texas Commission on Environmental Quality has set up a “watermaster” program for the Brazos River basin.

Starting in June, Waco-based watermaster Molly Mohler will be in charge of monitoring water use throughout the Brazos basin and limiting it when water is short. Mohler was not able to be reached Monday.

Brunett said the rainfall this spring should decrease water demand while increasing supply, which should take some pressure off the watermaster in resolving water conflicts.

“This is going to be a good year for that program to start,” he said.

The National Weather Service forecast for the week called for 40 percent chance of rain Tuesday, with highs in the 60s and overnight lows in the 40s. No more rain is forecast for the rest of the week after Tuesday.

Wednesday’s weather is forecast to be sunny, with highs in the low 70s and Wednesday night lows in the upper 40s.

COVID: HOSPITALIZATIONS AT ALL TIME HIGH

Pelosi: More needs to be done after Biden's year

Pelosi: More needs to be done after Biden's year

Kylee Freeman, 7, of Bruceville-Eddy floats in the water of Lake Waco, where lake levels are higher than usual.

The Brazos River drains an area of Texas the size of Tennessee, but its once plentiful water is increasingly a flashpoint of conflict among co…

Tanner the dog heads back to shore after swimming in Lake Waco with his family on Saturday. Rains in the past week have lifted lake levels more than a foot above the normal elevation of 462 feet above sea level.

H.R. Tomlin fishes off the Lake Waco spillway as water is released into the Bosque River. Lake releases have been rare in recent years because of dry conditions.