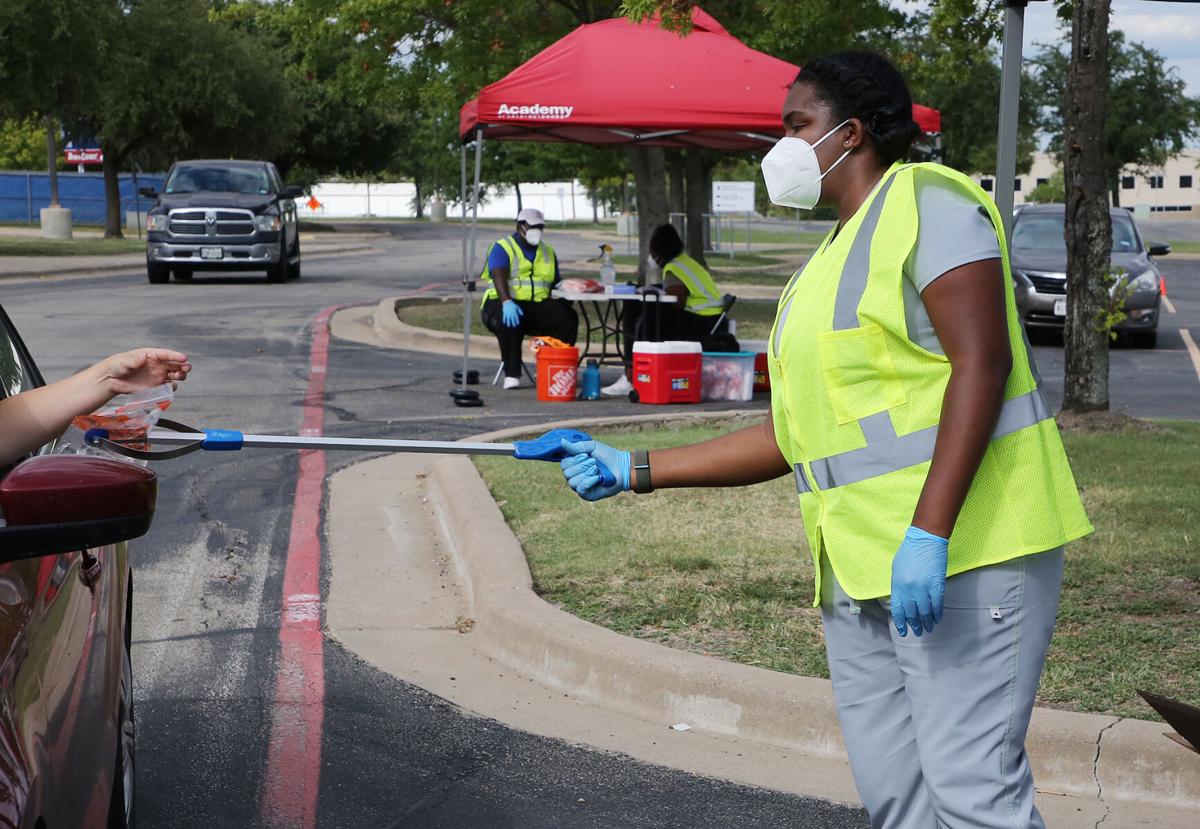 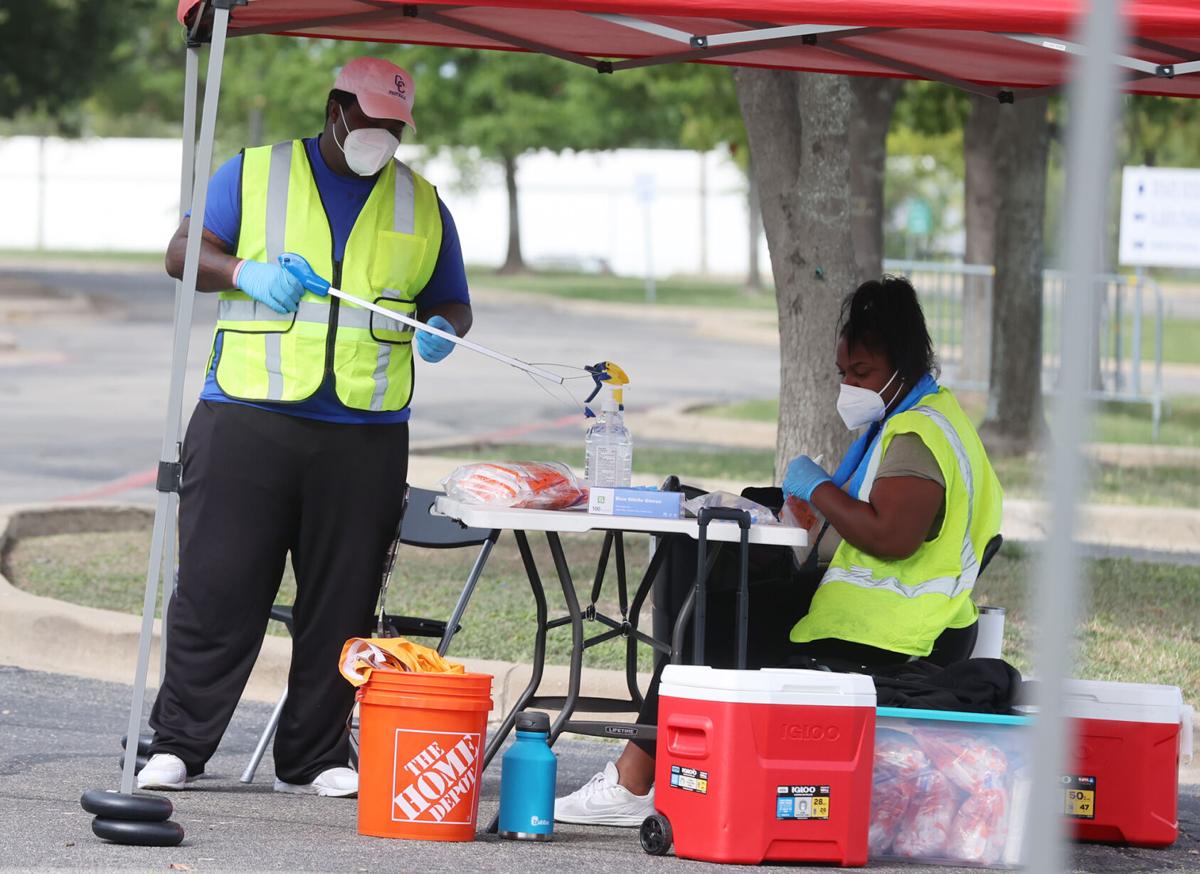 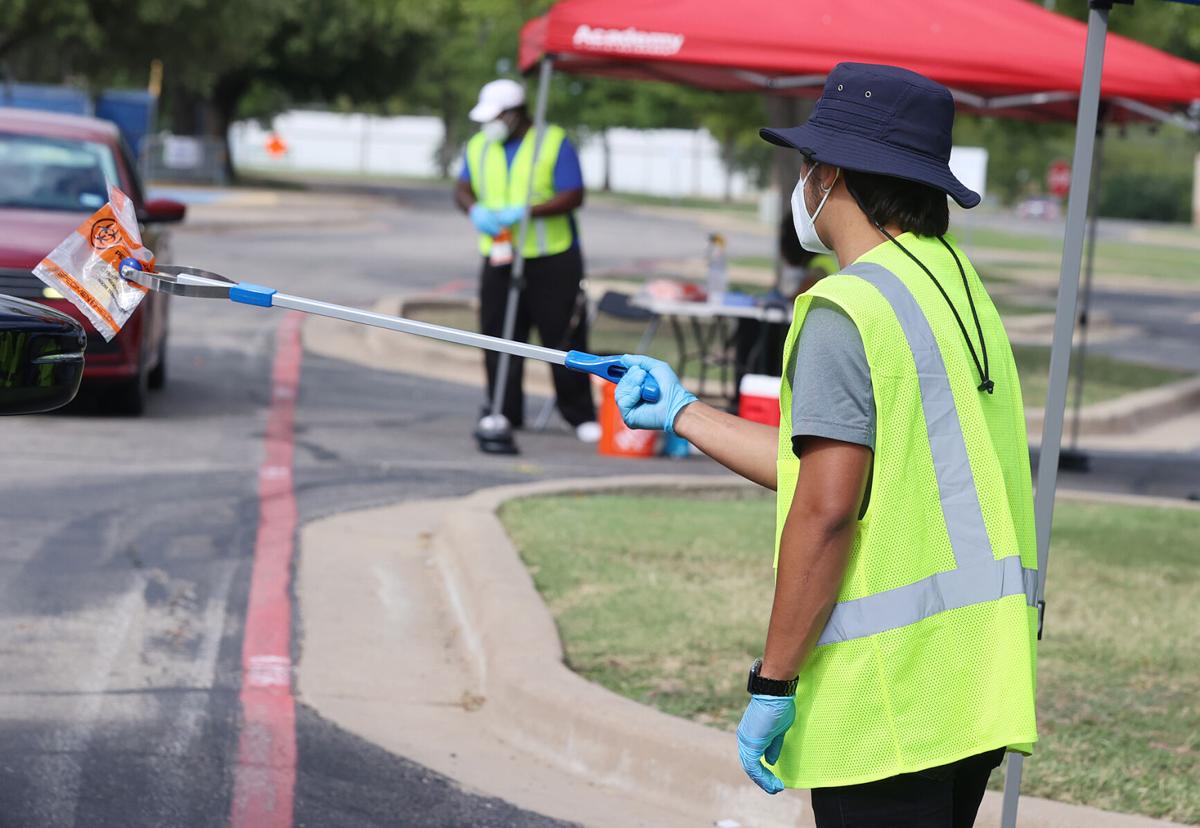 A Technician collects a test kit at a health district testing site outside Waco ISD Stadium on Wednesday. The health district has administered 4,822 tests since it resumed free testing almost four weeks ago. 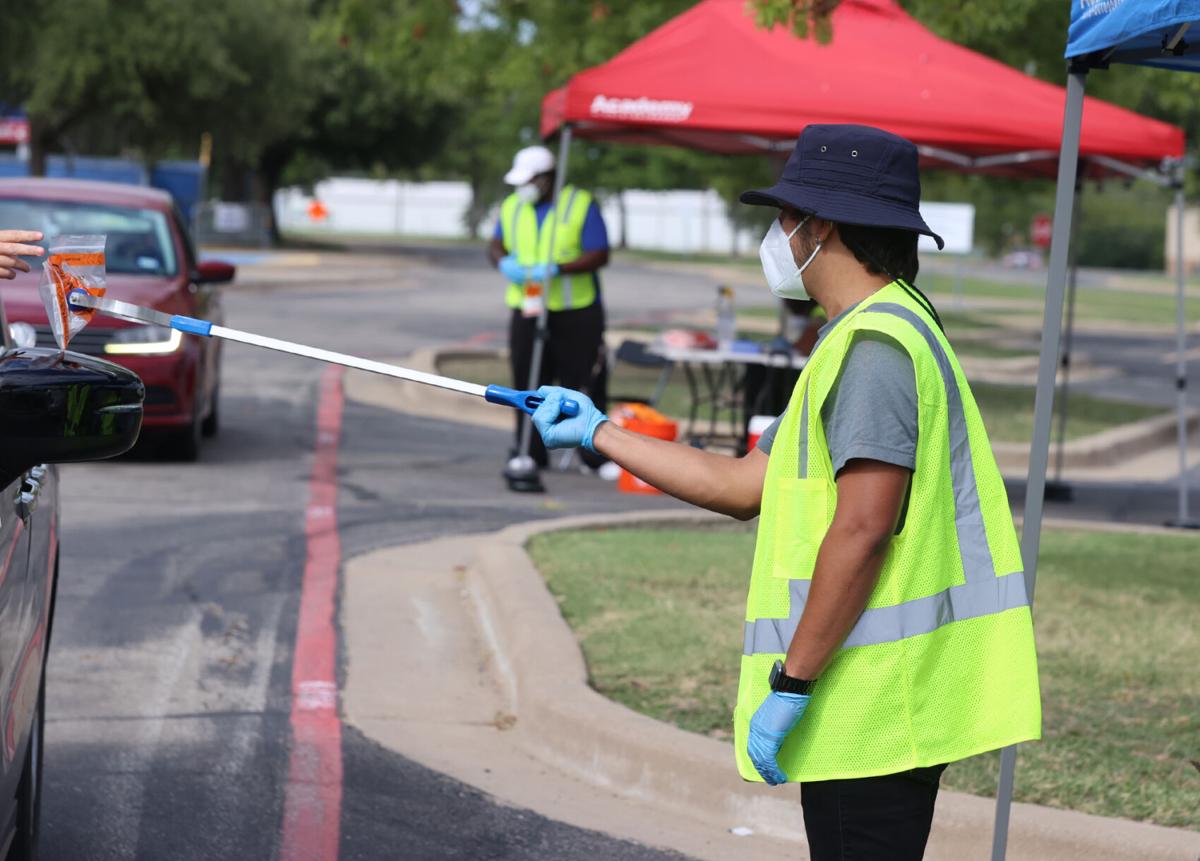 More people in McLennan County are taking COVID-19 tests and getting vaccinated than they were in July, but more of both are still needed to curb the area’s high case count and a level of COVID-19 hospitalizations taking a greater share of hospital space than anywhere else in the state.

Since the Waco-McLennan County Public Health District started offering free testing again Aug. 19, it has administered 4,822 tests. Including all local tests reported to the health district, an average of 869 tests per day were conducted last week, up 17% from a week earlier. The percentage of fully vaccinated county residents over the age of 12 has increased in the past four weeks from about 43% to a little more than 47%, according to the Texas Department of State Health Services. Statewide, about 59% of that age group is fully vaccinated, and nationwide about 63% are fully vaccinated.

The modest uptick in testing and vaccination has followed the area’s worst spike in cases and hospitalizations. As of Wednesday, Waco hospitals were treating 216 patients with COVID-19, a third-straight day with a new high in hospitalizations. In the five-county state trauma service area that includes McLennan County, COIVD-19 patients filled 38.4% of all staffed hospital beds, about 10 percentage points more than the next highest region.

Waco Family Medicine CEO Dr. Jackson Griggs said even considering at-home tests that do not get reported to the Texas Department of State Health Services, the number of tests per day is nowhere near high enough to help residents make a dent in the delta variant’s uninterrupted spread.

He said the percentage of tests that come back positive every week in McLennan County, called the positivity rate, is still too high. The seven-day average positivity rate has been higher than 10% since July 17 and sat at 17% as of Wednesday.

“We had a peak at the end of December that was higher, but it was brief,” Griggs said. “What I see now is this protracted high positivity rate that indicates we really have not responded as a community in a way that would protect (us) from spread.”

While the positivity rate has not matched the December peak, the daily average new case count has far surpassed previous peaks. The county has surpassed 300 new cases per day at least three times this month, on a rolling seven-day average, compared to a peak of 214 one day in early January, with only one other day before this summer at 200 or higher, according to covidwaco.com. The health district reported 200 new cases in the county Wednesday, bringing the active case count to 1,733.

Griggs said if roughly three times more people were getting tested every day, there would be a chance of more people realizing they are infected before they pass the virus along. He said now is a good time to seek out a test at the first sign of potential COVID-19 symptoms.

“Then, we can adequately advise community members to isolate if they are positive and to quarantine if they’ve been in close contact,” Griggs said. “Right now, the burden really falls on individual community members to know those protocols, but even then, how will they know to implement them if they only have mild symptoms?”

Pablo Ramos, vaccine clinic coordinator with the public health district, said the health district has been vaccinating about 1,000 people per week since demand jumped in early August, especially among local businesses that want to set up on-site employee clinics.

“They’re to the point where they’ve seen loved ones die and they’re like ‘OK, it’s time,’” Ramos said. “A lot of them are also doing it for the incentives the company’s given them.”

He said incentives have ranged from vacation time to cash, gift cards and pizza. He said he thinks the delta variant, combined with the fact that the Pfizer vaccine is now FDA-approved, rather than FDA-approved under emergency authorization, has driven more people to seek it out.

Ramos, a firefighter and paramedic, said he started out as part of a three-person team that scheduled mobile vaccine clinics aimed at reaching certain neighborhoods three or four times a week. He now works with a staff of 20 people that can run up to six mobile clinics a day.

He said he works full-time and then puts in another 35 to 45 hours for the public health district.

“It’s been a whirlwind, the last month and a half,” Ramos said. “I’ll tell you, that time away from the house, away from family … it’s been a lot. It’s been so rough.”

Ramos said as challenging as it can be, he is proud of his team and the difference they have been able to make.

Griggs said as tired as health care workers are, they are all people who signed up for the job and trained for the possibility of a health crisis. He said that is not true for the average person and their family, who never signed up for any of this.

“I think we’re all so tired of this pandemic that the temptation is to dismiss mild symptoms because none of us want to face the reality that we have to be locked up in our homes for another 10 days,” Griggs said. “But that fatigue doesn’t diminish the reality that we have community members who have COVID-19, and it’s spreading to neighbors and friends and family, and it’s proving lethal at higher numbers.”

Griggs said more and more responsibility has fallen on the average person over the course of the pandemic. The Texas Department of State Health Services ended its contact tracing program last month as the sheer number of cases made the process untenable, and before that the Texas Education Agency told school districts it would be up to parents to monitor their children for COVID-19 symptoms and keep them home.

“That’s been complicated by the degree of misinformation that’s been circulating and targeting individuals,” Griggs said. “Individuals may know they’re responsible to make prudent health decisions for themselves, but because there have been so many mixed messages they’ve been bombarded with they have difficulty deciphering what is scientifically true and accurate and what is hogwash.”

Griggs said the stress on doctors and hospital workers has not been helped by patients who try to request medications that will not treat their conditions. Requests for hydroxychloroquine have ebbed, but now patients are starting to request the parasite treatment ivermectin, neither of which have been shown to treat or prevent COVID-19.

“The fact that there are instances where patients are insisting that physicians provide treatment where the potential risks outweigh the potential benefits creates additional stress and challenge,” he said.

A Technician collects a test kit at a health district testing site outside Waco ISD Stadium on Wednesday. The health district has administered 4,822 tests since it resumed free testing almost four weeks ago.