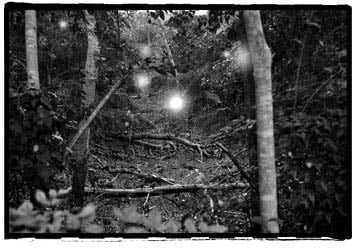 Ghostly orbs of light seem to dance wildly through the trees along trails at Cameron Park. 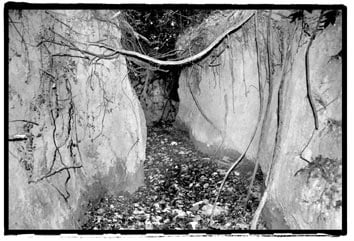 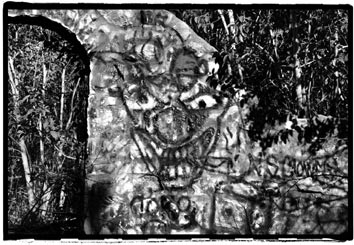 A sinister clown stares out from one of the ruins of an abandoned structure in Cameron Park, just the creepy sort of remnant that gives rise to tales of the Witch and her castle. 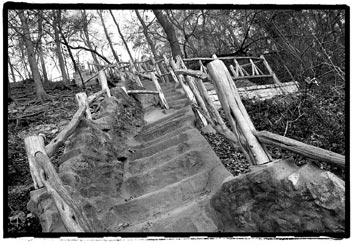 Already treacherous to climb if you aren’t careful of your footing, Jacob’s Ladder also is said to be haunted by a “grabbing ghost” who clutches at the garments of the living to break its fall.

By Terri Jo Ryan Special to the Tribune-Herald

With its gnarled trees, occasional mist, smells of decay and reputation for nocturnal mischief, Cameron Park is a naturally eerie locale, especially at night (aka the witching hour).

So is it any wonder that local lore collector Brad Turner found such rich pickings there for his macabre medley, the soon-to-be released, “Cotton Bales, Goatmen & Witches: Legends from the Heart of Texas”?

“When you look around here, you can ‘see’ anything that chills you to bone,” the author said on a recent tour of the vaunted woods after dark.

Indeed, through listening to the stories passed down about the century-old parkland from generations of its users, to the research he conducted into published mentions of the same, Turner has amassed an ethereal assembly of horrifying happenings almost as vast as the venerable forest’s 416 acres. It sounds nearly impossible to avoid an encounter of the frightening kind in a place so thoroughly saturated with spooks.

Readers of “Cotton Bales, Goatmen & Witches: Legends from the Heart of Texas,” for example, will learn why the park’s highest peak is known as Lovers Leap, why the seven sharp and most twisted turns of thoroughfares have came to be called The Seven Sisters, and why hikers claim the odor of death hovers over the wild wood.

Turner will share some of his tantalizing tales on the air this weekend, on the Big 95 KBGO’s morning show today and on Halloween morning, Monday.

One of the oldest Cameron Park legends on file at the Texas Collection in Carroll Library, one of Turners’ numerous sources, details the naming of Lindsay Hollow Road. The story goes that shortly after the Civil War, local ranchers captured two cattle thieves, the Lindsay brothers, chasing them through what is now known as Lindsay Hollow.

Both brothers were slain by the vigilantes, who, frightened of the consequences that would follow if townsfolk were to find out about the summary execution, buried the outlaws on the site. What is unsure is how they died, but the unsettled spirits of the unfortunate cowpokes are said to haunt the area.

Another hotspot for other-worldly activity in Cameron Park is the Witch’s Castle. Marked by the decrepit remnants of a stone archway and the remains of a house, the area is said to reek of decaying flesh. Screams, gasps and banging noises are said to accompany the stench.

There are several versions of the Witch at the black heart of the story. In some stories, Turner noted, she’s merely a reclusive old woman who tended to rely on “home remedies” or natural potions for curing illness.

In another telling of the tale, she’s a “half-breed” Indian mother who lost her only son to the cannons of World War I and went insane. Park visitors claim to hear mad chanting and screams in the area of the ruins of an old stone structure.

The darkest version of the story casts the witch as a Satan worshipper who sacrificed her own children to the devil before joining them in hell.

Her spirit is said to roam the woods, looking for more souls to steal.

A limestone rock formation called Lovers Leap overlooks the Bosque River and is the stage upon which one of the great melodramas of Waco’s “history” is cast.

The story goes that two young Native Americans from enemy tribes fell in love. They found themselves cornered by vengeful tribesmen and kinfolk on the limestone cliffs.

Rather than live without each other, they embraced in a death pact and jumped to their deaths.

Legend has it the pair can be glimpsed on the cliff when the Bosque River is running above its banks, and their romantic murmuring in the rush of its waters.

This more modern legend originated less than 40 years ago. The motorcycle tar pits trail downhill from Lovers Leap, and were a popular area for jumping motorcycles in the 1970s.

The origin of one ghost story is that a young man was killed riding his chopper at the pits. His bereaved mother came every day to the site to mourn her son’s death. Even after her own death decades later, she continues to visit.

People report hearing racing engines and a woman weeping. Some also say they see orbs moving through the trees near the cursed spot.

Jacob’s Ladder, one of the park’s greatest attractions, is an extremely steep set of steps climbing nearly 100 feet to the top of a bluff. Supposedly built more than a century ago by a family living at the top of the bluff, the aged structure is still usable because of its periodic renovations.

The ghostly activity dates back to the 1980s, according to the stories. If a couple climbs the ladder after dark, it is said, they will sometimes feel invisible hands pulling at their clothes. The woman is usually the first to feel the tugs of the “grabbing ghost.”

For more on the haunted happenings at Cameron Park and other scary locations around McLennan County collected by Turner, a science instructor at McLennan Community College, look for “Cotton Bales, Goatmen and Witches: Legends from the Heart of Texas.”

The volume will be released Nov. 22 through the publishing arm of Texas State Technical College-Waco, and is illustrated by photographer Mark Burdine.

The trails called Weber Run and Powder Monkey transport Cameron Park visitors to a Hill Country landscape in the middle of Waco. Hikers and cy…

Ghostly orbs of light seem to dance wildly through the trees along trails at Cameron Park.

A sinister clown stares out from one of the ruins of an abandoned structure in Cameron Park, just the creepy sort of remnant that gives rise to tales of the Witch and her castle.

Already treacherous to climb if you aren’t careful of your footing, Jacob’s Ladder also is said to be haunted by a “grabbing ghost” who clutches at the garments of the living to break its fall.