The 2020 pandemic has put a crimp in many holiday traditions — stampeding the stores, sitting on Santa’s lap, traveling to see relatives or huddling with crowds to sing carols.

But one tradition it has left unscathed is driving around with the household to look at over-the-top Christmas light displays.

Christmas light season seems destined to burn on brighter than ever this year as people try to limit their exposure to COVID-19. National news stories indicate Christmas lights and decorations are flying off the shelves. And in the Waco area some local families are going to great lengths to prepare for big crowds.

Starting this weekend through Jan. 5, Kevin and Michelle Hetherington are planning to create their biggest holiday extravaganza yet at their rural home at 330 Butler Lane off Highway 6 near Crawford.

“I’ve always loved Christmas lights, and every year this gets bigger and bigger,” said Kevin Hetherington, who owns a landscaping company. He said the couple has been working on the display since February.

The lighted display, now a decade old, will once again feature a field of lights synchronized by computer to holiday music, which visitors can hear on radios tuned to 95.5 FM. But this year will have about twice as many lights as last year — about 6 million, by Kevin Hetherington’s estimate. New features include a 32-foot Christmas tree with custom-programmed patterns that make it look like a volcano or a tree full of snowflakes.

There is also a new laser show projected on a 30-by-28-foot backboard featuring a flying eagle and a dancing Santa Claus. Hetherington had to get a permit from aviation authorities and an FBI background check to use the lasers.

Another new feature is a blue field of lights that appears to have a water drop rippling out from the center.

The computer programming required for the spectacle is immense, Hetherington said. This year he flew to Kansas with a set of blueprints to meet with a specialty firm for the show. A five-minute song might take a week of programming to choreograph, he said.

“There’s only a few people in the whole country who want to mess this this kind of stuff,” he said.

The display will include Santa as usual this year, but only walking around and greeting children through a car window.

Hetherington estimated last year’s display attracted 30,000 visitors and sometimes had waits of up to two hours. The show is free, but the couple asks for donations to benefit a charity, which is designated this year to be St. Jude Children’s Research Hospital. He said the family hopes to be able to match thousands of dollars in donations this year.

Miles away in the Harris Creek subdivision of West Highway 84, Roger and Lana Schmidt this week were putting the finishing touches on another landmark Christmas display. Their home at 20 Oak Creek Circle was a winner on ABC’s “The Great Christmas Light Fight” two years ago.

They scaled up the display last year and are scaling it back slightly this year, partly because they have less volunteer labor during the pandemic.

“We usually start in September,” said Roger Schmidt, an attorney and former Curves International executive. “Because of COVID we weren’t sure what we were going to do. We didn’t get going until the end of October, so we’re are about a month behind.”

With help from their 15-year-old daughter, Michelle, the Schmidts planned to get the display glowing by Sunday evening. It will include standbys such as holiday-themed cartoon tableaus, a “Frozen” movie homage and an exhibition of the 12 days of Christmas. Like the rest of the displays, it will be off-limits this year to pedestrians because of the pandemic threat.

He said he will miss seeing the crowds stroll though and the spontaneous singing of “The 12 Days of Christmas,” but the spirit will survive.

“I think that’s what it’s all about, bringing joy to people,” he said. “I hope it helps. I know a lot of people are housebound and not happy about it. Hopefully we can put some smiles on people’s faces.”

In the heart of Waco, another veteran of the Christmas light scene is forging ahead with her display despite a family tragedy.

At 28th Street and Proctor Avenue, Alice Tristan, 73, was packing every square inch of her small yard and carport with Christmas treasures, including light-up figurines and blow-up cartoon minions.

She will light it all up Tuesday, which is the birthday of her grandson, Anthony Paul Tristan, who recently died of a liver condition. She is dedicating this year’s display to him.

As usual, she will allow people to get out and walk through the display, though she will be wearing a mask and urges others to do so. She said the COVID-19 pandemic has upended everyone’s life, but she wanted to make sure one thing went on as usual.

“I used to gamble, go to Bingo, eat at restaurants,” she said. “I don’t do none of them anymore. I just stay here and work on the house.” 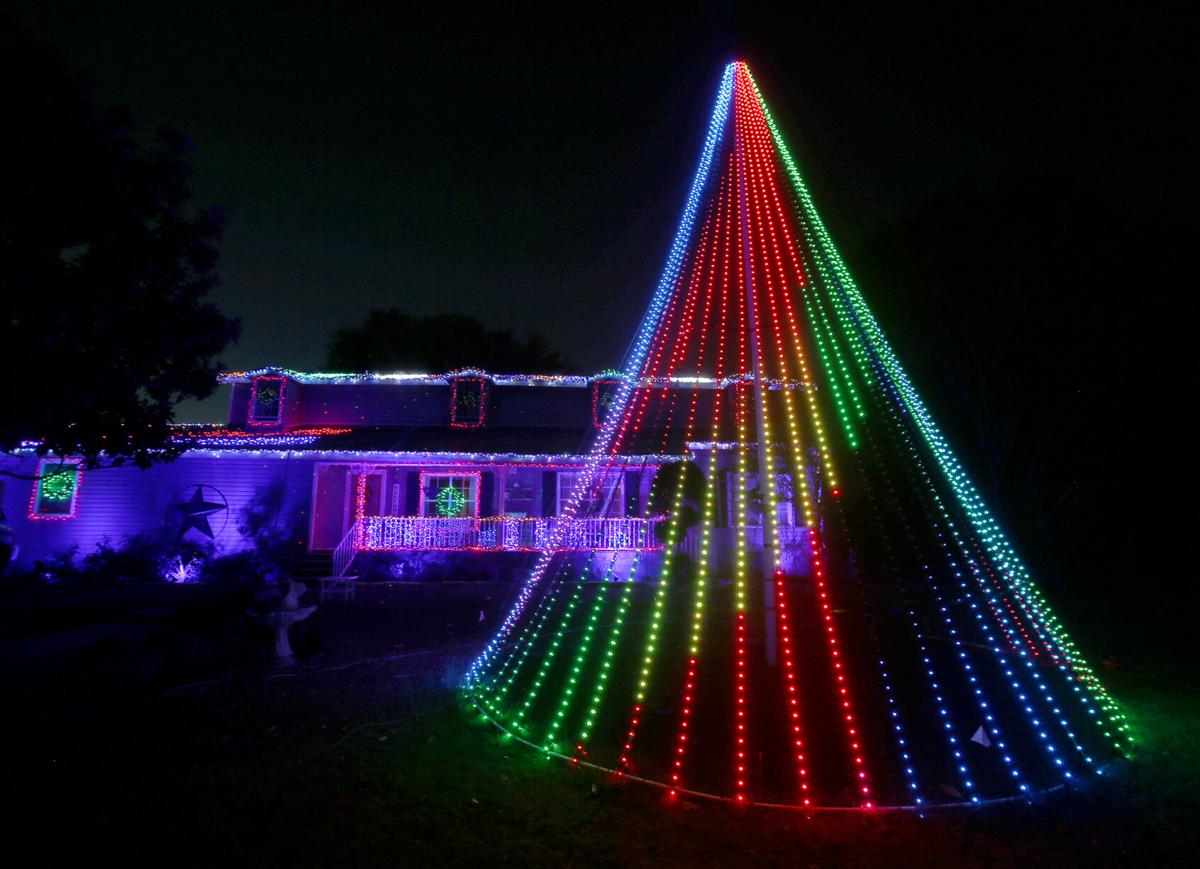 A computer-controlled Christmas tree is a new attraction at the Hetherington display at their home at 330 Butler Lane. 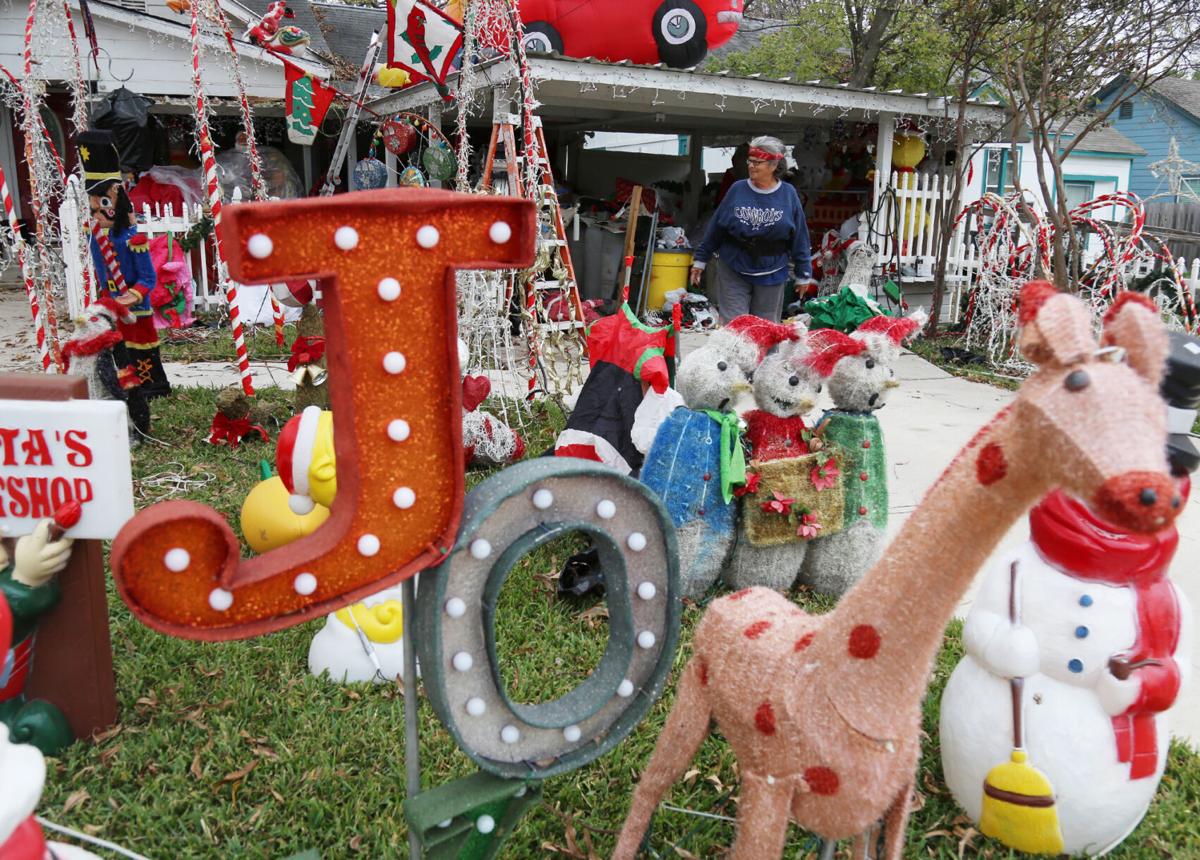 Alice Tristan continues months of work to get her display ready at 28th Street and Proctor Avenue. This year's display is dedicated to her grandson, Anthony Paul Tristan. 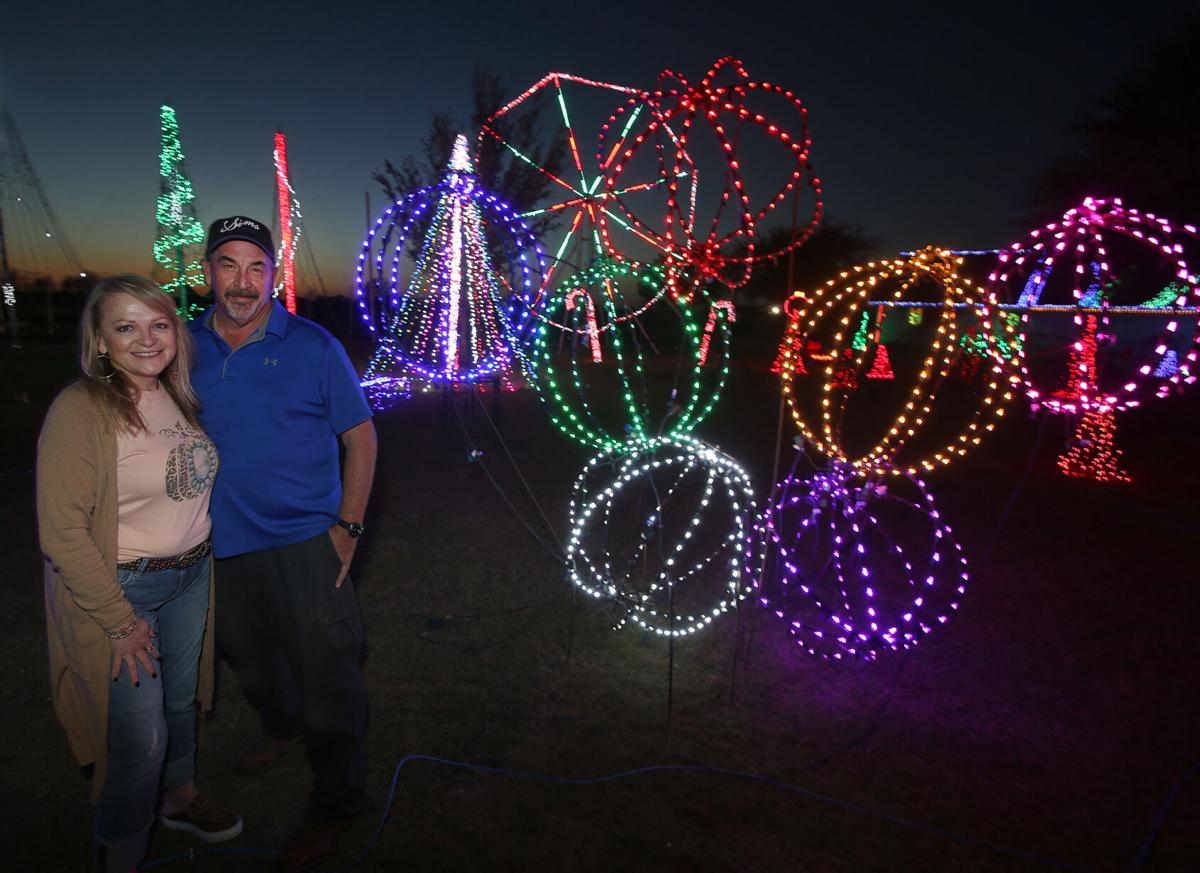 Kevin and Michelle Hetherington have created an extravaganza at their home at 330 Butler Lane near Crawford. This year the lights will run from 6 p.m. to midnight. 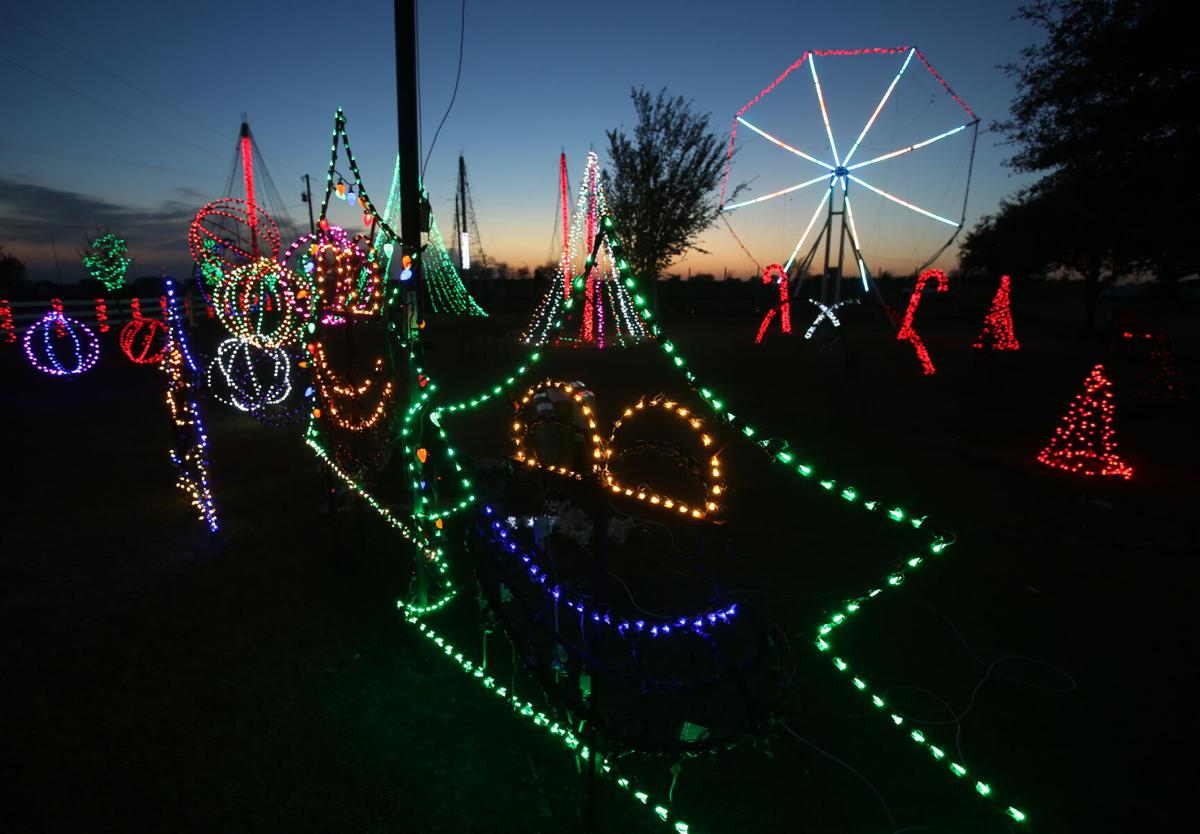 The Hetheringtons' display at their home at 330 Butler Lane near Crawford will run from 6 p.m. to 12 a.m. 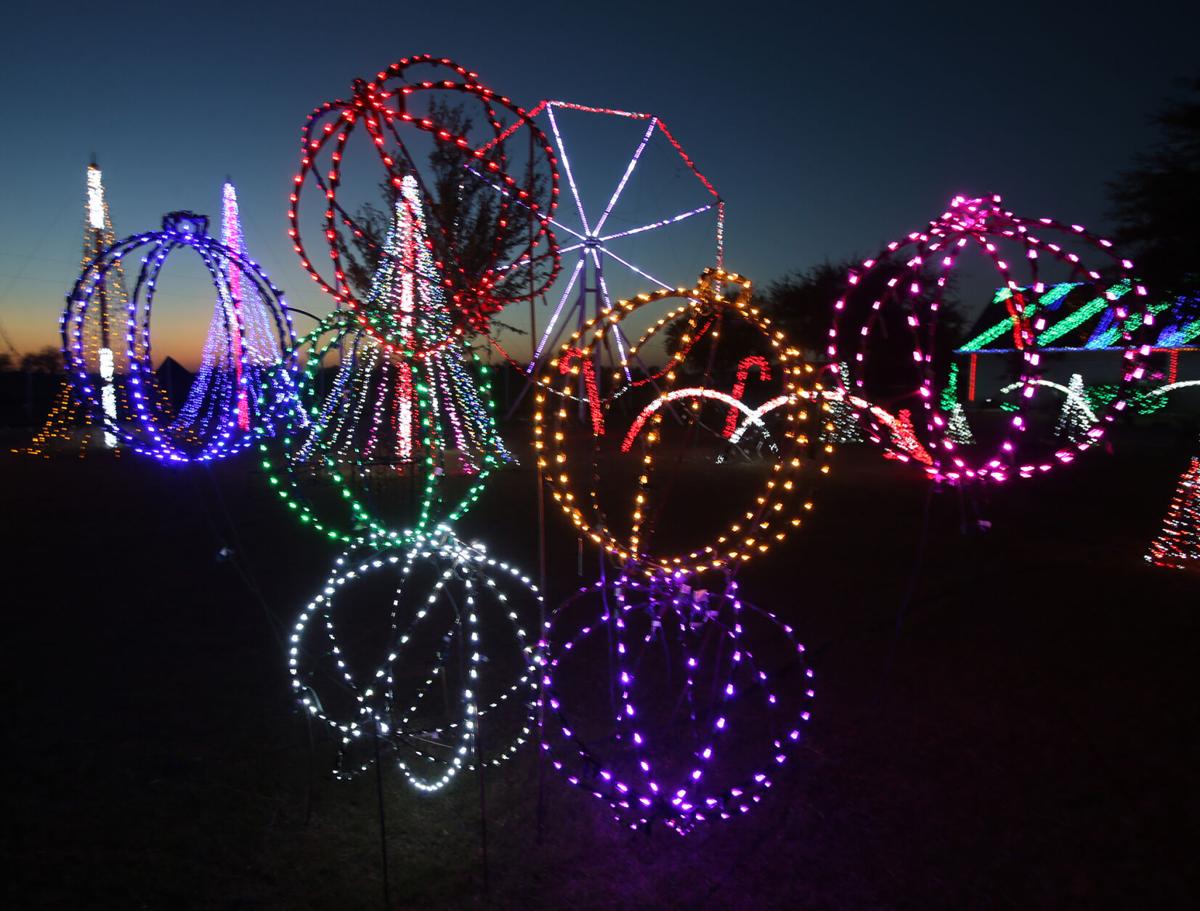 A feature at the Hetherington residence off Highway 6. 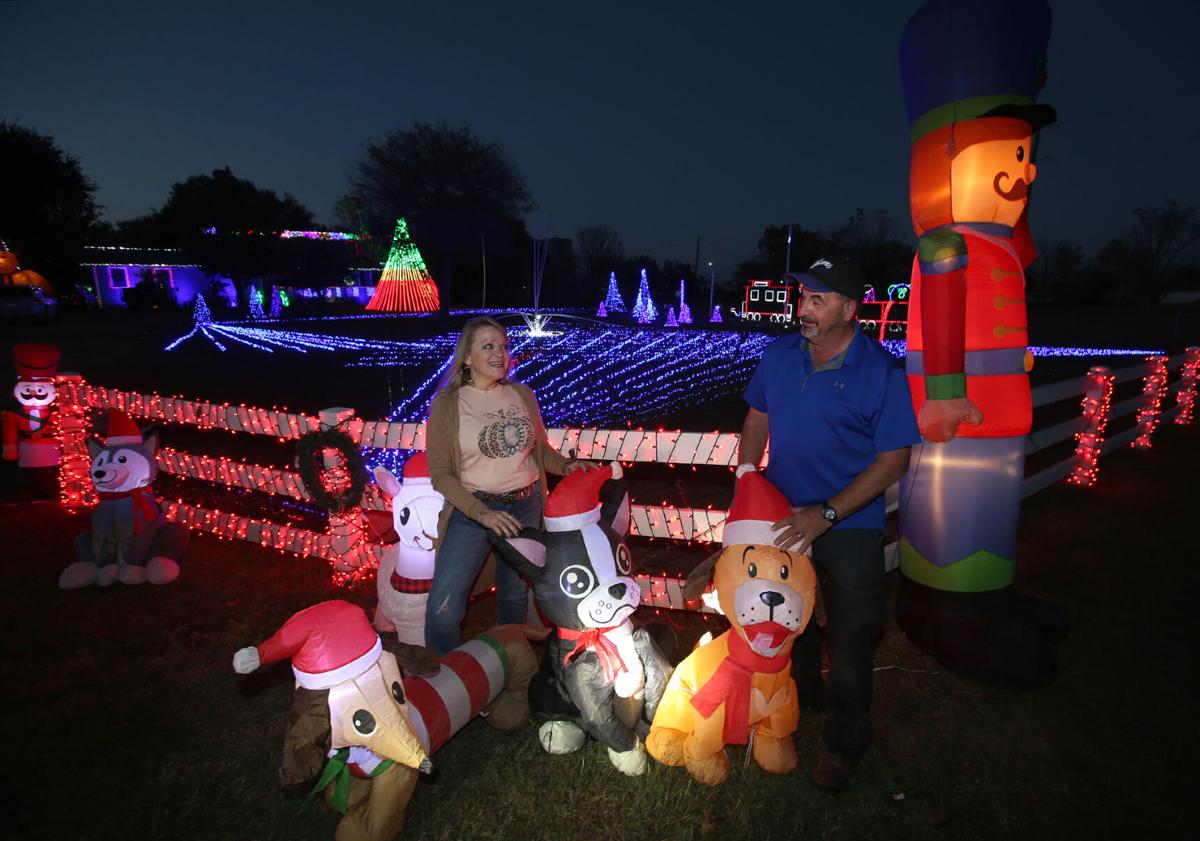 The Hetheringtons have been working on this year's display since February. 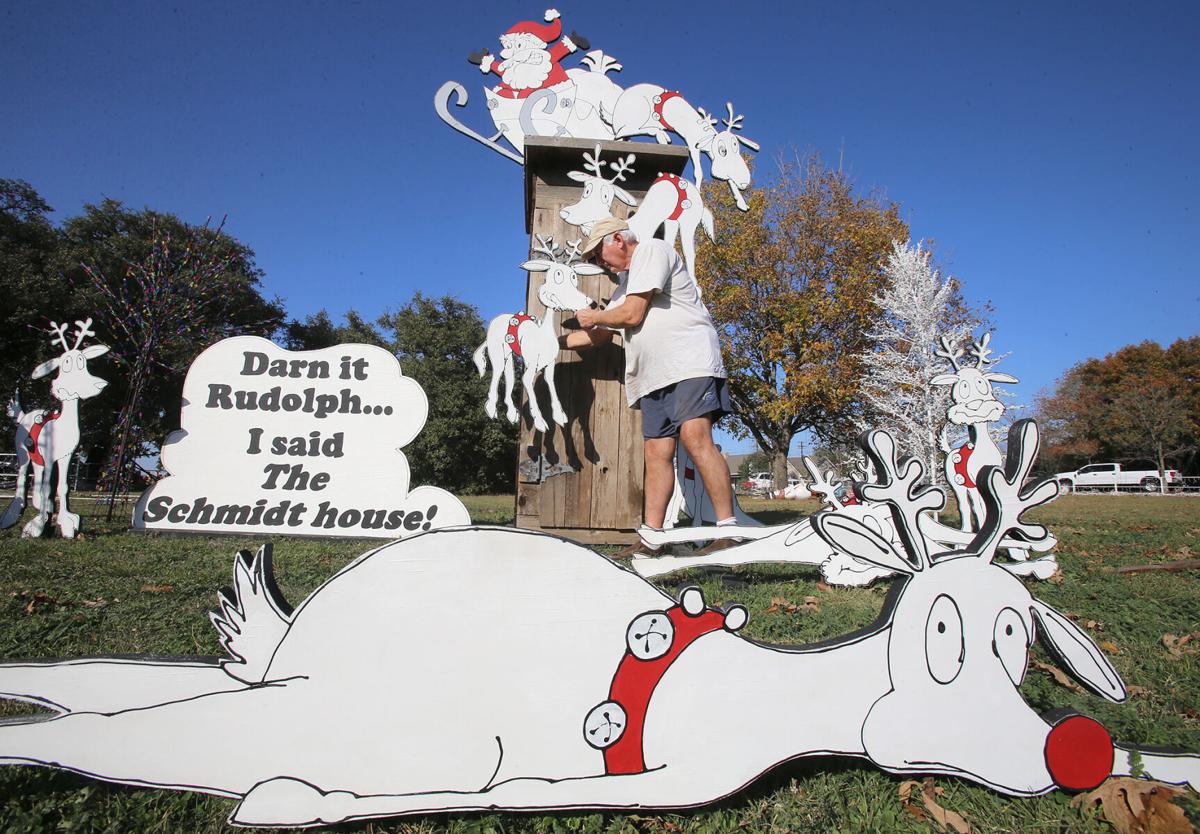 Roger Schmidt sets up Christmas decorations in his drive-thru holiday scene at his home on Oak Creek Circle off Highway 84. 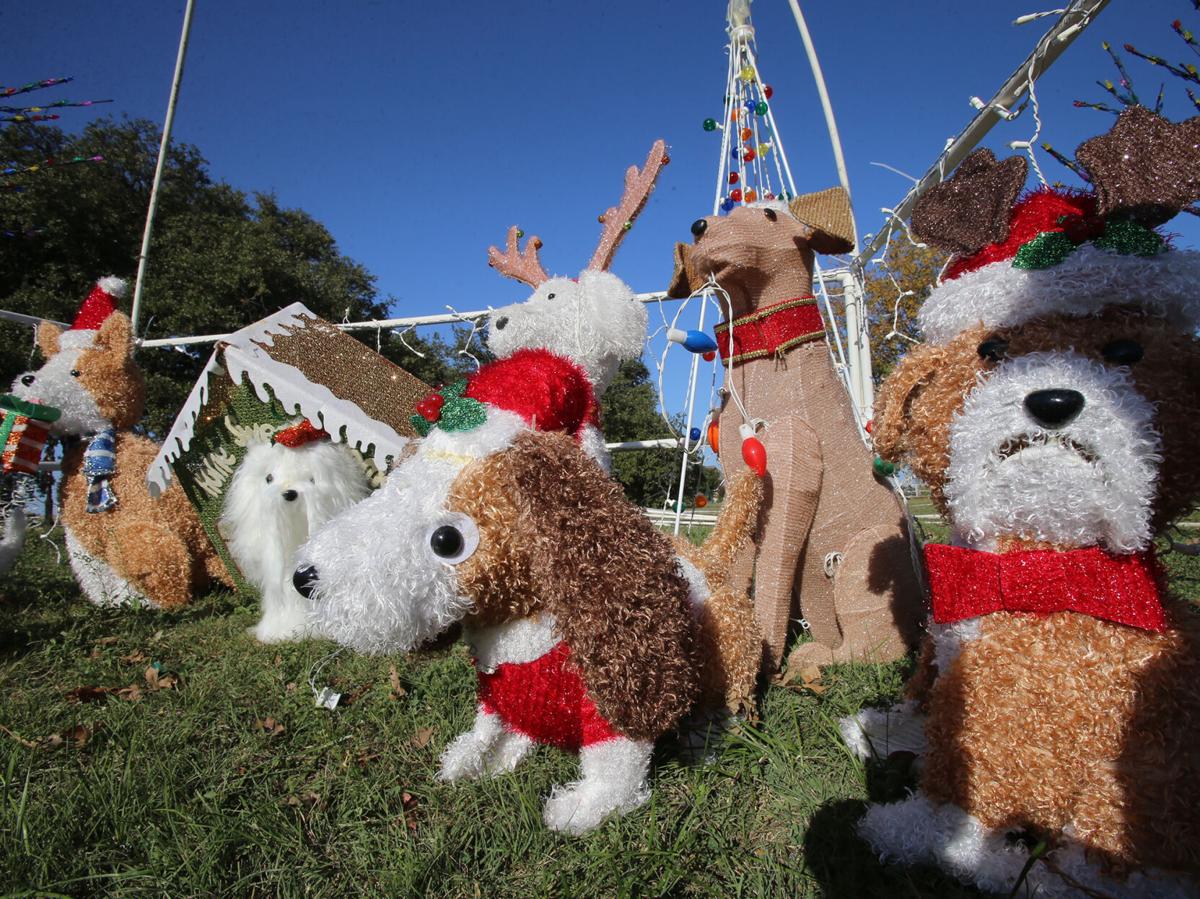 A scene from the Schmidt display on Oak Creek Circle. 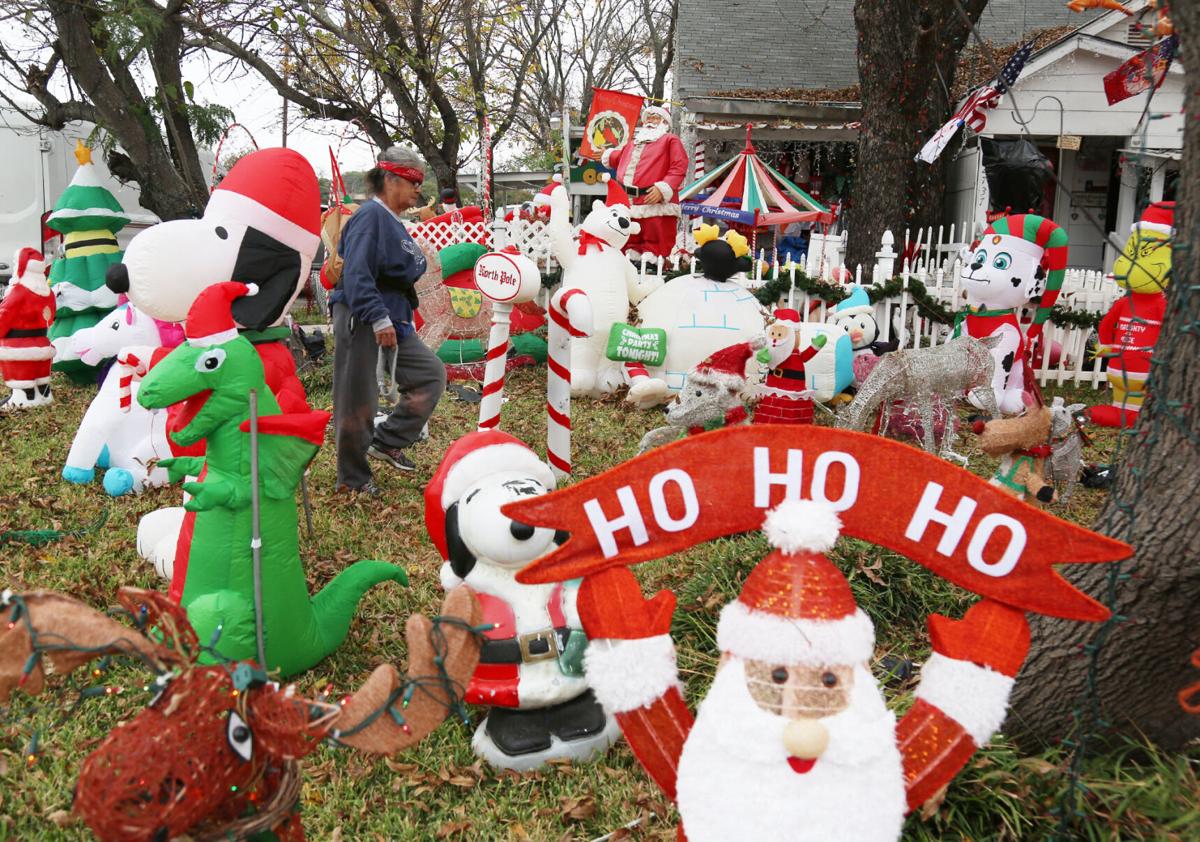 Alice Tristan continues months of work to get her display ready at 28th Street and Proctor Avenue.