Editor’s note: The Tribune-Herald in this holiday season is profiling modern-day artisans and how they contribute to a growing Waco craft scene.

Daniel Uptmor was studying industrial technology and riding bulls on the Tarleton State University rodeo team when he asked the guy who made his leather chaps if he could give him a job.

Uptmor, who likes working with his hands and who fell in love with the craft, learned enough at that part-time job at the Stephenville leatherworking shop to give him a Plan B, fallback vocation when he could not find a job in his degree field.

The 53-year-old West native moved back home and started his own business, Uptmor Saddlery, in 1992. The shop at 6020 N. State Highway 6 is a throwback to simpler times, a place that looks like it should be surrounded by Milly Scott’s general store, the North Fork Saloon or Nels Swinson’s blacksmith shop.

There are a couple of rows of used saddles and tack supplies on the right, with a small showroom of handmade leather products — belts, holsters, handbags, briefcases, wallets, rifle cases, checkbook covers — as customers walk in. Beyond that is a veritable Santa’s workshop filled with sewing machines, laser cutters, leather pieces and tool punches, that is if Santa dealt only in high-quality, handcrafted leather goods.

Belts, wallets and handbags are the top sellers, but Uptmor says if someone can imagine something made from leather, he and his staff of four employees will figure out a way to get ’er done, even if they have not made something like it before.

“If it can be made out of leather, we can figure out a way to do it,” Uptmor said.

Despite the name, Uptmor’s shop does not make saddles anymore. But he said they still repair saddles and boots, though they do not make either there.

Most of Uptmor’s sales are custom orders and they are especially busy around Christmas season, he said. The business likely will sell 100 handcrafted belts, many of which are personalized with the customer’s name or initials, with intricately tooled designs added to the leather.

While Uptmor and his employees love the work, he acknowledges the craft has all but gone the ways of the general store and blacksmith shop.

“I think it is kind of a lost art,” he said. “There are not many people doing it anymore. I don’t know if it is because it is more of a hands-on thing instead of technology-driven or what. That might be why, but we do it all by hand.”

One of the shop’s biggest fans and best customers is McLennan County Sheriff Parnell McNamara, who is entering his 50th year in law enforcement and himself somewhat of a throwback to bygone days.

“They made the belt I have on now, the holster, the gun belts that are hanging in the sheriff’s office. They made our badge holders, the holsters for many of our officers. The chief deputy wears them, the captains and lieutenants wear their belts and holsters,” McNamara said. “They are the best of the best, bar none, plain and simple. I don’t buy leather goods anywhere else.”

McNamara said he also has bought initialed knife sheaths for his grandson and son-in-law and rifle cases for himself and his wife that can be carried on horseback.

“They are just the best, very high quality,” McNamara said.

While Uptmor learned from his college mentor, most of his staff, including his younger brother, Lynn, learned from him while on the job. Like his brother, Lynn Uptmor, 51, was a bull rider from West who continued the sport with a rodeo scholarship to Hill College and later at Sam Houston State University.

“I knew he was getting overloaded with work and I told him he needed some help,” Lynn Uptmor said. “He said, ‘Why don’t you help me,’ and I said, ‘OK,’ and that was about 26 years ago. We all just love working with our hands.”

Much of the leather Uptmor Saddlery uses comes from the century-old Hermann Oak Leather Co. in St. Louis, Missouri. The leather comes in what Daniel Uptmor calls “sides,” basically the hide from half of a cow. A side costs $225 and the company goes through 75 to 100 sides a year, he said.

Earlier this week, Rodney Johannsen, a seven-year employee, was working on a custom pistol case. Behind him on the wall hangs hard plastic replicas of pistols that he uses to get a perfect fit for custom holsters the shop makes.

“When I get a new holster pattern, I’ll make the pattern in my program, and I can actually take the leather over to the laser and cut the pattern out so that every time I do that same holster for that same gun model, it will be exact and I can cut that out every time,” Johannsen said. “We have a large collection of gun molds for most of the major brands. If there is a gun with no mold, they can drop the gun off and it can be custom fitted here. It’s molded around the gun so it won’t fall out but still allows easy access.”

Take a look inside the Uptmore Saddlery shop, a throwback to simpler times.

While the items are not inexpensive, they are made by hand with a high quality of craftsmanship and pride.

Belts start at $50 for the most basic and can go up to $300, depending on the intricacy and amount of work required. Briefcases start at $500, checkbook cases with individualized logos and bifold wallets are about $150. Handbags are about $300.

“We do everything by hand and I think you get a little better quality product,” Daniel Uptmor said. “It may cost a little more but it will last a lot longer. It’s just a lot more product for your money, and people appreciate the uniqueness of it because you can get it custom made however you want to. It’s something different.”

The impact of Biden's infrastructure bill

A seventh grader at China Spring Middle School was seriously injured Monday evening when a pickup hit her as she was riding her bicycle after school.

A 12-year-old China Spring student who was struck by a pickup truck after school on Monday has died from her injuries, according to the Waco P…

Waco Family Medicine has launched a new, public-facing phase of its fundraising campaign to build a $51 million headquarters. 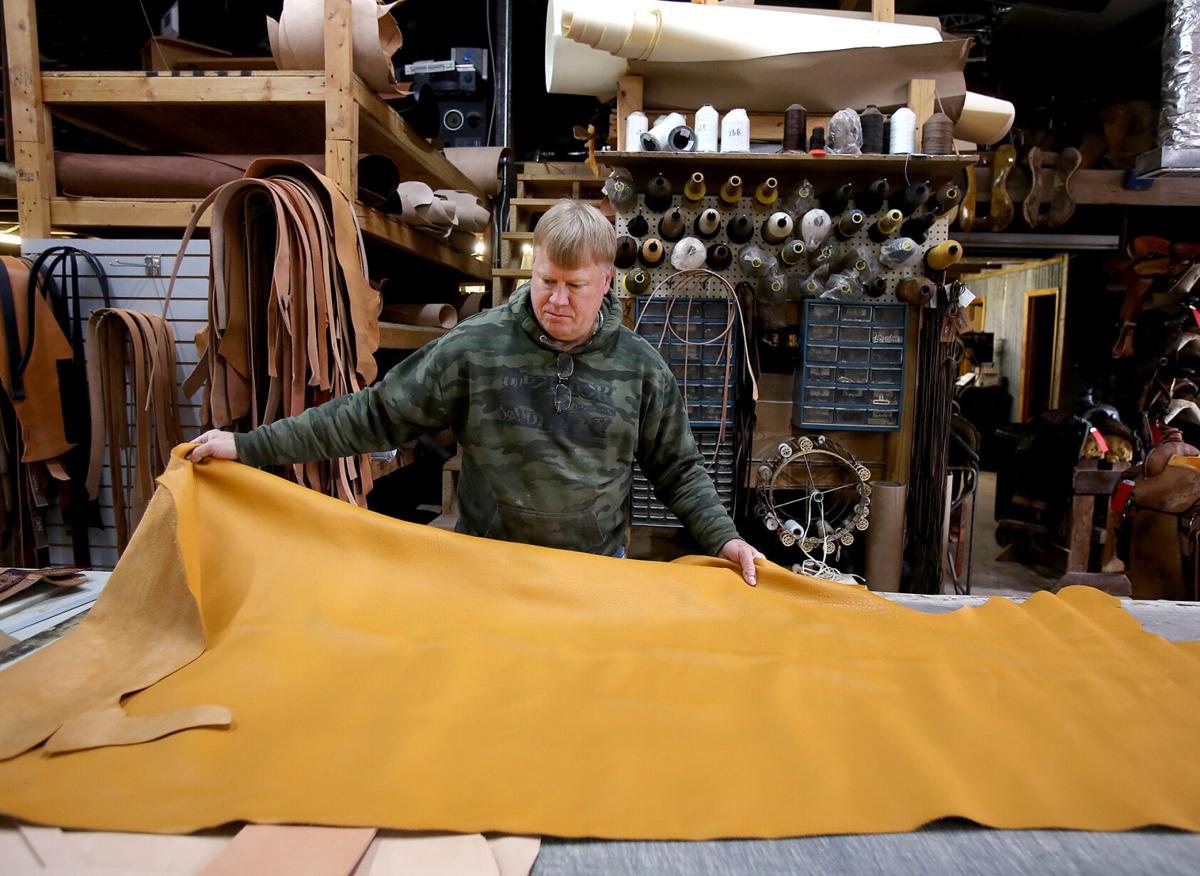 Uptmor Saddlery owner Daniel Uptmor lays out half a cow hide, which his company buys from a company in St. Louis, Missouri. 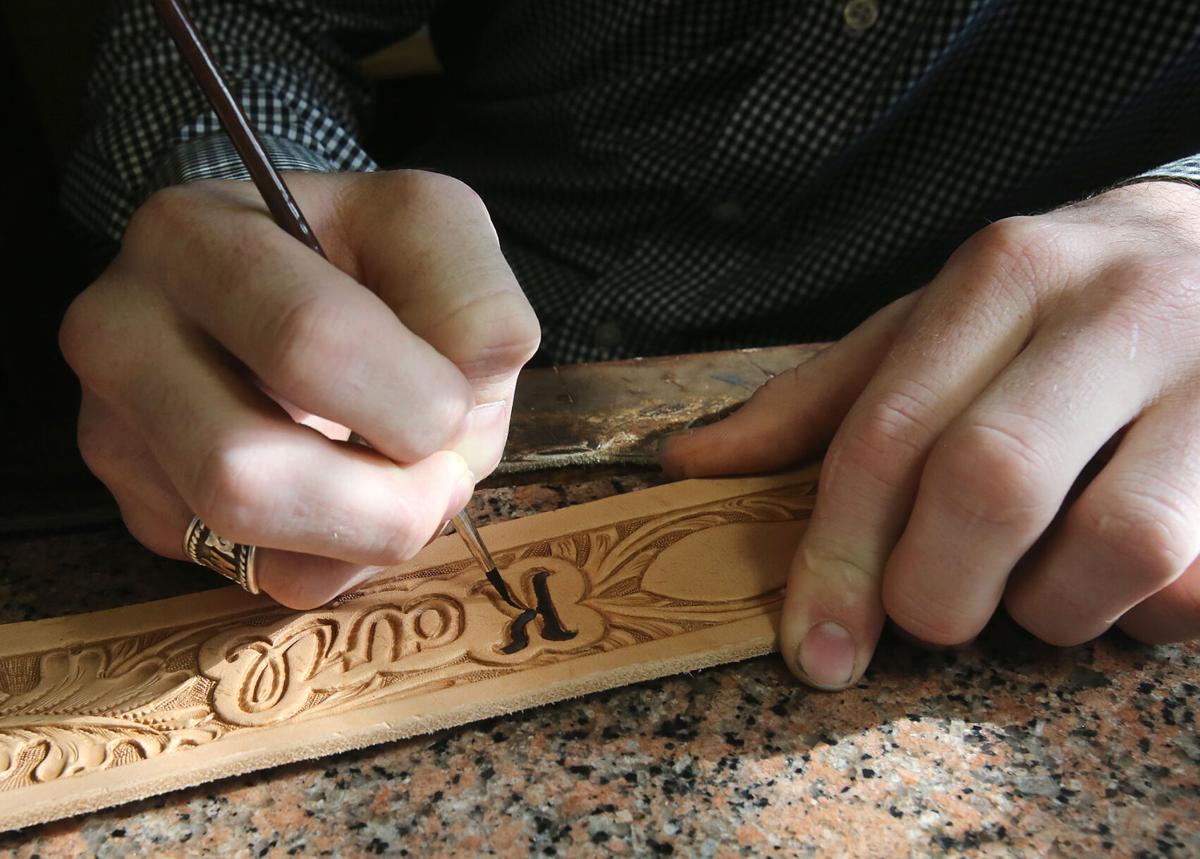 A worker inks lettering on a handmade leather belt at Uptmor Saddlery on Highway 6. Uptmore started the shop in 1992 after a stint working part-time and learning the craft from a Stephenville leatherworker who made him a pair of chaps while Uptmore was riding bulls for Tarleton State University. 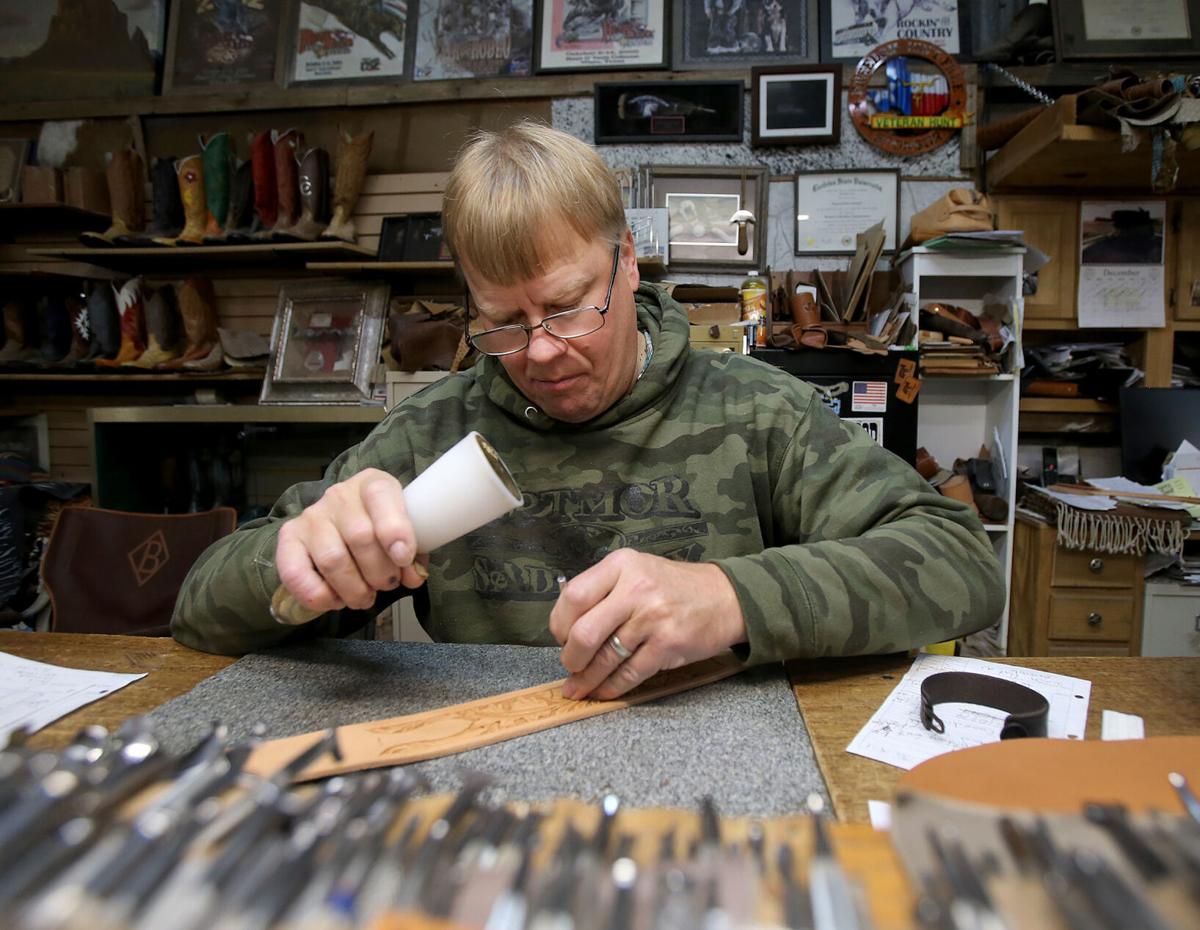 Uptmor Saddlery owner Daniel Uptmor tools a leather belt. He started the shop in 1992 after a stint working part-time for the Stephenville leatherworker who made him a pair of chaps while he was riding bulls for Tarleton State University. 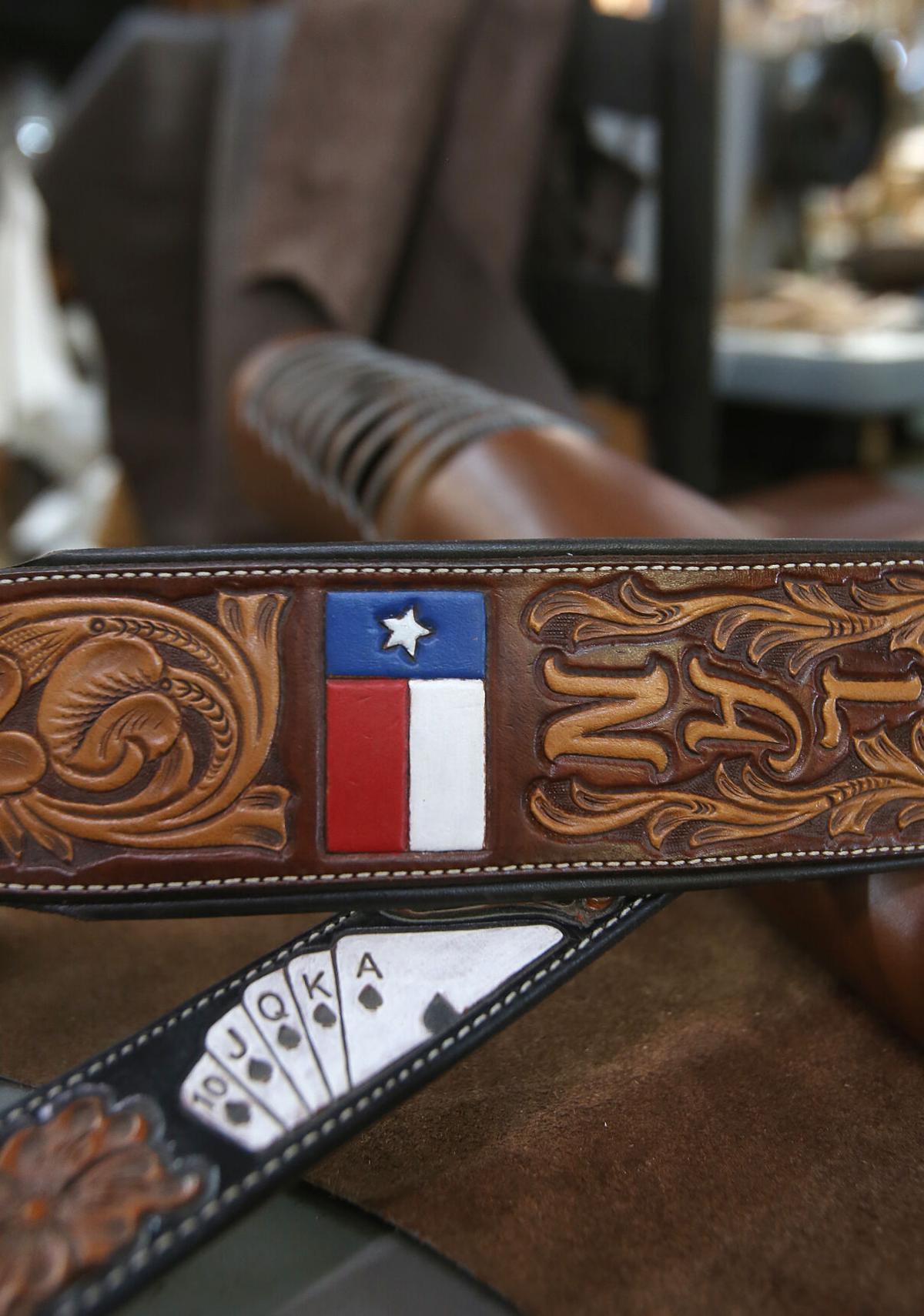 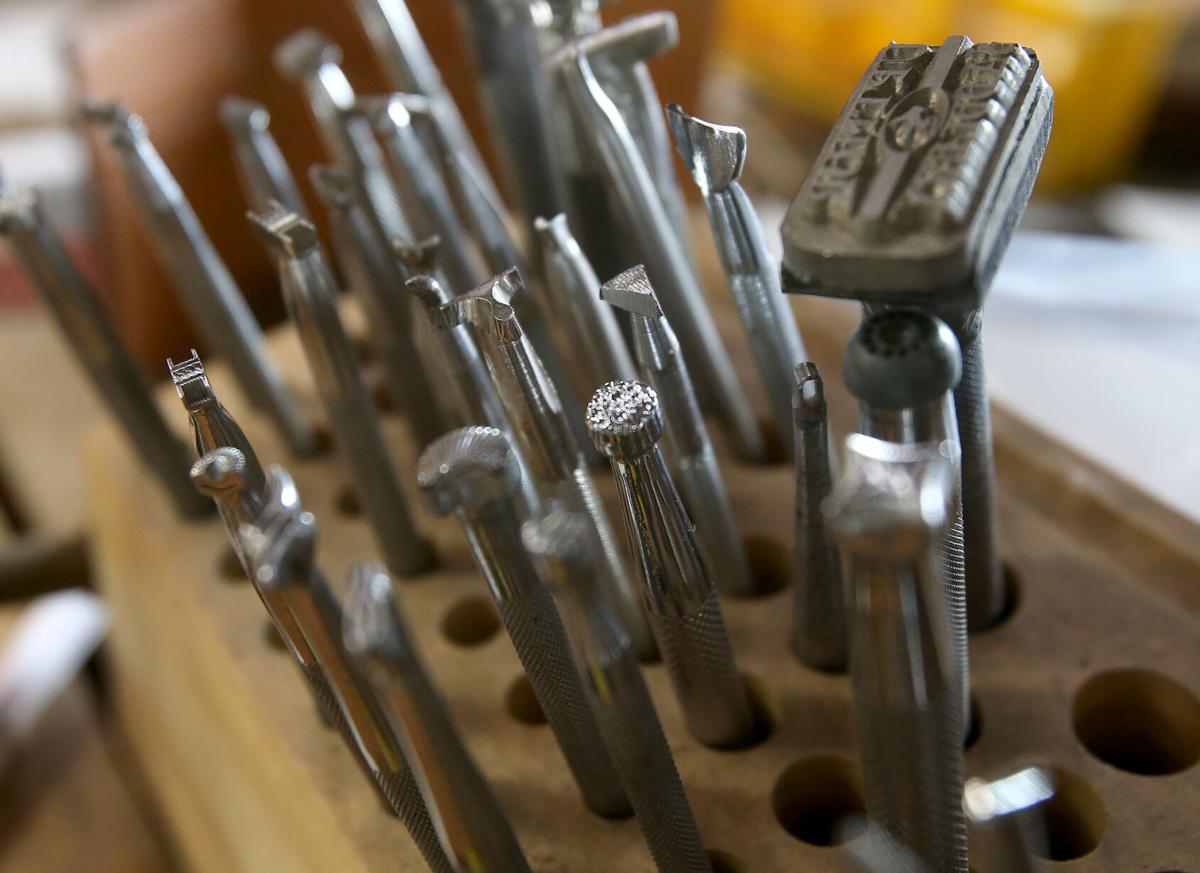 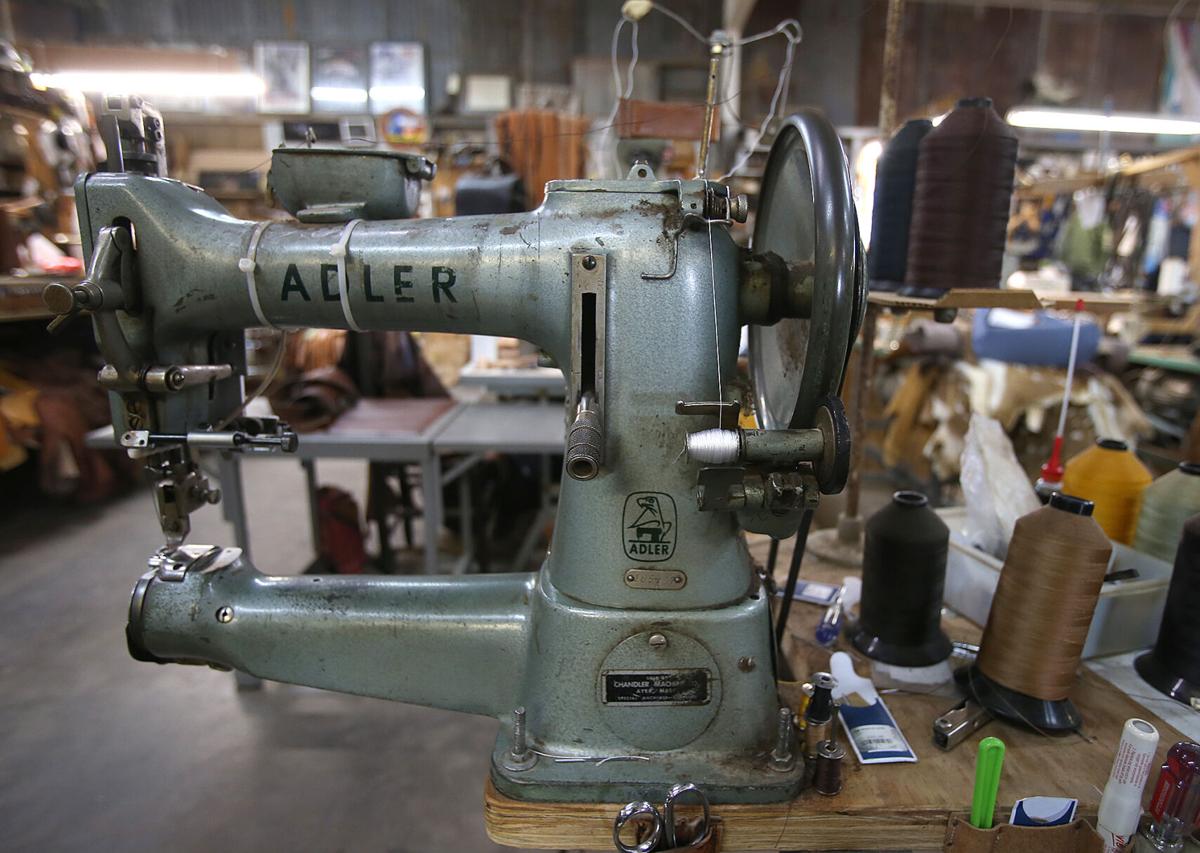 An old sewing machine is among the tools of the trade at Uptmor Saddlery. 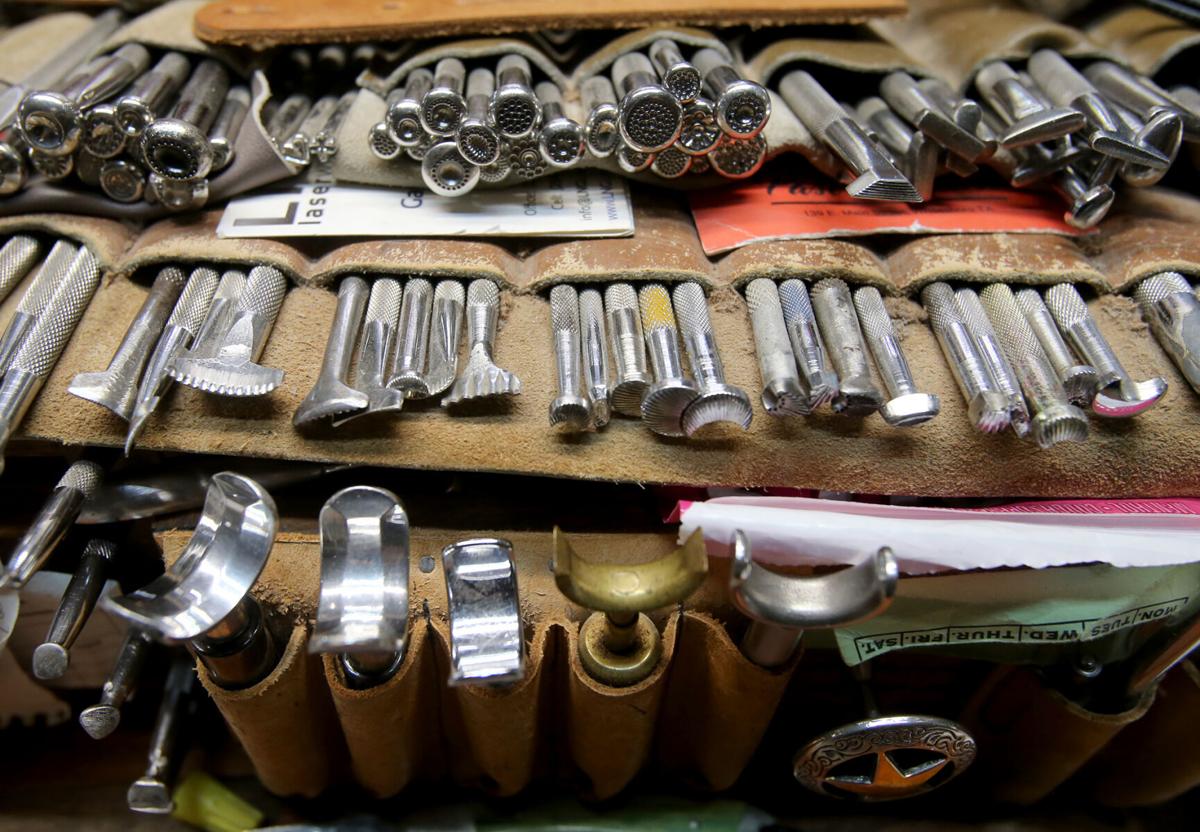 Tools of the trade lined up at Uptmor Saddlery. 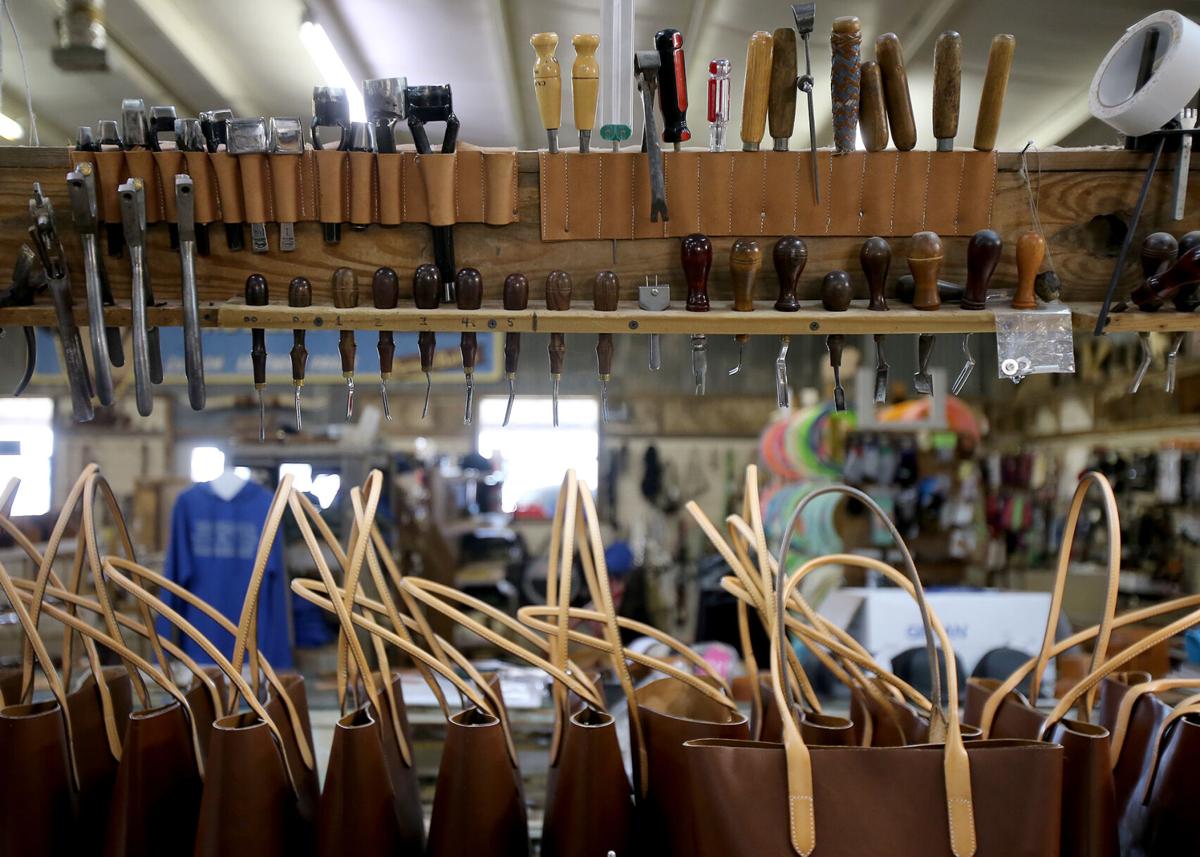 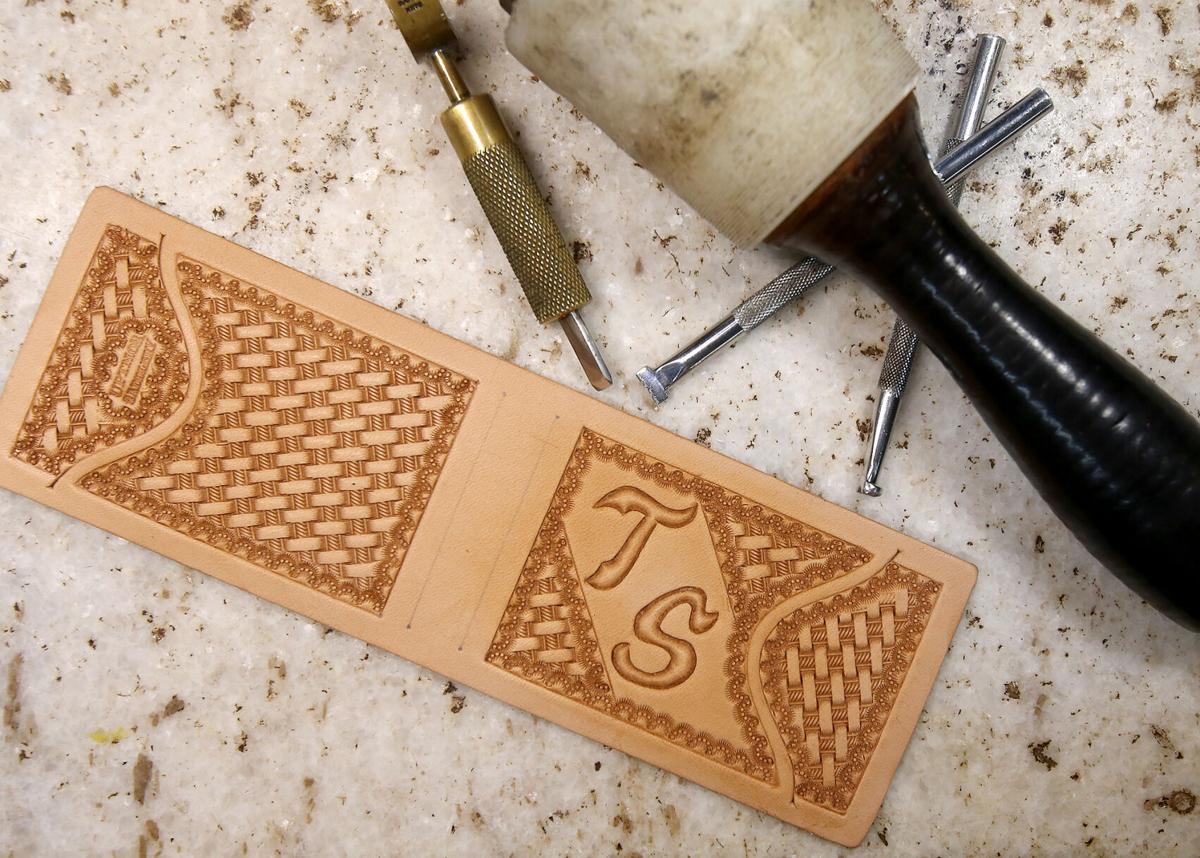 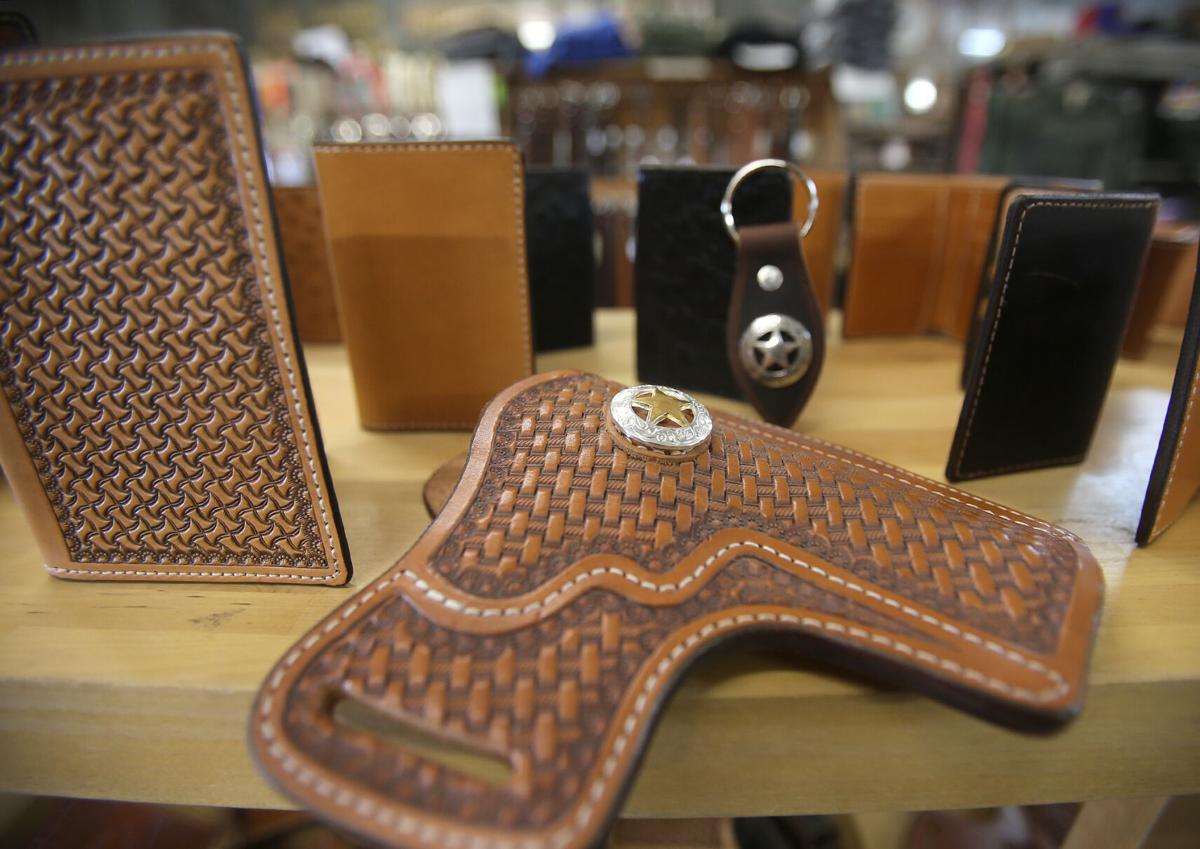 Billfolds, holsters, keychains and other handmade leather goods are on display at Uptmor Saddlery. 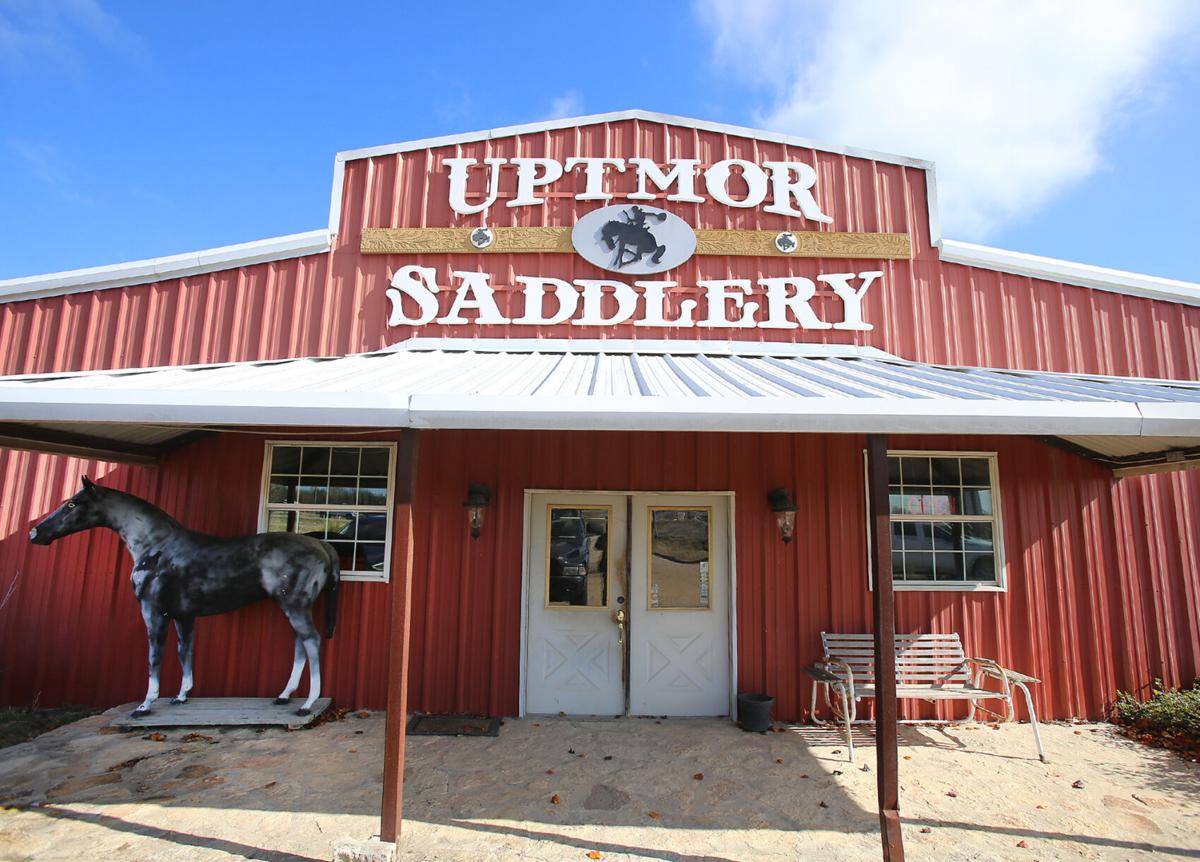