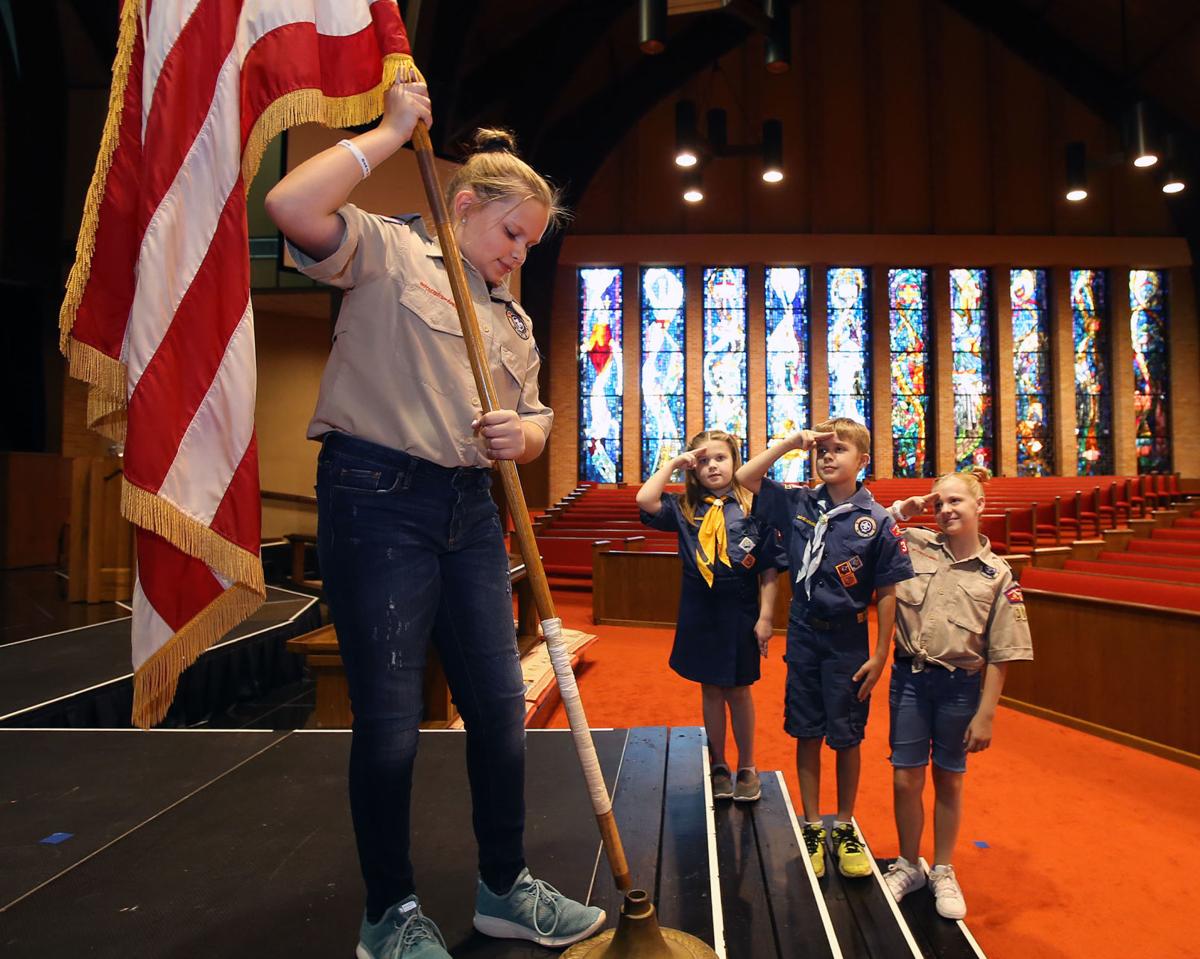 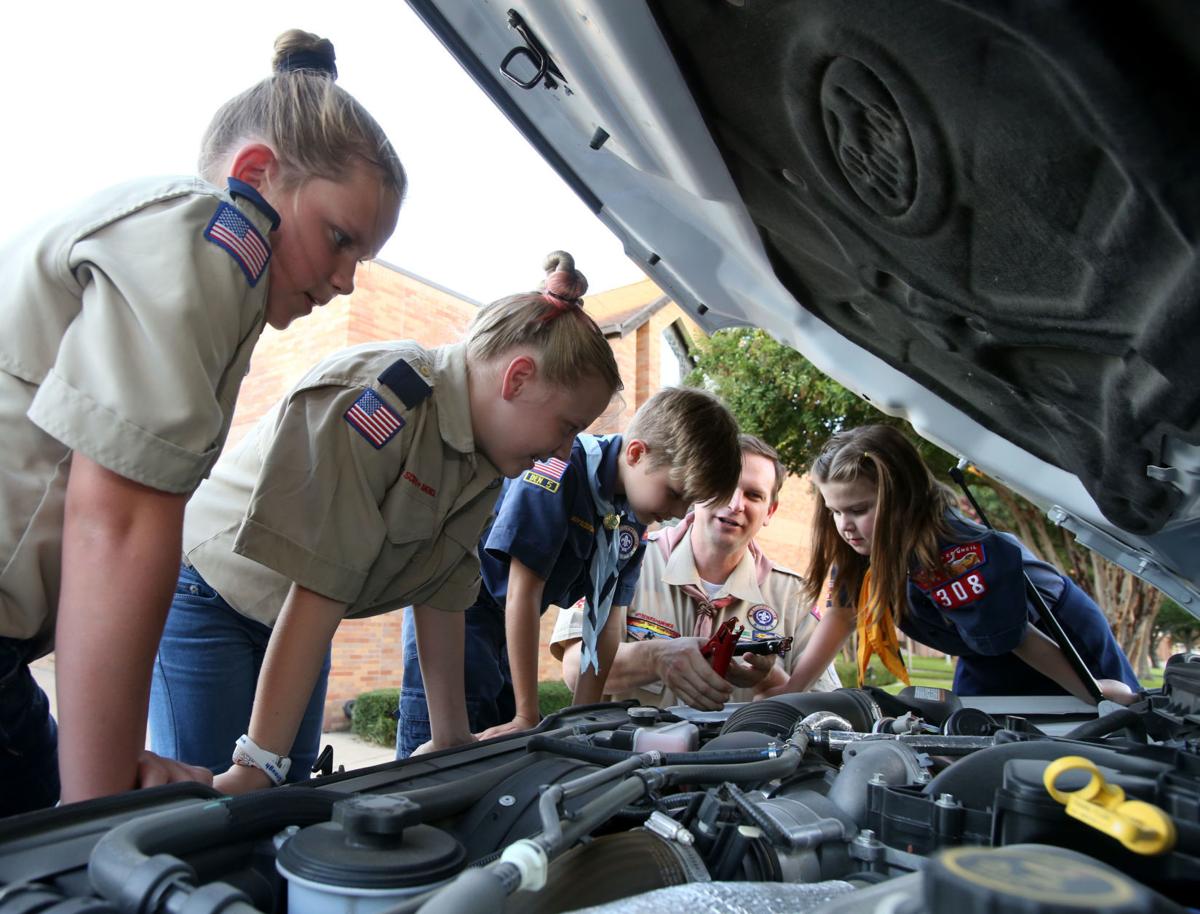 Meg Morrison (from left), Claire Williams, Tyler Carroll and Sadie Thomas learn a few basic automotive tips from Pack 308 Cub Master Evan Morrison (back). Cub Scout packs nationwide, in the Boy Scouts of America program for kids age 5-10, are now signing up girls to their ranks for the first time in the organization’s history. Single-gender Scout troops for older girls are also forming. 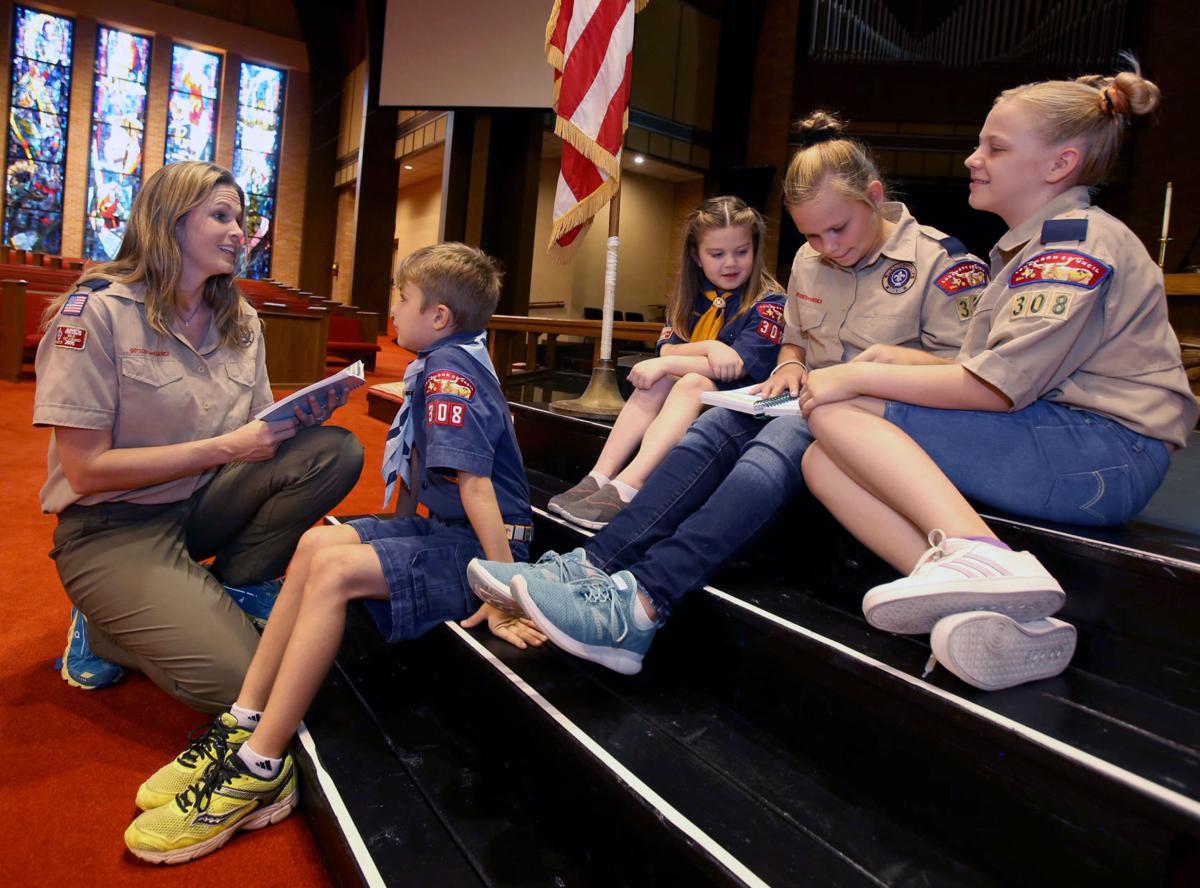 For her entire young life, Meg Morrison, 10, was the only member of her family without a Boy Scout uniform.

Her grandmother, grandfather, mother, father and brother all had uniforms, but because of her age and gender Meg was excluded from one of the oldest clubs in America.

“I was pretty disappointed because I liked camping, but I didn’t think it was fair that only boys could do it and not girls, because girls could do anything that boys can do,” Meg said Thursday.

This year, after a century of exclusion, young girls across the nation, including Meg, will join the ranks of Boy Scouts of America. Some already have, in an “Early Adopter” program.

“I think it’s a really neat opportunity because for generations and generations it’s just been Boy Scouts and now it’s Cub Scouts and Scouts, and we can learn valuable life lessons, outdoor stuff, how to tie knots, and you can get a lot of friends from scouts, too,” she said.

Now, Meg has her own Cub Scout uniform and is looking forward to the day when she sews on the patch for her next rank, possibly a step on the way to earning the top rank of Eagle Scout.

Though the national organization will officially change the Boy Scouts program name early next year, to Scouts BSA, and has lifted the 108-year-old ban on female membership, the inclusion of young women remains optional for Cub Scout packs, and some Central Texas packs are sticking with tradition. All regional councils will have offerings for girls, according to the national organization.

Troops, for children starting at age 11, will be split by gender.

It is Scout recruitment season in Waco. Five local packs have decided to allow girls ages 5 to 10 to join the Cub Scouts, including Cub Scout Pack 308, chartered by the First United Methodist Church of Waco.

Pack 308 is gearing up for its first coed registration Tuesday.

“Little sister has always been around and so it is not surprising that the doors were opened so that they could join Cub Scouts,” Morrison said.

Initially, there were grumblings among Scout leadership about the girls’ integration, but concerns died down as word spread that the girls and boys would be separate at the Scout level, he said.

Morrison said girls are generally more mature, so he thinks keeping the genders separate is for the best.

“I’m a big fan of separating the boys and the girls at the older level into different troops. The troop is intended to be boy led. The boys would never have an opportunity for leadership because the girls were involved. They (girls) just simply mature quicker,” he said.

As Cub Master, he is excited to see his daughter carry on the Morrison family scouting tradition, he said.

The organization creates better citizens by teaching youth to be good leaders, teachers, members of the community, and to appreciate the environment, he said.

By opening the doors to young women, the organization is better adhering to Scout Law, he said.

“It is always taught in Scouting to be inclusive and kind. I think all the membership changes, all of them, lead toward that,” he said.

With the exception of adding gender-neutral pronouns, the Boy Scouts curriculum is likely to remain the same, he said. Pack and troop leaders are allowing families to talk to the boys about the girls’ inclusion. Mainly all the returning Scouts in his group will notice is a 30-minute time change, he said.

On the other side of the aisle, the Girl Scouts of Central Texas, an organization of 17,500 girls, has no plans of opening the doors to boys anytime soon, spokeswoman Hannah Bruno said.

The century-old organization prides itself on being “girl led” and focused on the needs and interests of young women, Bruno said.

“We plan to continue in that vein, staying true to what the organization was founded to do, which was to empower girls and show them that they are capable of doing anything,” she said.

Meg Morrison (from left), Claire Williams, Tyler Carroll and Sadie Thomas learn a few basic automotive tips from Pack 308 Cub Master Evan Morrison (back). Cub Scout packs nationwide, in the Boy Scouts of America program for kids age 5-10, are now signing up girls to their ranks for the first time in the organization’s history. Single-gender Scout troops for older girls are also forming.