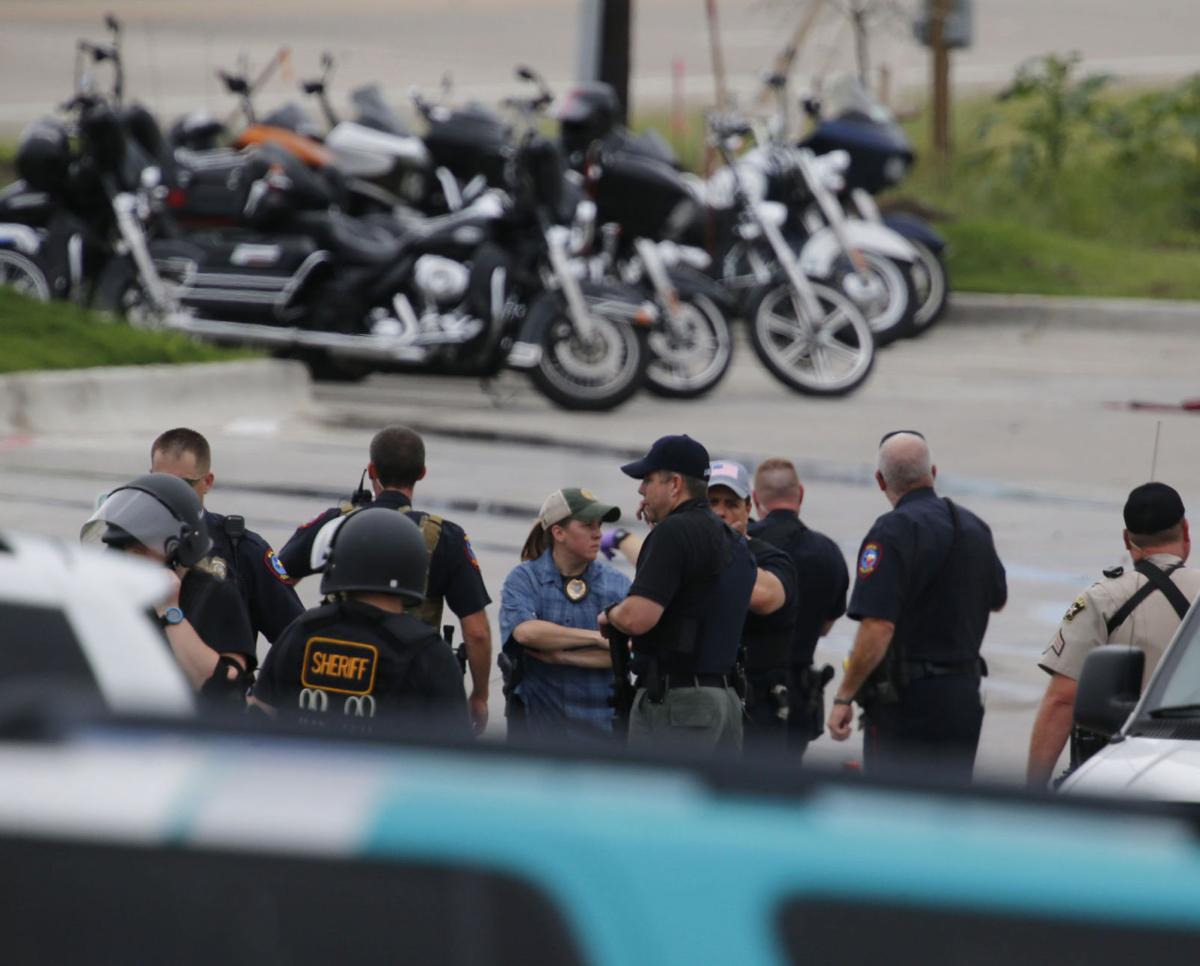 Law enforcement and emergency medical personnel work the scene of a shooting at Twin Peaks on Sunday afternoon. 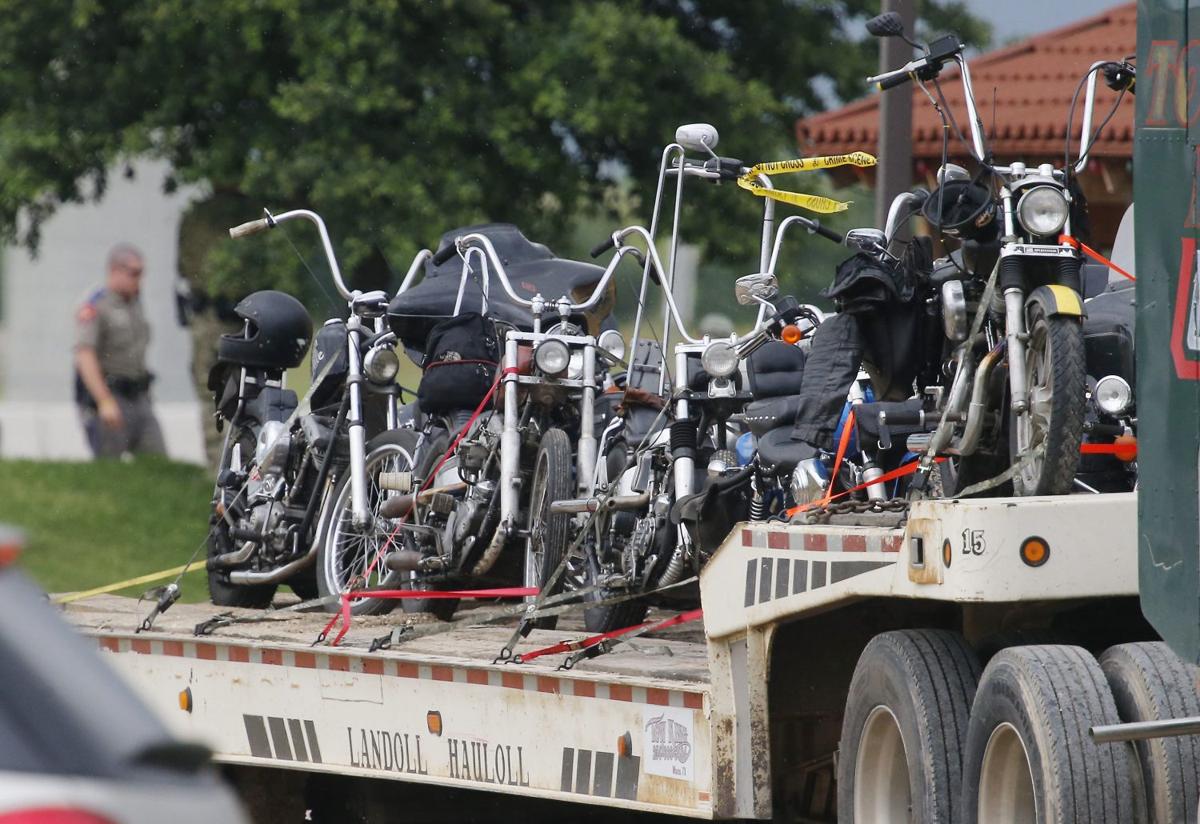 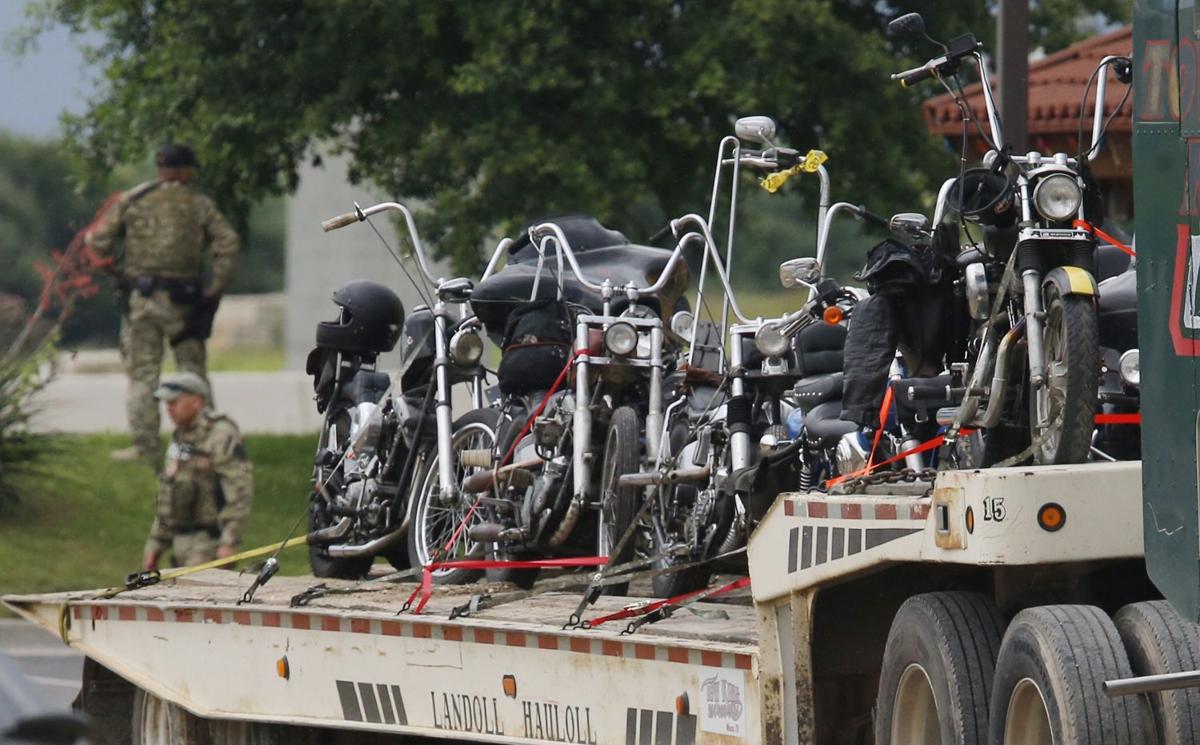 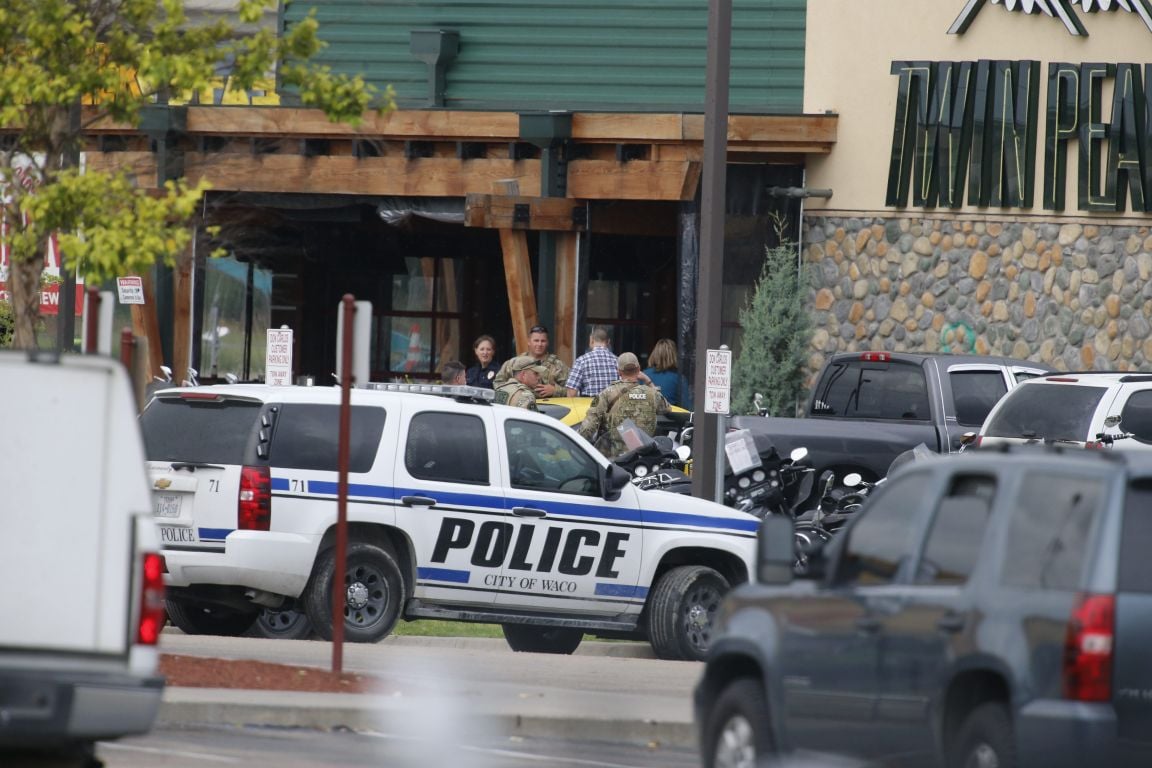 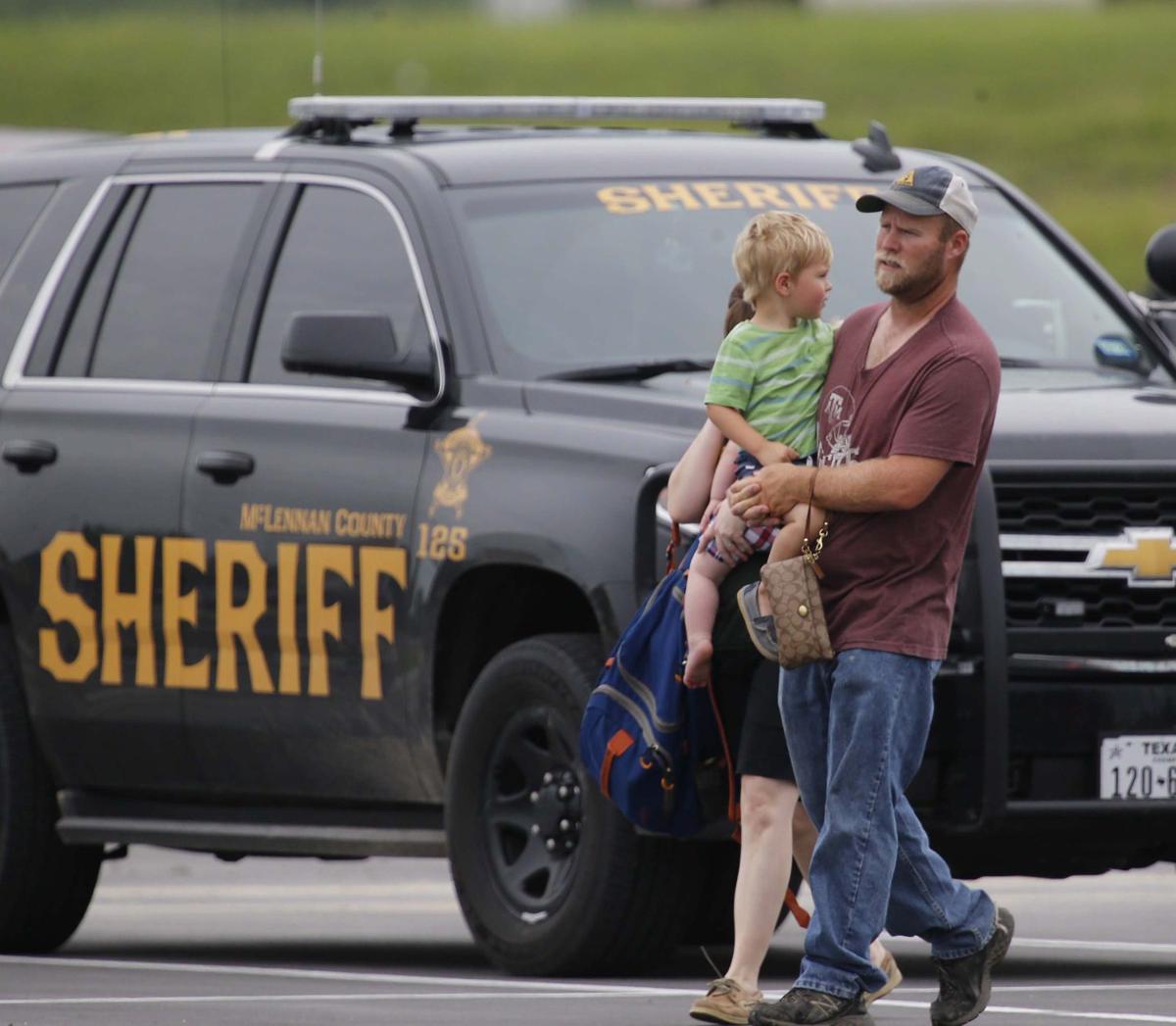 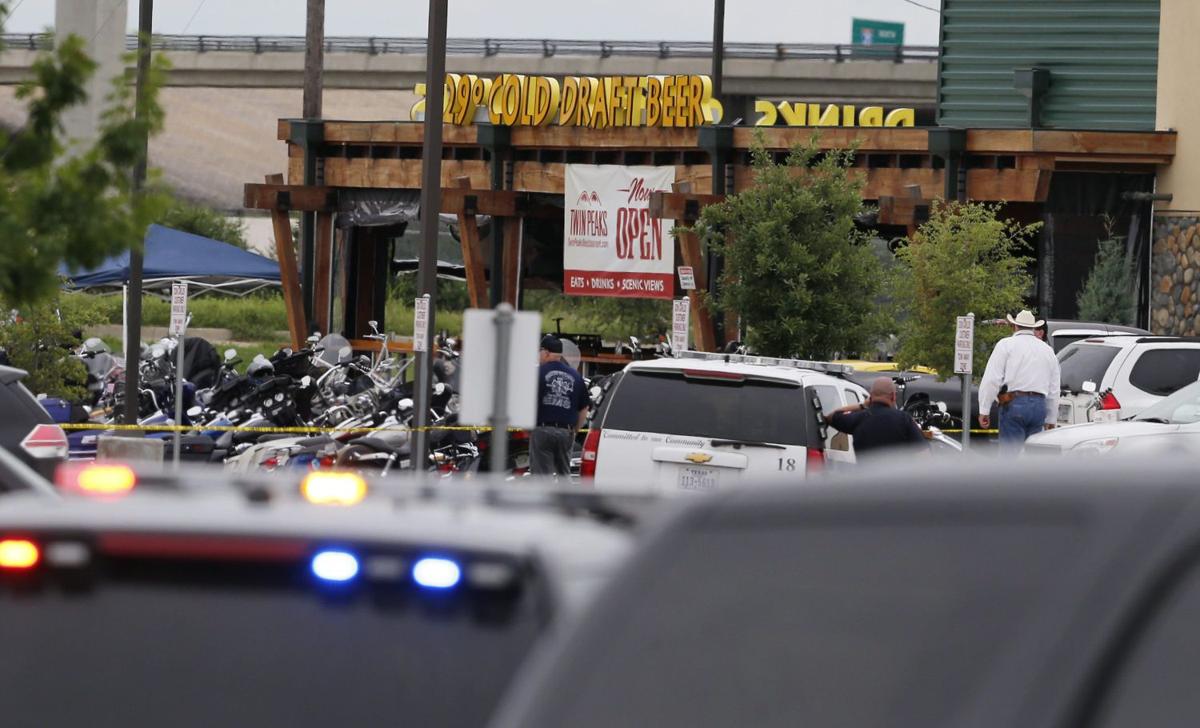 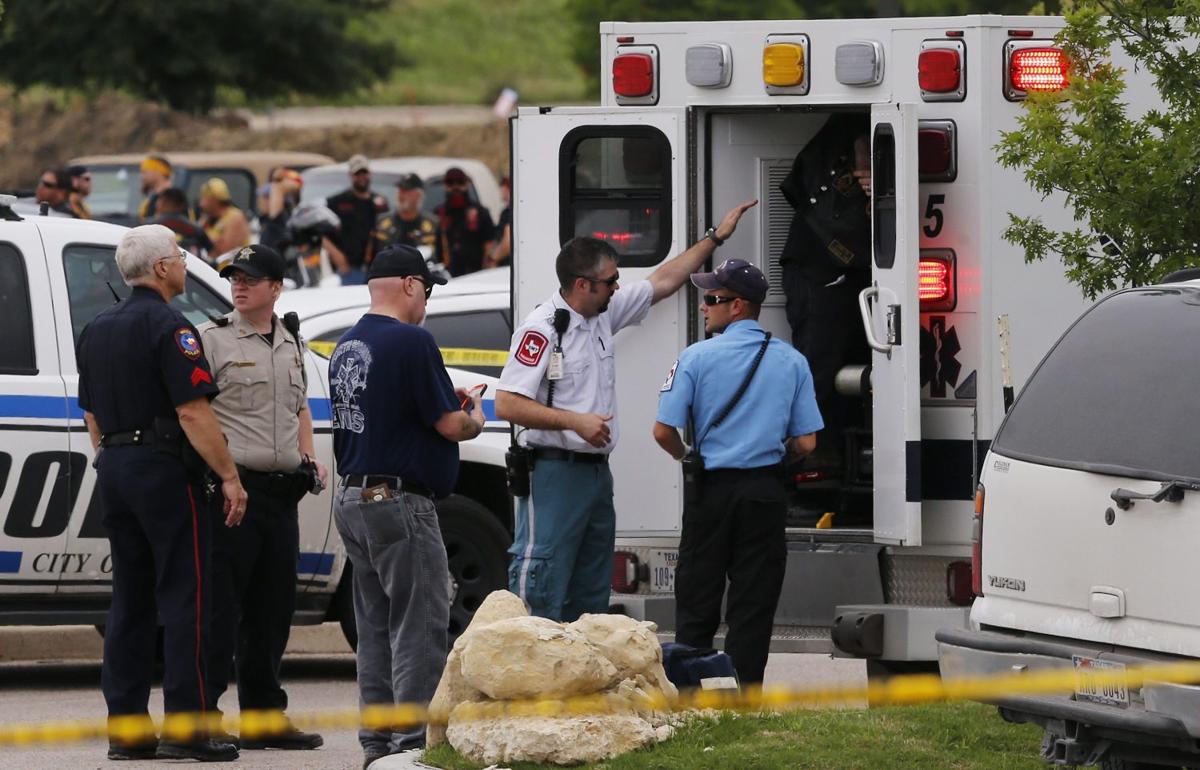 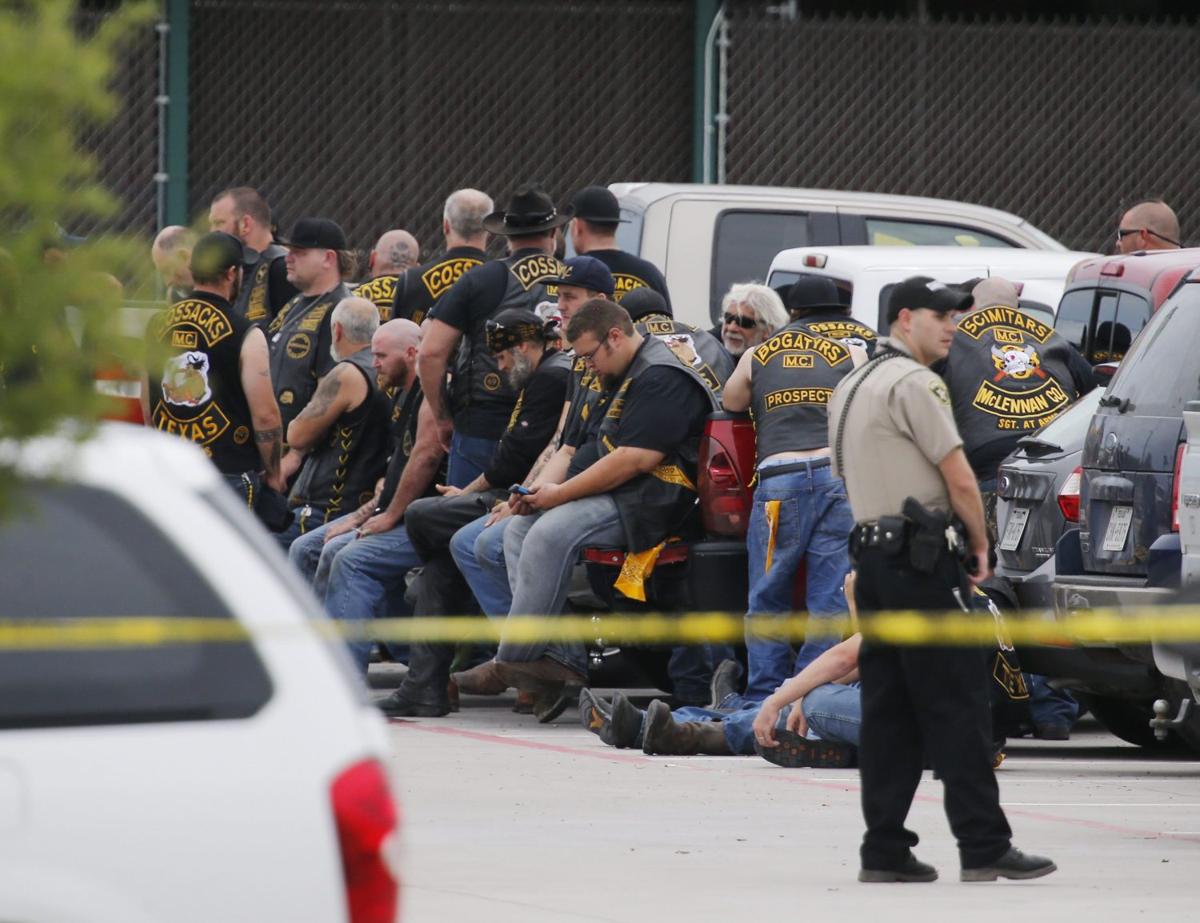 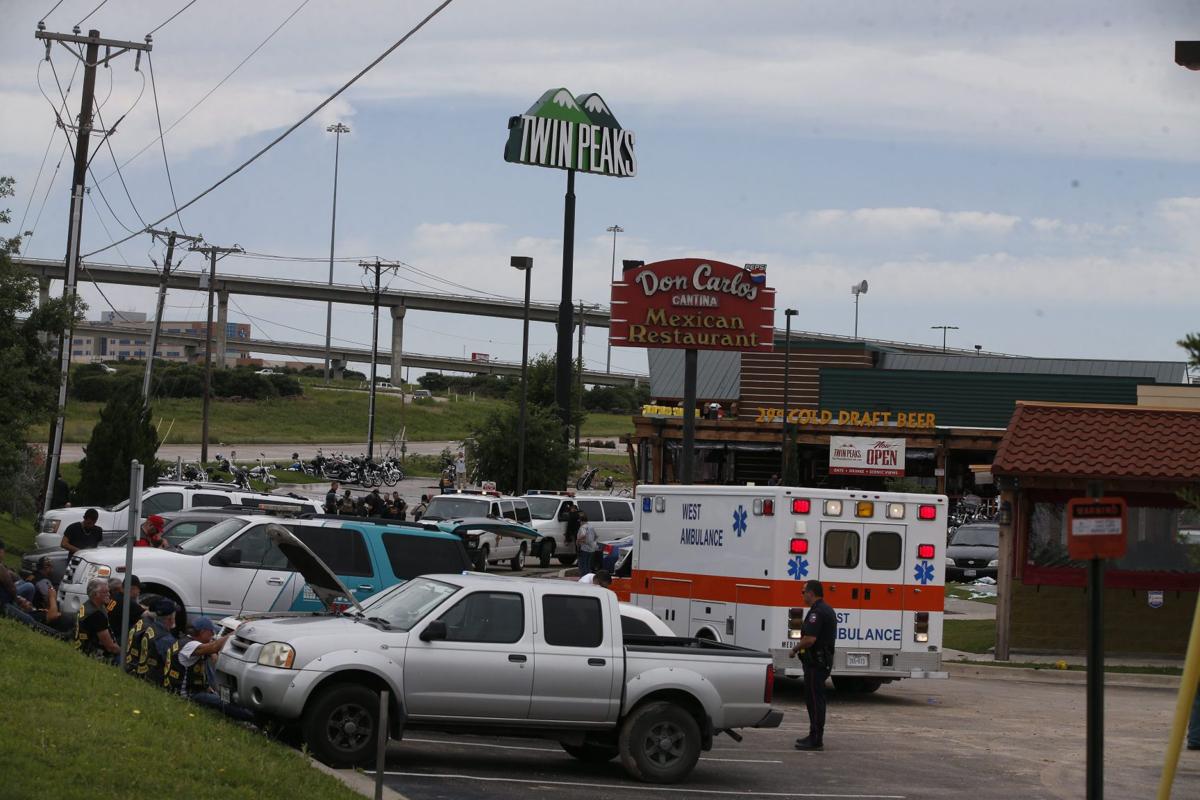 The more than 170 members of biker gangs that Waco law enforcement officials say were involved in a deadly biker gang shootout Sunday at Twin Peaks won’t be going anywhere soon.

Justice of the Peace W.H. “Pete” Peterson set bonds for 174 gang members charged with engaging in organized criminal activity at $1 million each.

Meanwhile, a lawyer for Jimmy Don Smith, 59, of Caldwell, moved quickly Monday in getting a bond-reduction hearing set. Dan Jones, a Bryan lawyer, was in Judge Ralph Strother’s 19th State District Court on Monday to request the hearing for Smith, a mechanic with Novosad Enterprises of Caldwell. Strother set the hearing for June 5.

Peterson declined to release the identities of the nine men killed Sunday because he said only one man’s family has been notified that he knows of so far.

He said all but two of those killed were not from the Waco area, but declined to say where they were from.

Even if the men bond out of jail, they likely won’t be riding their motorcycles home. The motorcycles were confiscated as part of the massive law enforcement investigation, and sources say they likely will be seized and forfeited by McLennan County through civil forfeiture procedures and sold at auction.

In affidavits to support the arrests of the bikers issued by Peterson on Monday morning, Waco police Officer Manuel Chavez officially identifies the groups as “members and associates of the Cossacks Motorcycle Club and the Bandidos Motorcycle Club.”

While Waco police Sgt. W. Patrick Swanton declined to identify the opposing groups Sunday, he said at least five motorcycle gangs were involved in the altercation.

After the shootout, firearms, knives or “other unknown edged weapons,” batons, clubs, brass knuckles and other weapons were recovered from members and associates of both gangs, the complaint alleges.

Other weapons also were found on their motorcycles.

As law enforcement struggled to process the nearly 175 new inmates in the wake of a Sunday brawl and shootout at Twin Peaks that killed nine and injured 18, more information was released about the nature of the shooting among five rival biker gangs.

Some Waco motorcyclists who showed up about noon Sunday at Twin Peaks restaurant thought they would be having lunch and discussing pending “bikers rights” legislation.

The Twin Peaks restaurant in Waco will be permanently closed as a result of Sunday’s deadly shooting.

A noon-hour shootout Sunday involving rival motorcycle gangs and Waco law enforcement officers left nine people dead and at least 18 wounded at the Twin Peaks restaurant in Central Texas Marketplace, with a veteran Waco police spokesman calling the crime scene the bloodiest he has ever seen.

Darhonda McFarland was already on edge Sunday afternoon because of the massive shootout near Twin Peaks when 30 black-clad bikers walked into her restaurant about 1:30 p.m.

Former undercover agent Jay Dobyns says people can be forgiven for thinking Sunday's biker bloodbath in Waco, Texas, was a throwback to a bad 1970s movie.

Statement by operating partner of Twin Peaks franchise in Waco

The following statement was posted to the Facebook page for the Twin Peaks restaurant in Waco earlier this evening.

Waco police Sgt. W. Patrick Swanton said police attempted to contact Twin Peaks’ corporate headquarters after the shooting, but said he is unsure of the content of that conversation.

Only 1 of 9 slain in Twin Peaks shootout from Waco; Witnesses say Cossacks instigated

Preliminary autopsy results returned Tuesday, revealing the names and causes of death for each of the nine men killed in Sunday’s shootout at Twin Peaks that injured another 18 and resulted in the arrests of more than 170 people.

Wife of biker inmate: Some arrested in Waco are innocent

Some see difference between perceptions of Waco, Ferguson, Baltimore

Jailed biker suspects in Twin Peaks shooting from across state

Nearly 72 hours after a shootout erupted at Twin Peaks, killing nine people and injuring another 18, officials have found 318 weapons tucked into kitchen areas, vehicles and toilets — a lower estimate than was released early Wednesday morning.

At least one of the approximately 170 suspects jailed in a deadly shooting Sunday at Twin Peaks has been released on a $1 million bond and has been fitted with an ankle monitor, per the conditions of his release, officials confirmed Wednesday.

Bandido key chains, Cossack jewelry, knife sheaths, stickers containing obscenities and even raffle tickets were among the many items in clothing found on suspects after a judge signed the first 30 search warrants on suspects in the bloody Twin Peaks shootout that killed nine people and injured 18.

The shootout at Twin Peaks restaurant has cast a pall on biker-related events this spring and summer, causing some to be scaled back or canceled.

AP: Majority of 170 bikers arrested have no convictions in Texas

Records searched by The Associated Press show more than 115 of the 170 people arrested in the aftermath of a motorcycle gang shootout outside a Central Texas restaurant have not been convicted of a crime in Texas.

Days after a biker shootout at a Texas restaurant, the same group that organized the motorcyclists' meeting that turned violent received a pro…

Funeral held in Plano for biker killed at Twin Peaks

The family of one of nine people killed in a shootout outside a Waco restaurant has held a funeral for the man.

Eyewitness account of Twin Peaks shooting: 'a setup from start to finish'

A Cossacks member, president of a North Texas chapter of the motorcycle gang, has asked not to be identified because he is now in hiding and said he fears for his life.

Vehicle forfeiture efforts could be lucrative, but difficult in Twin Peaks shooting

As if they weren’t busy enough pursuing charges against some 170 suspects in the deadly Twin Peaks shooting, local criminal justice officials …

Police cleared out of the property of Twin Peaks on Tuesday, more than a week after a May 17 shooting that killed nine people and injured 18, …

County expenses in biker cases could have major budget impact

As lawyers threaten civil rights lawsuits, seek bond reductions and clamor that their biker clients have done nothing wrong, McLennan County i…

The jailing of 175 people in the deadly Twin Peaks shooting has left some local families in a desperate cycle of waiting, worrying and trying …

The building that once housed the Twin Peaks restaurant, where a May 17 shootout between biker gangs and law enforcement left nine bikers dead…

Three bikers jailed with more than 170 others for more than a week and a half after a deadly shootout at Twin Peaks were going home to Austin on Thursday, after winning significant bond reductions in an agreement with the McLennan County DA.

A Houston attorney’s media release alleging that jailed bikers were being forced to waive their rights to sue the city and county is false, bu…

Twenty-five bikers arrested in the May 17 shootout at Twin Peaks have been released from jail since Thursday, when prosecutors and defense att…

As attorneys for bikers jailed in connection with the deadly Twin Peaks shootout continue to negotiate their releases on reduced bonds, downto…

As more bikers are released from McLennan County Jail, the accounts of what led up to the deadly shootout at Twin Peaks come into sharper conf…

More than 500 motorcyclists rallied in downtown Waco on Sunday afternoon, uniting in the message that bikers are not criminals and protesting …

McLennan county commissioners Tuesday began what will be a monthslong discussion to assemble the fiscal year 2016 budget, which includes how t…

Prosecutors filed notices Tuesday of their intent to seize and forfeit 17 motorcycles, eight pickup trucks and two SUVs, alleging the vehicles are contraband.

Officials are releasing limited information and say disclosure of certain evidence, including videos of the incident, would compromise their investigation.

A Dallas attorney, seeking video of the May 17 biker shootout from the Twin Peaks restaurant franchisee, filed a motion Friday to sanction the…

A state district judge ruled Tuesday that a Dallas attorney can have a copy of a Twin Peaks franchisee’s video of the May 17 biker shootout, b…

Two days after a state district judge extended the term of a McLennan County grand jury to consider the Twin Peaks shootout case, he changed h…

FORT WORTH — The family of a biker slain in a shootout outside a Waco restaurant is suing the restaurant's parent company for negligence, acco…

Why background music matters while you work

Why background music matters while you work

Law enforcement and emergency medical personnel work the scene of a shooting at Twin Peaks on Sunday afternoon.