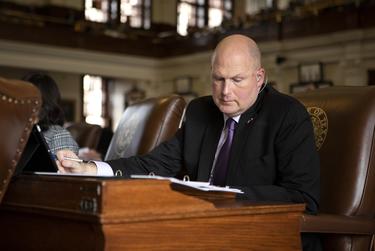 Need to stay updated on coronavirus news in Texas? Our evening roundup will help you stay on top of the day's latest updates. Sign up here.

State Rep. Tony Tinderholt was hospitalized last week after testing positive for the novel coronavirus, the lawmaker confirmed Friday to The Texas Tribune, marking the first known case involving a member of the Texas Legislature.

"I truly thought last Friday was gonna be my last," Tinderholt, an Arlington Republican, said in a text message to the Tribune. Tinderholt said his wife and two of his children also tested positive for the virus, though their symptoms were less severe.

Tinderholt said he is recovering after receiving medical treatment from a North Texas doctor. He and his family wore masks every time they went out in public because they felt it was the right thing to do, he said.

"I would like for people to try to mitigate risk by wearing masks," he said. "But wear them because you think it's right. I'm sure it works to some degree — it just didn't for me."

Medical experts and doctors have recommended wearing masks to reduce the spread of the virus, with recent research suggesting that wearing one could lessen the severity of symptoms or stop someone from catching it entirely.

Tinderholt is a member of the hardline conservative House Freedom Caucus, which has frequently criticized Gov. Greg Abbott's response to the pandemic — shutting down businesses and requiring masks in public — as government overreach.

In an April 24 letter to the governor, the caucus urged Abbott to "fully reopen" the state economy, arguing that the longer he waited to reopen, the longer it would take to recover.

"Too many jobs have been lost; too many sit at home as their livelihoods wither away, uncertain if they'll be able to pay their mortgage or buy groceries next week," read the letter, which included recommendations on how to reopen safely. "We must rebuild this economy by allowing those who built it in the first place to reopen."

While Tinderholt acknowledged the virus is a "serious illness," he reiterated Friday his position that Abbott shutting down parts of the economy is wrong.

"Closing the entire economy and halting business as well as illegally taking people's freedoms are absolutely the wrong things to do to Texas, Texans and our nation," Tinderholt said.

Tinderholt said his recovery was largely thanks to state Sen. Bob Hall, R-Edgewood, who referred him to Dr. Brian Procter of McKinney Family Medicine. Procter, Tinderholt said, told him that out of the few hundred patients he has seen so far for the coronavirus, the lawmaker was among "the worst five he had handled." Tinderholt said he was considered at risk for the virus due to his titanium aortic heart valve.

Tinderholt's first day of symptoms, he said, consisted of mild joint pain that soon turned into severe pain accompanied by bad headaches and a loss of taste and smell. Now, in recovery, he said he has nausea and a cough with slight breathing difficulties. He said he does not know how he caught it.

COMSTOCK, Texas (AP) — Exactly how the Devils River got its forbidding name is lost to history, but there is little doubt the harsh terrain an…

The state’s board of law examiners said in late July that test takers will be allowed to bring feminine hygiene products in clear plastic bags with them to the grueling, multiday exam that’s needed to obtain a law license.

DALLAS (AP) — Kim Peacock was once the purveyor of first-class luxury, but now her Arlington company has more than 87,000 pounds of nuts and n…

EDMONTON, Alberta (AP) — Will Carrier scored the tiebreaker with 5:12 left in the game, Robin Lehner had 24 saves and the Vegas Golden Knights…

After voluntarily publishing data, UT-Austin now has the unwelcome distinction of leading US colleges in COVID-19 cases

While some universities nationwide and in Texas are still refusing to disclose cases, UT-Austin set up a digital dashboard allowing community members to see updated student, faculty and staff cases. But the transparency has already proven to be a double-edged sword

Judge bars Cowboys for Trump leader from son over posts

RIO RANCHO, N.M. (AP) — The leader of the New Mexico group Cowboys for Trump has been barred from in-person visits with his son following soci…

Abbott said local health authorities can't shut down in-person instruction before school has even started. He said an outbreak on campus once students have arrived could prompt a closure by health authorities.

Texas collected $2.98 billion in sales tax revenue in July — 4.3% more than in July 2019. Comptroller Glenn Hegar said the number was "better than expected."