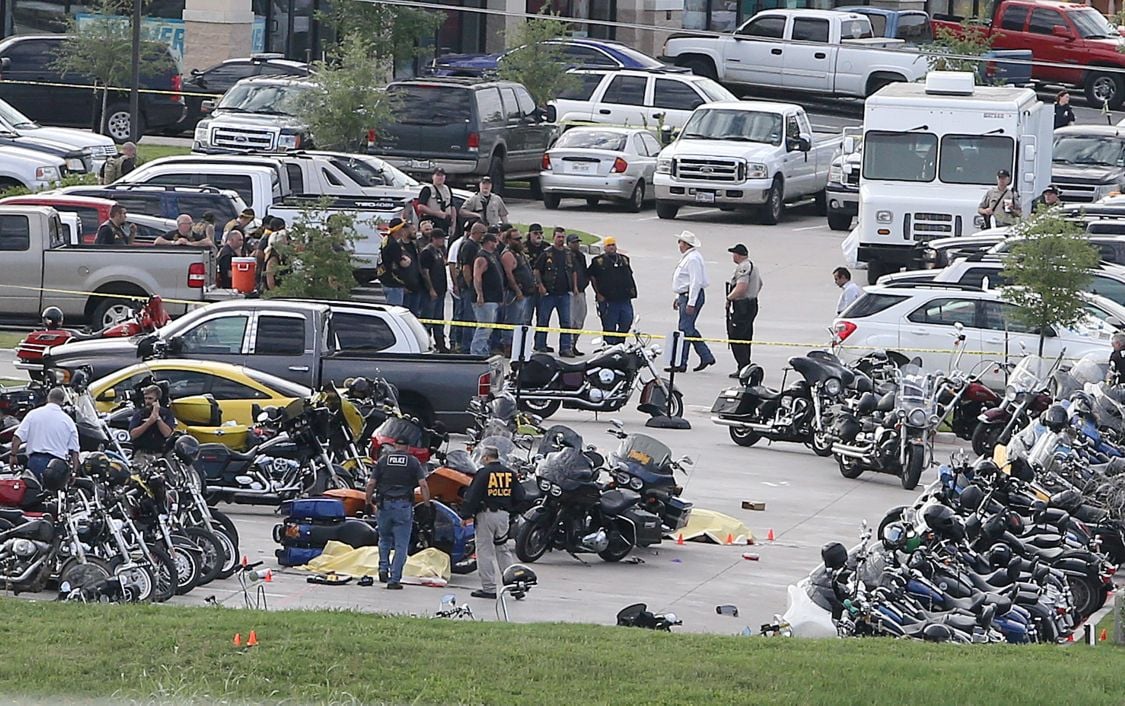 District Attorney Abel Reyna said a 10th name listed on indictments with the nine people killed in the May 17 Twin Peaks shootout was added by mistake. 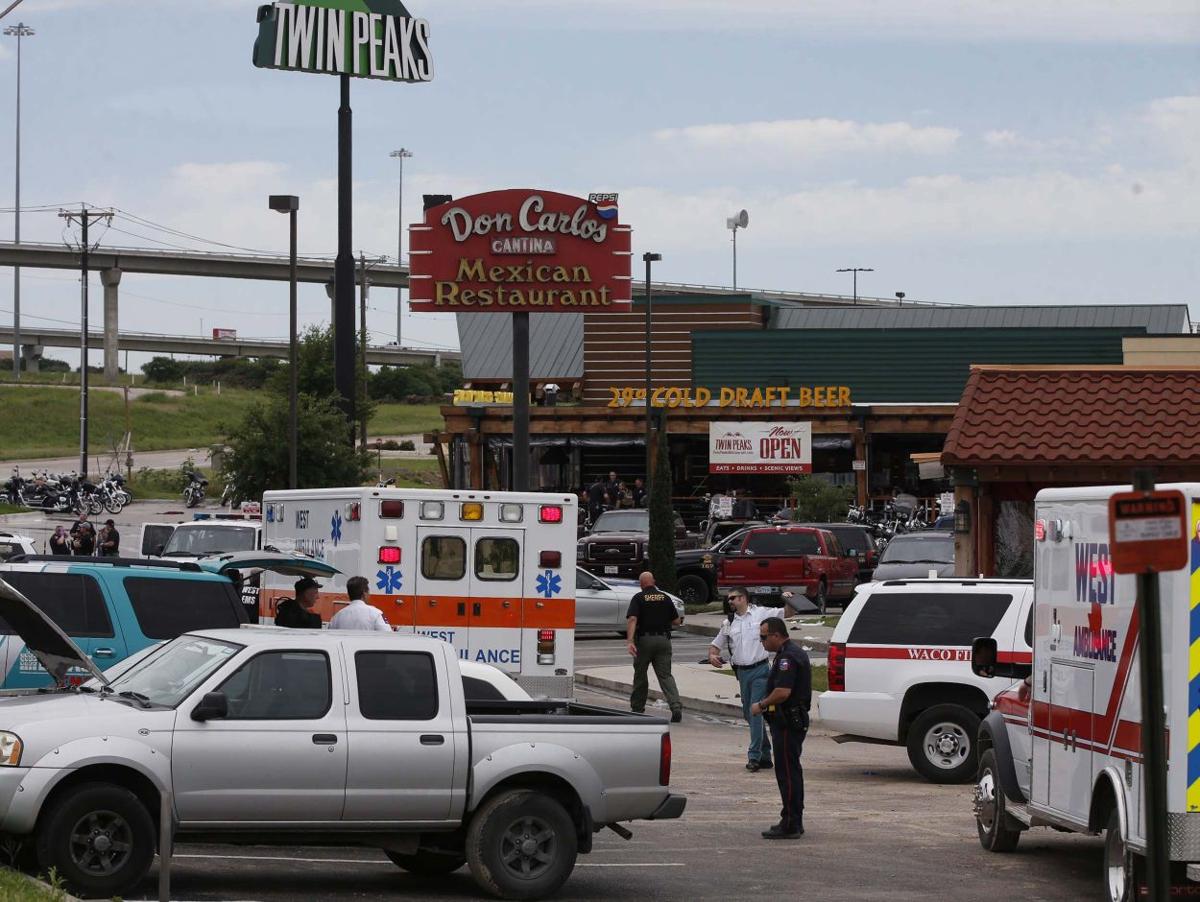 Law enforcement officers investigate the parking lot of the Twin Peaks restaurant in this May 17 file photo after the shooting. 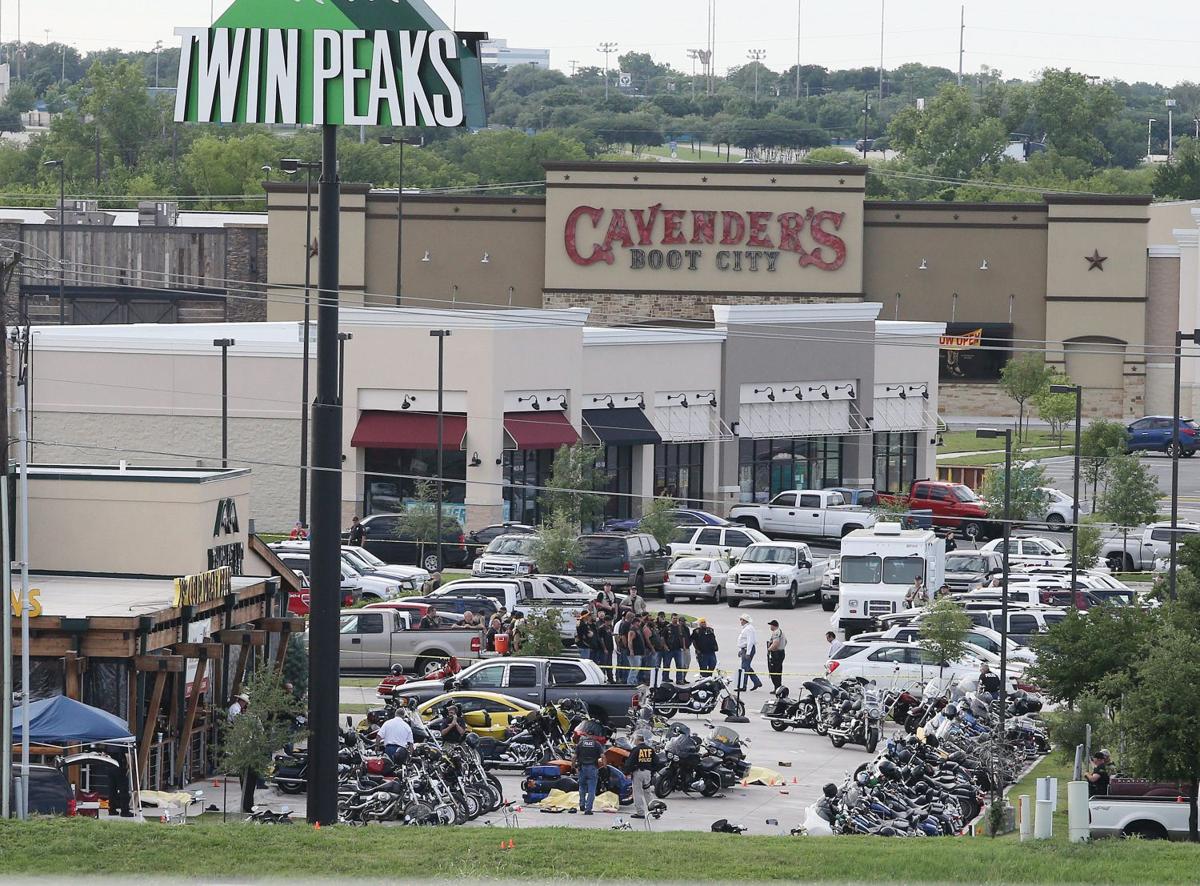 Law enforcement officers round up suspects in the parking lot of the Twin Peaks restaurant in this May 17 file photo after the shooting that left nine bikers dead. 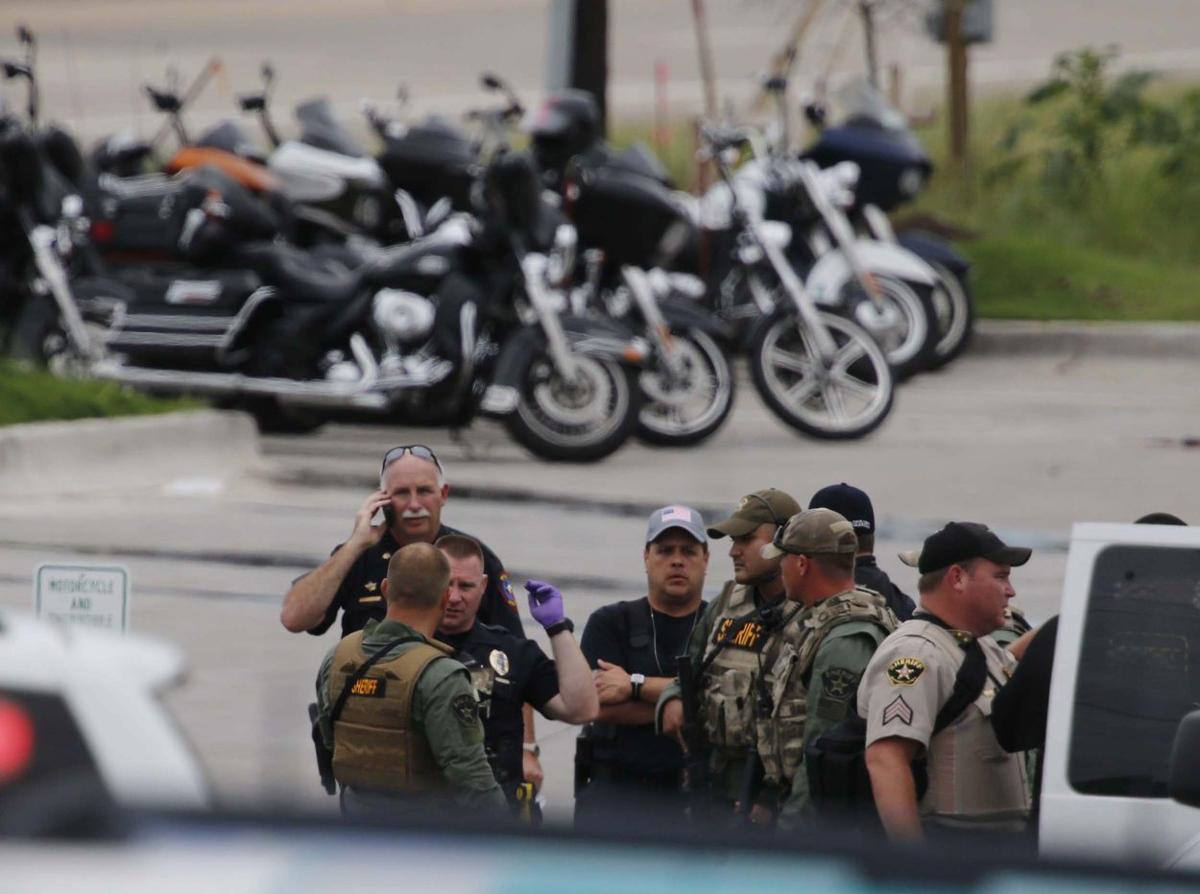 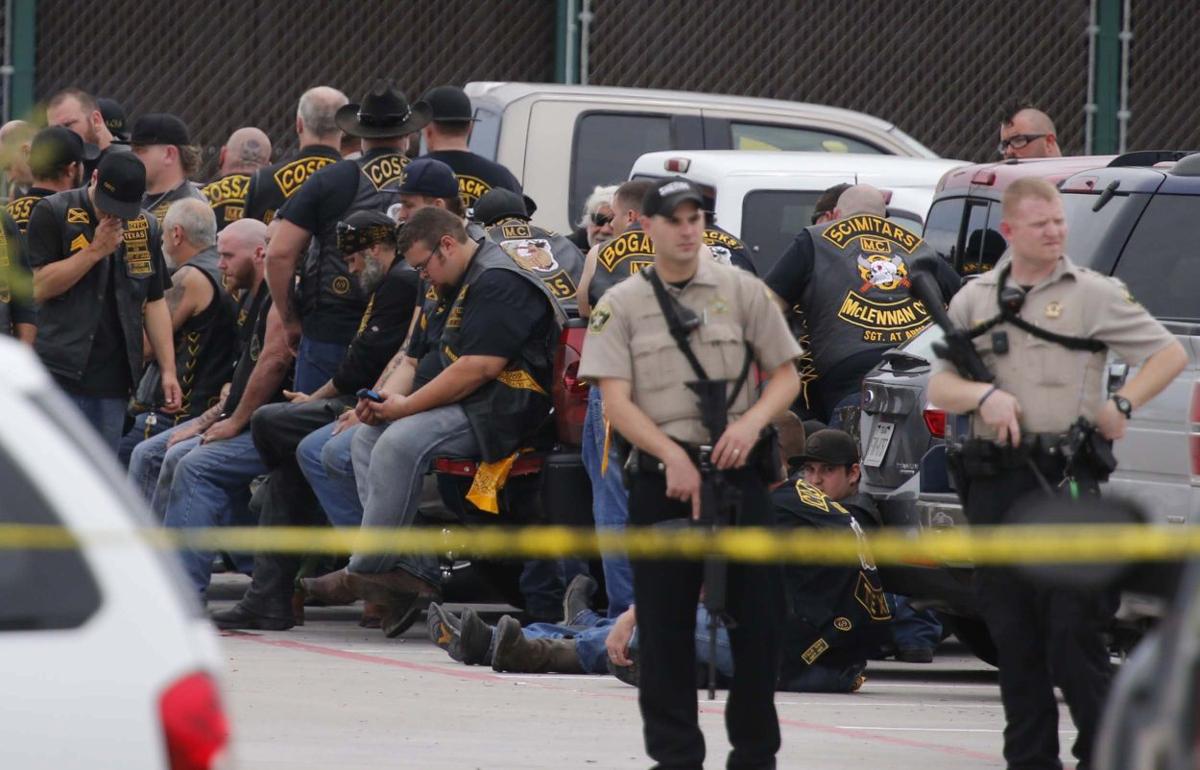 Four of the nine people killed in a melee between rival biker gangs outside a Twin Peaks restaurant were struck by the same caliber of rifle fired by Waco police, according to evidence obtained by The Associated Press that provides the most insight yet into whether authorities were responsible for any of the deaths and injuries.

The latest trove of potential grand jury evidence reviewed by the AP depicts a chaotic, bloody scene in which police swarmed into the shootout between rival biker gangs on May 17 outside the Twin Peaks restaurant that left about 20 wounded and arrested nearly 200 people.

Hours of audio and footage and hundreds of documents including ballistics reports show that four of the dead and at least one of the wounded were struck with bullets from .223-caliber rifles — the only type of weapon fired by police that day.

Two of the four dead had wounds from only that kind of rifle; the other two were shot by other kinds of guns as well. The ballistics reports show that the rest of the people killed were shot by a variety of other guns.

It was not clear whether any bikers had similar guns to the police that day. Among the hundreds of weapons authorities recovered from the scene were 12 long guns, which could include rifles.

The Southwestern Institute of Forensic Sciences, which conducted the ballistics analysis, declined to comment on its findings.

Waco Police Chief Brent Stroman had said in June that officers shot a total of 12 rounds using the semi-automatic setting on their .223-caliber rifles. The AP has previously reported that evidence showed some of those shots struck bikers, but didn’t indicate whether they were fatal.

Police and the district attorney’s office declined to comment on the latest evidence, but have previously defended the officers’ use of force, claiming that bikers had also opened fire on police. Police have previously cited a gag order in the criminal case of one of the bikers. Media groups including the AP have fought the order, contending that it is overly broad and unconstitutional.

Investigators have offered few details publicly about what sparked the fight or how the gunfire played out. Much of the narrative has come from the evidence obtained by the AP, including the latest batch of documents, footage, autopsy photos and audio of 911 calls and biker interviews describing how a feud between the Cossacks and Bandidos motorcycle gangs turned deadly.

Bikers have criticized the way police dealt with the incident and believe the ballistics findings prove that officers made the situation worse.

“I think they handled it badly,” said John Wilson, who was at the shooting and is a chapter president of the Cossacks. “I think their first responsibility is to be a deterrent to crime, not to set up and hope they get to use their rifles.”

The gunfire had erupted shortly before a meeting of a coalition of motorcycle clubs that says it advocates for rider safety. Waco police assigned 16 officers to watch over the gathering, and state police were present.

Police dashboard video shows a tight group gathered in front of the Twin Peaks patio. A biker can be seen striking others with a chain. Twenty seconds later, the biker is shot in the leg and the hip, staining the grass with blood. One biker shoots while running backward away from the parking lot while another fires from the patio. The group quickly disperses, with many taking cover behind cars and trucks.

Department of Public Safety video shows one of the men who was killed, Jesus Delgado Rodriguez, tackling another biker brandishing a gun. The two wrestle on the ground until another biker approaches and appears to stomp on Rodriguez’s head. The biker with the gun then shoots Rodriguez in the head and walks away.

In separate police video of the aftermath, several dead bikers are seen slumped on the ground, blood streaming from their wounds. Hats, sunglasses, knives, guns, cigarettes, and a hammer litter the pavement, while rock music can be heard playing loudly in the background.

Inside the restaurant, blood pools in the sink and floor of the men’s bathroom, and a baton and handgun are dumped into separate toilets.

“They got people shooting at people,” a man reports in a call to 911. During another 911 call, a man can be heard urging people to get in the cooler. In the background of that call, police can be heard saying, “Hands up! Everybody keep your (expletive) hands up!”

Authorities recovered more than 430 weapons, including 151 guns, knives, brass knuckles, clubs and a chain, according to a 724-page police incident report reviewed by the AP in September.

A grand jury indicted 106 people in November on charges of engaging in organized criminal activity. McLennan County District Attorney Abel Reyna has said the grand jury will consider charges against the other 80 bikers arrested on identical charges. The next session is scheduled for Wednesday, but Reyna has declined to say whether the rest of the cases will be presented that day.

Among other evidence reviewed by the AP are more than 100 police interviews with bikers who were arrested, several of whom attested to simmering tensions between the Cossacks and the Bandidos beforehand.

One Cossack told police the Bandidos had been trying to force his group to join the confederation of clubs in order to profit from $30 per month in dues each biker paid, and that this caused the animosity leading to the shootout.

In a separate interview, a Bandido who was shot in the leg claimed the Cossacks had long refused membership in the confederation. He denied that membership or dues were being forced on anyone.

WACO — The last person held in connection with a deadly shootout among bikers and police outside a Waco, Texas, restaurant has been released f…

District Attorney Abel Reyna said a 10th name listed on indictments with the nine people killed in the May 17 Twin Peaks shootout was added by mistake.

Law enforcement officers investigate the parking lot of the Twin Peaks restaurant in this May 17 file photo after the shooting.

Law enforcement officers round up suspects in the parking lot of the Twin Peaks restaurant in this May 17 file photo after the shooting that left nine bikers dead.