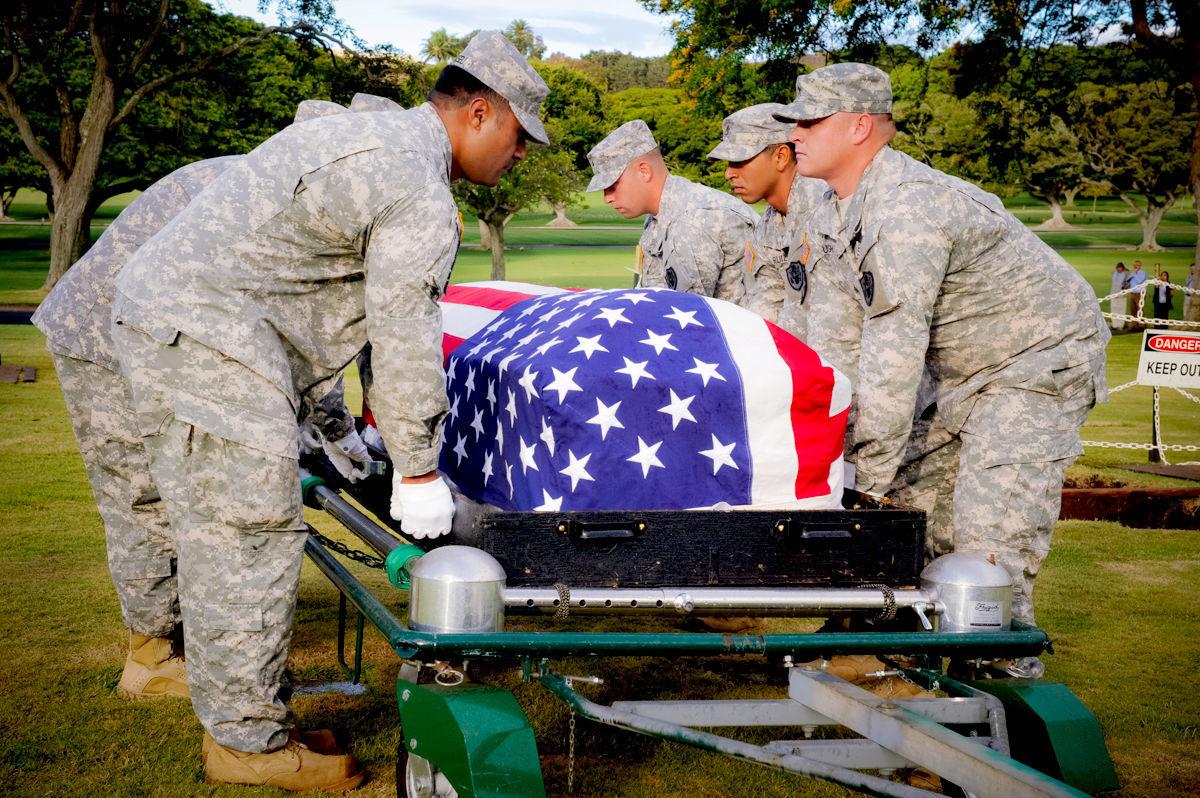 U.S. Service members from the Defense POW/MIA Accounting Agency (DPAA) participate in a disinternment ceremony at the National Cemetery of the the Pacific. DPAA holds these ceremonies to give honor and respect to the nation's unidentified dead before they are moved to the DPAA Laboratory for identification. 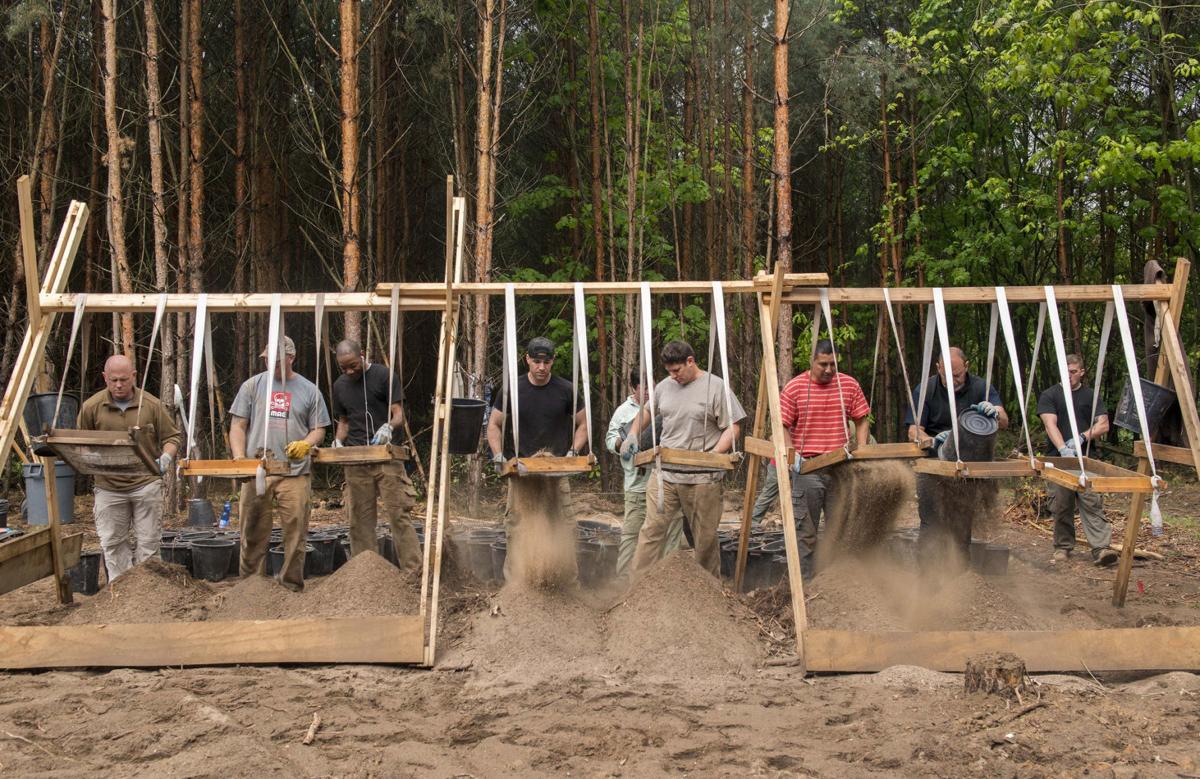 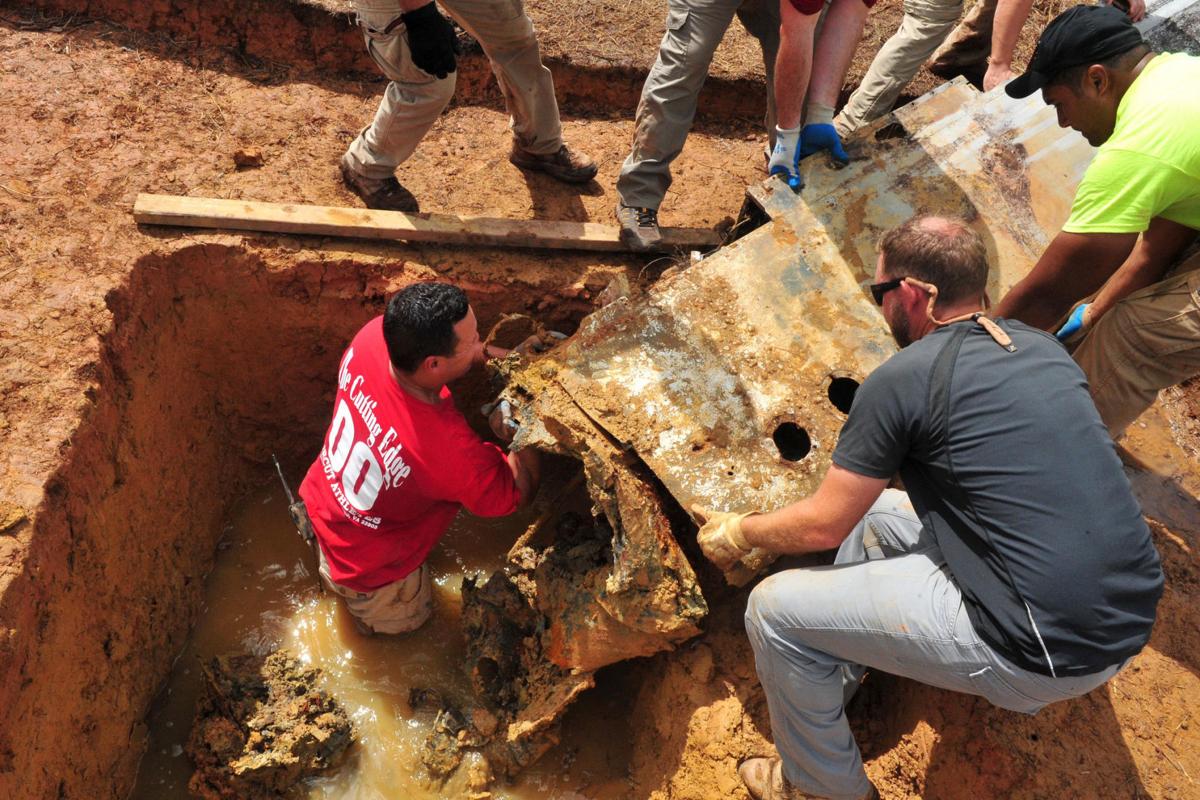 Members of the Defense POW/MIA Accounting Agency (DPAA) remove an aircraft wing during a recovery mission to locate a missing Navy pilot in Airai State, Palau. DPAA conducts global search, recovery and laboratory operations to identify unaccounted-for Americans from past conflicts in order to support the Department of Defense's personnel accounting efforts.

By MARY DRENNON Special to the Tribune-Herald

The numbers are staggering: More than 82,000 Americans remain missing from World War II, the Korean and Vietnam wars, the Gulf wars and other conflicts.

In Texas alone, there are nearly 2,000 still missing from WWII, Korea and Vietnam, according to statistics provided by the Defense POW/MIA Accounting Agency (DPAA).

But there’s one who has now been accounted for — local Waco native, Army Pfc. Lonnie B.C. Eichelberger, 20, a WWII veteran whose remains were recently identified by the DPAA. He was buried with full military honors on Jan. 10 in Houston.

Not much is known about Eichelberger’s private life in Waco.

What is known is that in February 1942, Eichelberger was a member of Company I, 371st Infantry Regiment, 92nd Infantry Division. In an era of racial segregation, the 92nd ID was the only African-American division to fight in Europe.

The division fought at the westernmost portion of the Allied line in northern Italy from November 1944 until April 1945. As part of Operation Fourth Term, Eichelberger's regiment fought in the hills near the town of Strettoia, Italy. His regiment suffered heavy losses while attacking German defenses.

Following the battle, Eichelberger could not be accounted for and was declared missing in action.

In July and August 1945, during search and recovery operations, American personnel recovered a set of remains, later designated as X-193, near Strettoia, Italy. Attempts to identify the remains were unsuccessful and they were buried as "Unknown" at the United States temporary military cemetery at Castelfiorentino, a town in the province of Florence in the Italian region of Tuscany.

On Sept. 14, 1948, Unknown X-193 was disinterred and transferred to the Leghorn Port Morgue, where the remains were declared unidentifiable and reinterred in Florence American Cemetery in April 1949.

Based on analysis of information associating X-193 with two individuals still unaccounted for from the 92nd ID, the remains were disinterred from the Florence American Cemetery on June 29, 2016.

To identify Eichelberger's remains, scientists from DPAA used dental and anthropological analysis, which matched his records, as well as circumstantial evidence.

Eichelberger's name is recorded on the Tablets of the Missing at the Sicily-Rome American Cemetery, an American Battle Monuments Commission site along with the other MIAs from WWII. A rosette will be placed next to his name to indicate he has been accounted for.

While Eichelberger had no family in Waco, a nephew, the Rev. Dr. Cheyenne Eichelberger of Richmond, Texas, was able to claim the remains.

“The Army made identification in 2015,” he said. “I was surprised, of course, because 70 years had passed.”

The reverend, who also served in the U.S. Navy for 21 years, was happy to be a part of history. The funeral on Jan. 10 was elaborate, with people who didn’t even know Eichelberger showing up to attend.

It took a lot of work to bring Eichelberger home. The DPAA mission means it takes everything on a case-by-case basis, individual by individual, family by family. It’s not about numbers, it’s about the fullest possible accounting of all Americans who are still missing from past conflicts dating back to World War II.

Of the 16 million Americans who served in World War II, more than 400,000 died during the war. Currently there are 72,964 service members (approximately 26,000 are assessed as possibly-recoverable) still unaccounted for from World War II.

“We also have a portion that we are missing in North Korea, and we haven’t been able to go over there,” said Sfc. Kristen Duus, chief of external communications at DPAA.

If it’s a crash, there may only be a few small pieces of remains. Remains are still unaccounted for in deep-water losses or if cases such as a boat that struck a mine.

For identification, DPAA conducts site excavations, DNA analysis, anthropological analysis, chest X-rays and dental records, family records, and circumstantial and material evidence examination, among others. It can be a lengthy process. The DPAA has remains from 1994 it’s still in the process of identifying.

“Presently, we have a very good idea of when and where most of those lost eventually died, and the locations of their burials. We will use this information in the planning for future excavations in Korea,” she said.

When a family member is recovered, “It’s a really happy reaction,” Duus said. “These people have been missing their family for years.”

With Vietnam veterans, especially, many family members are still actively searching. They still remember the servicemen personally, Duus said, rather than remembering them through passed-down stories from WWII.

The DPAA conducts seven annual briefings for families of missing service members. To find out more, go to www.dpaa.mil, reach out on social media at www.facebook.com/dodpaa, or call 703-699-1420.

In the meantime, the National Moment of Remembrance, established by Congress, asks Americans wherever they are to pause for one minute at 3 p.m., local time, on Memorial Day.

U.S. Service members from the Defense POW/MIA Accounting Agency (DPAA) participate in a disinternment ceremony at the National Cemetery of the the Pacific. DPAA holds these ceremonies to give honor and respect to the nation's unidentified dead before they are moved to the DPAA Laboratory for identification.

Members of the Defense POW/MIA Accounting Agency (DPAA) remove an aircraft wing during a recovery mission to locate a missing Navy pilot in Airai State, Palau. DPAA conducts global search, recovery and laboratory operations to identify unaccounted-for Americans from past conflicts in order to support the Department of Defense's personnel accounting efforts.