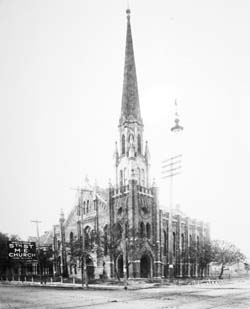 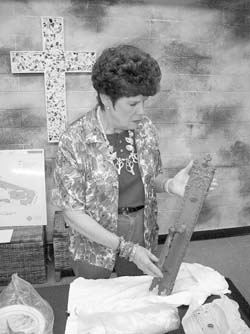 Linda Hammond, administrative assistant to Pastor Stephen Ramsdell of First United Methodist Church of Waco, handles a door iron from the original church building at Fifth Street and Jackson Avenue, which was demolished in the mid-1960s. The congregation has been gathering artifacts for the celebration of its 160th birthday this month.

By Terri Jo Ryan Special to the Tribune-Herald

Johnny Appell of Waco has been alive for more than half his beloved church’s 160 years here. He said he also owes his bride of 66 years to First United Methodist Church.

Appell, 86, and his wife, Beth Sample Appell, started church life after their births in 1924 as members of the same “cradle roll,” or nursery class, where their families were long-time members.

They grew up as “siblings in Christ,” as members of the Children’s Department, Young People’s Department and so on. After the Sunday School Halloween party in 1941, he said, Johnny asked Beth to go to the movies with him. They started dating and in September 1944. they married at First Methodist, with the Rev. G.P. Comer officiating.

They had a son, John Jr., and a daughter, Suzanne.

“The church has always played such an important role in our lives,” Johnny Appell said.

Beth, for example, was a teacher and superintendent of the Children’s Department for many years. And Johnny has led almost every committee at some point or the other.

“I tell people the only thing I wasn’t chairman of at First Methodist was the Women’s Society,” he said.

He led the fundraising drive when First Methodist endeavored in 1962 to leave its historic downtown home for a “patch of weeds” in northwest Waco, he said.

One of the saddest days of his life, he said, was when the lights went out for the last time at the old church in March 1963.

He and Beth, with their children in the backseat, watched from their car as the last of the congregation left the nearly 90-year-old building for the last time.

“It was like leaving part of your family behind,” Appell said.

On the banks of the Brazos

First United Methodist Church counts as its birthday the year of 1850, when the Rev. Joseph Perkins Sneed, a circuit-riding Methodist minister, preached to the inhabitants of Waco Village at the foot of Jackson Street, on the banks of the Brazos River.

Legend has it he bedded down under a tree near the old river ford, where travelers crossed the waters in the years before the Waco Suspension Bridge was built.

Sleeping on his saddle blanket, the preacher was awakened during the pre-dawn hours by the howling of wolves.

Waco’s Methodists built a church of oak and cedar wooden planks at Second Street and Jackson Avenue in the summer of 1851, at a cost of $1,000 (about $25,500 in modern funding).

The planks were planed at a horse-drawn sawmill just south of town. The first church structure in Waco. It was also used periodically by the Baptists and Presbyterians, who also were forming congregations in the young village.

People reportedly traveled by wagon or horseback as far as 100 miles to attend the dedicatory services in Waco. The congregation at the time was almost 160 people.

That structure was sold a decade later, as the city’s Methodists met in the second-floor auditorium of Waco Female College, a church institution. The school property was bounded by Webster, Jackson, Third and Second streets.

The building was designed by W.C. Dodson. The inaugural service took place in November 1879.

First Church, known as the Mother of Methodism in Central Texas, helped other congregations sprout throughout McLennan County, and was a leader in the movement to bring the Methodist Children’s Home to Waco in the early 1890s.

The church had its share of colorful characters in the pulpit. The Rev. G. P. Comer (1904-89) was pastor of First Methodist from 1936-46, the second longest pastorate in the congregation’s history.

When he was first appointed by the bishop, the church was heavily in debt. But by the time he left it to become a full-time traveling evangelist, all debts had been retired and money was in the bank, according to a church historian.

Comer’s flashy appearance and fiery sermons earned him the nicknames “Dixie Fireball” and “The Kentucky Wonder,” as well as a wide following on the Christian preachers’ circuit.

Many Texans also knew him in later years as “The Singing Parson” who led carols each Christmas at Nieman-Marcus and other locations.

First Methodist celebrated its first century in March 1950, with a two-night pageant featuring 150 church members and a historical plaque unveiling with Gov. Allan Shivers and radio coverage in Waco and Dallas.

Three years later, on May 11, 1953, the church was heavily damaged by the tornado that swept through downtown and killed 114 people.

The steeple, a well-known community landmark, toppled because of the winds, falling across the railroad tracks that ran past the church.

The church’s insurance only covered two-thirds of the cost of replacing the steeple, but the project was made possible through the donations that poured in from other segments of the community and former Waco residents who had fond memories of the place.

In less than six months, the totally refurbished First Methodist building was re-dedicated, in better shape than it had been before the storm, according to most accounts.

More than 5 acres of land had been donated to the church on northwest Waco, and the decision was made to move the First family there.

Ground was broken in April 1962 at Lake Air and Cobbs Drive for the facility that was dedicated in March 1963. The 1876 cornerstone was given a prominent place in the history corner of the church foyer, and the old theater organ (a hand-me-down from the Waco Hippodrome when the days of silent movies ended in 1928) made the transition to new quarters as well.

The old First Methodist, the circa-1877 structure that remained downtown, was demolished in September 1963.

Bricks made of Brazos River sand, the baptismal font, plaster cherubs and stained glass windows — as well as the 1953 steeple — were left behind to be salvaged and sold by the demolition crew.

Some of the bricks can be found in some Waco homes or businesses to this day, according to Linda Hammond, assistant to the pastor.

Linda Hammond, administrative assistant to Pastor Stephen Ramsdell of First United Methodist Church of Waco, handles a door iron from the original church building at Fifth Street and Jackson Avenue, which was demolished in the mid-1960s. The congregation has been gathering artifacts for the celebration of its 160th birthday this month.