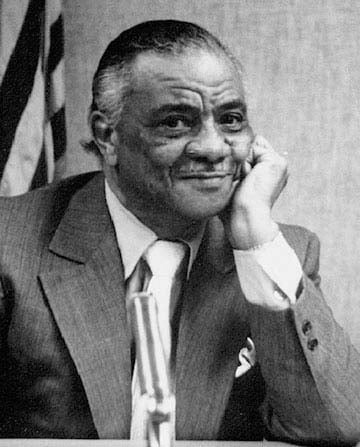 Oscar Norbert DuConge (1909-1978) was the first black person to head a metropolitan municipality in Texas. 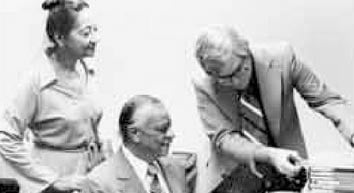 DuConge (pronounced Dew-con-jay) first rose to local political prominence when he was elected to Waco City Council in 1972. He was only the second successful black candidate for a slot, following dentist G.H. Radford Sr.’s election in 1966.

A native of New Orleans, DuConge came to Waco after World War II with his wife, Mary Euphemia Jacques DuConge.

Oscar DuConge was born in Pass Christian, Miss., on April 19, 1909, and spent his childhood in New Orleans, La.

The ninth of 14 children, DuConge went to work an early age, sweeping floors and cleaning utensils in the barbershop where his father worked. His mother taught music and gave sewing lessons in their home.

DuConge later said his family’s budget was operated as a “community chest,” with the girls working at home and the boys getting odd jobs to pour into the pot and his mother disbursed the funds as needed.

Their thrifty ways enabled DuConge and nine of his siblings to get college educations.

He earned a bachelor’s degree in sociology from Xavier University in New Orleans in 1931. He married his childhood sweetheart, who was better known by her nickname, Kitty, in 1937, and in 1942 he was drafted into the U.S. Army.

His wife secured a secretarial job at Fort Huachuca, Ariz., where he was stationed with the finance department.

Oscar DuConge later volunteered for combat duty. Assigned to an infantry unit, he came under fire in North Africa and Italy before he left the service in September 1945.

DuConge returned to school to get a master’s degree in social work in 1946 at Atlanta University in Georgia. Other postgraduate work was completed at Southern University in Baton Rouge, La.; University of Pittsburgh; and Xavier.

The DuConges came to Waco in September 1948, when Oscar DuConge was hired as a psychiatric social worker for the VA hospital. His wife found work the next year as a secretary at James Connally Air Force Base — the first black woman in that civilian position.

She worked there six years before resigning to raise their adopted son, Michael, and remained active in area Catholic charities. She later worked for the Veterans Administration and other governmental institutions before retiring in the 1970s.

In June 1966, Oscar DuConge was named the director of Neighborhood Centers for the Economic Opportunities Advancement Corp. in Waco. Six years later, the job title was changed to director of community programming.

He also was secretary-treasurer of the Doris Miller Memorial Park, a cemetery, from 1955 to 1972.

After a failed run for the school board in 1970, he was “drafted” by constituents to run for city council in 1972, when he sought the East Waco seat held by the retiring Radford.

Defeating his white opponent, a high school administrator named M.D. Ritcherson, DuConge earned the affection of his ward and the respect of his council colleagues. He ran unopposed in 1974 to keep the seat.

The respect he garnered led to his selection as the city’s mayor. As reported by the Dallas Morning News on April 13, 1974: “Black and Catholic, DuConge was selected this week by his white fellow councilmen to serve as mayor of this predominantly Baptist city which in the past has been white ruled.”

DuConge said the vote of his colleagues was indicative of the societal changes sweeping the country in that late civil rights era.

“Despite all the problems in the United States and Waco, it took five white men to elect a black,” he said. “I’m not mayor of any faction or group. I’m mayor of Waco. This means I will do what I can for as many people as I can.”

After leaving the council in 1975, he remained active in civic affairs and charity in Greater Waco, promoting racial harmony and fighting to eradicate poverty.

Oscar DuConge died at age 69 on July 26, 1978. Kitty DuConge continued to be active in the community until her decline in health and eventual death on Aug. 31, 1999.

Oscar Norbert DuConge (1909-1978) was the first black person to head a metropolitan municipality in Texas.