A spoiler alert for those who thrill to tales of an evil hag who lured the unwary to her stone castle in the woods around Cameron Park.

Like Dorothy in “The Wizard of Oz,” a retired Waco surveyor has some cold water to throw on that witch story.

John Kamenec has compiled a briefcase full of deed records, genealogies and old newspaper accounts of the so-called “Witch’s Castle” property at the end of Adeline Drive. His conclusion: No witch, no castle, just a humble cabin that burned in 1961, leaving the ruins of a stone gate and retaining walls.

Kamenec said he suspects the stories of the witch sprang up in the fevered imaginations of teenagers who would slip away to the secluded spot to drink beer and try to scare one another.

Kamenec, who serves on the McLennan County Historical Commission, usually turns his research skills to weightier topics such as World War I’s Army base, Camp MacArthur. But he became intrigued by the Witch’s Castle site some years ago when he was working on cemetery research at the county clerk’s office. He ran into then-owner Coy Weber, who told him the legend.

“I’m intrigued by everything,” Kamenec said, adding that he didn’t mind spoiling a perfectly good piece of local folklore.

“I deal in facts: numbers, facts, verifiable articles,” he said.

But Kamenec was not content to debunk an urban legend. His painstaking research has uncovered an intriguing non-paranormal history of the site dating back 150 years, including a long-vanished African-American church site and cemetery and an infamous Waco madam who once owned property next door.

Trent Dougherty, manager of the Ranch at Cameron Park, said Kamenec’s history is more interesting than the folklore, anyway.

“The lore draws you in, the myth draws you in, but it’s the history that really got me interested, which is why I was glad when John called,” Dougherty said. “The first time I ever saw these ruins I thought, ‘I wonder who did this?’ I was looking past the junk and thinking this was really cool. When I got John’s letter it was really a godsend. I had wondered about these things but didn’t have the time and skill to look it up.”

Dougherty and volunteers from the Waco Bicycle Club have been transforming the brushy backcountry just west of Cameron Park into a mountain bike course connected to the park’s trails. Waco businessman and cyclist Todd Behringer bought 28-acre site for recreational use in 2014, and it is open to visitors who sign a liability waiver available at bikecommander.weebly.com/ranchcp.html.

Before the restoration started, the site was littered with broken bottles and overgrown with invasive ligustrum. A stone arch marking the entry to the old homesite was defaced with graffiti. Still, the rocky ruins, shaded by tall cedars, had a certain spooky charm.

The house was elevated on a foundation with retaining walls several feet high, made of limestone and concrete rubble. Around the site are old brick house piers and a ruined two-seater outhouse.

“It shows you she was a witch of a normal nature,” Kamenec deadpanned.

Kamenec said the old house site was once called “Eagle Rock” and is the highest point in the Cameron Park area, once offering views of the Brazos River valley up to Lacy-Lakeview before trees and brush grew up. The hardscrabble landscape, between the Waco Center for Youth and Cameron Park Drive, is dominated by old-growth juniper in limestone caliche soil. It was known since the 19th century as “the cedar brakes.”

The original cottage, sitting on a three-acre tract with an official address of 3613 Greenwood Drive, was constructed in 1912 by Barnes Lumber Co. for one Thompson Dillard. It was no castle: It was built of wood, 20 by 40 feet in size, with a screen porch and tin roof and apparently no water source.

But visitors can thank Elmore Rack for the romantic ruins they see today. A downtown merchant and civic leader, Rack bought the cottage as a getaway cabin in the 1930s, and he added the retaining walls and stone arch entrance, according to a Feb. 15, 1942, article in the Tribune-Herald. He raised the cabin up several feet on new piers and brought in decorative egg-shaped boulders he collected from the Falls of the Brazos near Marlin.

He spread pecan hulls as mulch to improve the soil and blasted holes in the rocky soil in a failed attempt to grow poplar trees.

Kamenec tracked down Rack’s son, John Elmore Rack, who recalled that the family called the property the “Monkey Ranch” because it was a place to monkey around.

The cottage was later a rent house and was vacant by March 29, 1961, when it went up in flames. The fire department stretched hoses from blocks away, but the house was a total loss. Elmore Rack, who died in 1988 at the age of 91, left the property to his son, John, who sold it to Coy and Virginia Weber in 1995. By then, the site’s spooky reputation, witch and all, was already well established and its real history obscured.

It took Kamenec to piece together the history of the cedar brakes area, digging all the way back to the post-Civil War era.

He discovered that a widow named Mary Augustus Wilson, who owned 100 acres between Mouth of the Bosque and the stone arch, sold off that property in four- and five-acre tracts after the Civil War.

One of the buyers was Armstead Ross, a former slave who had built the first house in Waco for the Shapley Prince Ross family. Armstead Ross, a drayman by trade, would amass more than 35 acres in what is now the Cameron Park area. When he died in 1883, prominent civic leaders served as his pallbearers, and a local newspaper said his holdings were worth some $10,000, which would be about $230,000 in today’s economy.

After the Civil War, a small African-American community emerged in the cedar brakes. Those residents established Lovers Leap Baptist Church at the edge of a ravine in 1883, moving a few years to another site close by and ultimately to its current site at 301 Bosque Blvd.

The church in the cedars also included a cemetery, now vanished. Kamenec has tracked down the identity of three of its deceased denizens, buried between 1900 and 1915. One is Nathan Hodge, 80, buried in 1900. An 1878 article refers to a tragic house fire in the cedar brakes that took the lives of two sons of Hodge, a “crippled” black man known as a farmer and apple vendor.

Into the 20th century, the cedar brakes were known as a haven for moonshiners. In 1912, a famous Waco businesswoman bought nine acres next to the Witch’s Castle site. Mollie Adams, who was the leading madame of the Reservation red-light district in downtown Waco, apparently had a house there on Adeline Drive, which was then part of Bosqueville Road.

The U.S. Army shut down the Reservation in 1917 as a condition to building Camp MacArthur here. As it happened, the edge of the vast Army encampment was just across the street from Adams’ house in the cedar brakes. Whether she plied her trade at that property before she sold it in April 1918 is lost to history.

Ghost stories about Cameron Park showed up as early as the 1920s, but folklore about the Adeline Drive site is of more recent vintage, said Bradley Turner, a McLennan Community College associate professor and author of “Cotton Bales, Goatmen and Witches: Legends from the Heart of Texas.”

“Of all the legends I’ve heard, virtually none of the older legends involve that archway,” Turner said. “It’s all been since the 1960s.”

A forerunner of the Witch’s Castle story involves a woman who went mad with grief after her son died in World War I, leaving her to haunt the cedars of Cameron Park. In some versions, the Cameron Park witch is merely an eccentric recluse, but after the 1960s, she becomes a malevolent figure out of a B horror movie or “Hansel and Gretel,” luring people to her castle to kill and eat them.

Turner said his interest is in how these fictional stories change over the decades and get adapted to particular times and places.

“I love studying social memory and culture,” he said. “I approach a legend the same way you would an Aggie joke. You just listen to the punch line. I couldn’t care less if they’re fake or true.”

Even the dogged researcher of the cedar brakes has to make a concession on that point. Kamenec, too, calls the old Elmore Rack place the Witch’s Castle.

Watch Now: Can you transmit COVID after vaccination?

Watch Now: Can you transmit COVID after vaccination? 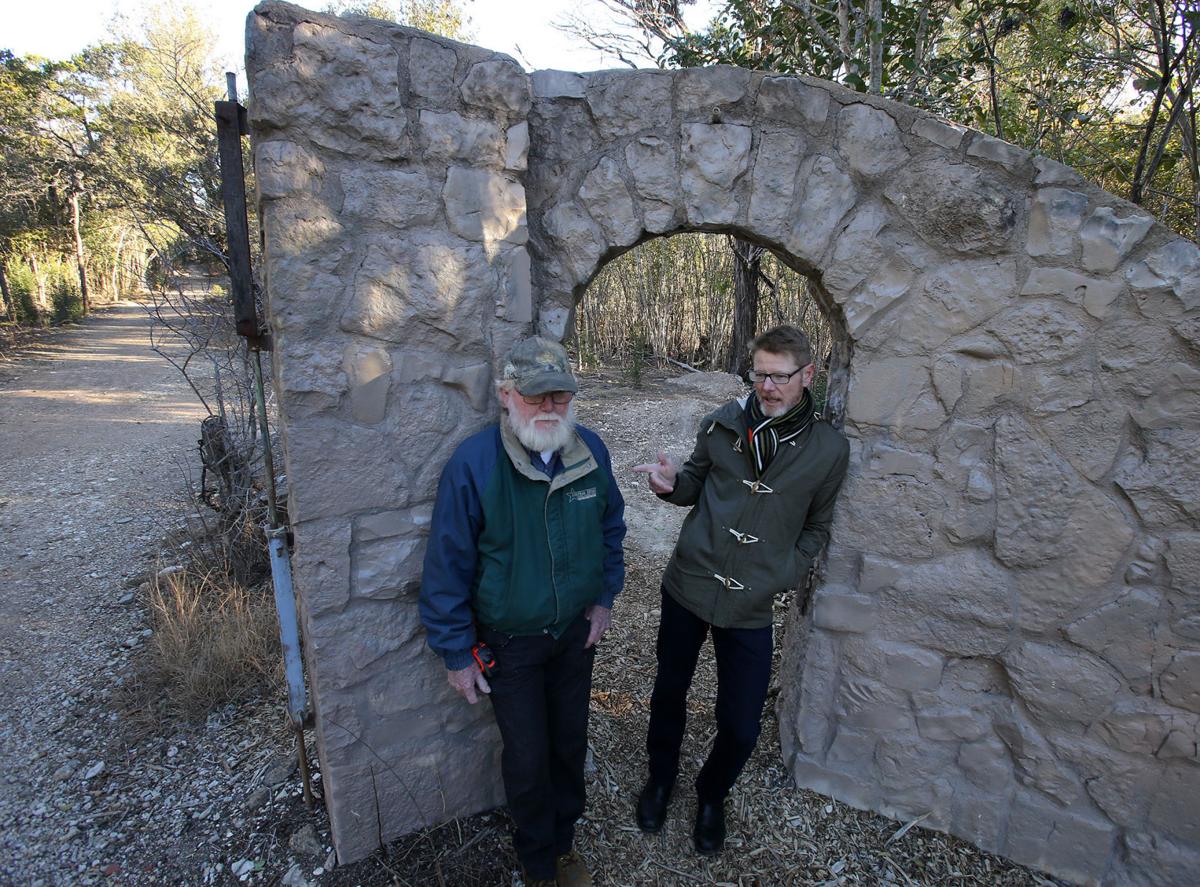 Local historian John Kamenec (left) and Ranch at Cameron Park manager Trent Dougherty stand at the remains of the front gate of the Witch’s Castle, which was actually a small cottage that was built in 1912 and burned in the ’60s. 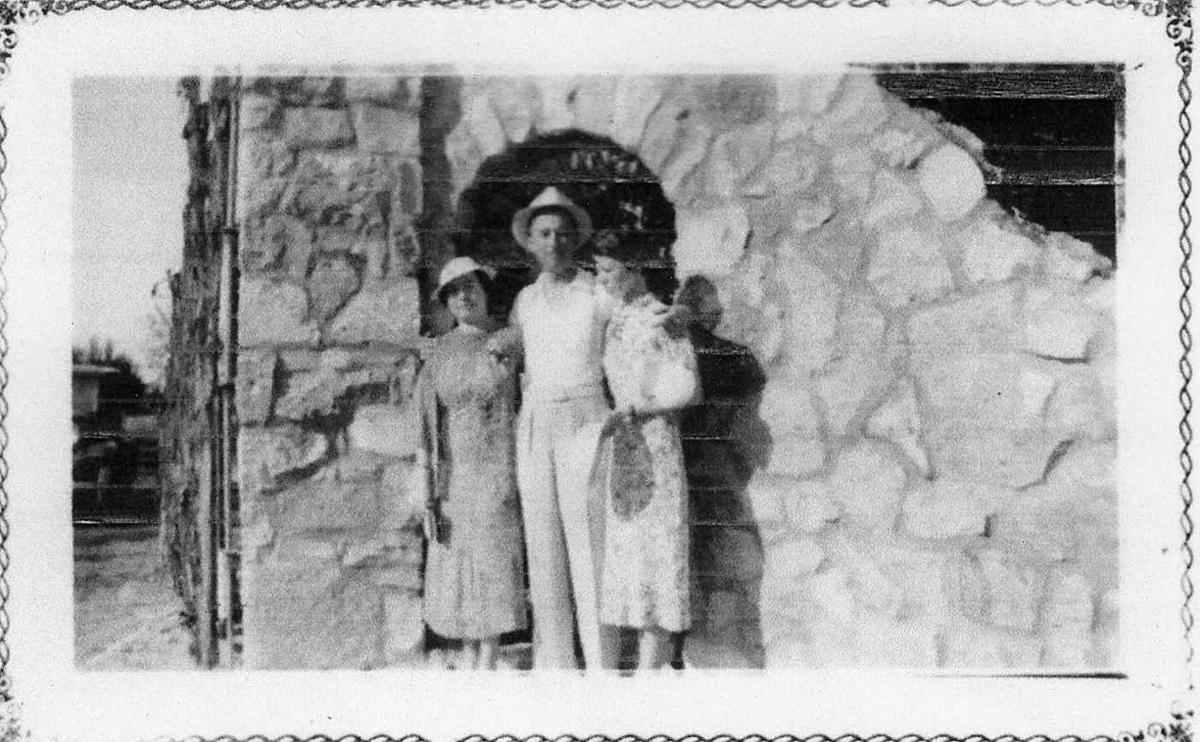 Visitor Milton Kuschke (center) with his wife, Ruby (right) and sister, Lillian, pose at the stone gate outside Elmore Rack’s cottage in the cedar brakes. Kuschke was a relative of Rack’s from Temple. 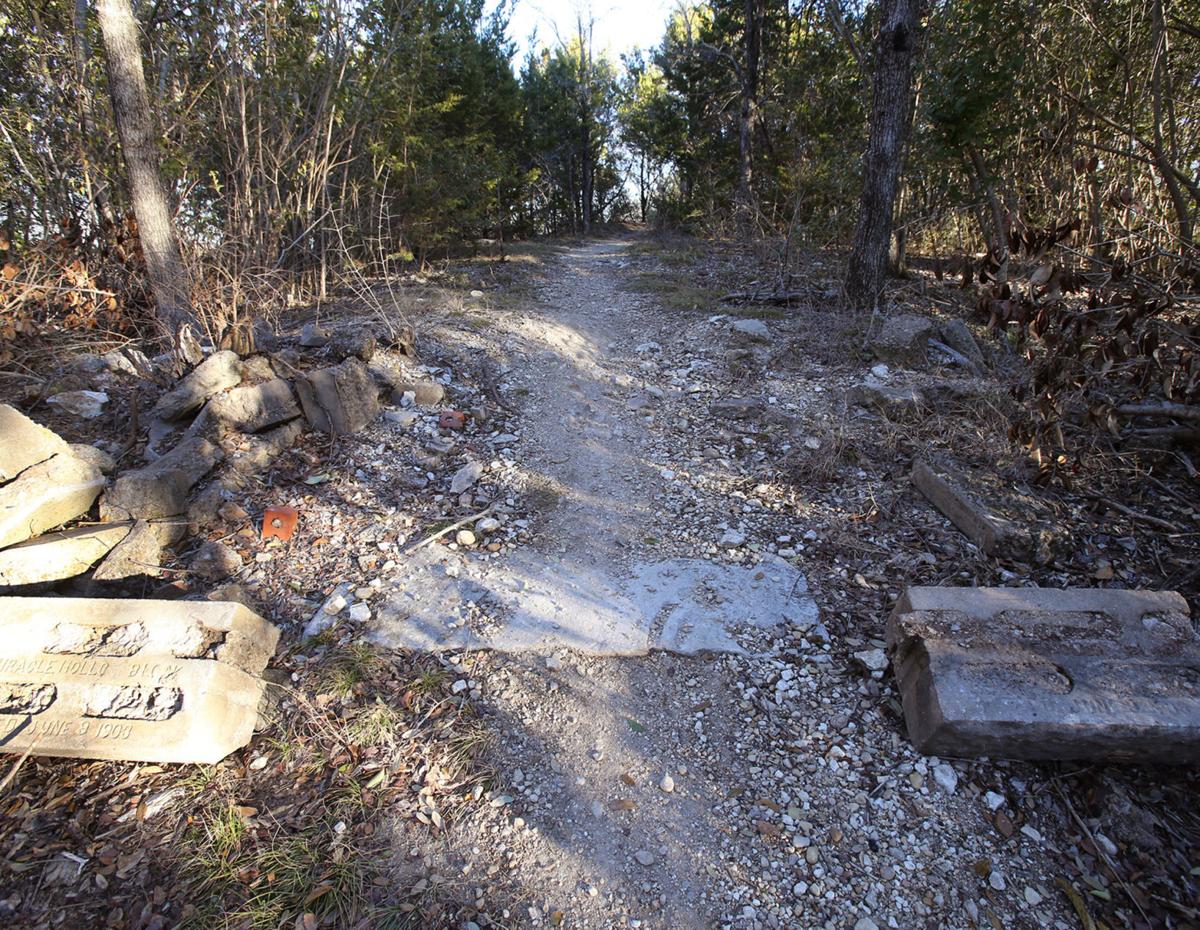 The remains of the front doorway of the Witch’s Castle — actually, an old vacation cottage — is now part of a bicycle trail. 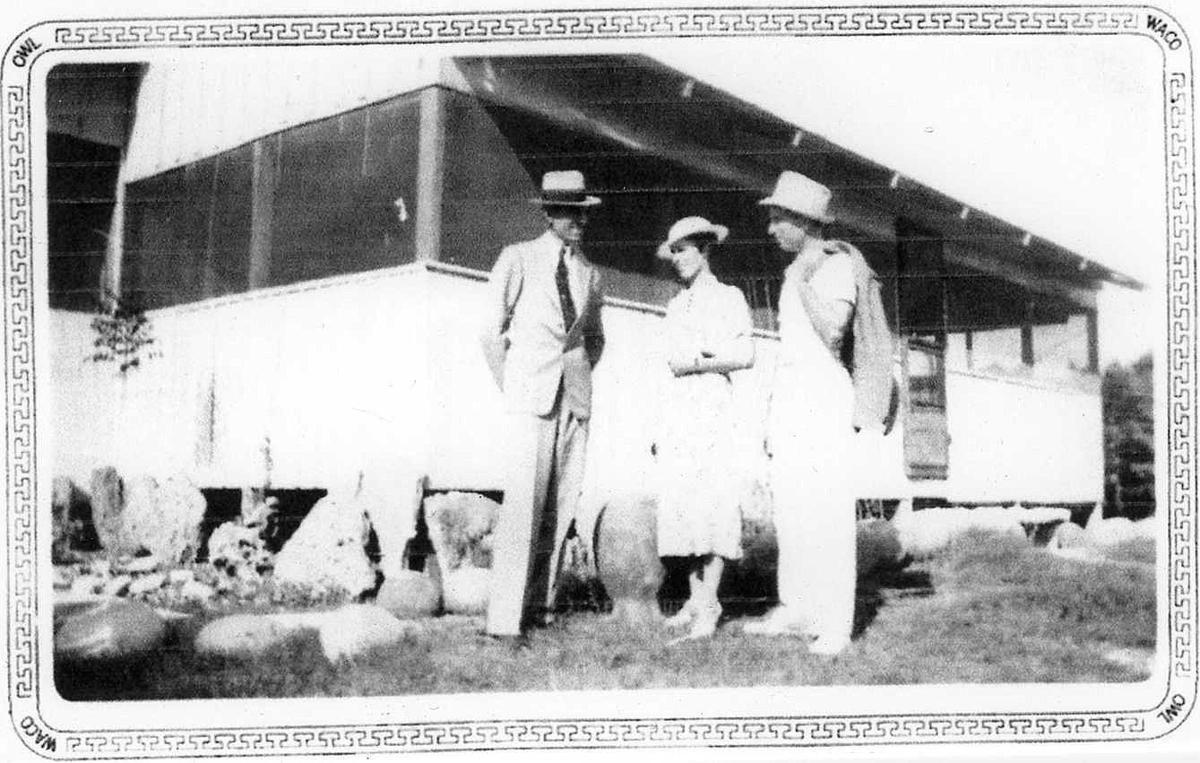 Elmore Rack (left) stands with his relatives, Ruby and Milton Kuschke, outside his cottage that has since given rise to lore about a Witch’s Castle in Cameron Park. 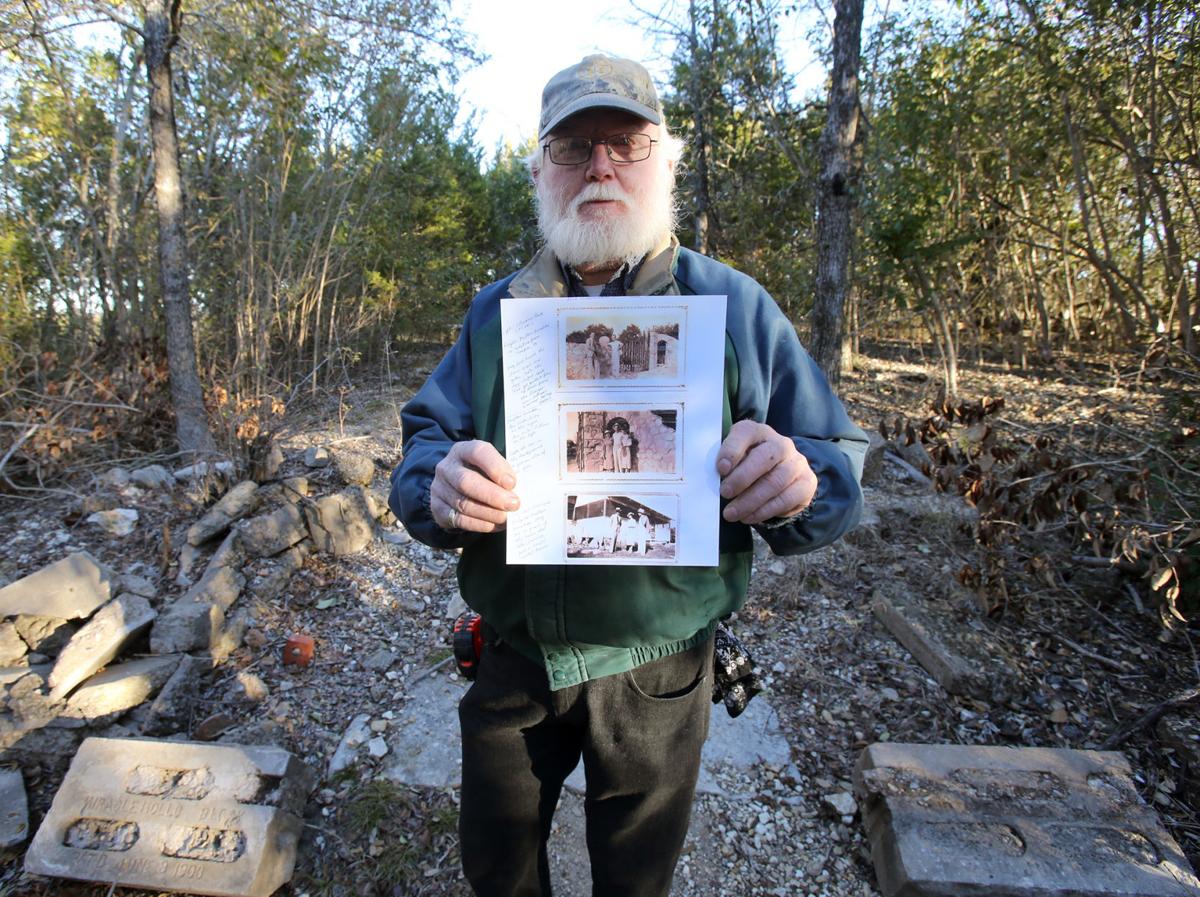 Local historian John Kamenec holds historical photos as he stands at the Witch’s Castle site. The front entrance of the “castle,” actually a small cottage, now serves as part of a mountain bike trail.

Old photos of the property and its owner sit on a retaining wall that was part of the Witch’s Castle. The “castle” was actually a small cottage that burned in the ‘60s, and a stone gateway arch still stands. 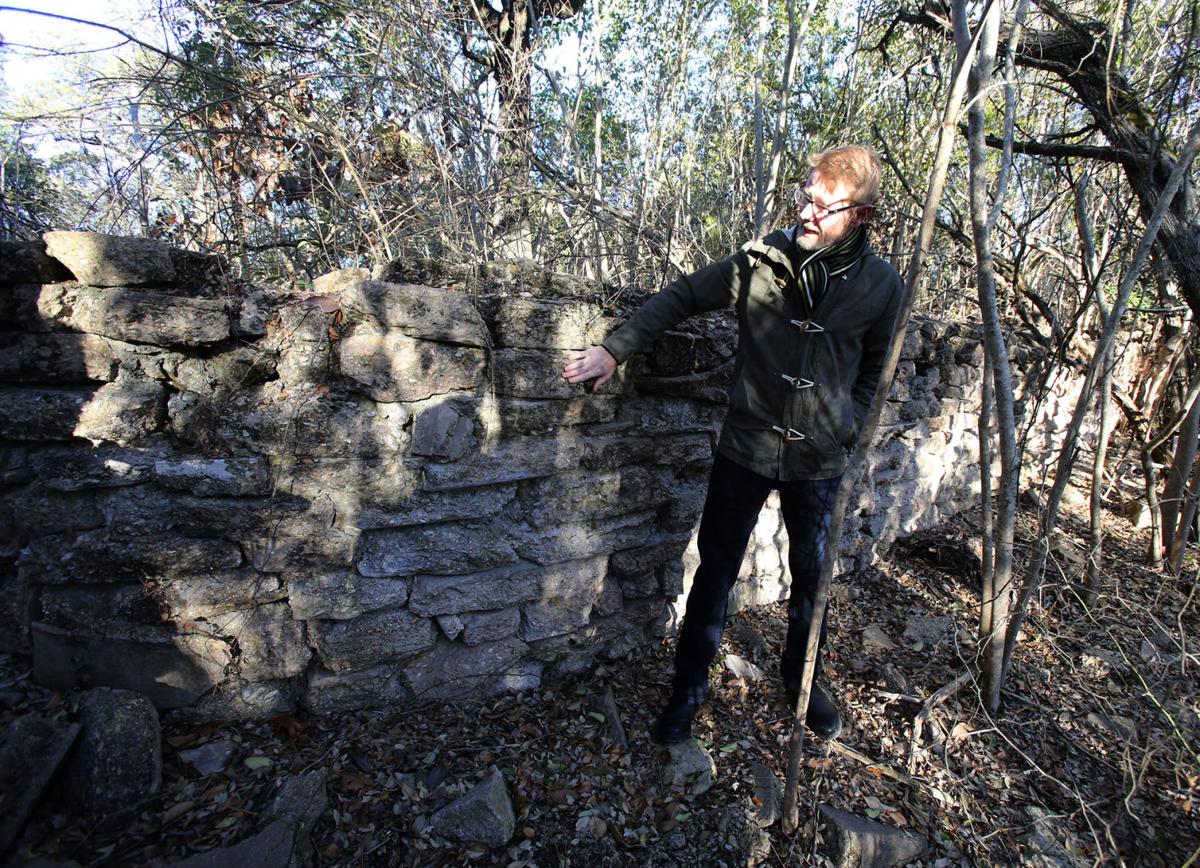 Ranch at Cameron Park manager Trent Dougherty points out a retaining wall at the old house site known as the Witch’s Castle. 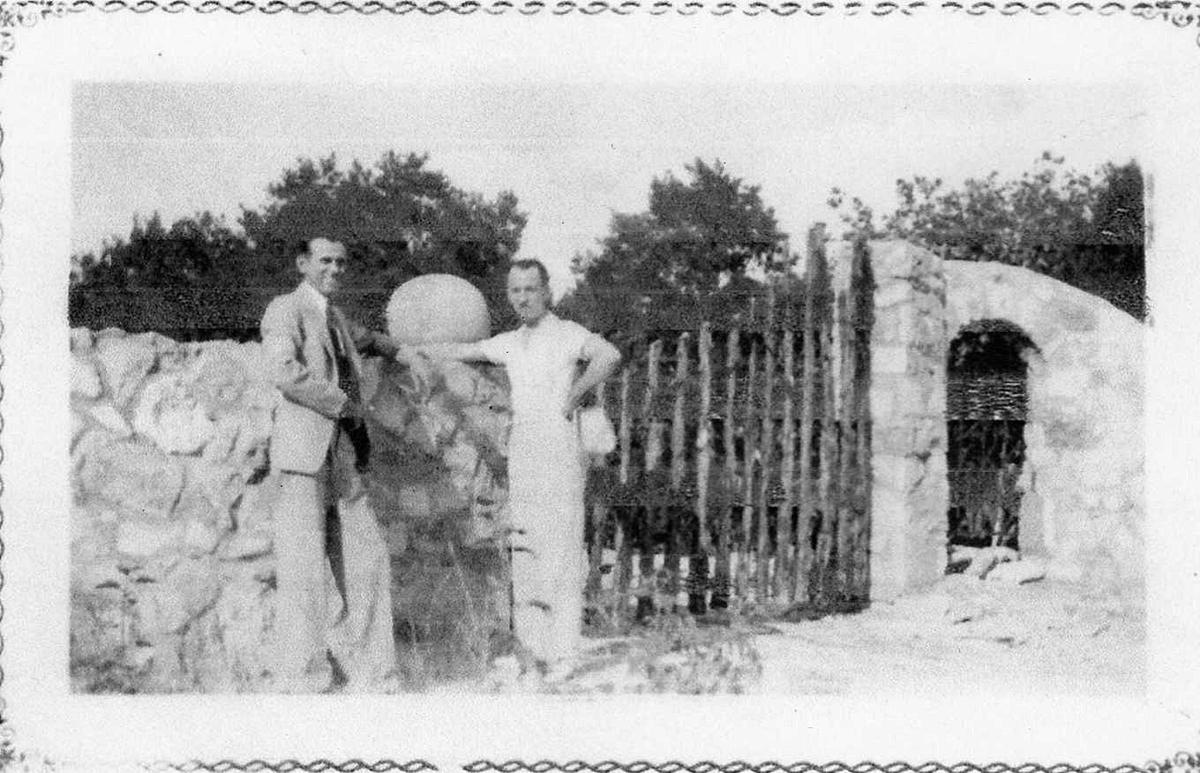 Owner Elmore Rack (left) stands with Milton Kuschke, a relative from Temple, at a stone wall whose ruins have given rise to lore about Cameron Park’s Witch’s Castle.