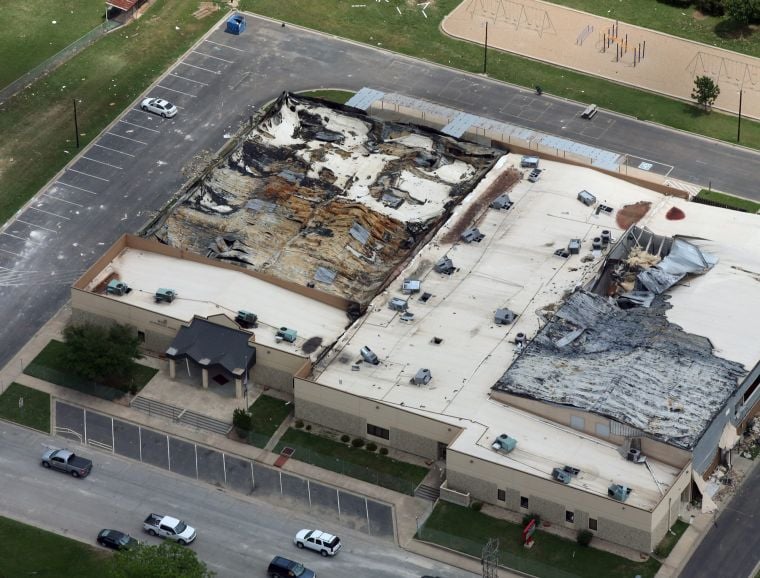 An areial view of damage done to the West Intermediate School in the April 17 fertilizer plant explosion. FEMA has denied West additional aid that would have helped the district repair or rebuild three damaged campuses.$RETURN$$RETURN$ 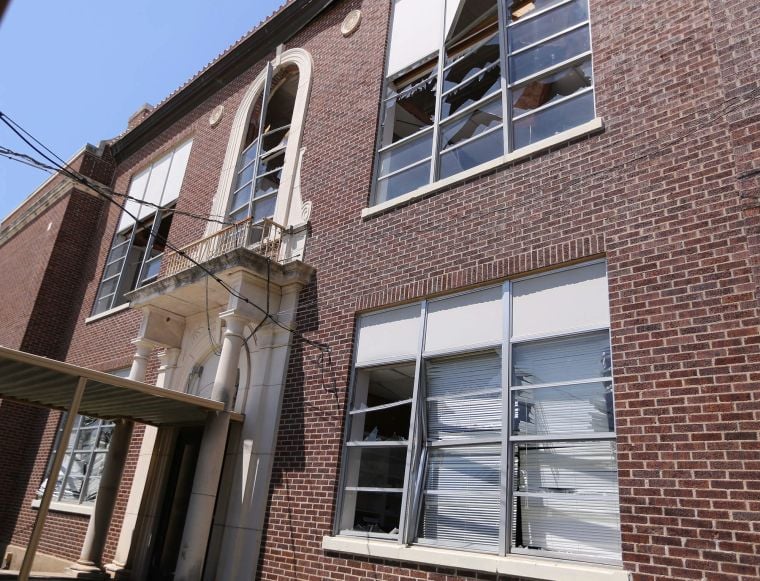 Windows blown out a the West Middle School during the April 17 West Fertilizer Co. explosion.$RETURN$$RETURN$ 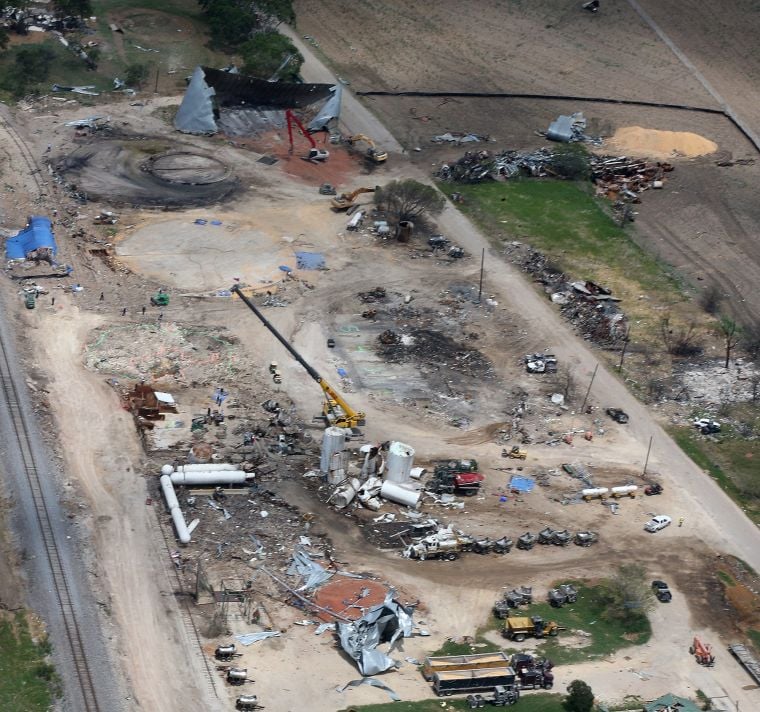 An aerial view of the remains of West Fertilizer Co.$RETURN$$RETURN$

The Federal Emergency Management Agency has denied disaster funding for West that would have helped rebuild schools and repair infrastructure damaged in the deadly April 17 fertilizer plant explosion.

In a June 10 letter addressed to Gov. Rick Perry, FEMA Administrator W. Craig Fugate wrote that the explosion “is not of the severity and magnitude that warrants a major disaster declaration.”

The explosion caused 15 deaths and damaged 352 homes, including 161 that will have to be demolished and rebuilt. The city sustained nearly $18 million in infrastructure damage, and the cost to repair or replace three damaged schools will run almost $120 million.

Though FEMA is denying aid to the city, agency representatives note that millions of dollars have gone directly to residents in the form of grants and low-interest loans.

The governor’s office has up to 30 days from the date of the letter to appeal the decision.

“The day of the West memorial service, President (Barack) Obama stood in front of a grieving community and told them they would not be forgotten,” Perry said in a statement. “He said his administration would stand with them, ready to help. We anticipate the president will hold true to his word and help us work with FEMA to ensure much-needed assistance reaches the community of West.”

“Just last month, I saw the devastation firsthand, met with rescue workers and heard the president himself say that ‘America needs more towns like West, Texas,’ ” Abbott said in a statement.

“But now, once the cameras have stopped rolling, President Obama’s FEMA has denied our state and our neighbors the necessary opportunities to rebuild critical infrastructure in the town, including an entire school.”

West Mayor Tommy Muska said he got a copy of the FEMA letter Tuesday night and called the agency’s Washington, D.C., headquarters Wednesday to make sure he was reading it correctly.

“I am shocked and very disappointed and don’t know what the definition of disaster means to these people,” Muska said. “I think the citizens of West deserve to know what their definition and criteria for disaster would be.

U.S. Rep. Bill Flores, R-Bryan, said he was particularly disappointed with the decision because Obama reiterated  pledges of support for West in conversations with Flores and Perry after the April 25 memorial service honoring the first responders who died in the explosion.

Flores said FEMA representatives did not indicate why the aid was denied in a conference call Tuesday evening. Flores said he will urge fellow Texas Congress members to sign a letter urging the president to reverse the decision.

Texas Sen. Brian Birdwell, R-Granbury, said in a statement he also was “stunned” at the ruling and pledged to work with Perry, Flores and U.S. Sens. John Cornyn and Ted Cruz toward winning an appeal.

“If I were talking to the mayor of West or to the citizens of West, I would tell them, ‘Don’t become disappointed at this point in time. You still have a bunch of people working on this for you,’ and that we’re not going to rest until we get this across the finish line,” Flores said.

West Independent School District estimates that it will cost around $117 million to repair or rebuild three campuses that were severely damaged in the blast.

That also includes reconfiguring its middle school campus with portable buildings to temporarily accommodate West’s seventh- through 12th-grade students, who had to finish the school year at the vacant Connally ISD intermediate school.

The school district has insurance coverage for up to $60 million.

West ISD Superintendent Marty Crawford said while the ruling is disappointing, the district braced for a denial on the first application based on conversations with other school districts that had applied for FEMA disaster aid.

Crawford said superintendents in Kansas and Joplin, Mo., told him their districts initially had been denied aid for tornado recovery efforts but later were awarded funds during the appeals process.

Crawford said the school district cannot afford to fund the construction projects from its own coffers. He added that a bond package also wouldn’t be a feasible option because overall property appraisals are expected to drop by as much as $40 million because of the damage to properties.

The West ISD board of trustees Wednesday night interviewed two construction companies and appointed a construction manager to oversee rebuilding efforts. Crawford said the district is still in negotiations with insurance provider Trident for a settlement to fund the initial projects.

“I’m tending to not focus on the disappointment of today’s letter but saying, there’s been precedent set, and we won’t worry about other funding options until we are just flat-out looked in the eye and told ‘no’ by the decision-makers,” Crawford said.

While the ruling is a blow to West’s infrastructure and school rebuilding efforts, FEMA spokeswoman Carmen Rodriguez said the decision does not affect homeowners’ ability to receive federal aid to repair or rebuild their houses.

The agency already has provided more than $7 million in direct federal disaster assistance grants and low-interest loans to residents, according to a statement from FEMA spokesman Dan Watson.

In addition, FEMA has approved up to 75 percent in matching funds for debris removal and emergency protective measures, said Frank Patterson, emergency management coordinator for Waco and McLennan County.

Patterson said he began to fear that West would be denied the assistance because there had been no word from FEMA after the application for aid was submitted May 30.

“Every day that went by, you honestly kind of lose a little hope,” Patterson said. “Every day, you wonder if you’re going to get it or not, so the question starts to get in your mind.”

Watson did not respond to specific emailed questions on how FEMA reached its decision.

Patterson speculated that West may not have met the financial need threshold to qualify for public-assistance aid from FEMA. For the state of Texas, disaster damages must top $35 million after insurance coverage is applied before a public entity like the city or school district would be eligible for assistance.

“In a tornado, for example, you might have it go through three or four different counties, so meeting that $35 million state threshold is easier because you’re getting those counties’ cumulative damages together,” Patterson said. “In this case, since this was a disaster only specific to this location, then this incident had to meet that threshold for the state.”

Josh Havens, a deputy press secretary for Perry, said  $15 million in disaster relief was included in a supplemental appropriations bill passed by the Legislature last month. West, Bastrop County and counties affected by wildfires would be eligible for the funds.

The bill was sent to Perry for approval June 5, but has not been signed yet.

An areial view of damage done to the West Intermediate School in the April 17 fertilizer plant explosion. FEMA has denied West additional aid that would have helped the district repair or rebuild three damaged campuses.$RETURN$$RETURN$

Windows blown out a the West Middle School during the April 17 West Fertilizer Co. explosion.$RETURN$$RETURN$

An aerial view of the remains of West Fertilizer Co.$RETURN$$RETURN$