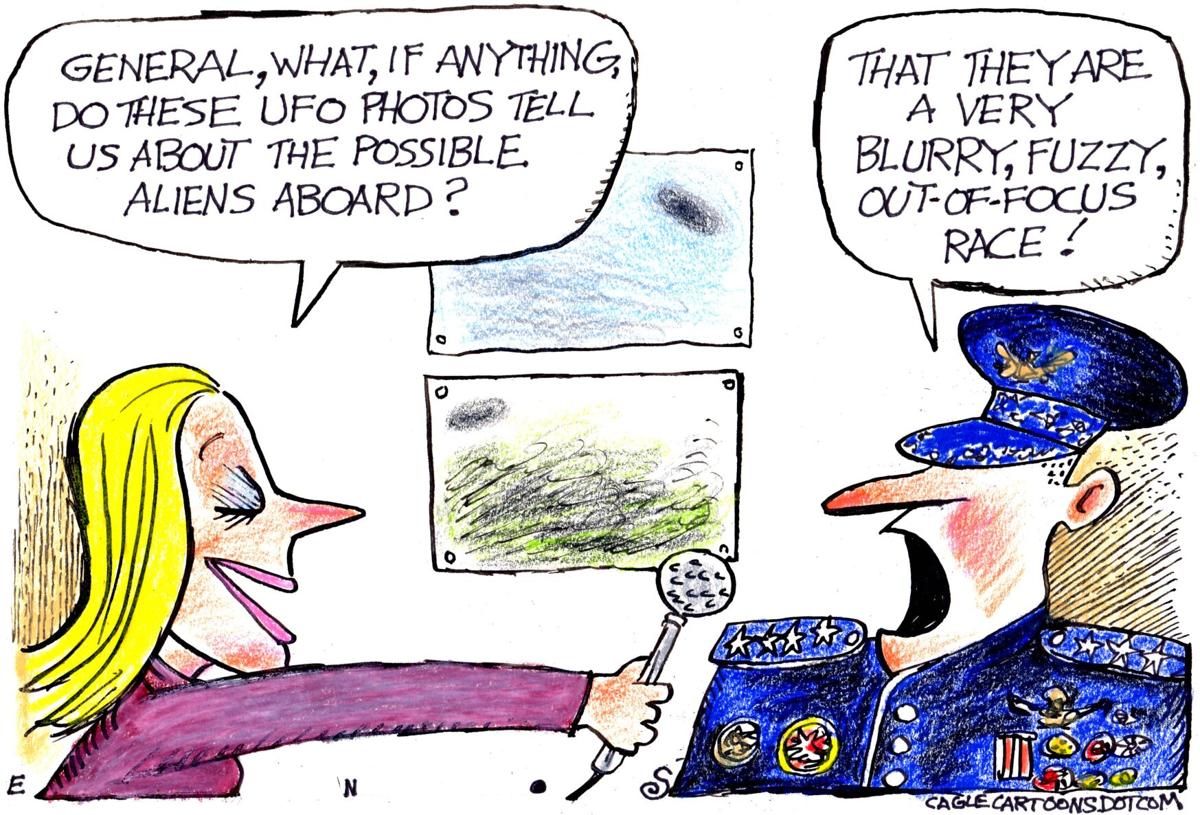 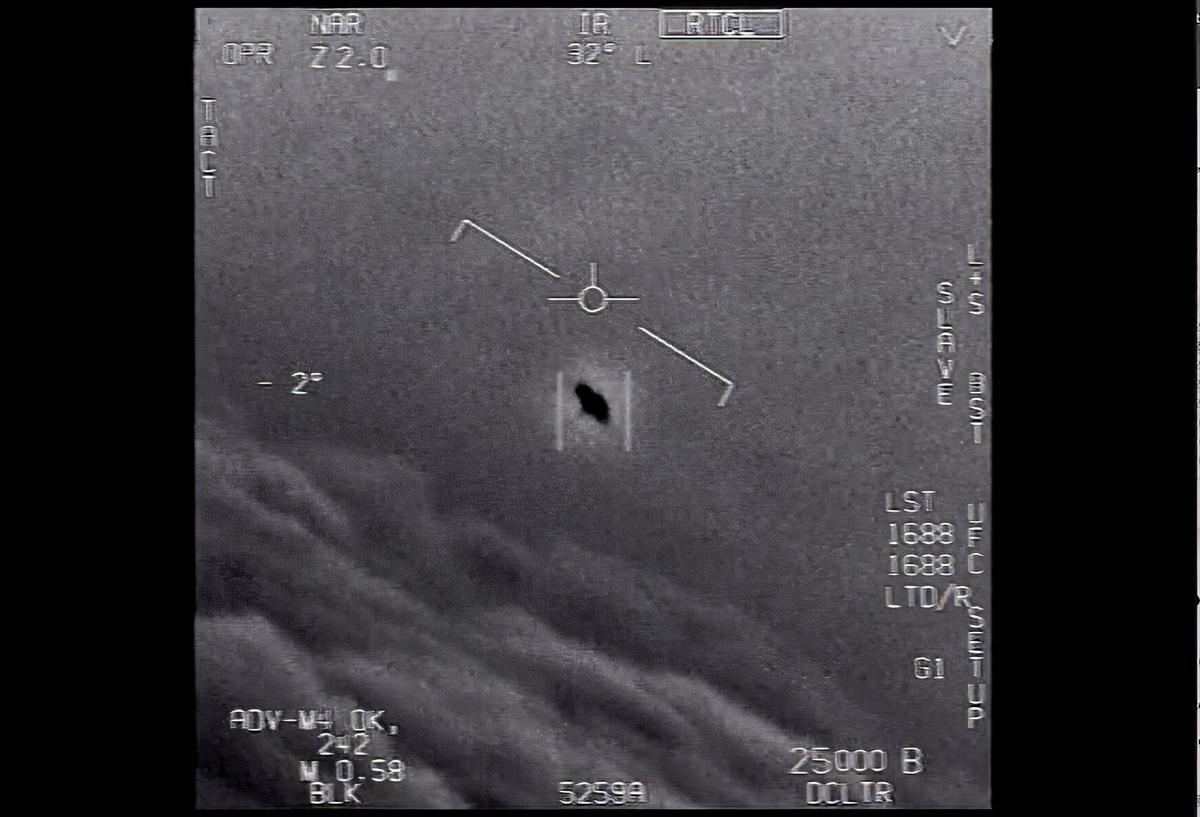 In this image from a 2015 video, labeled Gimbal, an unexplained object is seen at center as it is tracked as it soars high along the clouds, traveling against the wind.

Texas A&M University astronomer Nick Suntzeff has been involved with space research for 30 years and spent 20 years in Chile, where he helped co-discover dark matter. Below, he offers his thoughts about UFOs and whether or not we are alone in the universe.

Q: What can we expect from the government’s official UFO report?

A: I have no idea what the report will say, but I doubt they have any evidence where a UAP (Unidentified Aerial Phenomenon, previously called a UFO) is clearly resolved. For starters, have you ever noticed that UAP images and videos are usually out of focus?

In the recent videos that are now getting a lot of attention called FLIR1, Gimbal, Triangle and GoFast, for instance, let’s consider the triangular UFO. In the video you can also see other objects that are triangles. Are these sister UFOs? No. What this means is that the camera was out of focus and the camera pupil (shutter) was triangular. One person has measured the positions of the faint triangles (and one bright one) and shown that they are at the positions of the stars near the constellation Taurus and the planet Jupiter. Also, this UFO blinks in the same way a commercial aircraft does. It was taken off the coast of Los Angeles where there is a lot of air traffic. It is an out-of-focus video taken with an infrared camera.

This is one example of an explanation that fits the data. Now, why did the Navy not provide this explanation? They should have asked an astronomer before releasing the video because they could have quickly shown that this an out-of-focus image.

Q: So does that mean the UFOs are not real?

A: Well, you can often debunk one story, but you will then get another story and someone will say, “Okay, but explain this one.”

In one video, a pilot said the UFO resembled a large Tic Tac mint and that it was defying the laws of physics over the ocean and moving fast. The problem here is that we don’t know how far away it was. If it was high above the ocean, then the apparent motion is likely due to the airplane and not the object.

This is called parallax. You can often find answers like this, and so on.

So I am not optimistic that we will be shown extraordinary evidence where there is no natural explanation for what is seen.

Q: So you are saying that you can rule out most UFO sightings as something else and not a UFO?

A: There are often simple, but boring answers. For example, the most common UFO is the planet Venus. Once I got a phone call from an excited person who was telling me they can see a UFO right now. It is moving back and forth, and sometimes it suddenly comes closer and then moves away. I asked them if they could still see it. Yes! So I drove down to the parking lot and there was a group of people bunched together pointing up to the sky. I went over there and asked them to show me where it is. I look up there, and it is Venus. I tell then it is Venus. I look at it and it is not moving. It was twinkling a bit but otherwise, nothing unusual. As we looked, they admitted it was not moving, but I was assured that it was before I got there.

Q: Many people are convinced that these UFOs are visitors from another planet, that they have been monitoring the Earth for decades and they are real. If true, it would be perhaps the biggest story of all time. Is it possible?

A: I can’t rule out we have visitors from other planets. But we need clear evidence. We need a clear photo, for instance. So far, we do not have such evidence.

Note that many reports say that the UFO object was a certain size and moving at a certain speed. Now, if you don’t know what the object is, you can’t know how far away it is, or how big it is. Anyone who says they know the size (unless it landed and left a mark) is, well, not understanding simple optics. So once again, we need clearer proof. I have seen lots of weird things in the sky — very weird things — but I can always explain them.

As for intelligent life, in a way it is a strange question. As the great physicist Enrico Fermi was claimed to have said, “Well, where are they?” That is, if there is intelligent life, why don’t we see it with our telescopes, or see evidence here on Earth of visitations? Astronomers are always looking for life elsewhere in the universe.

Q: Any shred of truth to the long-held rumors that the government has been hiding pieces of crashed UFOs and perhaps even bodies?

A: If they do, this is the best kept secret ever. Our government is not great at keeping secrets, and this one would be a doozy. No, I don’t believe there is any physical evidence. I don’t think intelligent civilizations could travel the thousands of light years to Earth and then crash their spacecraft. If they can travel that distance, I seriously doubt they would be this careless.

Q: It seems like the scientific community has always been more than a little reluctant to talk about UFOs. Why is that?

A: We are not reluctant to talk about it. There are a number of astronomers actively looking for signs of intelligent life out there. It is a real field in astronomy. The problem is that one cannot get government funding to study UFOs. So those astronomers look to the private sector to do the studies. A very close friend of mine, now retired, built his own observatory and is searching for intelligent signals. He got this funded by some rich person in Silicon Valley. If there were sources of steady funding, I am sure a lot of young astronomers would take a job searching for intelligent life.

Q: Any other thoughts you may have about UFOs?

A: This is thought experiment. We are not too far — maybe 100 years or so — from building mini-satellites, accelerating them up to 10% the speed of light using lasers, and sending them off to nearby stars. We could make billions of them — after all, we have made billions of cell phones so far. With laser acceleration and lightweight satellites (10 grams or so), we could launch these to billions of stars. The satellite could have a radio transmitter beeping the first 10 Fibonacci numbers (a mathematical sequence) showing it must be artificial.

The only fact we are certain of is that so far — and we are looking hard — it is silent out there.

Nick Suntzeff is director of the astronomy program at Texas A&M University. He co-founded the High-z Supernova Team, which won the Nobel Prize in Physics for its discovery of dark energy. Suntzeff has won the prestigious Breakthrough Prize in Fundamental Physics and the Gruber Prize in Cosmology. This Q&A was conducted by Keith Randall of the Texas A&M marketing and communications department, a longtime Wacoan who was formerly public relations director at Baylor University and a Tribune-Herald reporter.

In the fall of 1984, Janet, our two small children and I boarded a plane for Haiti to work and train with a Christian hunger organization for …

Mary Darden: Don't be fooled into thinking your school will be there forever

Attending Fourth on the Brazos, the annual Independence Day celebration in Waco, this year in 75-degree weather was delightful. Thousands of C…

Yael Ossowski: Dental insurance is the next industry that badly needs reform

In the last decade, most debate and discussion on reforms related to healthcare have focused on Americans’ general health insurance plans and …

Jonah Goldberg: Anti-vax hysteria is anything but pro-life

In a recent flight from Texas to North Carolina, a woman came so unglued that she tried to open the plane’s door. The flight crew had to bind …

Chris Talgo: Without FDA approval, vaccines should not be mandatory

Throughout the country, schools (especially colleges and universities) are mandating that students receive COVID-19 vaccinations before they r…

Llewellyn King: 'Shove this job' Is the theme of the Great Labor Reshuffle

Millions of Americans appear to be echoing the words of the Johnny Paycheck song “Take This Job and Shove It.” This is a sentiment that is cha…

Leonard Pitts: They fear nothing quite so much as the loss of whiteness and its privileges

In this image from a 2015 video, labeled Gimbal, an unexplained object is seen at center as it is tracked as it soars high along the clouds, traveling against the wind.