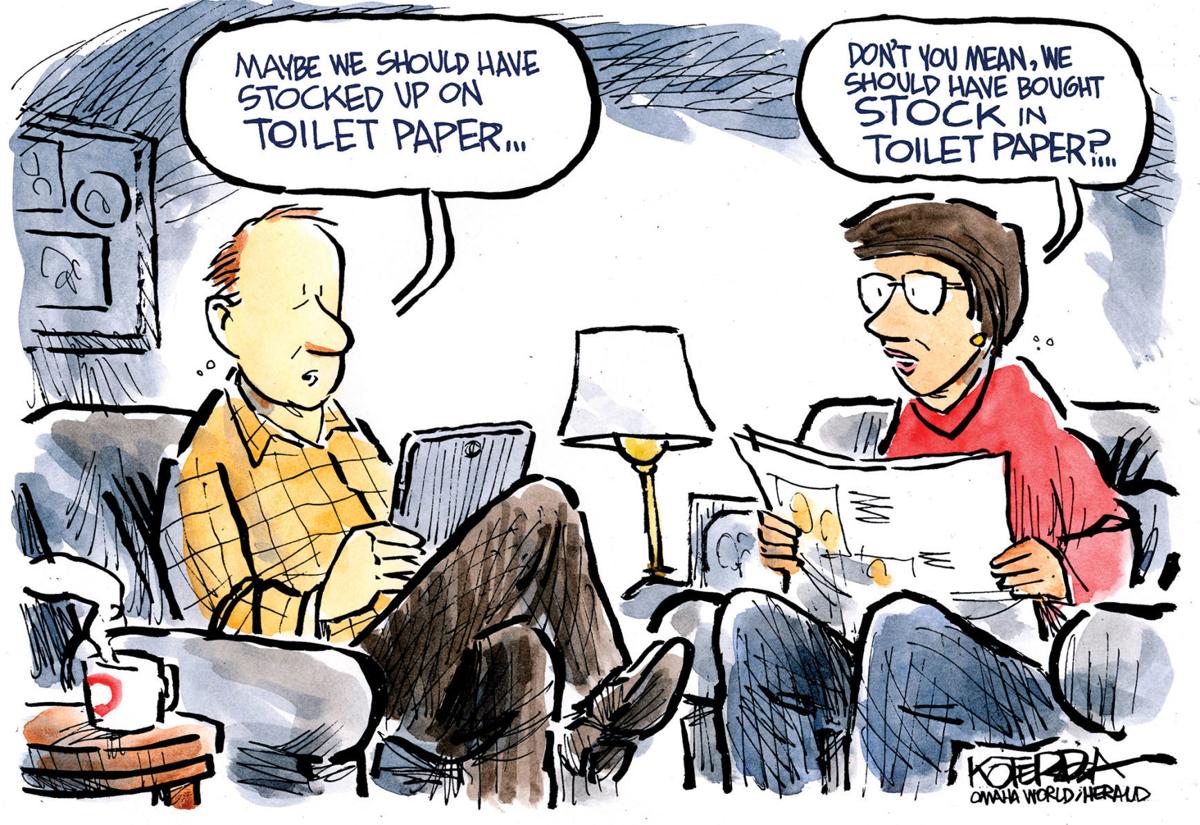 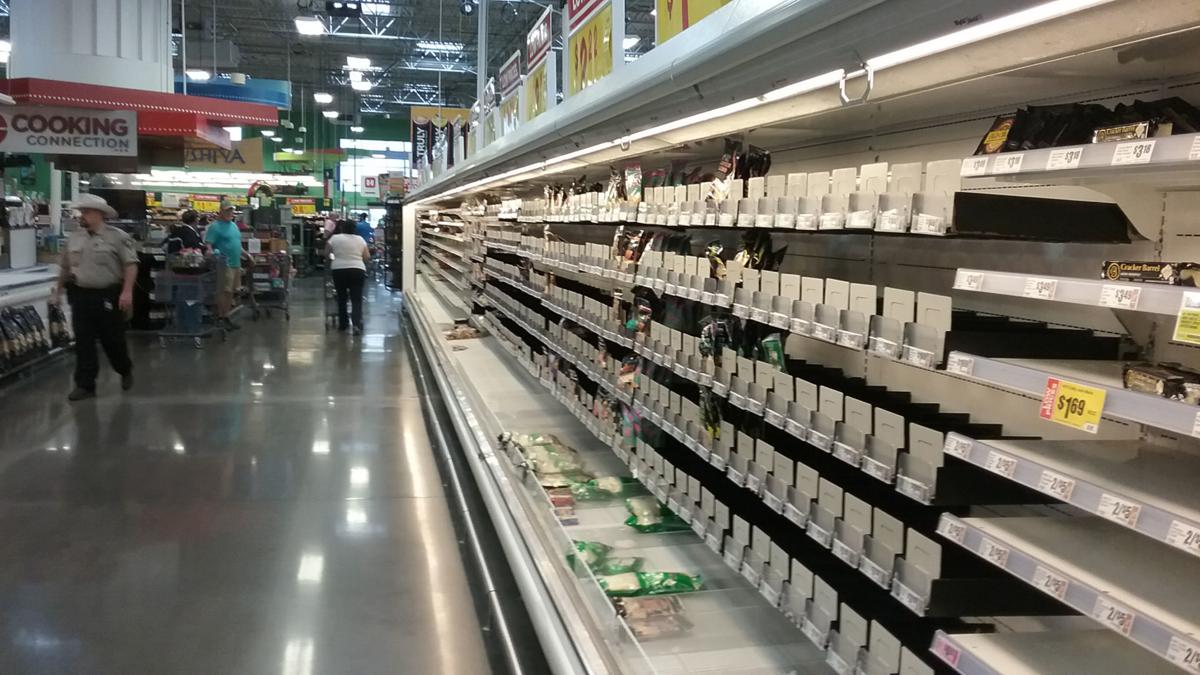 A law enforcement officer patrols a local H-E-B while some customers marvel at an aisle picked nearly clean of cheese.

A law enforcement officer patrols a local H-E-B while some customers marvel at an aisle picked nearly clean of cheese.

There has been a swift backlash against the “Hoarding Brothers,” two brothers from Tennessee who bought nearly 18,000 bottles of hand sanitizer in an effort to profit off fears relating to the coronavirus. After publicly whining that Amazon and Facebook Marketplace prevented them from selling their stock, brothers Matt and Noah Colvin have been harshly shamed on social media, and the Tennessee attorney general accused them of “price-gouging” during a national emergency before confiscating and redistributing their stash.

Yet dramatic photos of empty shelves in grocery and retail stores, and signs shaming people for how much toilet paper they’ve bought, indicate that the Hoarding Brothers may only be an exaggerated version of general American behavior. Hoarding is so commonplace that President Trump has addressed the issue. “You don’t need to buy so much,” counseled the president. “Take it easy. Relax.” Vice President Pence also urged Americans to buy only the groceries they need for the week ahead in their efforts to manage the health and social effects of the novel coronavirus.

These pleas reveal how in times of national emergency, few domestic actors have been the object of more scorn than hoarders and black-market traders, and this has been by government design. During World War II, when rationing of essential supplies took effect, wartime propaganda inserted morality into the marketplace to ensure effectiveness of the program. It worked. Hoarders took center stage as dastardly villains — something the Hoarding Brothers, called everything from “greedy” to unprintable profanities, have felt all too well.

During World War II, the federal government’s Office of Price Administration deemed gas, rubber, sugar, meat, coffee, butter, canned goods and other items as essential to the war effort. Saying “do with less so they’ll [U.S. soldiers and American allies] have enough,” the OPA claimed that rationing would allow consumers to have “a fair share at a fair price.” Of course, this system worked only if consumers complied; those who disobeyed were subject to hefty fines, even jail time.

However, enforcement was difficult as the system relied on volunteer ration board officials and the honesty of both merchants and consumers. And so the U.S. government exerted intense social pressure to show hoarders the error of their ways.

President Franklin D. Roosevelt directed the Office of War Information, the federal government’s main propaganda agency, to explain rationing to the public in a “positive, thought-provoking but nonthreatening manner.” Indeed, the OWI’s educational campaigns often appealed to citizenship and patriotism in its efforts to explain why hoarding or trading on the black market contributed to inflation, caused shortages and undermined the war effort. “A blow against the black market is a blow toward victory,” proclaimed one poster as Uncle Sam rolled up his sleeves in the background.

But the OWI also used guilt and shaming techniques against the selfish hoarder and greedy black-market trader. Government posters often characterized the hoarder as an old, pinch-faced biddy literally taking food out of the hands of an attractive young woman. Films, such as the Department of Agriculture’s “It’s Up to You,” portrayed a shopper being browbeaten by her conscience after soliciting a “dishonest butcher” for a black-market steak. Some of these scenarios took place with images of Hitler, the ultimate beneficiary of ration violations, lurking in the background.

Hollywood studios followed suit. “Letter from Bataan,” a “victory short” produced by Paramount Pictures, dramatized the results of hoarding through a letter from a soldier named Johnny to his family. The film begins with Johnny’s neighbor bragging that the authorities “didn’t catch me” when she managed to amass 28 pounds of canned goods and 200 pounds of sugar.

But the elderly woman slinks off in shame after Johnny describes the death of his buddy, who perished when Johnny’s night blindness, a result of “a lack of fresh vegetables,” prevented him from accurately shooting down Japanese planes. In the feature “Since You Went Away,” Agnes Moorehead played an acerbic socialite who hoarded sugar and wasted goods as she antagonized the film’s resilient protagonist, Claudette Colbert.

Even Popeye the Sailor got in the action in an animated short titled “Ration fer the Duration.” In a dream sequence reminiscent of Jack and the Beanstalk, Popeye fought the giant who not only held captive the golden goose but was also stockpiling sugar, rubber tires, silk stockings, cola, gasoline and empty toothpaste tubes. Popeye exclaimed “Uncle Sam could use all that stuff” before downing some spinach (ironically, also rationed) and liberating the items from the giant’s pantry.

Such propaganda did not always work. When the government announced new rations, consumers often invaded the stores and caused new shortages. Black market trading persisted. Between 1941 and 1947, the OPA issued 259,966 citations, and the agency estimated that in 1943 alone consumers bought $1 billion worth of goods illegally.

Complying with rationing, resisting hoarding and avoiding the black market complemented many other activities undertaken by Americans, including planting victory gardens, participating in salvage campaigns and donating their services in soldier canteens and veterans hospitals. This volunteerism gave Americans pride in knowing that individual actions contributed to the public good, and show that even while the temptation to hoard persists during our current crisis, social and political pressure play an important role in keeping such impulses in check.

Emilie Raymond is an associate professor of history at Virginia Commonwealth University and author of “Stars for Freedom: Hollywood, Black Celebrities and the Civil Rights Movement,” which will be released in paperback in March.

What Others Are Reading

Welcome to the discussion.

Keep it Clean. Please avoid obscene, vulgar, lewd, racist or sexually-oriented language.
PLEASE TURN OFF YOUR CAPS LOCK.
Don't Threaten. Threats of harming another person will not be tolerated.
Be Truthful. Don't knowingly lie about anyone or anything.
Be Nice. No racism, sexism or any sort of -ism that is degrading to another person.
Be Proactive. Use the 'Report' link on each comment to let us know of abusive posts.
Share with Us. We'd love to hear eyewitness accounts, the history behind an article.