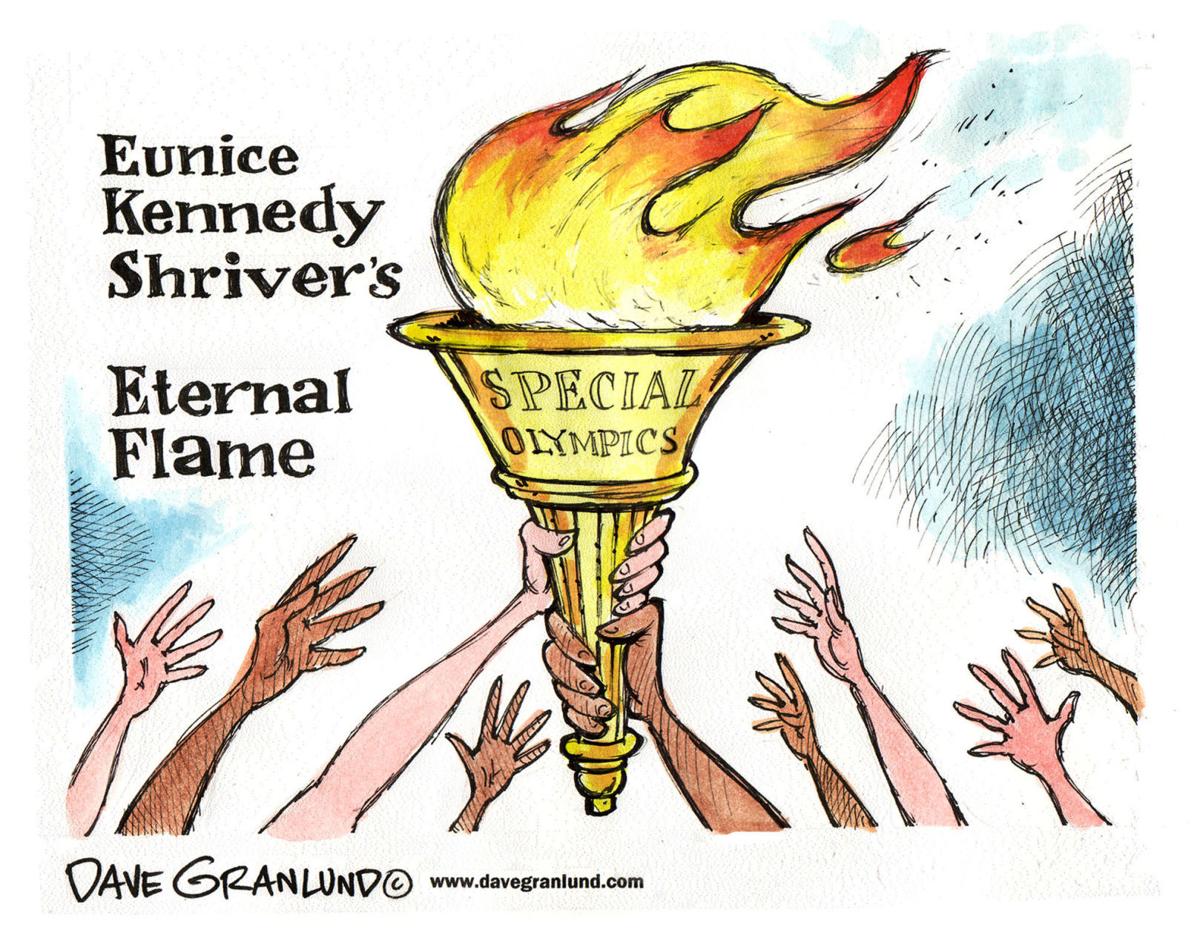 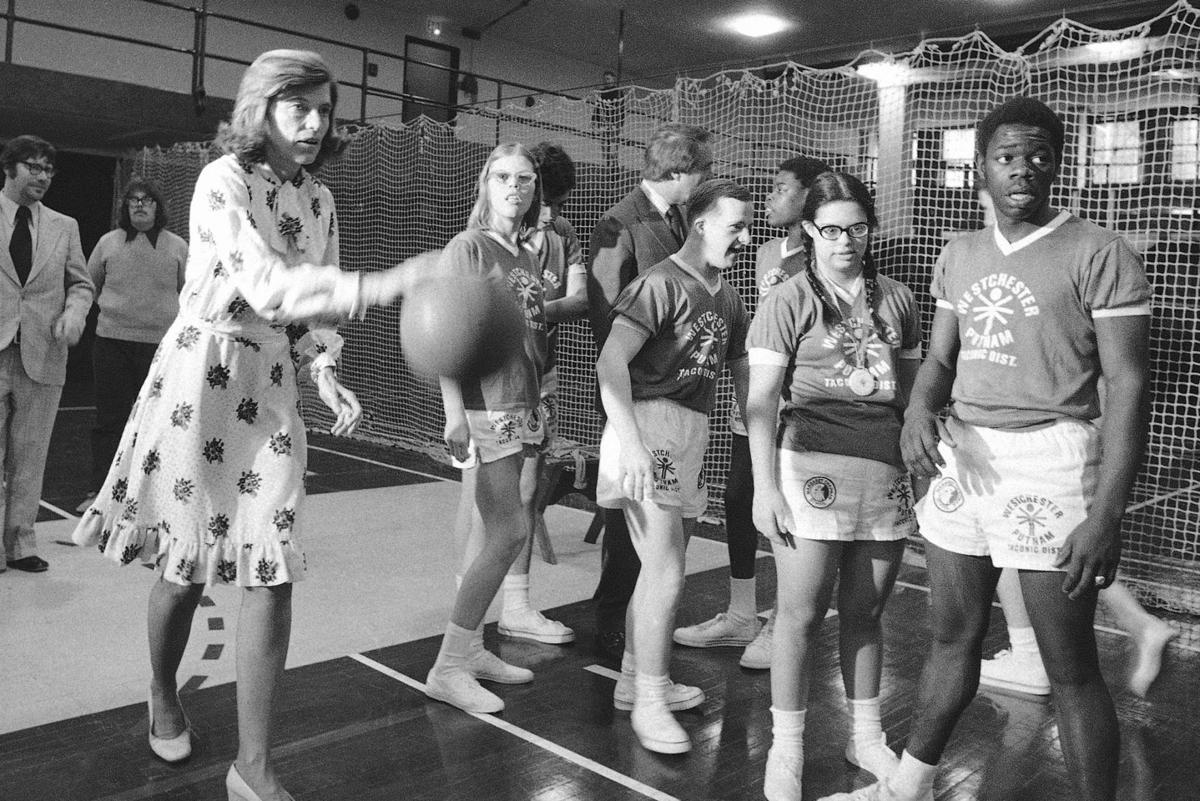 Eunice Kennedy Shriver (left) plays basketball with developmentally disabled children from the Margaret Chapman School in Hawthorne, New York, in 1975. Shriver founded the Special Olympics and championed the rights of the mentally disabled.

One of history’s most transformative human rights movements began on a steamy July afternoon 50 years ago in front of fewer than 100 spectators. Eunice Kennedy Shriver, speaking six weeks after her brother Robert was killed, stepped to the microphone at Soldier Field in Chicago and opened the first Special Olympics Games. Shriver, then 47, her voice a gravelly mix of upper-crust Hyannis Port and dockside stevedore, boldly stated that 1 million of the world’s intellectually challenged would someday compete in Special Olympics.

Special Olympics volunteers are sometimes at the forefront of uncovering atrocities. On a trip to Tanzania’s notoriously squalid Nyarugusu refugee camp last year, Nils Kastberg, a Special Olympics board member, came upon a 15-year-old intellectually challenged boy, Malakai Nibikora, who was kept in chains by his mother. “It was mostly for his protection,” Kastberg said recently, “but we were able to convince her that this was not a good thing.” Kastberg and local Special Olympics representatives negotiated with the boy’s mother and religious leaders to release him for soccer training. “And now he will be in Abu Dhabi as a member of Tanzania’s team at the 2019 Special Olympics World Games,” Kastberg said.

Special Olympics’ medical branch runs the largest worldwide health organization for people with intellectual disabilities, and in thousands of schools throughout the world “unified sports” teams pair intellectually challenged students with mainstream students, providing an education for both.

Indeed, over the past half-century Special Olympics has been that rare Washington-based institution that actually seems to be working. U.S. funding, even if zeroed out in the executive office (which happened in both of President Trump’s first two budgets), has been reliably restored in Congress, and representatives from both sides of the aisle fall all over themselves to be associated with the organization, as do A-list entertainers and athletes.

The organization’s success in changing the lives of the mentally challenged clouds our memory of what life was like for that population before Shriver, who died in 2009, started making noise. There were few educational programs in schools for kids with intellectual disabilities, and thousands of kids and adults were locked away in institutions. Countless others were kept behind closed doors because parents were embarrassed, worried for their safety, or some combination of the two. Society at large wasn’t kind, either. “You should be ashamed of yourself putting these kinds of kids on display,” a representative from Tribune Charities indignantly told a volunteer from the Chicago Parks Department when she requested sponsorship money for the Soldier Field event.

That volunteer was Anne Burke, who is today an Illinois Supreme Court justice. Burke (then McGlone) and others in the department had the idea of holding a track meet for the intellectually challenged kids who were already a part of their summer program. Burke visited Shriver in Washington to ask for help and — voilà! — the track meet was in short order “Kennedyized” with a $25,000 donation from the Joseph P. Kennedy Foundation and the energy and tenacity of Shriver.

“It’s okay if we’ve been a little forgotten,” says Burke, who continues to be active in Special Olympics. “Nobody except Eunice could’ve turned this into what it ultimately became.”

Much of Shriver’s motivation came from the fate of older sister Rosemary, who spent her final 63 years in an institution after a disastrous prefrontal lobotomy left her incapacitated at age 23. “My mother was tough and strong-willed, but she also had this vulnerable and empathic side,” says Tim Shriver, the middle of five children of Eunice and Sargent Shriver and now the chairman of Special Olympics. “After watching the struggles of her sister, visiting institutions and seeing this enormous amount of human suffering, she just couldn’t take it anymore.”

The Shrivers opened their home in Rockville, Maryland, to intellectually challenged kids as a kind of informal summer camp, and, after brother Jack landed in the Oval Office, she never stopped lobbying him about funding for kids with special needs. Then came Chicago in 1968, where the fire was really lit.

Special Olympics will recognize its golden anniversary with a five-day program at Soldier Field this week. Several of the volunteers who participated in 1968 will be there, including Burke. “One of the things I remember is Mrs. Shriver sending someone to Sears to get her a swimsuit,” Burke says, “because she wanted to dive in with the kids.” It was that everybody-in-the-pool spirit that moved Special Olympics, and it was started by a woman of power who spoke for the powerless, something that so often seems missing today.

Jack McCallum is an author and longtime writer for Sports Illustrated.

As an educator, I thought that keeping 850 middle school students calm as they huddled in hallways waiting for tornado sirens to stop was the …

Patricia Bernstein: A century later and still no anti-lynching legislation!

It’s been almost 100 years since the U.S. House of Representatives passed the first bill that would have made lynching a federal crime in 1922…

Eunice Kennedy Shriver (left) plays basketball with developmentally disabled children from the Margaret Chapman School in Hawthorne, New York, in 1975. Shriver founded the Special Olympics and championed the rights of the mentally disabled.