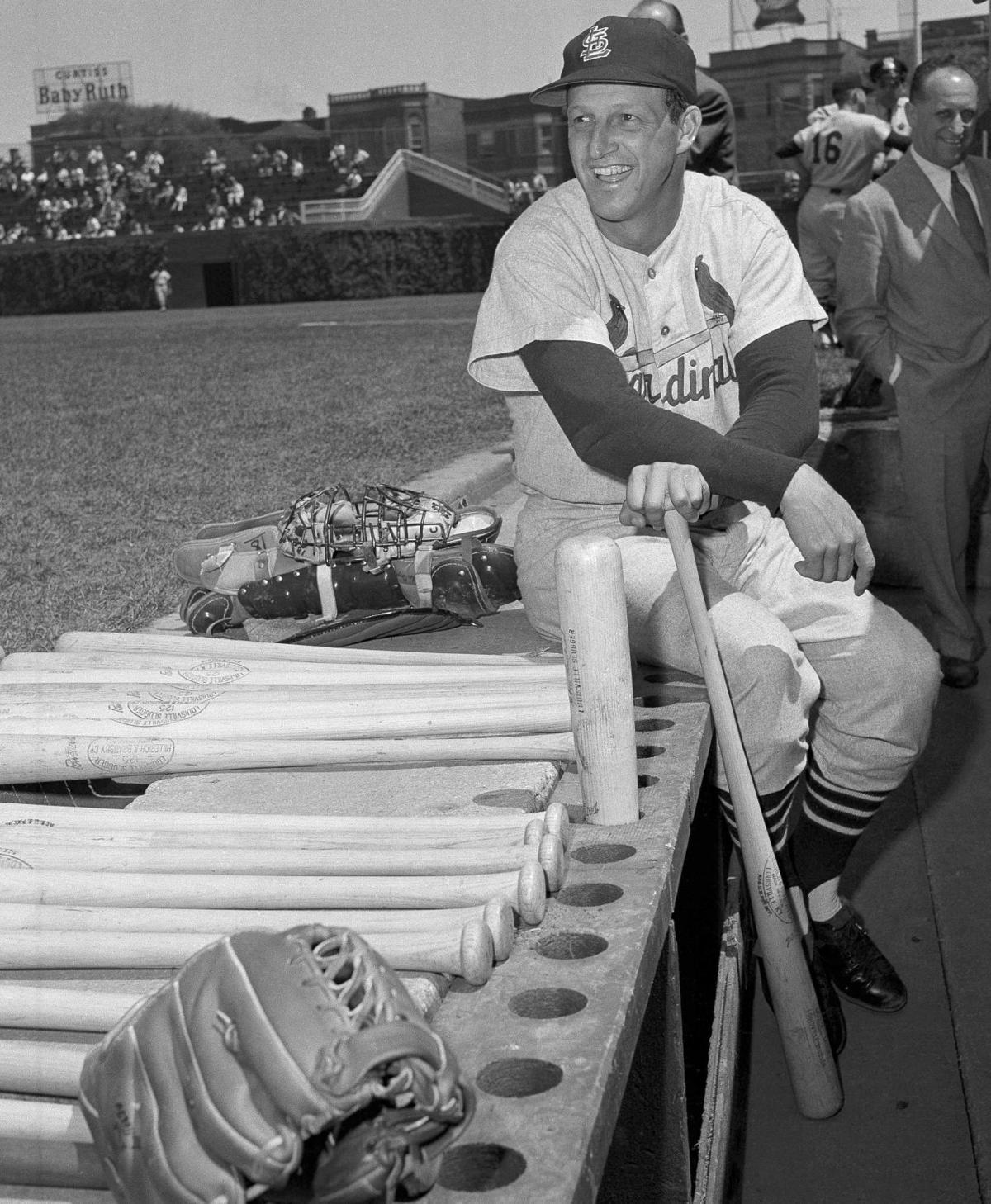 Stan Musial made 24 All-Star appearances, tied for the most in baseball history with Hank Aaron and Willie Mays, but his reputation as a graceful, approachable man matched his ability on the field. 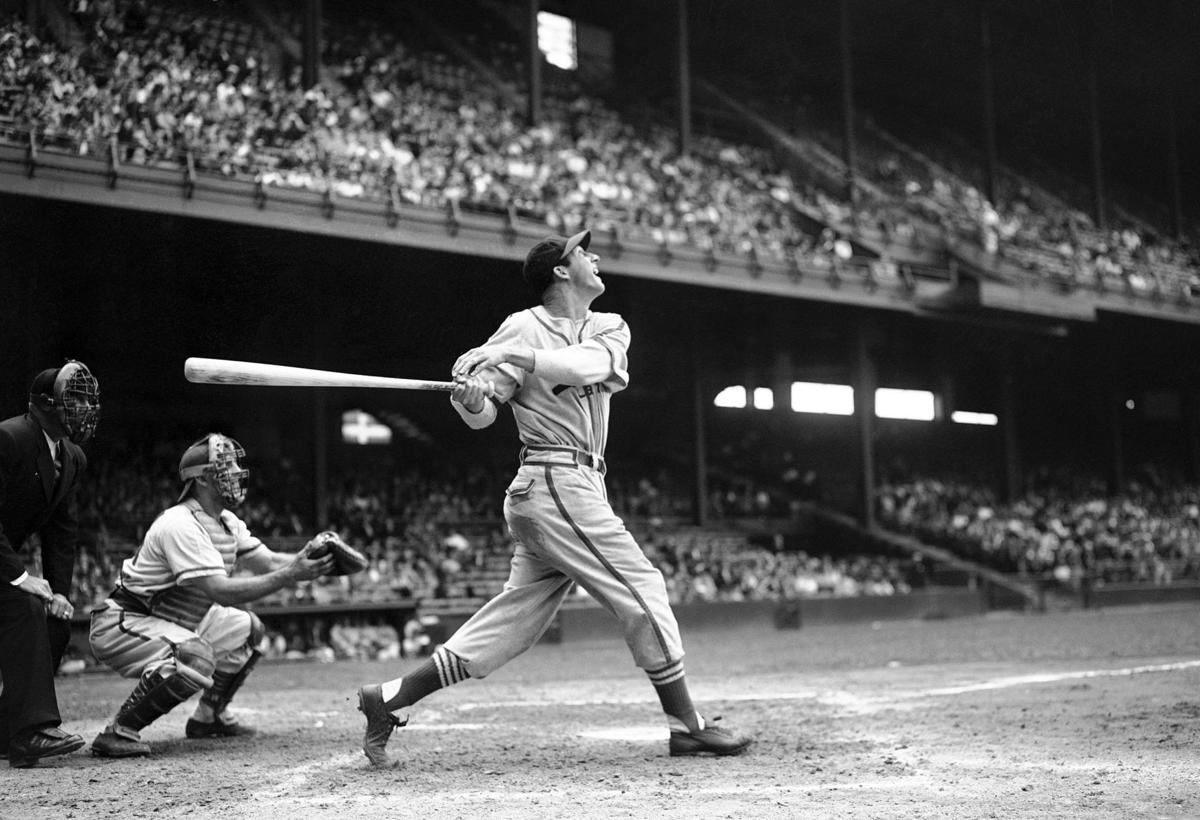 Stan “the Man” Musial is viewed as one of the greatest and most consistent hitters in baseball history, with a .331 career batting average and a total of 3,630 hits. 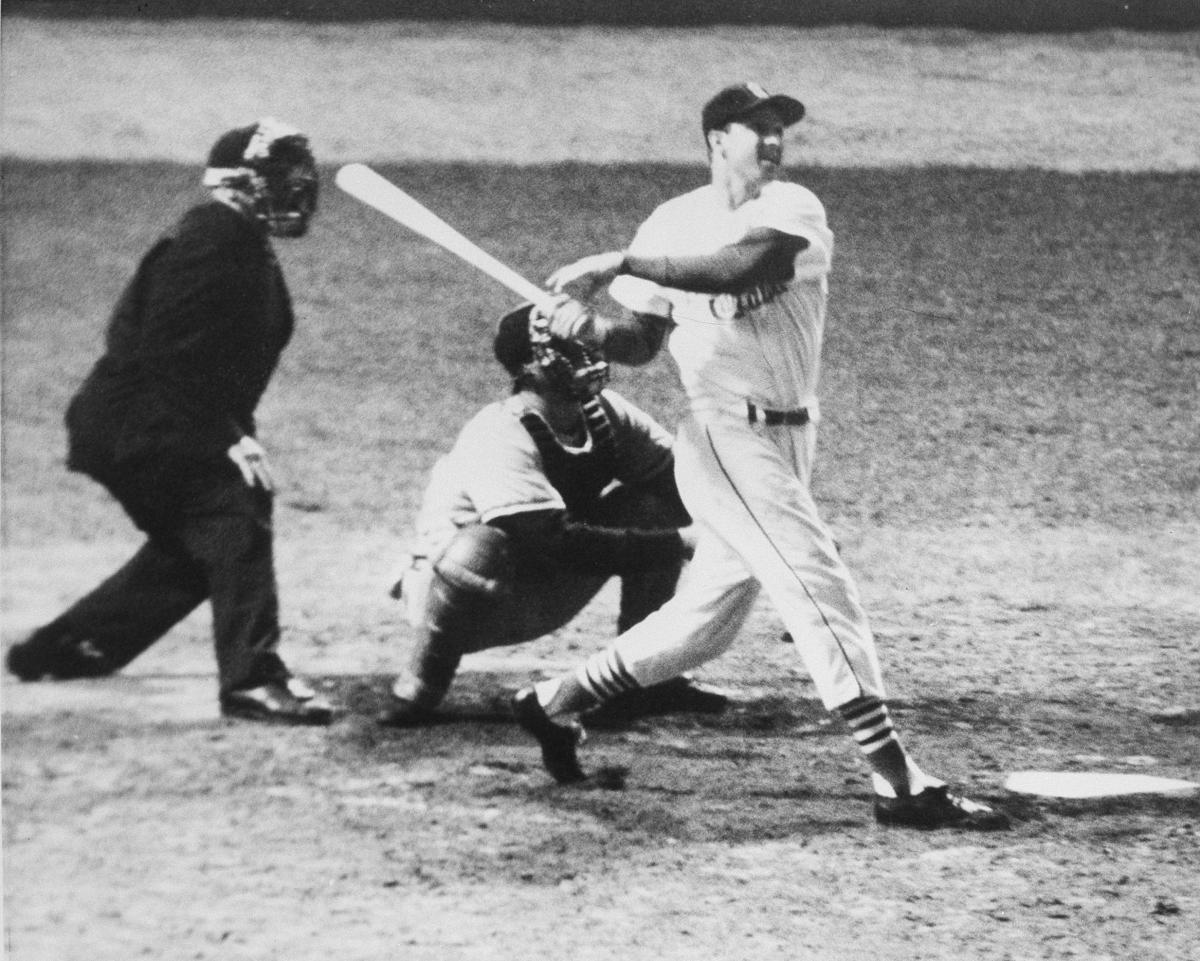 Stan Musial of the St. Louis Cardinals looks up to follow the ball after connecting for a double against the Milwaukee Braves in Milwaukee, Wis., June 27, 1961. The hit marked the 10,000th time at bat for “Stan the Man” in the major leagues, and just missed going out of the park.

By JOHN WOOD Special to the Tribune-Herald

Stanley Frank Musial was an outfielder/infielder for the St. Louis Cardinals. He was elected to the Hall of Fame in 1969.

Stan’s father, Lukasz Musial, of Polish descent, was born in what was then Austria-Hungary. His mother, Mary Lancos, was of Czech descent and born in New York City. They settled in Donora, Penn., where Lukasz worked in the steel mill. Stan was close to his mother but had a more strained relationship with his father, who apparently struggled with alcohol.

In school Stan was an average student at best and always the best athlete in every school he attended. He was a bit shy and developed a stammer he carried into adulthood.

As a teen Stan worked at a grocery store owned by Sam Labash, a former baseball player. It seems that Sam had found just the kind of guy for his daughter Lillian. Stan claimed that he and Lillian were secretly married on Stan’s birthday, Nov. 21, 1939, but a church wedding was held on May 25, 1940, in Daytona Beach, Fla., where Stan had gone for spring training.

Interestingly Stan came by his famous moniker not in St. Louis but in Brooklyn. Dodger fans took to Stan and every time he came to the plate they would chant, “Here comes the man!” After a sportswriter wrote about it, it became his nickname for life. It was not uncommon for Dodger fans to give him a standing ovation. Dodger fans had earlier adopted Dixie Walker (“The People’s Choice”) and Gil Hodges (never booed) as their favorite Dodgers; now they adopted Stan as their favorite opponent. Interesting fans, those Dodger rooters.

One will search in vain to find a more beloved figure in St. Louis than Musial. Stan endeared himself to everyone who met him. He was accessible to any and all. He answered phone calls from fans and his house seemed to always have kids hanging around it. Until his health failed him in his 90s, he would attend Cardinal games, linger at his statue there and entertain fans with his harmonica playing.

Even opposing players had nothing but praise for the affable Musial. Robin Roberts, who pitched against Musial many times, said that Stan always seemed to be in a good mood and went out of his way to compliment Roberts when he made a good play. Roberts remembers an instance when a big fight broke out between the Cardinals and the Phillies. Musial grabbed his arm and said, “Robin, we’re making too much money to get hurt in something like this.” Roberts quickly agreed.

Boston Red Sox pitcher Bill Monbouquette, following a disastrous outing in the 1960 All-Star game, expressed great admiration for Musial when Stan insisted that Monbouquette, sitting in the hotel lobby brooding after the game, accompany a group of players to dinner. Stan even picked up the tab for everybody. One could cite many similar instances of Musial’s spontaneous generosity. One time roommate Hank Sauer observed that “If you couldn’t get along with Musial, you couldn’t get along with anybody. ... He was a superstar and a super person.”

Stan’s reaction to Jackie Robinson’s arrival in the major leagues reveals elements of his character. Musial, following his life-long discomfort with conflict, stayed above the fray, leading Jackie to say that Musial was a nice guy, but when it came to do what Jackie had to do Musial neither hurt nor helped him. Jackie wished that Stan had not been so passive. On the other hand Willie Mays has high praise for Musial not only as a ballplayer, but because Musial insisted on joining a card game with Black players while on an airplane headed to an All-Star game. Mays added, “That told me how classy he was, and I never forgot that.”

The other racial issue connected with Musial was the matter of Curt Flood’s challenge of the reserve clause. Flood viewed Stan as a great guy but “unfathomably naïve,” who, because he was an authentic superstar he lived remote from the difficulties encountered by lesser athletes. As general manager of the Cardinals after his playing days, Musial understandably embraced management’s point of view related to conflicts with players. Flood viewed Musial as genuinely believing that the current arrangement was best for everybody connected with baseball. “(Musial) saw the world entirely in terms of his own good fortune.”

But a revealing incident which shows Musial standing up for minorities occurred in a cab ride with a unnamed teammate. The player noticed a Jewish name on the cabbie’s placard and started speaking in a crude version of a Jewish accent. Stan told him to cease and desist. When they arrived at the ballpark the teammate tried to pay for the ride but Musial insisted on paying, and then warned the teammate to never get in a cab with him.

Whereas most ballplayers then (and now) steer clear of politics, Musial was an active and life-long Democrat. He campaigned on behalf of John Kennedy and later visited with him often in the Oval Office. Stan told his close friend, author James Michener, that he supported Kennedy because of JFK’s talk about a more just society. “All that I have I got because older men helped me. That why I’m for Kennedy.”

In retirement Musial stayed busy on many fronts. He was a regular greeter at his popular restaurant, co-owned with Biggie Garagnani (“Stan’s and Biggie’s”). He was often in the Cardinals’ press box. He and Lil enjoyed traveling.

An unfortunate chapter in Stan’s life centered around his relationship with Joe Garagiola. The two met in 1941 and became very close friends and eventually became business partners in 1958, co-owning a bowling alley. So when a news headline in 1986 read that Joe had filed a suit against Musial and his sons, the city of St. Louis was stunned.

The suit was eventually settled out of court with both sides pledging confidentiality. The rift between Stan and Joe was permanent. It is telling that the only Hall of Fame induction ceremony that Musial didn’t attend was the year Garagiola was inducted in the broadcaster’s wing of the Hall. Biographer George Vecsey concludes that this “ruined friendship hung over Musial, exposed a melancholy side, a trace of vindictiveness. Or maybe it was old age coming on.” A person close to Musial noted that Stan wasn’t a lot of fun for a year or so after the split.

A great honor was bestowed on Musial when he received the Presidential Metal of Freedom in 2011, an award given previously to both Joe DiMaggio and Ted Williams. President Obama reminded the guests that there was so much more to the man than his remarkable playing career. “Stan remains to this day, an icon, untarnished, a beloved pillar of the community; a gentleman you’d want your kids to emulate,” Obama said.

Surgery for prostate cancer slowed down Musial for a year or so, but he was back doing his thing afterwards. A much more serious problem began to develop in his mid-80s when he was diagnosed with Alzheimer’s disease. The family pitched in to help keep him active as possible, but the slow descent was inevitable.

Musial died in his home at age 92. He had earlier requested that high profile announcer Bob Costas speak at his funeral and the family honored his wishes. Hundreds filled the Cathedral Basilica in St. Louis, including Hall of Famers Bob Gibson, Lou Brock, Ozzie Smith, Bruce Sutter, Joe Torre, and 90-year-old former roommate Red Schoendienst while thousands stood outside in the January cold to honor their beloved hero. The two-hour Mass was highlighted by Costas’ emotional and moving eulogy where Costas said that Musial’s achievement was “more than two decades of sustained excellence as a baseball player and more than nine decades as a thoroughly decent human being.”

He was buried in Bellerive Heritage Gardens in the St. Louis suburb of Creve Coeur next to his wife Lil, who had died a year earlier.

The preceding is excerpted from an upcoming book by Baylor professor and baseball historian John Wood. It has been edited for length.

Get the latest baseball news delivered to you!

Sign up to receive professional baseball news in your inbox every week.

Reaction to the death of Tommy Lasorda

Reaction to the death of Hall of Fame manager Tommy Lasorda. He died Thursday at the age of 93:

Sandra Scully, wife of Hall of Fame announcer, dies at 76

Francisco Lindor all smiles after trade from Indians to Mets

WASHINGTON (AP) — Now that they're both with the Washington Nationals, Kyle Schwarber recalls joking around with Dave Martinez when both were with the Chicago Cubs — Schwarber a slugger, Martinez a bench coach.

Carrasco: Mets primed for playoffs, can compete for title

Stan Musial made 24 All-Star appearances, tied for the most in baseball history with Hank Aaron and Willie Mays, but his reputation as a graceful, approachable man matched his ability on the field.

Stan “the Man” Musial is viewed as one of the greatest and most consistent hitters in baseball history, with a .331 career batting average and a total of 3,630 hits.

Stan Musial of the St. Louis Cardinals looks up to follow the ball after connecting for a double against the Milwaukee Braves in Milwaukee, Wis., June 27, 1961. The hit marked the 10,000th time at bat for “Stan the Man” in the major leagues, and just missed going out of the park.