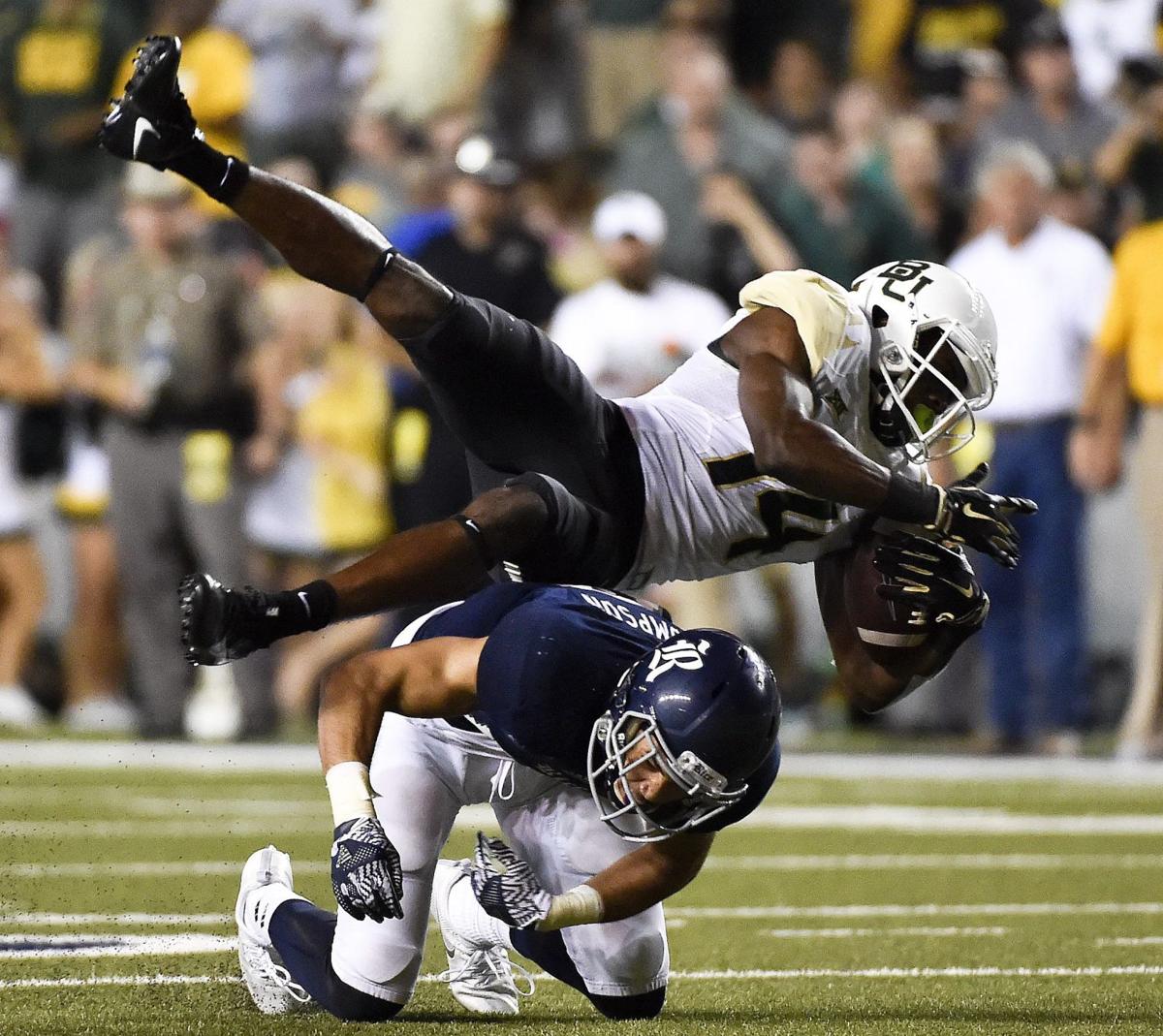 Baylor wide receiver Chris Platt is hit by Rice safety J.P. Thompson in the second half of Baylor’s 28-point victory over Rice on Friday. Platt hauled in five balls from quarterback Seth Russell for 45 yards. 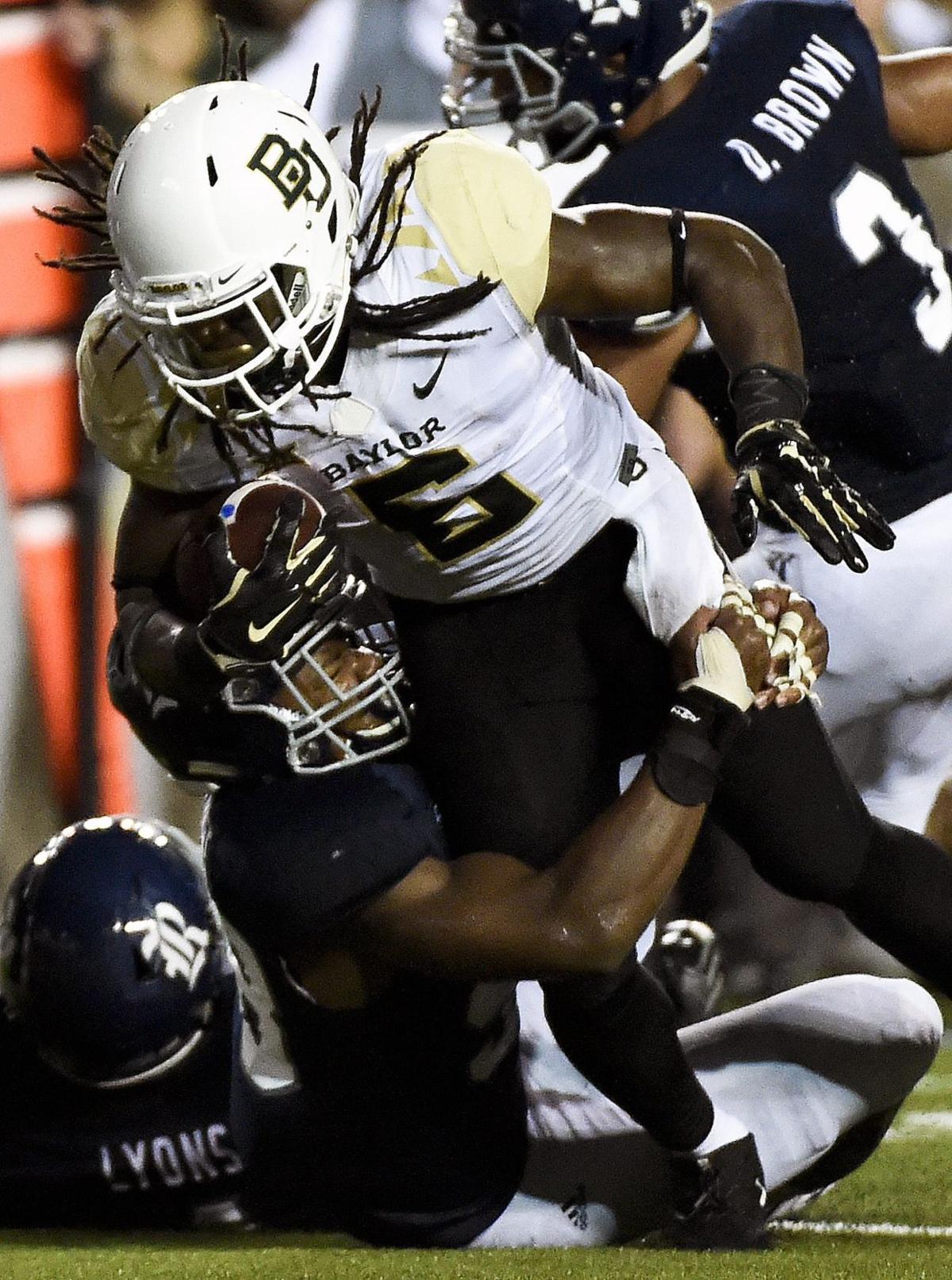 Baylor running back JaMycal Hasty is tackled by Rice linebacker Emmanuel Ellerbee during the Bears’ win on Friday night. Baylor has failed to score in the first quarter of both of its wins over SMU and Rice.

> APOLOGY: Rice says band may have gone 'too far' in Baylor satire

> BEST BEAR EVER: Vote for the greatest Baylor wide receiver of all time

Baylor didn’t become the nation’s most productive offense over the last five seasons by sitting in idle for the first 15 minutes of the game.

No. 21 Baylor failed to score in the first quarter in both their wins over SMU and Rice. The Bears pulled it together for a 40-13 win over the Mustangs and a 38-10 win over Rice to finish nonconference play with a 3-0 record.

But inefficient play early in games could begin to cost them as they open Big 12 play against Oklahoma State on Saturday at McLane Stadium.

“It’s definitely frustrating,” said Baylor quarterback Seth Russell. “We preach start fast, and we haven’t done that. But that’s just something for us to grow on. It’s an aspect of the game that we need to get better at.”

In their first road game against the Owls Friday night in Houston, Baylor looked completely out of sync in the first quarter. Russell was two of eight for 17 yards with an interception and Drew Galitz punted three times.

The Bears had difficulty finding the tempo they wanted and looked sloppy.

“The thing we had some problems with was we continue to struggle a little bit with running the pace we want to run,” said Baylor coach Jim Grobe. “I think we had some situations where we had their defense on their heels a little bit, but weren’t going as fast as we can go.”

The Russell to Cannon connection was too much for the Owls. Cannon became the first Baylor player in school history to record three 200-yard receiving games as he made nine catches for 213 yards and two touchdowns.

“All the defenses have been playing pretty soft,” Russell said. “They’ve been giving us underneath stuff. It was good to hit a couple deep ones. That’s something we work on a lot. We’ve done a good job of trying to execute those big plays when we can get them.”

With Corey Coleman and Jay Lee gone from last year’s team, Cannon knows he must be a leader for the younger players as one of the most experienced receivers on the team. In the last two games, Cannon has made 19 catches for 306 yards and three touchdowns.

Cannon turned a short pass along the right sideline into a 28-yard touchdown in the fourth quarter when he leaped over Rice cornerback J.T. Blasingame at the goal line. Cannon made the touchdown leap out of desperation after undergoing knee surgery in July.

“Really the reason I jumped is because I wasn’t trying to get hit on my bad knee,” Cannon said. “I just decided to jump over him. I feel like I’m getting closer to 100 percent. I feel more explosive this week.”

With so many young receivers seeing playing time, the route running still isn’t as crisp as it needs to be. The Bears also had several dropped passes, something that’s become an unwanted trend in the first three games.

As a fifth-year senior quarterback, Russell has tried to keep the young receivers from getting down on themselves.

“They’re upset at themselves just because they want to be great,” Russell said. “If I go over and jump on them it just makes them more upset and gets their head out of the game. I know they really want to be great, catch the ball and score touchdowns. My job is to go encourage them and say hey that’s over with, you can’t worry about that, let’s focus on this next play.”

While Shock Linwood rushed for 57 yards on 13 carries to become Baylor’s career rushing leader with 3,675 yards, Grobe equally distributed the load of the running backs. Hasty led the Bears with 105 yards on 14 carries while Williams added 79 yards on 12 carries.

“It was a little tougher for Shock to get the record because he wasn’t the only guy carrying the football,” Grobe said. “The thing that I’m pleased with is Terence Williams and JaMycal Hasty are pretty good running backs. Going forward that’s what I feel best about is we’ve got some depth at the running back position.”

Baylor’s defense has been much more consistent than the offense so far this season. The Bears limited the Owls to 265 yards total offense and played especially good pass defense. Rice starting quarterback Tyler Stehling hit just eight of 25 passes for 33 yards.

Playing for the first time this season following knee surgery in August, nickelback Travon Blanchard collected nine tackles. He amassed three tackles for nine yards in losses including a sack.

“It’s a blessing to be back,” Blanchard said. “I’ve been going through some tough times. This was my first injury ever, it was my first surgery ever. The defense stepped up and was able to get the ball back to the offense until they got going. It was a tremendous team effort.”

Patrick Levels replaced Blanchard during his absence, but they both started against the Owls in Baylor’s 3-4 defense. Levels collected five tackles and combined with defensive end K.J. Smith for a sack. The Bears were often in Rice’s backfield as they finished with nine tackles for loss.

“We gave up a few passes in the beginning, which opened up running lanes that they were able to capitalize on,” Blanchard said. “As a defense, I see a lot of places where we can get better, where I can get better. That was a good thing that we were able to get the win and also have plenty of things we can coach and get better at.”

HOUSTON — Was it a weird night or is this the new normal for the Baylor Bears?

HOUSTON – With former Baylor coach Art Briles watching from the stands, the No. 21 Bears didn’t exactly put on a memorable show for their old boss right out of the gate.

How to get Baylor vs. Oklahoma State on TV, radio

Baylor kicks off with Oklahoma State at 6:30 p.m. Sept. 24 from McLane Stadium on the Fox network. Here's how you can get the game:

How the Bears match up vs. Oklahoma State

Breaking down the game on offense, defense, special teams and more.

John Werner’s college picks: Baylor in a close one; WVU, A&M should win

Baylor hasn’t quite looked like its high powered teams of recent years, but it’s hard to argue with a 3-0 nonconference record.

The intensity always increases when Big 12 play rolls around. I think you can feel it.

When Taylor Young and Travon Blanchard arrived on the Baylor campus in 2013, they quickly launched into a pickup basketball game.

Because the job of running back becomes smoother as the ball carrier finds a rhythm, the running back-by-committee approach would seem to limit chances for glory. But in the view of Baylor’s coaches, it may lead to exactly the opposite.

No looking back: Gundy stands by 2014 decision to play Rudolph against Baylor

STILLWATER — Mike Gundy goes back to Waco, Texas, this weekend in a much different state of mind than the last time he was there.

Bears expect to find out where they stand against Oklahoma State

After three lopsided nonconference wins, No. 16 Baylor still doesn’t exactly know how to gauge itself as a football team.

Baylor wide receiver Chris Platt is hit by Rice safety J.P. Thompson in the second half of Baylor’s 28-point victory over Rice on Friday. Platt hauled in five balls from quarterback Seth Russell for 45 yards.

Baylor running back JaMycal Hasty is tackled by Rice linebacker Emmanuel Ellerbee during the Bears’ win on Friday night. Baylor has failed to score in the first quarter of both of its wins over SMU and Rice.