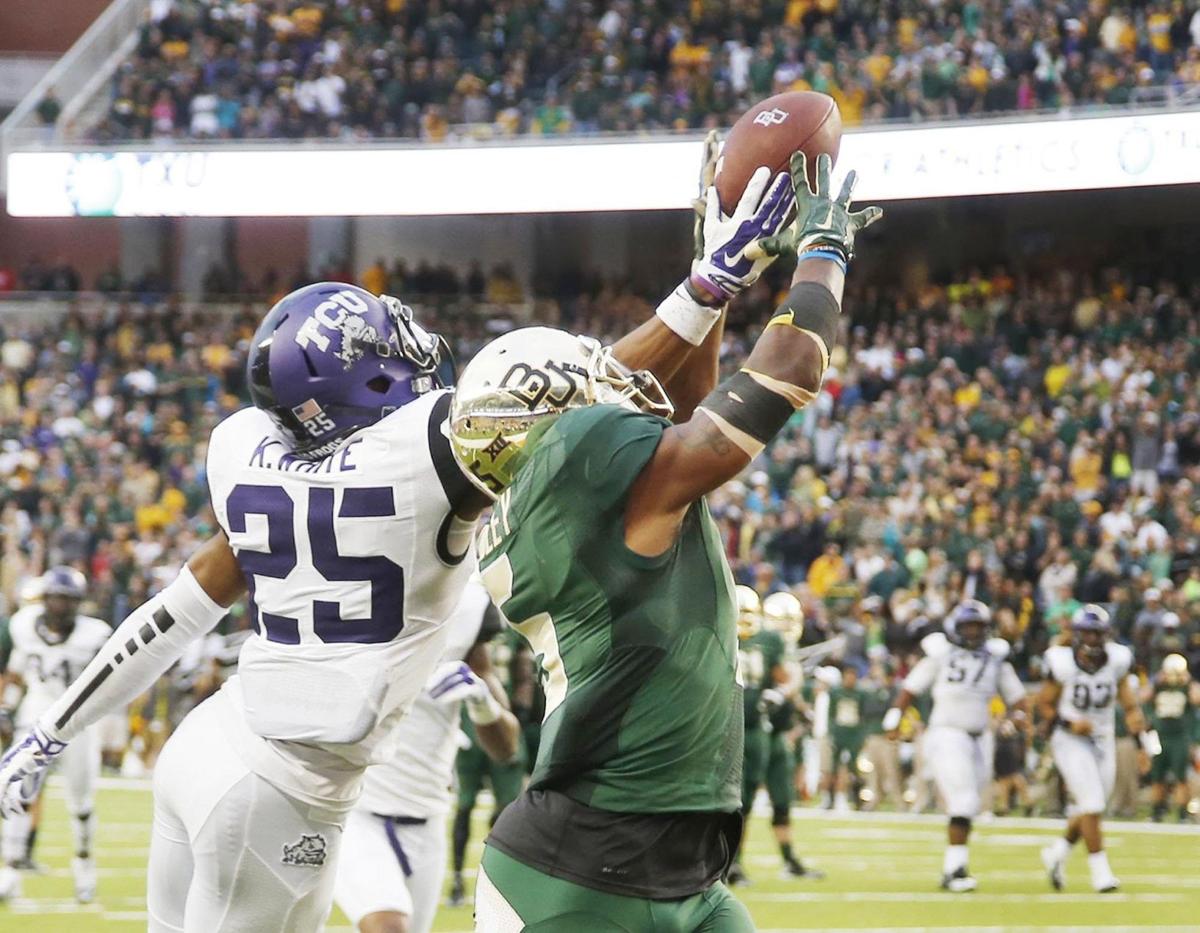 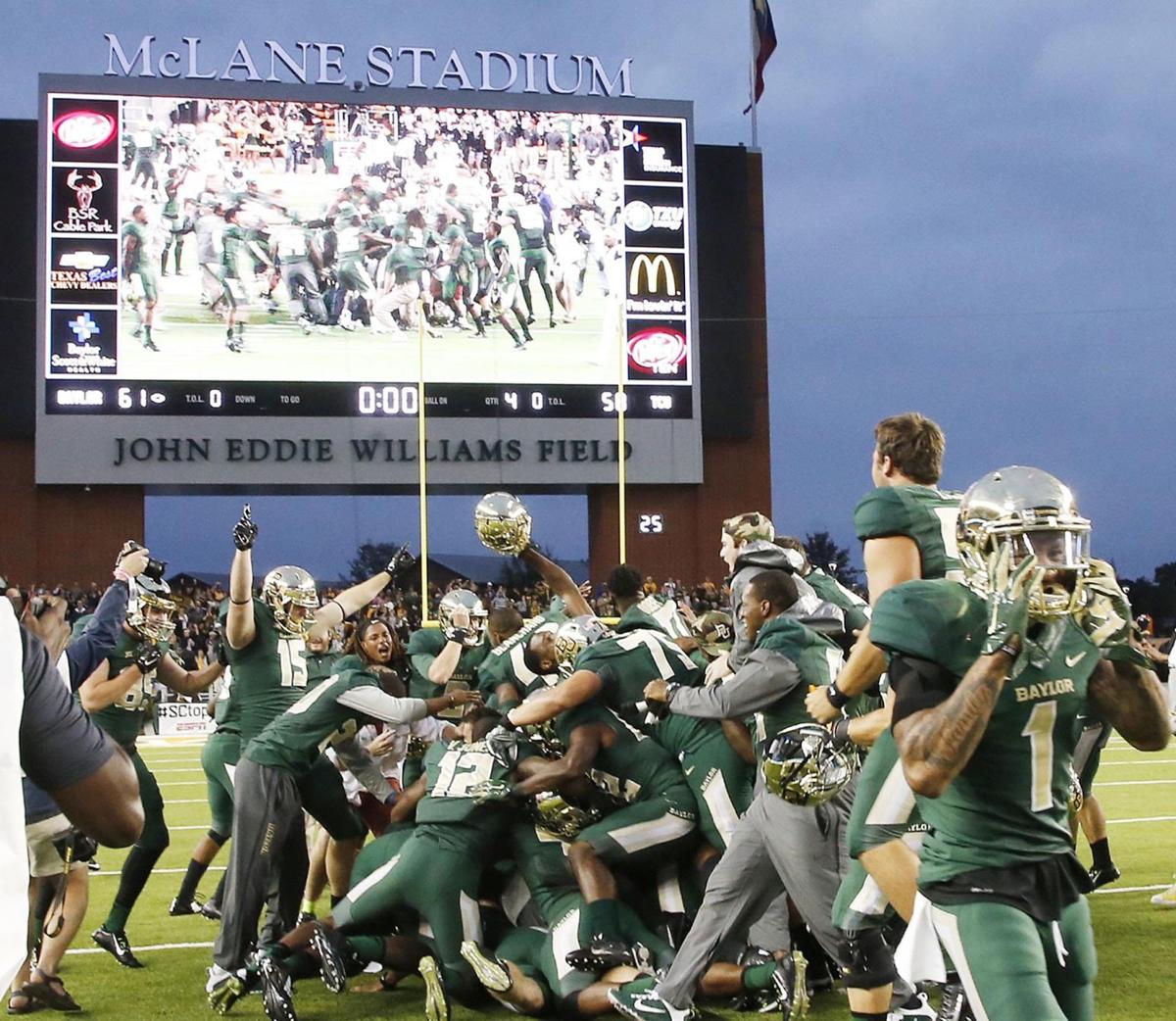 Baylor players dog-pile on kicker Chris Callahan after their win. Callahan entered Saturday with just one made field goal. He left with four more, including the game winner. 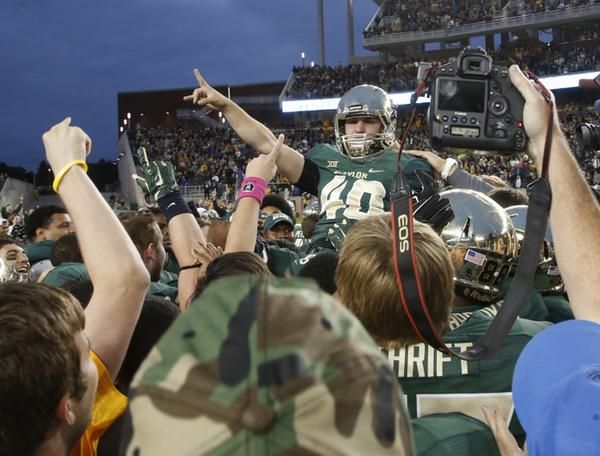 Chris Callahan made all four field goals he attempted Saturday, including the game-winner as time expired, 61-58. 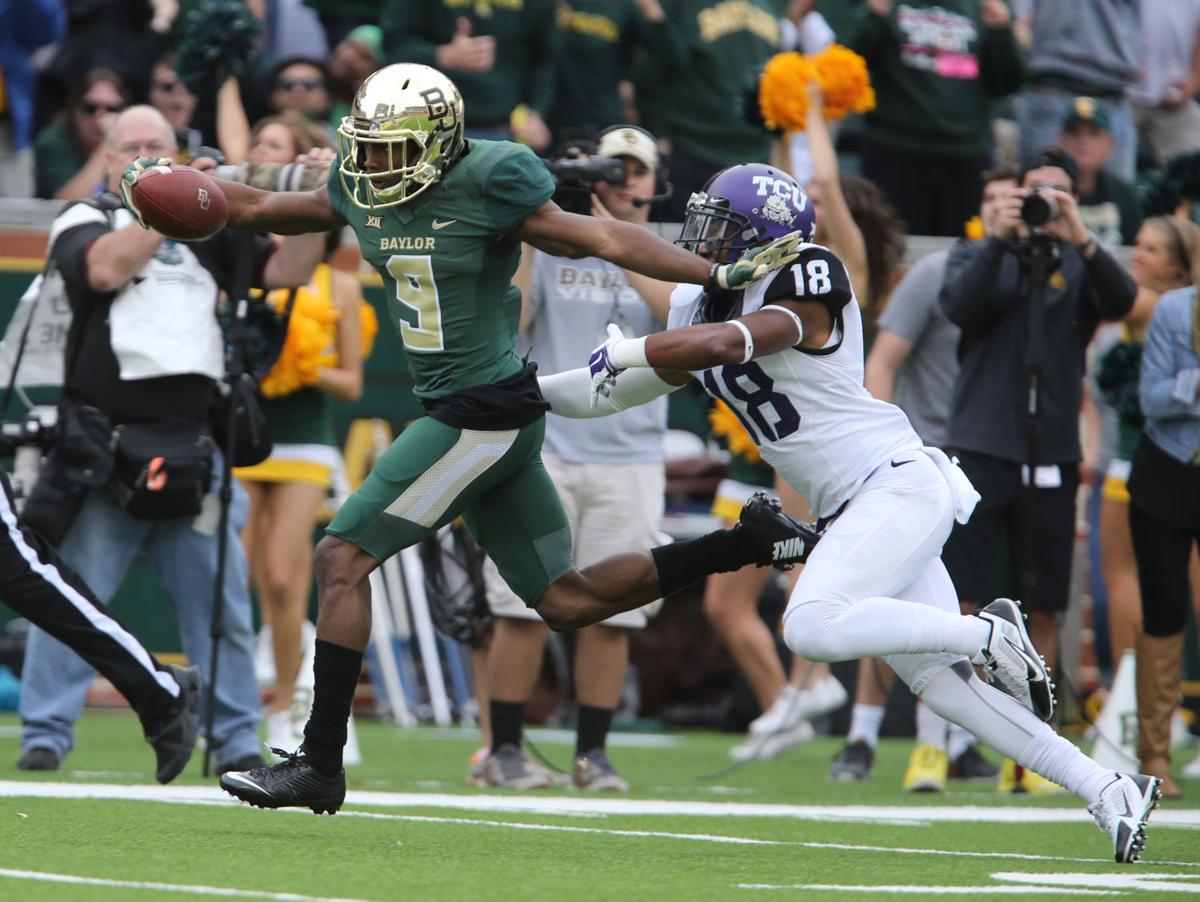 Baylor wide receiver KD Cannon scores past TCU cornerback Corry Omeally in the first half. The Bears came from behind to win, 61-58. 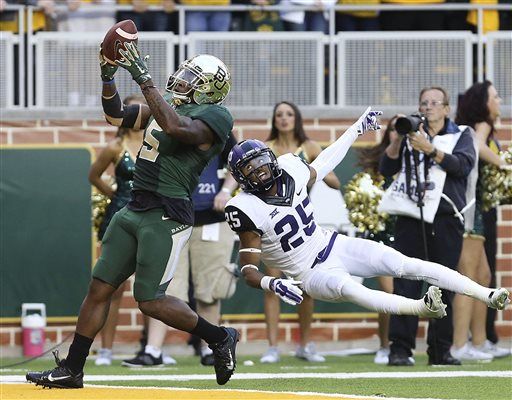 Baylor wide receiver Antwan Goodley pulls down a touchdown pass over TCU safety Michael Downing in the second half. 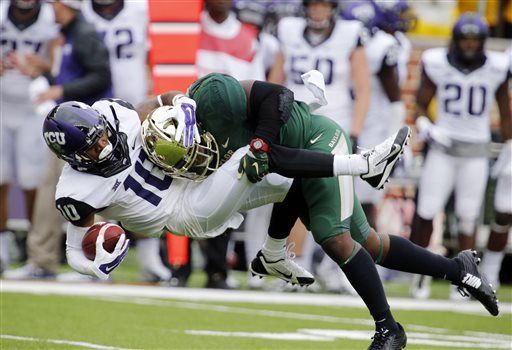 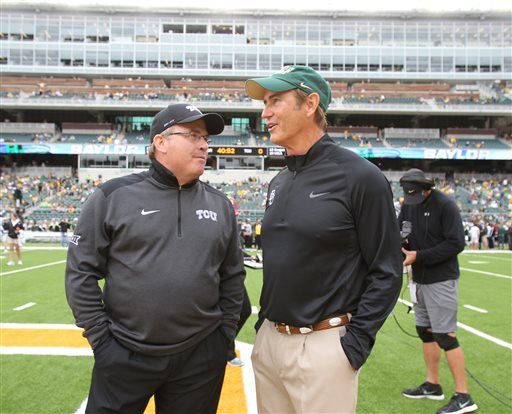 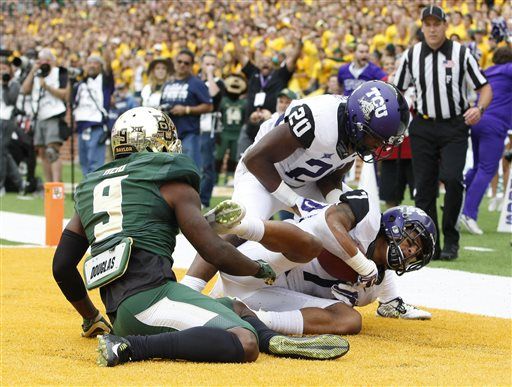 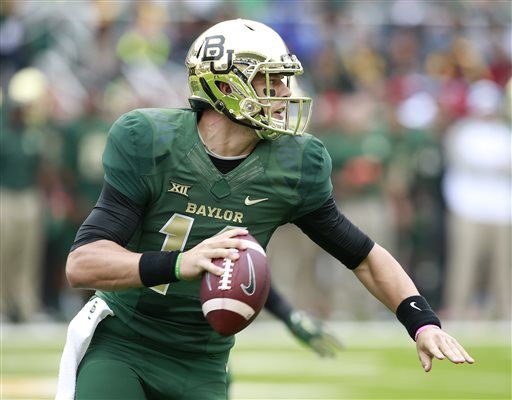 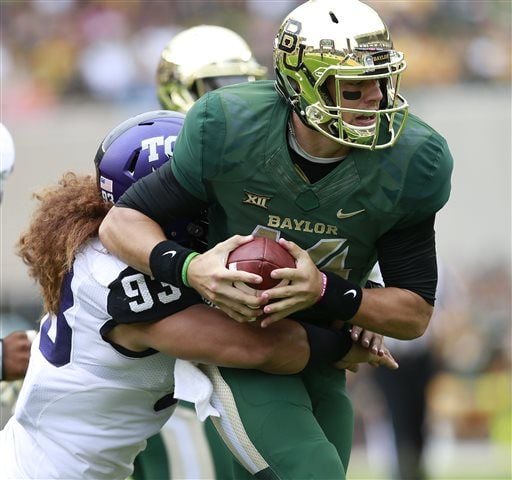 Baylor quarterback Bryce Petty is pulled down by TCU defensive end Mike Tuaua. Petty was sacked twice in the win. 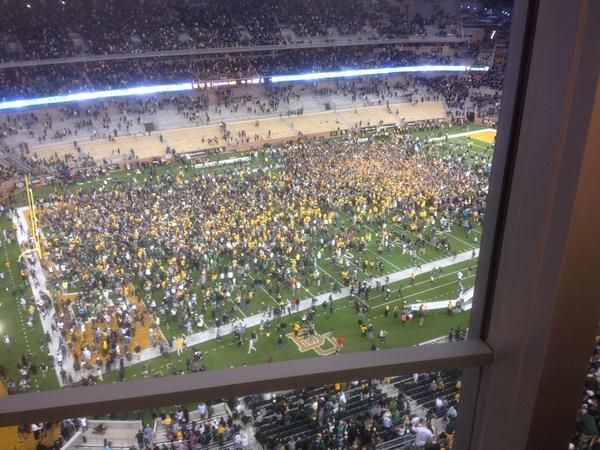 Baylor fans rush the field at McLane Stadium after the win.

Bears coach Art Briles waited until he heard the roar of the crowd before looking to see whether freshman kicker Chris Callahan’s field goal attempt sailed through the uprights.

The thunderous reaction of the 46,803 fans said it all: Callahan nailed the 28-yard field goal with no time remaining to lift the No. 5 Bears to an off-the-charts 61-58 comeback win over No. 9 TCU on Saturday night at McLane Stadium.

Storming back from a 21-point fourth-quarter deficit, Baylor matched its biggest comeback in school history. The game marked the first meeting of top 10 teams in Waco since 1956, but it was worth the 58-year wait.

“It was just a fabulous, fabulous win,” Briles said. “It says a lot about Chris to do what he did. It’s not an easy thing, but he stepped up and delivered for all of us. It was basically a chip shot unless you have to do it for the game winner in a tough situation.”

Coming into the game, Callahan had hit just one of six field goals but nailed three straight from 22, 29 and 20 yards against TCU before the Bears drove to the 11 with four seconds remaining.

With the game tied at 58, Callahan drilled the field goal as time expired before his teammates lifted him up on their shoulders and was swarmed by Baylor fans who ran out of the stands to celebrate with him.

“It’s what every kicker dreams about,” Callahan said. “You can only pray and hope for a moment like this. But when I kicked it, I took off running because I knew it was good.”

Callahan’s field goal lifted the Bears (6-0) to their third straight Big 12 win and their first over a Top 25 team. The odds couldn’t have been longer for a Baylor comeback when TCU (4-1, 1-1) opened up a 58-37 lead when Marcus Mallet intercepted a Petty pass and returned it for a 49-yard touchdown with 11:38 remaining in the game.

But Petty still believed, and he told his teammates there was still time to win regardless of what the clock read.

“I told our guys we’re not going to lose that game,” Petty said. “I knew looking at their faces that we were going to come back. With our offense and the way we play defense, being down by 21 points is not a big deal for us. We believe in each other and what we’re doing.”

The Bears began chipping away at TCU’s lead when Devin Chafin ran for a 7-yard touchdown with 10:39 left in the game.

After stopping TCU, the Bears moved 92 yards on just five plays to cut the lead to 58-51. Petty finished off the drive with a 28-yard touchdown pass to Antwan Goodley down the right sideline with 6:39 remaining.

The Horned Frogs couldn’t move again, but Ethan Perry’s 51-yard punt pinned the Bears at their own 9.

But Petty quickly got Baylor out of the hole by finding KD Cannon for 26 yards followed by an unsportsmanlike conduct penalty against TCU’s Chucky Hunter that moved the ball to the 50.

When Petty fired a 25-yard touchdown pass to Corey Coleman with 4:42 remaining, the game was tied at 58. In less than seven minutes, the Bears made up a 21-point deficit and had a chance to pull off the unlikeliest of wins.

“They put 60 minutes on the clock for a reason, and you play every one of them,” Briles said. “TCU was a hot team. They were extremely hot. We had to step up a little bit, and our guys did. We had stops on defense when we needed them in the fourth quarter and made plays on offense.”

The Horned Frogs answered with a pair of first downs before facing fourth-and-three at Baylor’s 45. Trevone Boykin misfired on a pass to Josh Doctson to give the Bears the ball with 1:11 remaining.

Facing third-and-13 on TCU’s 43, Baylor got new life when TCU cornerback Corry O’Meally was called for pass interference against Baylor’s Levi Norwood. The Bears let Shock Linwood pound TCU’s defense for 6, 9 and 2 yards to push the ball to the 11 with four seconds remaining to set up Callahan’s winning field goal.

It was the first time the Bears led the entire game.

After fumbling the ball in the first half, Linwood came back to finish with 178 yards rushing on 29 carries. His yardage was especially necessary since Baylor running back Johnny Jefferson missed the game with a pulled hamstring.

“I played angry in the second half,” Linwood said. “We found the rhythm in our running game and had to stay with it.”

The Bears finished with 782 yards total offense for the second most in school history. Petty hit 28 of 55 passes for a career-high 510 yards and tied the school record with six touchdown passes.

Petty rebounded in a big way from his worst statistical start when he hit seven of 22 passes for 111 yards in last week’s 28-7 win over Texas. He put up big numbers against one of the best defenses in the country.

“This was a statement game for us,” Petty said. “We know we’re never out of a game. It was a chance for us to prove we’re here to stay and it doesn’t matter who the opposition is.”

Boykin gave the Bears fits all day as he passed for 287 yards and rushed for 45. He helped the Horned Frogs jump out to a 14-0 first-quarter lead. The Bears rallied for a 24-24 tie before TCU’s B.J. Catalon returned a kickoff for a 94-yard touchdown with 1:38 left in the first half.

With eight seconds remaining in the second quarter, TCU lined up for a punt at Baylor’s 48. But TCU’s snap sailed over Perry’s head and Baylor’s Shawn Oakman recovered at the 12 with one second remaining.

With TCU clinging to a 34-30 lead late in the third quarter, Aaron Green turned his first carry of the game into a 59-yard run up the middle. He fumbled at the end of the run but Doctson came from behind and fell on it at Baylor’s 2.

On the next play, Trevorris Johnson popped up the middle for a 2-yard touchdown run to push TCU’s lead to 41-30 with 3:53 left in the third quarter.

The Horned Frogs turned to razzle-dazzle as Cameron Echols-Luper took a pitch and threw a 59-yard flea-flicker pass to Catalon for 59 yards to Baylor’s 9.

Two plays later, Green broke loose up the middle for a 6-yard touchdown to push TCU’s lead to 51-37 on the second play of the fourth quarter. When Mallet returned the interception for the touchdown a few minutes later, the game looked all but over.

But the Bears reeled off 24 unanswered points to pull off a win that left a lot of Baylor players in tears in the locker room.

“We had some guys in there, Shawn Oakman was one of them, that were just real quiet,” Briles said. “Just saying, ‘Coach, I’m just real thankful.’ He actually had tears in his eyes. ‘I can’t believe this happened. I’m just thankful to be a part of it.’”

If your head is still spinning from Baylor’s mind-boggling comeback against TCU, you’re joined by a large club that includes 46,803 fans at Mc…

On Monday afternoon, Baylor was still coming down from the high of its 61-58 comeback win over TCU at McLane Stadium.

Cornerbacks often talk about the importance of having short-term memory loss on the field, a kind of temporary amnesia. If you mess up — and s…

The resumption of the Baylor-TCU football feud remains six months away, but the angst is perpetual.

PHOTOS: Fans & fun at McLane Stadium for Baylor vs. TCU

Brice Cherry: Briles master of the chess board

There simply aren’t enough adjectives in the thesaurus to describe the utter craziness of it all. Trust me. I looked.

In the 115-year history of Baylor football, it had never had a comeback quite like the one it put together Saturday at McLane Stadium.

Autumn announced its presence Saturday with steady rainfall that lasted until about noon, giving way to cool temperatures and cloudy skies, bu…

VIDEO: Petty makes name for himself in Heisman conversation

In conjunction with Baylor's second-ever top-10 matchup in Waco vs. TCU this week, we dug into the archives for this original Dave Campbell game story from Baylor's first one against the Aggies in 1956.

Good defense can be hard to find in the Big 12, where potent spread offenses dominate.

Baylor players dog-pile on kicker Chris Callahan after their win. Callahan entered Saturday with just one made field goal. He left with four more, including the game winner.

Chris Callahan made all four field goals he attempted Saturday, including the game-winner as time expired, 61-58.

Baylor wide receiver KD Cannon scores past TCU cornerback Corry Omeally in the first half. The Bears came from behind to win, 61-58.

Baylor wide receiver Antwan Goodley pulls down a touchdown pass over TCU safety Michael Downing in the second half.

Baylor quarterback Bryce Petty is pulled down by TCU defensive end Mike Tuaua. Petty was sacked twice in the win.

Baylor fans rush the field at McLane Stadium after the win.