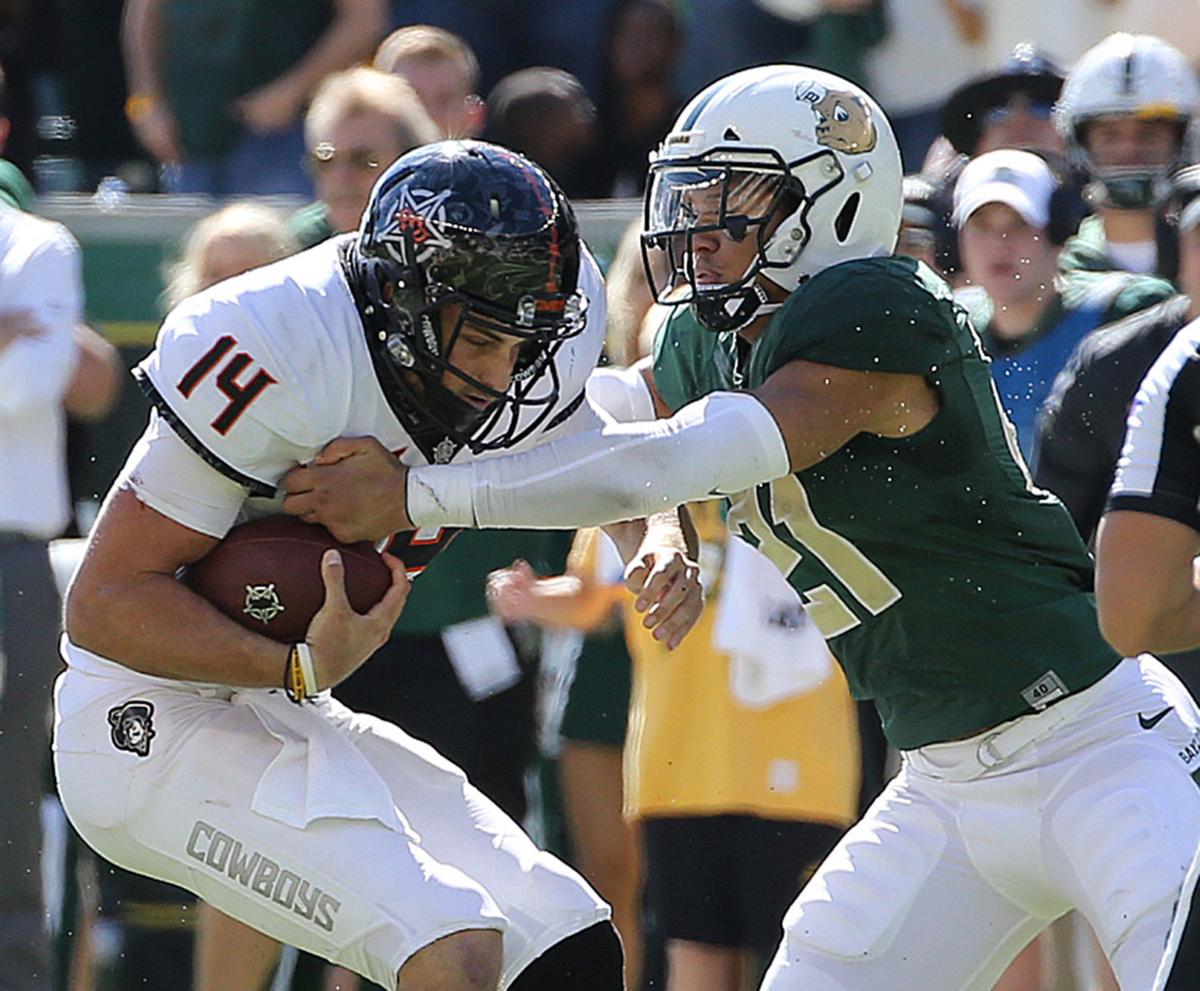 Baylor’s safety Blake Lynch (21) against Oklahoma State last season, was moved to linebacker for the last seven games. He believes his experience as both a linebacker and defensive back gives him a better understanding of the overall defensive scheme for the Bears. 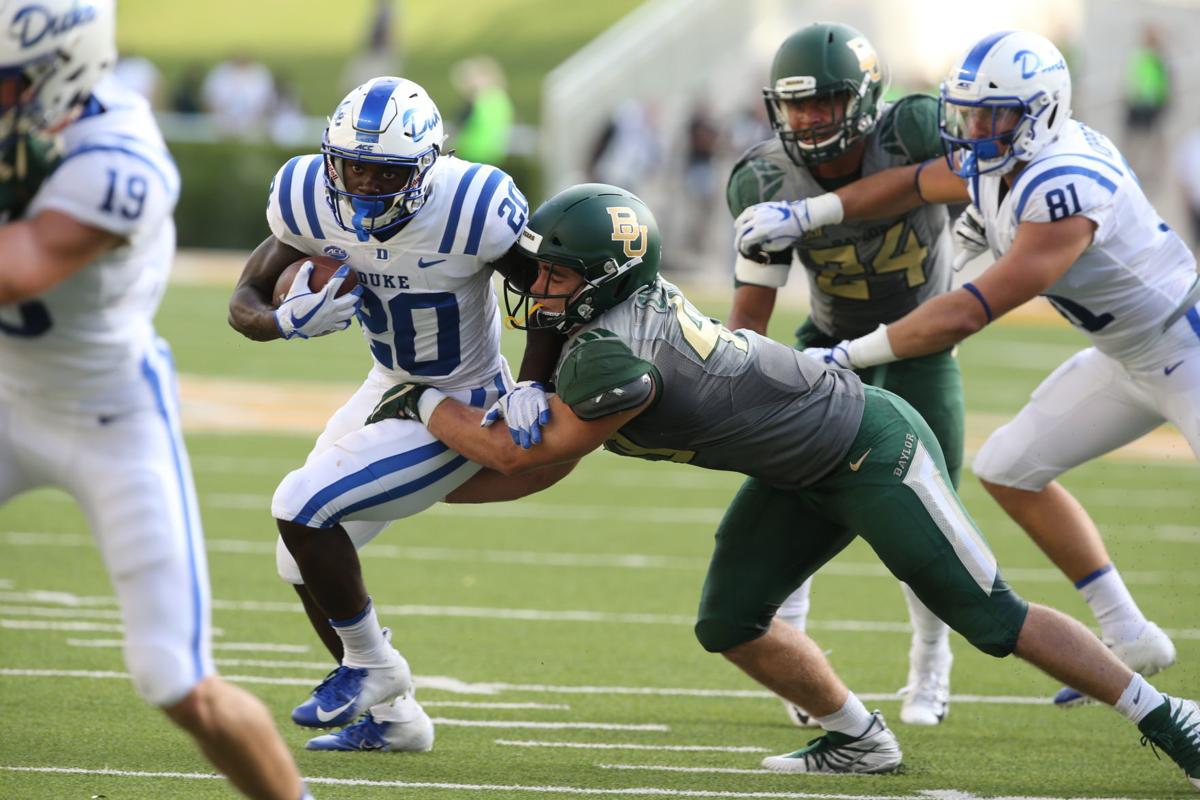 Baylor’s Clay Johnston pulls down a Duke player during the 2018 season. Coaches say the veteran player is able to pick up the nuances of the defense. 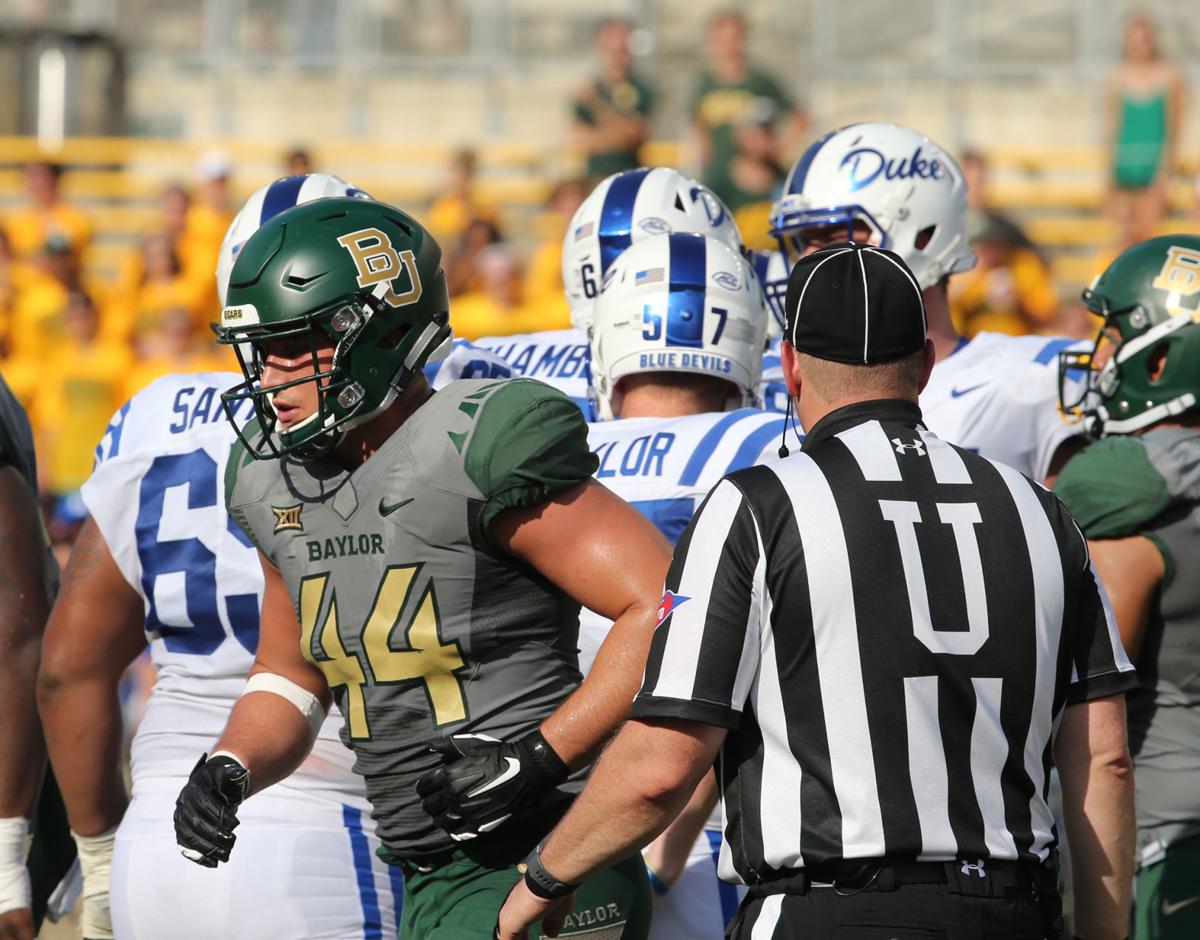 Baylor’s linebacker Clay Johnston (44), one of the Bears’ starting linebackers heading into the new season.

Baylor coach Mike Siravo never looks at his linebackers as a finished product.

It doesn’t matter that he coaches one of the most experienced positions on the team with seniors Clay Johnston, Blake Lynch and Jordan Williams all returning starters from last season.

In his eyes, they’re always a work in progress.

“There’s a long way to go, but they’re fighting,” Siravo said. “We’re challenging them right now to week by week raise the standard of camp. They’ve responded to that the last few days.”

For the Baylor defense to make the jump to the next level, the linebackers will have to lead the way because of their experience and knowledge of a complicated defensive package.

That all starts with Johnston, a preseason all-Big 12 middle linebacker who led the Bears with 99 tackles last season. Baylor coach Matt Rhule wants Johnston to maintain that consistency but also make an effort to create more turnovers for a defense that ranked at the bottom of the Big 12 by forcing just 10 turnovers last season.

With veterans like Johnston on board, Siravo can teach deeper defensive concepts instead of simply focusing on the fundamentals of the Bears’ defensive scheme.

“You have new guys come in and you’re coaching the basics,” Siravo said. “Then you have the older guys, and you get to really coach the nuances and what the offense is doing. So that’s what makes it fun having those guys out there. They know the standard we’re looking for and they can really coach the younger guys.”

While Johnston has been playing linebacker since he arrived at Baylor in 2015, Lynch is starting his second year at outside linebacker after previously playing wide receiver, running back and safety.

After starting the second game of last season at safety, Lynch started nine games at linebacker and finished with 47 tackles with four for loss and an interception. Siravo has seen how comfortable Lynch has grown at linebacker, but he wants him to become more of an impact player.

“He’s really started to understand how to play and that we need more physicality and he’s got to play harder,” Siravo said. “It’s a huge thing in a camp when you play the same position the whole time. The meetings are all the same and the film’s the same. Your brain is in the right place. He’s doing a nice job in terms of taking on a role.”

Though he’s happy to be entrenched at linebacker, Lynch believes that his experience playing other positions gives him a greater understanding of Baylor’s overall offensive and defensive schemes.

“I kind of know what everybody’s doing secondary-wise and know who to communicate with and who to talk to and who’s supposed to be where,” Lynch said. “I can read routes (by wide receivers) better and look at the splits better and stuff like that. Stuff some people probably don’t know about. It just helps me with the bigger picture. I’m getting pretty comfortable playing the SAM (linebacker) and being in Coach Siravo’s room.”

Williams is another veteran who started 11 games last year and made 52 tackles with four for loss. His upbeat personality and dedication to improving his game and helping others inspires his teammates and coaches.

“He loves football,” Siravo said. “He’s coaching everybody. He’s reminding everyone of the situations, and he plays really hard when he’s out there. He’s a passionate kid about football and we need that to be contagious.”

Sophomore Terrel Bernard saw a lot of action as a redshirt freshman last season as he finished with 47 tackles, a sack and an interception. Sophomore Ashton Logan and freshmen Solo Turner from Prestonwood Christian and Will Williams from El Paso Chapin could also see some time as backup linebackers.

On Tuesday, Rhule pointed out how Williams has caught the attention of defensive coordinator Phil Snow and his staff with his effort and thirst to grasp every bit of knowledge.

Siravo has tried to get his linebackers to think of themselves as the players who should be making the tackles instead of the secondary.

Forcing more turnovers has also been a major theme throughout spring drills and preseason camp. The Bears intercepted just seven passes and forced three fumbles during their 7-6 season in 2018.

“We want to limit the explosive plays and get turnovers,” Lynch said. “When you get a turnover, it just changes the game, and that’s what we want to do on our defense is get the ball back to our offense. I think it’s just getting comfortable with the defense and playing faster.”

Baylor coach Matt Rhule saw a lot of highlights in last Saturday’s closed scrimmage at McLane Stadium, but watching the offense make too many …

Bears not overlooking SFA in opener

Baylor will be heavily favored in Saturday night’s season opener against SFA, but Matt Rhule isn’t looking past the Lumberjacks because he res…

Baylor’s safety Blake Lynch (21) against Oklahoma State last season, was moved to linebacker for the last seven games. He believes his experience as both a linebacker and defensive back gives him a better understanding of the overall defensive scheme for the Bears.

Baylor’s Clay Johnston pulls down a Duke player during the 2018 season. Coaches say the veteran player is able to pick up the nuances of the defense.

Baylor’s linebacker Clay Johnston (44), one of the Bears’ starting linebackers heading into the new season.