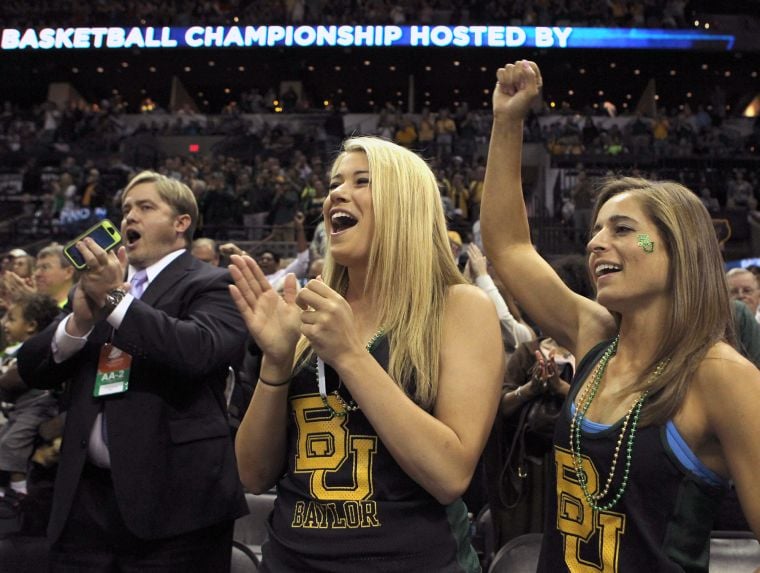 Kelli Newton (center) and her friend Rachel Tears cheer the Baylor men in San Antonio Friday before they headed back to Waco to watch the Lady Bears play at the Ferrell Center. 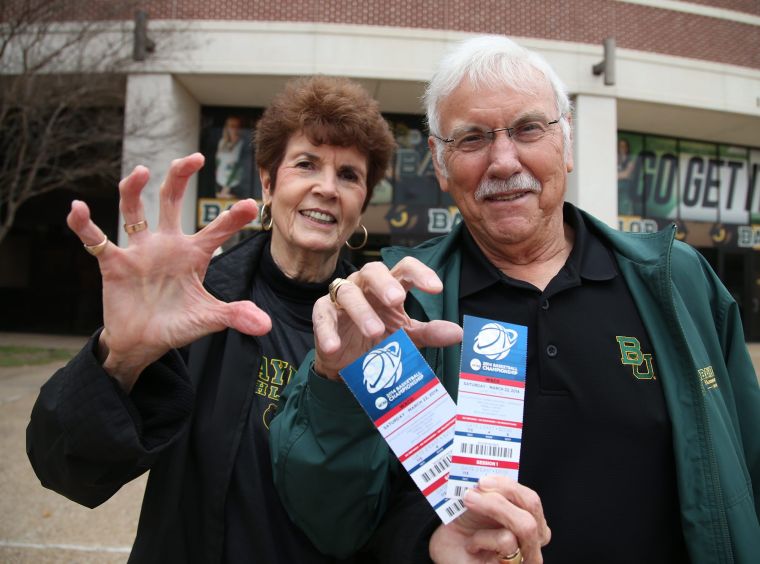 Staff photo-Rod Aydelotte Barbara and Wayne Purselley wait outside the Ferrell Center Saturday prior to the Baylor women's NCAA Tournament game Saturday. They were in San Antonio Friday for the men's second-round game and will on Sunday they will return to San Antonio for the men's game against Creighton. 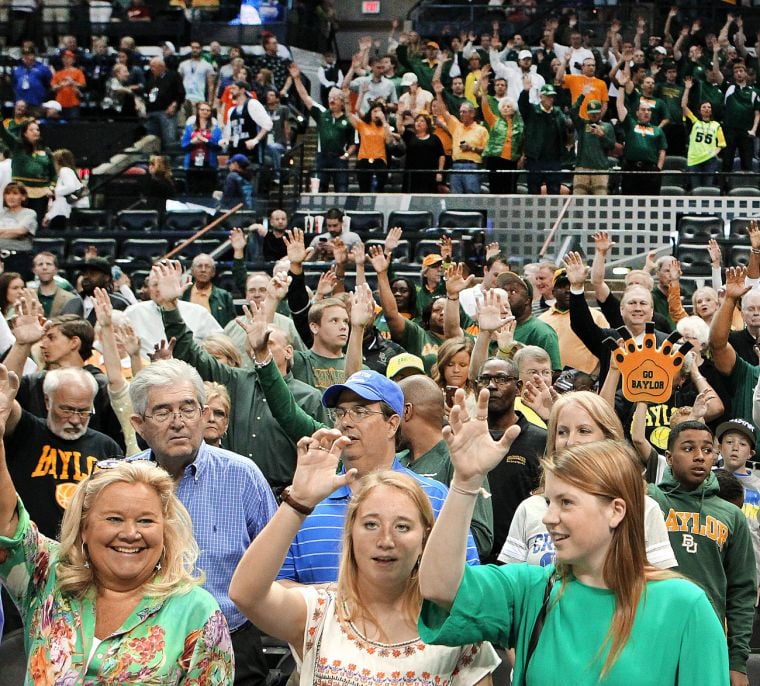 Staff photo -- Jerry Larson Baylor fans were out in force at San Antonio for the Baylor men's second-round NCAA Tournament game Friday. Some were headed back to Waco for the women's game Saturday and will return to San Antonio Sunday for the men's game.

Baylor basketball fans have been sharing “Sic ’ems” up and down Interstate 35 this weekend in following both the men’s and women’s basketball teams in the NCAA tournaments.

Both teams started their NCAA tourney runs in Texas arenas — the men with a 74-60 win Friday against the University of Nebraska Cornhuskers at the AT&T Center in San Antonio, and the Lady Bears’ 87-74 victory Saturday against Western Kentucky at home in the Ferrell Center.

The men will be in San Antonio again on Sunday night taking on Creighton University, while the women will play the University of California in Waco on Monday.

With the teams playing on different days, some Baylor super fans felt it was a no-brainer to travel back and forth between the two cities during the opening tournament weekend to cheer the players to victory.

“I support both of the teams in the season, and this seems to be the most critical time of year to support the team, the NCAA tournament is kind of what you play for,” Temple attorney and Baylor alum Billy Ray Hall said. “I didn’t want to pick; I wanted to support both of them and try to get them in the Sweet 16, if they can.”

The past two weeks have been a blur of green and gold for Barbara and Wayne Purselley of Waco. The couple cheered on the Lady Bears in their Big 12 Tournament games in Oklahoma City, then headed to Kansas City, Mo., to watch the men’s rounds.

They hadn’t fully unpacked their bags before gearing up to drive to San Antonio, but rather than being exhausted by their travel plans, they were eager to make the two round trips to support both teams.

“We’re blessed and so grateful that we get to do that,” said Barbara Purselley, a retired teacher. “We really enjoy the things Baylor has done. They’re great people to be able to follow, the kids are great kids and smart kids. Baylor’s sort of one of a kind.”

The couple has had season tickets for all Baylor basketball and football games for more than 30 years, and also attend home baseball games. Though both graduated from Texas A&M, they became die-hard Baylor fans as their son Timothy Purselley played defensive end during Coach Grant Teaff’s tenure with the football team.

“We always go when we can, Lord willing, to the Big 12 tournaments, to the football games both in town and out of town, and to the bowl games,” Barbara Purselley said.

Baylor senior Kelli Newton graduates in December, and she has made attending all the major Baylor sports events a priority for her final year on campus. Her dad surprised her with tickets to the NCAA tournament as her birthday present, scoring second-row seats right behind the Baylor bench.

Newton made the journey back and forth between Waco and San Antonio with her best friend, Rachel Tears.

“I love both of them,” Newton said. “I go to men and women’s games all the time. Isaiah Austin and Cory Jefferson, they’re all in my communications classes. Brady Heslip is in a lot of my classes as well, so it was really fun to see my friends play. Baylor is so small, it’s nice that you actually get to know the people that are on the teams.”

Patty Castilleja tapped her nephew as her companion for the San Antonio trips since the 11-year-old has become an avid basketball fan and has closely followed the Bears for the past three years.

Castilleja is a member of the Bear Foundation and has had season tickets for the Lady Bears games since Brittney Griner’s first year on the team. Her sister and dad are her seatmates at the Ferrell Center for the opening rounds of the women’s games in the tournament.

She relied on the State Highway 130 toll road, which circumvents Austin, for easier trips back and forth to San Antonio.

“It’s so close, and I like to go to them if they’re close, plus it’s rare that (the NCAA tournament) is here; it’s always so far away,” Castilleja said. “I’m hoping they both go to the Final Four. I think they can do it.”

Long before the men learned of their tournament location, Hall and his wife, Maria, were already planning to be in San Antonio on Friday for a special engagement for a former Lady Bear. The couple was invited to the wedding of San Antonio Stars forward Sophia Young, who helped lead the Baylor women to their first NCAA championship in 2005.

“When we found out the men were going to be playing in San Antonio on the same day, my wife said, ‘Let’s go ahead and do both.’ But I told her there was probably going to be a conflict,” Hall said. “But by some stroke of luck, Baylor got the first game of the day in the morning — who gets an 11:40 a.m. (start)?’ ”

Hall joked that he had to double-check that he would have enough clean Baylor gear for the four back-to-back games. Though the travel schedule is intense, he said he thinks it’s important for fans to show dedication to both teams equally, because both are playing on Texas turf.

“People always say that Waco always brings a lot of support at home, but if we’re all in San Antonio (for the men’s game), we can’t say that this year,” Hall said. “The women need the support, too, since they’re in Waco.”

The Purselleys already are contemplating whether they will be able to get airline tickets to Anaheim, Calif., if the men pick up another win Sunday night to make it into the round of the Sweet 16.

“We’ll cross that bridge when it gets to us,” Barbara Purselley said.

All it took was one tweet for the beast to be unleashed in Baylor senior forward Mark Vital.

Back in rhythm on the road: Baylor Lady Bears thump Oklahoma State, 77-58

STILLWATER, Okla. — Like Willie Nelson, the Baylor Lady Bears got back in rhythm on the road again.

The Baylor softball team has begun workouts for the 2021 season, but the recent death of former assistant coach Mark Lumley is still heavy on …

Kelli Newton (center) and her friend Rachel Tears cheer the Baylor men in San Antonio Friday before they headed back to Waco to watch the Lady Bears play at the Ferrell Center.

Staff photo-Rod Aydelotte Barbara and Wayne Purselley wait outside the Ferrell Center Saturday prior to the Baylor women's NCAA Tournament game Saturday. They were in San Antonio Friday for the men's second-round game and will on Sunday they will return to San Antonio for the men's game against Creighton.

Staff photo -- Jerry Larson Baylor fans were out in force at San Antonio for the Baylor men's second-round NCAA Tournament game Friday. Some were headed back to Waco for the women's game Saturday and will return to San Antonio Sunday for the men's game.