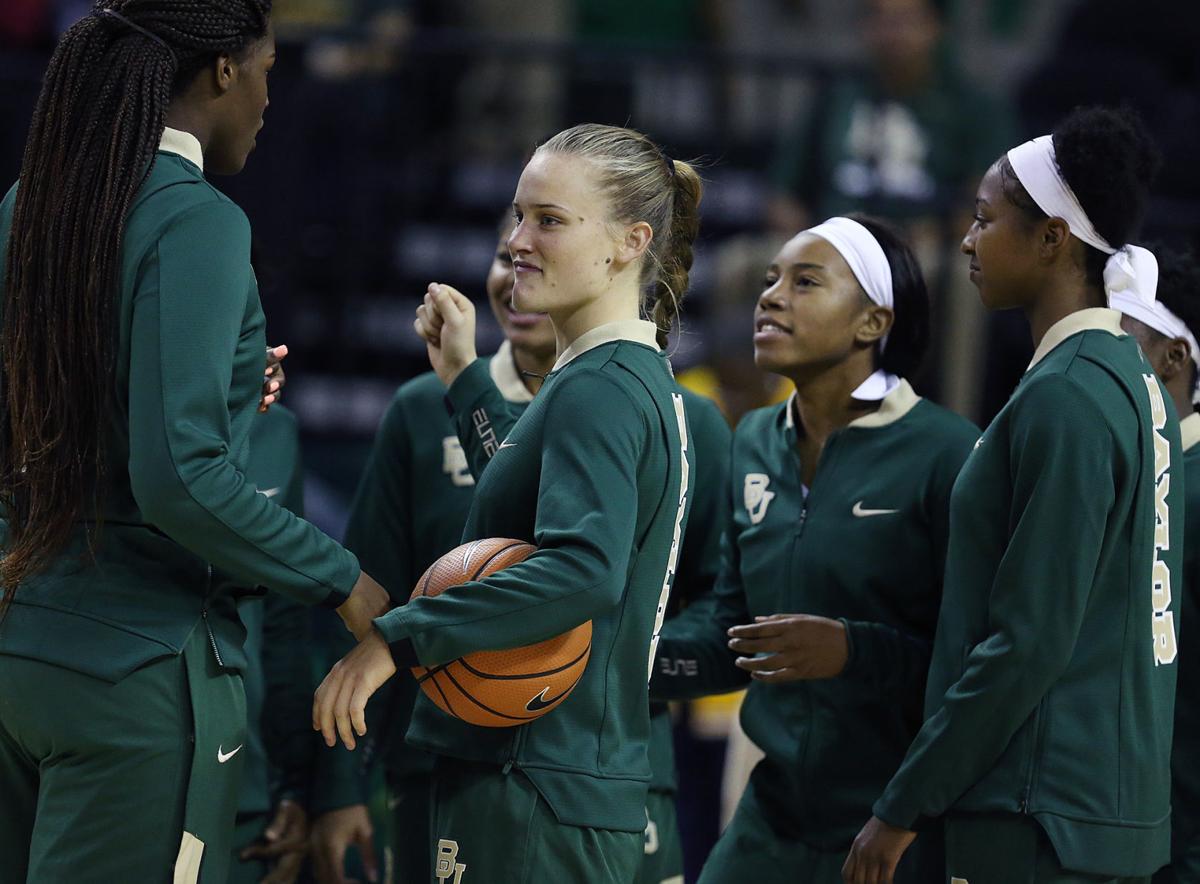 Baylor guard Kristy Wallace (4) looks out before a second half with the rest of the LadyBears. 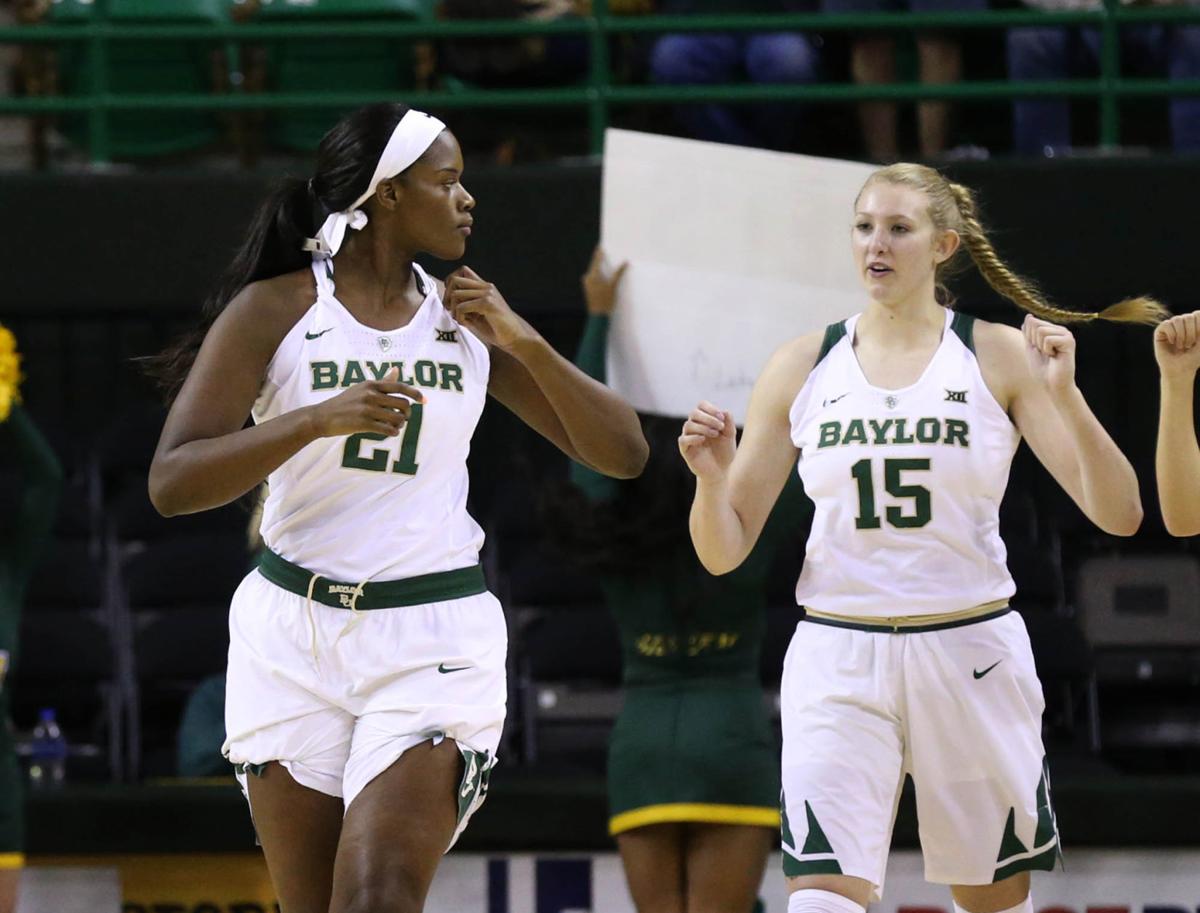 Kalani Brown (left) and Lauren Cox are looking forward to the team’s travels to Italy.

Coming off a big win at Texas Tech Saturday afternoon, No. 3 Baylor turns around quickly to host Oklahoma. The two programs have combined for 11 of the last 13 Big 12 regular season titles.

Here are five things to watch when the Lady Bears and Sooners clash at 8 p.m. Monday inside the Ferrell Center.

Baylor’s Monday night contest against Oklahoma will be the Lady Bears’ fifth game in 12 days. Compare that to Baylor’s schedule earlier in January when the Lady Bears played three games in 11 days.

“We’re going to get out of here and we’re going to get in the film room (Sunday),” Baylor head coach Kim Mulkey said after Saturday’s win at Texas Tech. “I don’t know how much we can do on the floor (Sunday). I feel like I’m on an NBA schedule. You can’t just go out there and practice in between the games. There’s not much time, and you’re trying to keep the legs from becoming dead.”

The win marked the first two-game win-streak for the Sooners for the first time since the first week of January.

When Baylor and Oklahoma faced off in mid-January, Lauren Cox and Kalani Brown combined for 17 points as they two played 33 and 15 minutes respectively. The duo did combine for 18 of Baylor’s 47 rebounds.

The pair goes up against Oklahoma’s Vionise Pierre-Louis who leads the Sooners with 15.5 points per game off 60.3 percent shooting from the floor.

In Baylor’s win at Oklahoma, seniors Kristy Wallace and Dekeiya Cohen led the way. Wallace finished with 15 points to join the 1,000-point club at Baylor, while Cohen had what Mulkey called her best game at Baylor.

Cohen didn’t just stay at one position and excel at it. One minute she was out on the perimeter guarding Oklahoma’s 3-point shooter Gabbi Ortiz. The next play, she was inside defending Pierre-Louis.

And when Cohen was on Pierre-Louis, the Oklahoma big didn’t score.

“You can’t be any more proud of your two seniors,” Mulkey said after the win in Norman. “Your two seniors carried your ball club today.”

Since then, Wallace and Cohen have continued to play well for the Lady Bears. Wallace has scored in double figures in four of the six games after Oklahoma, including a 27-point performance against Texas and a 25-point game at West Virginia.

After Cohen sat out at Iowa State, she’s scored in double figures in each of the last three games.

Baylor is currently atop the league standings with an 11-0 record. Texas is Second at 9-2.

Only seven games remain in the regular season for the Lady Bears. Baylor hosts Oklahoma (Feb. 5) and TCU (Feb. 10) before traveling to Oklahoma State (Feb. 13). The Lady Bears return to the Ferrell Center to host Kansas (Feb. 17) before back-to-back road contests at Texas (Feb. 19) and TCU (Feb. 24). Baylor wraps up Big 12 regular season action at home against West Virginia (Feb. 26) before the Big 12 Championships tip off March 2.

No. 3 Baylor vs. Oklahoma

Baylor obviously likes the taste of Sugar. So much that the Bears are headed to the Sugar Bowl for the second time in three seasons.

ARLINGTON — Six seasons ago, Jairon McVea arrived at Baylor in virtual anonymity as a walk-on way off everybody’s recruiting radar.

Have you stopped smiling yet, Baylor fans?

Baylor guard Kristy Wallace (4) looks out before a second half with the rest of the LadyBears.

Kalani Brown (left) and Lauren Cox are looking forward to the team’s travels to Italy.