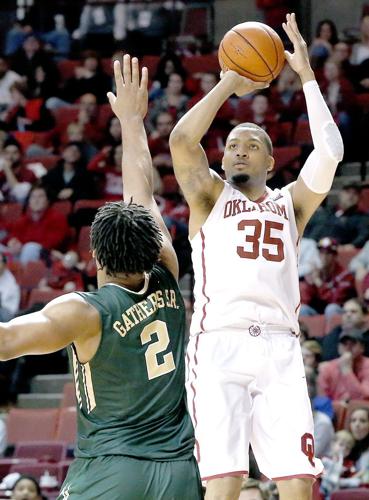 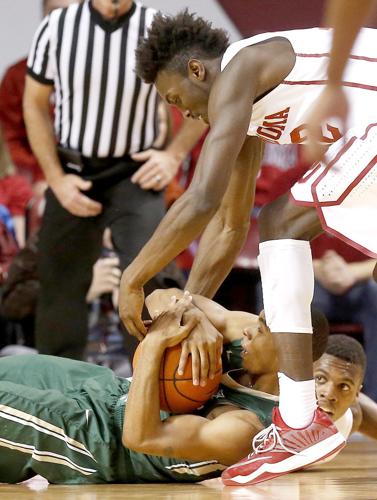 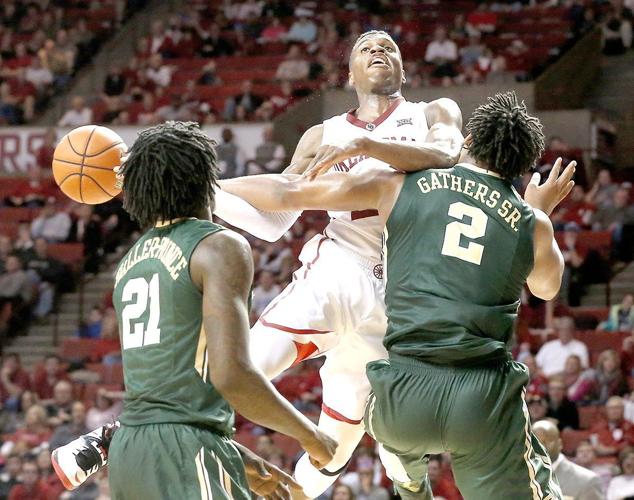 NORMAN, Okla. — After facing unranked teams throughout nonconference, No. 22 Baylor knew it would be a huge step up to play No. 18 Oklahoma on the road in the Big 12 opener.

Regardless of the Sooners’ national ranking, Norman has historically been a tough place for the Bears to win under any circumstance.

With TaShawn Thomas finishing with 24 points and Buddy Hield hitting 20, the Sooners pulled away from the Bears in the second half for a 73-63 win before 7,560 fans on Saturday at the Lloyd Noble Center.

“Oklahoma did what you’re supposed to do, win your home games,” Drew said. “They’ve got a great team and Coach (Lon) Kruger does a very good job, and you can see why people think so highly of them. You’ve got to give a lot of credit to OU’s defense. Those guys really got after it and made shots tough.”

Despite a career-high 24 points by Baylor freshman forward Johnathan Motley, the Sooners (10-3) limited the Bears to 37.3 overall shooting and 33.3 percent from 3-point range. While Motley and Taurean Prince combined to hit 15 of 24 shots and score 41 points, the rest of the team hit just seven of 35 shots and scored 22 points.

Baylor seniors Royce O’Neale and Kenny Chery had a particularly tough time scoring. After nailing five 3-pointers and scoring 23 points in Baylor’s 92-51 win over Norfolk State on Tuesday, O’Neale missed all five of his field goal attempts and finished with four points against the Sooners.

Though Chery dished out six assists, he hit just two of nine shots and scored four points. The Bears missed numerous shots on drives in the paint in the second half.

“We missed a lot of layups, but there’s a reason you miss layups with the pressure they put on and the way they contest shots,” Drew said. “OU was top 10 defensively in the nation coming in, and they showed that tonight.”

The Bears (11-2) limited the Sooners to 40.7 percent shooting but had few answers for Thomas, a senior transfer from the University of Houston. The Killeen High School graduate hit 11 of 17 shots and collected eight rebounds.

“I didn’t feel like I played to my potential during nonconference, but this is a new season and a new beginning,” Thomas said. “I came out with a fresh mindset and tried to play strong. I’m getting more comfortable with the offense and where the players are on the court. They make it easier for me.”

While Thomas dominated inside for the Sooners, Hield and Isaiah Cousins each drained four 3-pointers. Cousins chipped in 19 points and eight rebounds while Hield collected 10 rebounds to finish with a double-double.

“We were giving up 2s and didn’t want to let them beat us with 3s,” Prince said. “But we did a poor job of limiting their 3s. We have to do a better job of closing out defensively on the perimeter. We missed some defensive assignments and made some bone-headed plays that we normally make.”

Playing his first Big 12 game, Motley scored Baylor’s first six points and showed his aggressiveness with a pair of dunks.

“My teammates kept feeding me the ball and I was making them better and giving them assists,” Motley said. “It was a little physical playing against OU, but nothing we hadn’t prepared for.”

With Prince coming off the bench to hit three first-half 3-pointers, the Bears hung with the Sooners. The game was tied before Oklahoma scored the final four points of the half on Thomas’ dunk and Cousins’ short jumper to take a 37-33 lead.

But Oklahoma quickly took command in the early minutes of the second half to force Baylor to play catch-up the rest of the way. Thomas scored inside twice and Cousins drained a trey to give the Sooners a 46-37 lead with 15:42 left in the game.

“Our starting point defensively was better in the second half and our awareness was a little better,” Kruger said. “We did a pretty good job moving the ball in and out offensively. We had a nice run and slowly pulled away.”

The Bears had several chances to make the game closer but kept missing shots on drives to the paint. Though the Sooners also had difficulty scoring, they opened up a 58-46 lead when Hield nailed a trey with 6:22 remaining.

With the Bears shooting just 29 percent in the second half, they never threatened to take the lead the rest of the way. It won’t get any easier for the Bears as they face No. 13 Kansas on Wednesday at the Ferrell Center.

“None of them are easy,” Drew said. “It’s the best conference in the country.”

The Baylor track and field program announced a pair of staff changes on Wednesday.

Baylor defense could be even better than last season

In an era when ridiculously talented quarterbacks and high scoring offenses get 90 percent of the publicity, Baylor proved last season there’s…

Go ahead. Rip down the goalposts if you want. Baylor’s football season is still roughly a month away, but already Bear fans are celebrating a …

Baylor offensive preview: QB settled, but most skill positions up for grabs

Bears aware of target on their backs in tough Big 12

Coming into last season, nobody circled Baylor as a must-win game. Except perhaps TCU, which always has it out for the Bears.

Defending Big 12 champion Baylor continued to get a great deal of respect as the Bears were picked No. 10 in the USA Today preseason coaches poll.

The Baylor women’s basketball team was selected to participate in the 2022 Gulf Coast Showcase, Nov. 25-27, at Hertz Arena in Estero, Fla.

Griner back in Russian court

KHIMKI, Russia — American basketball star Brittney Griner was back in court on Tuesday for her trial for cannabis possession amid U.S. diplomatic efforts to secure her release.