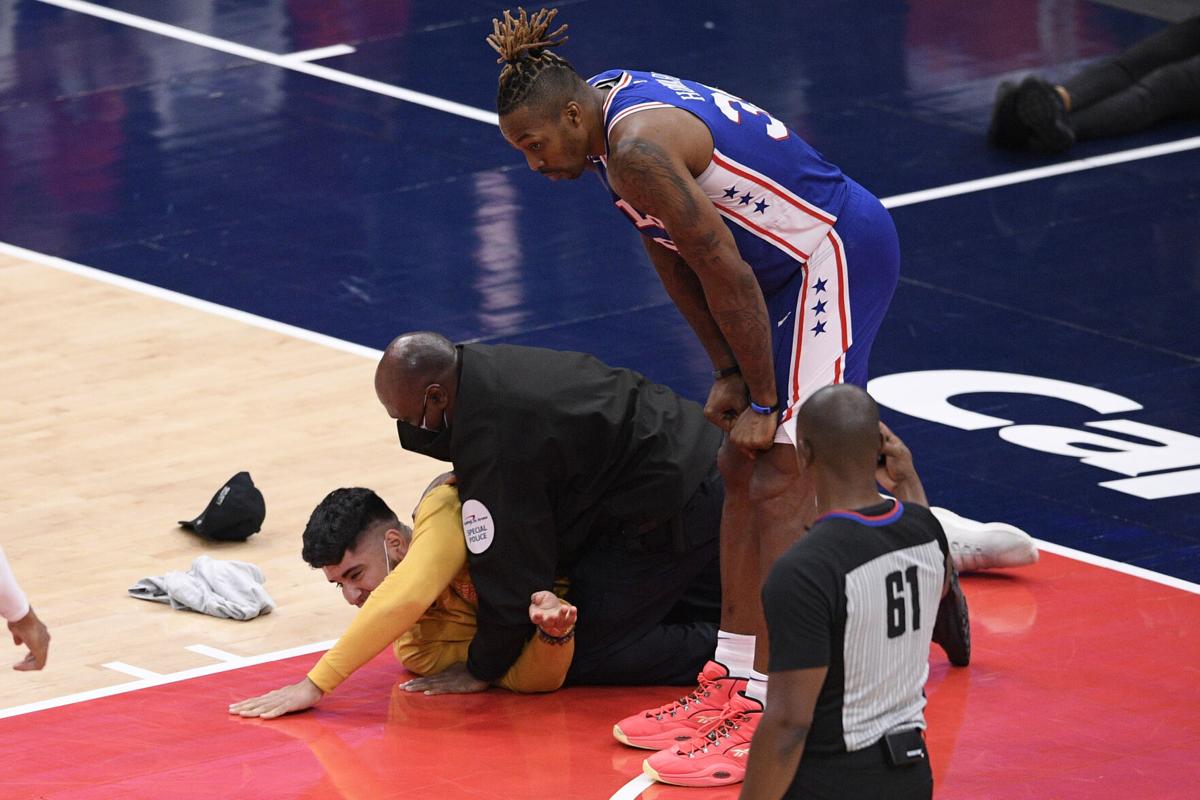 Philadelphia 76ers center Dwight Howard watches as a fan who ran onto the court is restrained by security personnel on Monday in Washington. 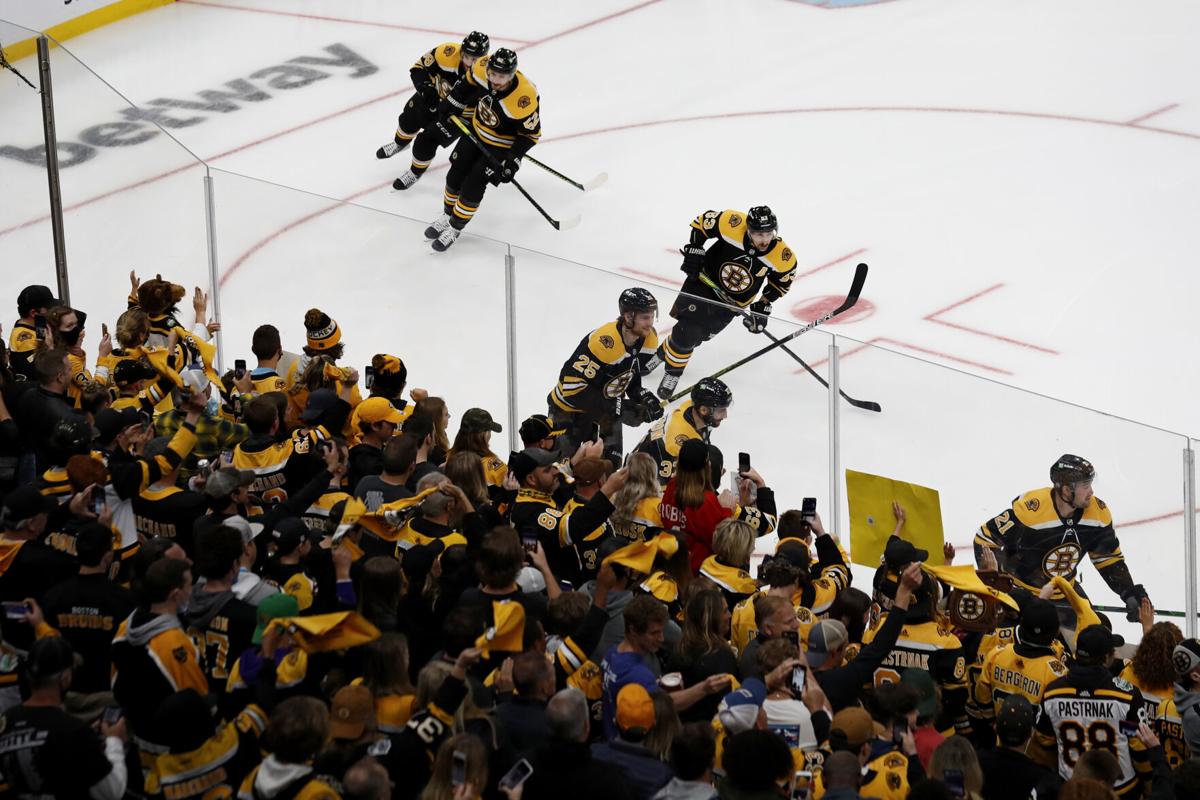 Fans fill the seats as the Boston Bruins warm-up prior to Game 2 of an NHL playoff game against the New York Islanders Monday in Boston.

In the ninth inning of the Houston Astros’ game with the Los Angeles Dodgers last Wednesday night, ESPN’s Tim Kurkijan recognized the difference.

You said a mouthful there, Timmy. Over the din, even.

In recent weeks, turnstiles at ballparks and arenas all over the country have clicked with far more frequency. It’s been a beautiful thing to see (and hear). As COVID-19 case numbers have plummeted in the wake of a nationwide vaccine rollout, teams are throwing open the gates again. Fans are filling the seats, cheering and screaming and booing and cussing. At many venues, capacity has returned to 100 percent.

If an (NBA) tree falls into Christian Wood and nobody is around to hear it, does it make a sound?

Well, sure. It even echoes. But you’d rather it not.

Turns out that, yes, you can absolutely stage sporting events with no fans in attendance. But it’s not the same. The games aren’t as good without real-life butts in the seats.

For the better part of a year, we endured a near fan-less sporting environment. Pro and college teams tapped into their creative juices to try to fill the void. They pumped in recorded crowd noise. They filled the stands with cardboard cutouts. They gave fans at home the option to log in via video screens.

Nice try, but it all felt so artificial. So empty. (There is a lesson in there about virtual interaction, methinks.)

It wasn’t even close to the real thing. Empty gyms and ball fields are for practices, not games. So if you ever got the sense during those fan-less COVID-era contests that you were watching a glorified practice, you weren’t alone. There’s just something eerie about taking in a basketball game where the only sound you hear is the squeaking of sneakers across the hardwood. Same goes for football, baseball and the rest.

Clearly, it makes a difference to the players. You can spot a noticeable rise in the energy level of the athletes when people are in the seats. In recent days, several NBA and Major League Baseball players and coaches have expressed genuine appreciation for the restoration of something resembling normalcy in the bleachers.

Even in wishy-washy Los Angeles. For instance, when the L.A. Lakers opened up the Staples Center to 7,500 people for Game 3 of their series against the Phoenix Suns, it actually marked the Lakers’ first playoff home game with fans since LeBron James and Anthony Davis had joined the team. (They didn’t make the playoffs in LeBron’s first year in L.A. in 2019, and during the 2020 championship campaign the NBA utilized a bubble environment in Orlando.)

“It was this group’s first opportunity to play a playoff game in front of great fans,” said Lakers coach Frank Vogel, perhaps playing fast and loose with the word great. “We were really yearning for full capacity or close to full capacity, but to be able to deliver a victory, there’s nothing like winning in the playoffs for sports fans. And for these guys to be able to deliver that, it’s a great source of pride.”

Now, some of these fans may have been cooped up in quarantine a little too long. In some arenas, a return to normalcy has led to a return to lunacy. So far in the NBA playoffs, we’ve seen a spectator spit on Hawks guard Trae Young, another dump a cup of popcorn on the Wizards’ Russell Westbrook, and yet another chuck a water bottle at the Nets’ Kyrie Irving. The latest crazed fan incident (at least for now) arrived Monday when a fan in Washington interrupted the Wizards-Sixers game by darting onto the court during the action.

“You can tell those people have been in captivity for the last year, year and change, right?” Wizards center Robin Lopez said. “It’s kind of wild to see the liberties people are taking.”

There’s always at least one knucklehead ruining it for the rest of us, isn’t there? To those fanatics (in every sense of the word), I say: Grow up. Be civilized. Act like an adult. Have some common sense. The price of your ticket does not grant you the right to say or do whatever comes to mind. Kudos to the NBA for taking action and banning the offending perpetrators from ever re-entering those arenas.

It’s not just the NBA fans, though. Videos of MLB fans fighting in the stands have surfaced in recent days. Just wait until we reach football season. Even staid, buttoned-up golf isn’t immune. It was something of a scary scene at the PGA Championship a week ago when a raucous gallery nearly engulfed Phil Mickelson on his walkup to the 18th green.

Brooks Koepka understood the fans’ excitement, but thought the PGA’s security should have been more stringent.

So, go to the games and go crazy, but don’t go crazy. Know what I mean? It may seem like a fine line, but really it isn’t. Athletic venues are marked with visible lines, decorated with chalk or paint and sometimes partitioned off with barriers. As a fan, you’re not supposed to cross those lines. (Neither is your saliva, nor your concessions.)

Just because they’ve opened the gates doesn’t mean they can’t lock them back up again. Let me put it in a way fans can understand, since I’ve heard many of them cry this when a baseball slugger flips a bat or a football running back shakes his tail feathers in the end zone.

Baylor obviously likes the taste of Sugar. So much that the Bears are headed to the Sugar Bowl for the second time in three seasons.

Philadelphia 76ers center Dwight Howard watches as a fan who ran onto the court is restrained by security personnel on Monday in Washington.

Fans fill the seats as the Boston Bruins warm-up prior to Game 2 of an NHL playoff game against the New York Islanders Monday in Boston.