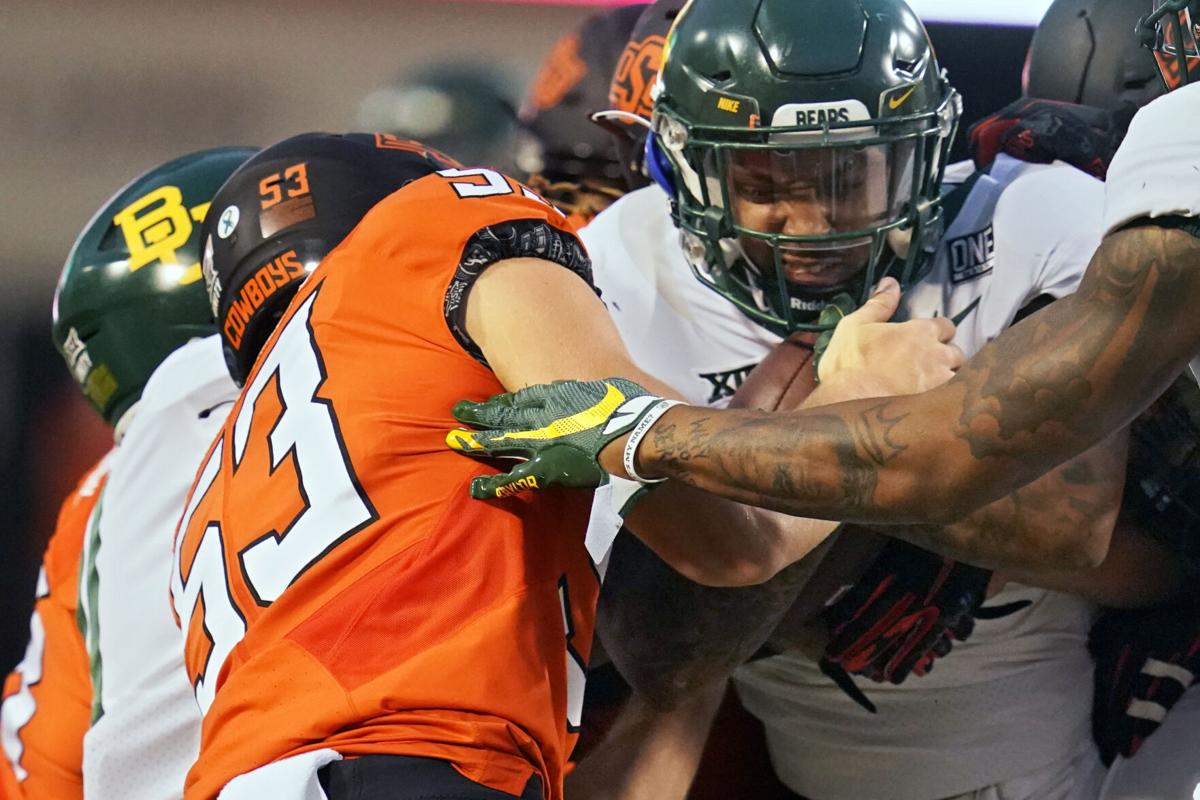 Baylor running back Trestan Ebner (1) is stopped by Oklahoma State's Matt Hembrugh (53) in the Cowboys' 24-14 win Saturday in Stillwater. Ebner netted no yards on eight carries. 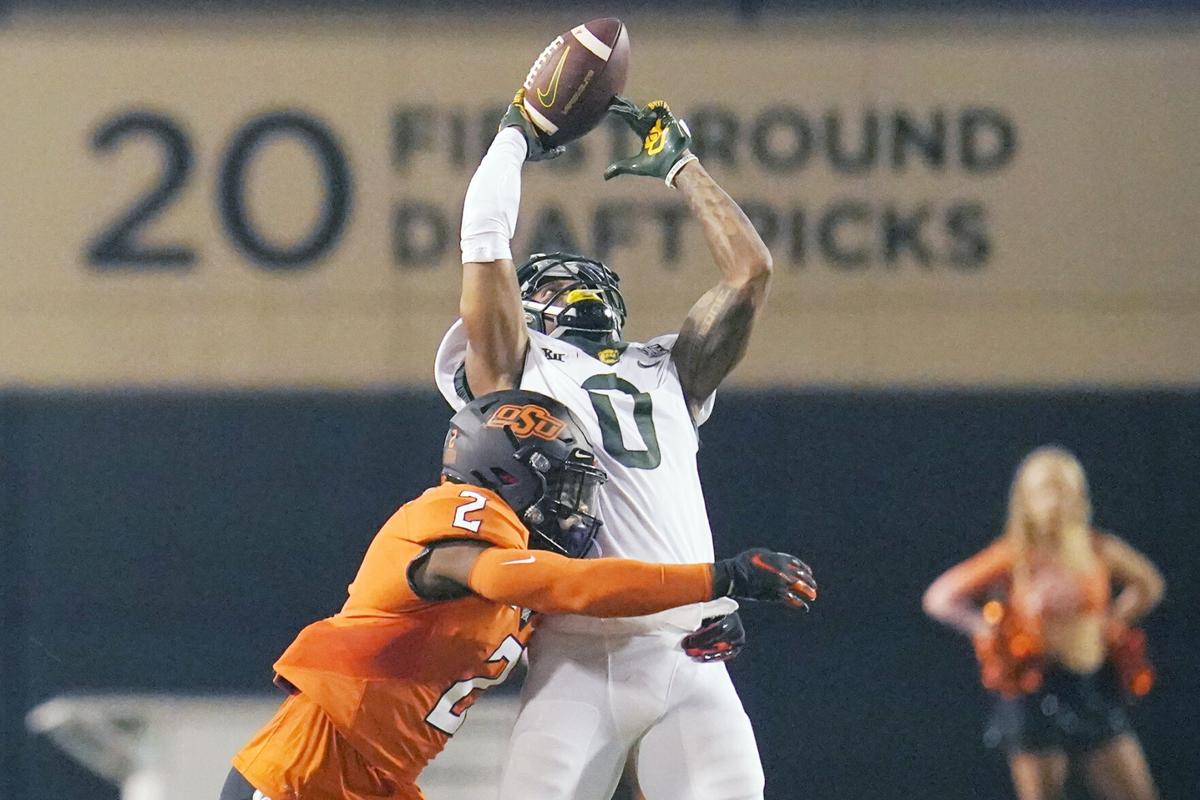 Baylor wide receiver R.J. Sneed (0) can't hold on to a pass as he is hit by Oklahoma State safety Tanner McCalister (2) in the Cowboys' 24-14 win in Stillwater.

At first glimpse, Baylor’s offense was a frightening sight.

The Bears ranked among the most powerful attacks in the country through the first three games, averaging 558.7 yards and 46.7 points. With Abram Smith and Trestan Ebner leading the way, Baylor’s running game was hammering defenses to a tune of 321.3 yards rushing per game.

But Baylor’s wide-zone attack has looked anything but dominating in the last two games against Iowa State and Oklahoma State, averaging 281 yards total offense and 22.5 points.

Struggles in the running game have been most prominent as the Bears have averaged 112.5 yards and 3.6 yards per carry in the last two games.

In Baylor’s 24-14 loss Saturday night in Stillwater, Oklahoma State loaded the box up front with linemen, linebackers and safeties. Except for Smith’s 55-yard touchdown run in the third quarter, Baylor’s running game was nearly at a standstill.

Now 4-1, the Bears will focus on producing a much more effective running game against West Virginia at 11 a.m. Saturday at McLane Stadium.

“We have to establish the run,” said Baylor coach Dave Aranda. “If we’re getting safeties that are in the box as much as they were on Saturday, we have to be more effective at cracking them. Then we’re also going to have to complete balls down the field to stretch defenses where they don’t have seven, nine, 10-man fronts.”

Aranda said Oklahoma State's defense was successful in trying to make the Bears beat them on the perimeter. With the Cowboys putting a lot of defensive speed on the field, the Bears had difficulty getting around them for yardage, especially Ebner with eight carries for no yards.

“I think it’s all very fixable,” Aranda said. “He (OSU defensive coordinator Jim Knowles) put a lot of people in the box and forced us to win on the outside and on the perimeter. And we failed to do that.”

But for the first time this season, Bohanon didn’t complete more than 60 percent of his passes as he went 13 for 27 for 173 yards and no touchdowns.

“I think there are some structural similarities,” Aranda said. “We use the term ‘spinner’ for three-man fronts with a linebacker, defensive end-type body, right at kind of the heel line of the defensive line in one of the B gaps, and stunts and pressures that can come off those looks. So they’re similar from that perspective. I think they’re also similar in that they’re very multiple. They’re not a bend but don’t break defense. They’re more of an attacking brand.”

While the Baylor players will try to produce at a higher level, the coaching staff will try to communicate better and get the plays in quicker than they did against Oklahoma State in a hostile environment at Boone Pickens Stadium.

“I think as a coaching staff, myself, I take responsibility for that,” Aranda said. “That’s something we should be much better at. I think the crowd noise late in the game, the pressure, the time of the game, the time that was left, the score, I think all of those things affected it.

“We would be calling guys, guys wouldn’t hear us. ‘Hey, this is the call.’ ‘Are you sure that’s the call?’ And all that was happening. I think pressure creates abnormal behavior. So we were able to be in a pressure situation, really for the first time, in an away environment like that.”

Aranda wants to see his team playing more efficiently as it hits the midway point of the season.

They’re doing a lot of good things, especially defensively as the Bears intercepted three passes against the Cowboys that should have led to more points.

Baylor’s special teams have been a bright spot, highlighted by Trestan Ebner’s 98-yard kickoff return for a touchdown in a 31-29 win over then-No. 14 Iowa State two weeks ago.

Punter Issac Power has been on a roll, averaging 54.5 yards on four punts against Iowa State and 42 yards on nine punts against Oklahoma State, including several that pinned the Cowboys deep in their own territory.

But Aranda wants to see the Bears play more consistently and be at their best at critical points in the game.

“Well I think it’s frustrating for me when you want to win with character,” Aranda said. “When you really care about winning is really important to me, but how you win is more so, and to make that a real central part of what we want to be about and what we want to display on and off the field, and then to make that almost a daily point, and to have that not show up is frustrating.

“Usually you emphasize something and you get it. We’re talking about staff-wise ways we can be more effective in that area and be able to get a complete buy-in to where we can be better with that. I just feel every game is going to be back and forth, every game is going to be a fight in this league, and rightfully so. We’re going to have our hands full playing one opponent. We’ve been playing two here for a while.”

Aranda is hopeful that all-Big 12 linebacker Terrel Bernard will return against the Mountaineers after missing the Oklahoma State game with a knee injury. Cornerback Kalon Barnes also missed the last game.

“It all points to (Bernard) coming back,” Aranda said. “We’re aiming to have (Barnes) available for this Saturday. I think these next two days, Monday and Tuesday, are going to be a big tell on that. He’s getting some work done on his legs to see if he can be available for us.”

Baylor coach Dave Aranda never likes to look too far ahead, but October couldn’t be more favorable: The Bears begin a 3-game homestand that isn't easy, but can go a long way toward a successful season if they take advantage of it.

Baylor running back Trestan Ebner (1) is stopped by Oklahoma State's Matt Hembrugh (53) in the Cowboys' 24-14 win Saturday in Stillwater. Ebner netted no yards on eight carries.

Baylor wide receiver R.J. Sneed (0) can't hold on to a pass as he is hit by Oklahoma State safety Tanner McCalister (2) in the Cowboys' 24-14 win in Stillwater.