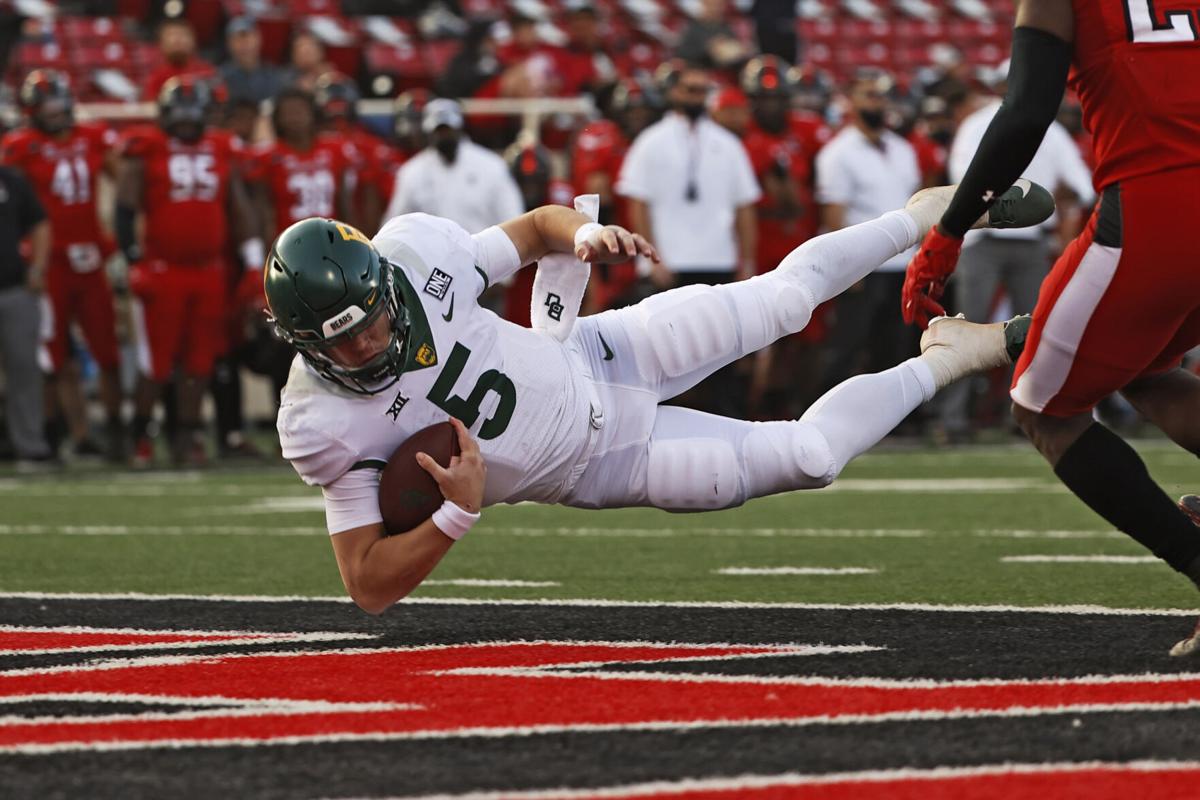 Baylor’s Charlie Brewer (5) scores a touchdown during the second half of an NCAA college football game against Texas Tech on Saturday in Lubbock. 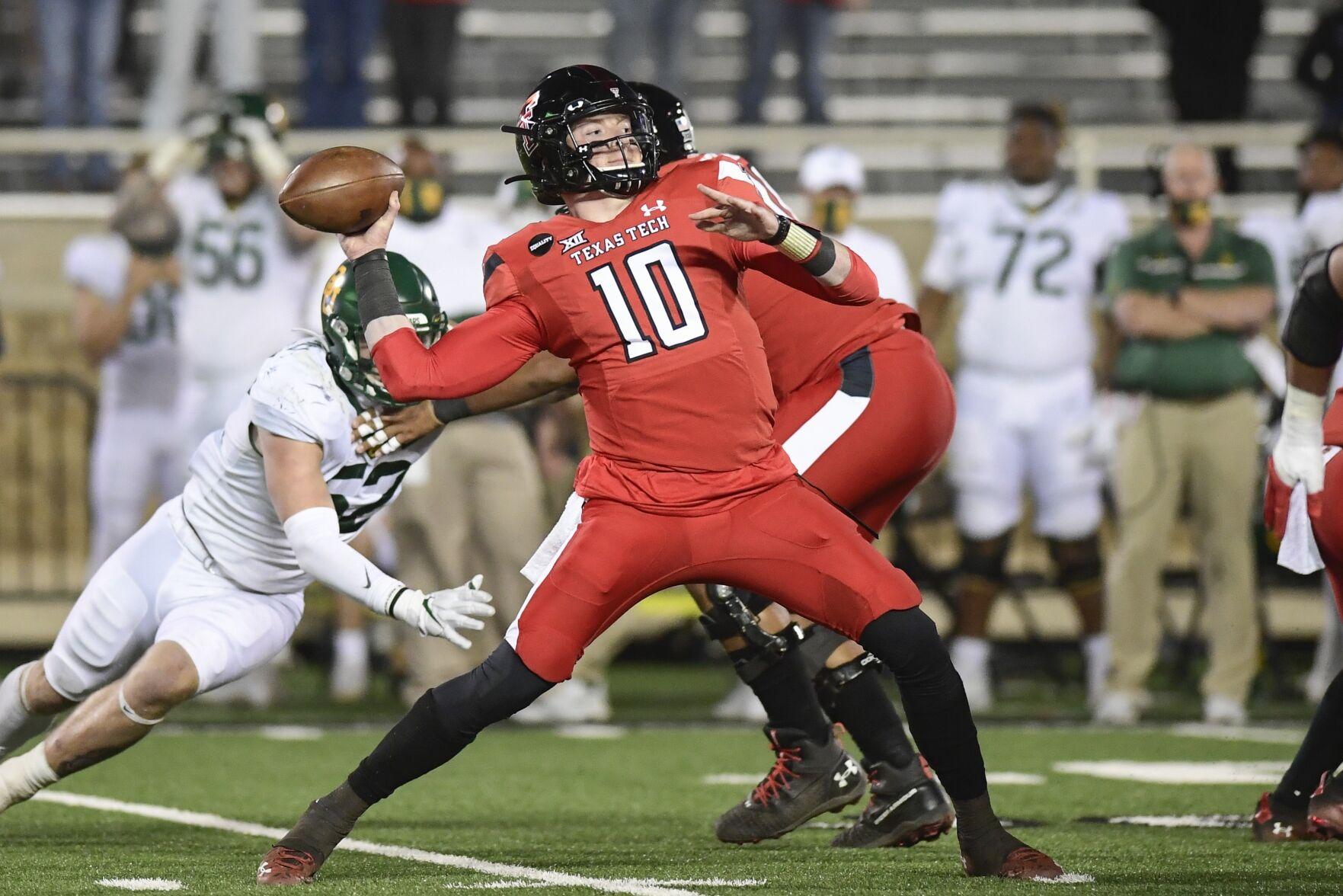 Texas Tech quarterback Alan Bowman (10) throws against Baylor in the second half of an NCAA college football game in Lubbock on Saturday.

After starting quarterback Brad Goebel went down with an injury, Joe stepped in and helped Baylor pull off a 21-15 win.

“I wasn’t supposed to play,” Joe said. “I was third on the depth chart. I just remember Brad getting hurt and everyone yelling my name. I wasn’t sure where my helmet was. Everything after that was a blur. But it was a great start to my career and one that I’ll never forget.”

That game 30 years ago was Baylor’s last win in Lubbock.

Playing the Red Raiders on their own turf for the first time since 2008 after shifting the series to the Metroplex, the Bears were on the verge of breaking a nine-game losing streak in Lubbock on a dusty, windy Saturday afternoon.

They led 23-12 heading into the fourth quarter, but watched the Red Raiders rally as Jonathan Garibay hit a 25-yard field goal as time expired for a 24-23 win at Jones AT&T Stadium.

It was a devastating loss for the Bears, who have dropped five straight games following their 47-14 season opening win over Kansas on Sept. 26.

If it wasn’t for the hopeless Jayhawks, the Bears would be occupying the Big 12 cellar a year after they reached the Big 12 championship game and played in the Sugar Bowl.

But as desperate as they are for a win, they’ve shown some good signs in the past two road games.

On Nov. 7, Baylor’s upset bid of Big 12-leading Iowa State fell short when Charlie Brewer’s pass was intercepted in the end zone with 57 seconds remaining as the Cyclones held on for a 38-31 win.

The Bears did a lot of good things on Saturday to put themselves on the cusp of a big road win before the Red Raiders drove 79 yards in the last 2:14 to pull off the one-point decision.

The Bears will have two weeks to try to improve different areas of their game before hosting Kansas State on Nov. 28 at McLane Stadium.

“I think there were a lot of positives,” said first-year Baylor coach Dave Aranda. “We talked about starting fast this week, practiced that way, and tried to connect the fast start with finishing strong. We still have some work to do in that part.”

With all-Big 12 linebacker Terrel Bernard out for the season with a shoulder injury, some other Baylor defenders knew they had to step up. Junior linebacker-safety Jalen Pitre did just that as he perfectly read Alan Bowman’s pass and returned it for a 26-yard first-quarter touchdown.

It marked the second straight game that Pitre returned an interception for a touchdown following his 30-yard pick-and-score against the Cyclones.

Early in the third quarter, linebacker Dillon Doyle pounced on a Texas Tech fumble at the Red Raiders’ 34 to set up Brewer’s eight-yard touchdown run.

“Abram and Bryson Jackson did an awesome job filling in for Terrel,” Doyle said. “It was really cool to see them take that step maturity-wise and just as football players. They amped up the preparation and I think you saw that on the field. Abram had some really big plays that we’ve seen from him in practice and we were proud to see him make those on the field.”

Coming into the game averaging a Big 12-low 88 yards rushing per game, Baylor was without three of its top running backs. Craig “Sqwirl” Williams went out with a season-ending shoulder injury against Iowa State while John Lovett missed his second straight game with an injury. Trestan Ebner played early against the Red Raiders before leaving the game with muscle tightness.

Baylor turned to a pair of freshmen in the backfield. Making his first start, Qualan Jones rushed for 86 yards on 21 carries while Taye McWilliams picked up 31 yards on six carries. With Brewer rushing for 76 yards, the Bears finished with 207 yards rushing.

“I thought for both of them (Jones and McWilliams), the most playing time they’ve ever had, their ability to attack, to help us in our effort, was very good,” Aranda said. “It’s something to build upon. But I think there’s a fair amount that we can improve on. They’re at their best when they put their foot on the ground and go north and south. I think there was some going east and west.”

Due to COVID-19, Baylor’s season was shortened from 12 to nine games. Now the Bears are entering their final three games with the Nov. 28 Kansas State game followed by a Dec. 5 date against Oklahoma in Norman and a rescheduled Dec. 12 game against Oklahoma State at McLane Stadium.

With a 1-5 record, the Bears have no chance for a winning season. But if they can learn how to finish as strong as they’ve been starting games, they can give themselves a shot to win.

“We’ve put a lot of emphasis the last two weeks on starting fast, and I think we’ve done that,” Doyle said. “The next part of that is finishing strong, and that’s a step in the process. We’re proud of the team that we’ve put together, and we’re just going to stay together and keep fighting as a team these last three weeks.”

Next one up: Next wave of Lady Bears ascending to new spots

For elite basketball programs, the late fall brings an additional red-letter event on the holiday calendar.

After its first three games were canceled due to COVID-19, the No. 2 Baylor men's basketball team hopes to hit the jackpot in Las Vegas with t…

LAS VEGAS — With the way Baylor’s early season schedule has fallen apart this week, the biggest question it faced was when it would finally ge…

Despite COVID-19 spiking across the country, Baylor is on a real scheduling roll.

It’s been more than two months since Baylor last won a football game, so forgive the Bears if they’re anxious to play Kansas State on Saturday…

The No. 2 Baylor men’s basketball team will not play in the Empire Classic after season-opening opponent Arizona State reportedly planned to w…

Baylor’s Charlie Brewer (5) scores a touchdown during the second half of an NCAA college football game against Texas Tech on Saturday in Lubbock.

Texas Tech quarterback Alan Bowman (10) throws against Baylor in the second half of an NCAA college football game in Lubbock on Saturday.