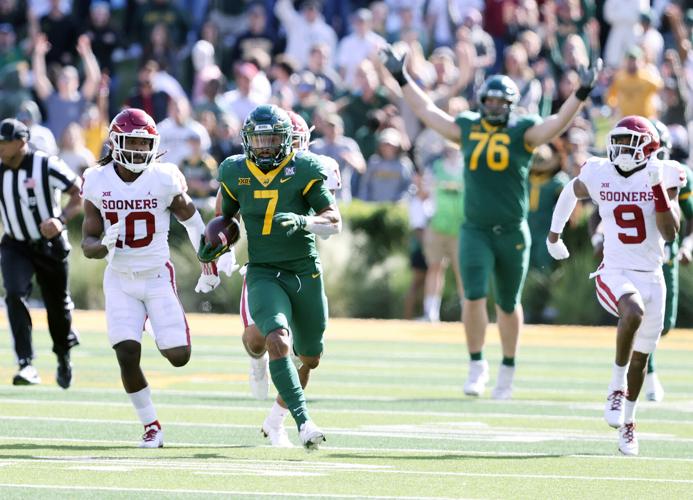 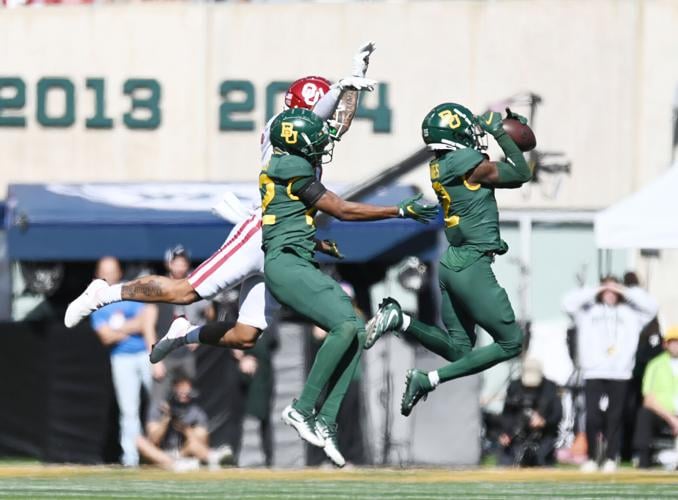 With their riveting 27-14 win over Oklahoma, the No. 11 Bears can reach the Dec. 4 Big 12 championship game at AT&T Stadium. But they’ll likely need some help.

No. 12 Oklahoma and No. 9 Oklahoma State are tied for the Big 12 lead at 6-1 while Baylor is third at 5-2. The Bears travel to Kansas State on Saturday before closing the regular season with a home date against Texas Tech on Nov. 27.

Brice Cherry: Bears carried fire, now they must hold onto it

Grant Teaff once wrote a book entitled “I Believe.” On the day after the Baylor coaching legend’s 88th birthday, this current batch of Bears s…

If the Bears win their last two games, they’ll need to root for the Cowboys to beat the Sooners. That would knock Oklahoma out of the Big 12 championship game picture with losses to both Oklahoma State and Baylor. If Oklahoma State beats Texas Tech and loses to Oklahoma, the Cowboys would still make the Big 12 champi-onship game since they beat the Bears, 24-14, on Oct. 2 in Stillwater.

After Baylor fans stormed the field Saturday afternoon, Oklahoma coach Lincoln Riley was irked that Baylor coach Dave Aranda called a time out with three seconds remaining to have Isaiah Hankins kick a 32-yard field goal to give the Bears a 13-point differential.

But Aranda wanted to kick the field goal to give Baylor an edge in point differential if needed to reach the Big 12 championship game since the Bears lost to Oklahoma State by 10.

Aranda looked at the tiebreaking procedures early in the week before the Oklahoma game and wanted to be prepared for all scenarios. Baylor quarterback Gerry Bohanon wasn’t surprised that Aranda had all his bases covered.

“To be honest with you, that’s Coach Aranda from all aspects,” Bohanon said. “He’s always just on point. You can never really question what he does because it always makes sense and there’s always a reason behind it. And to think in that split-second, we’ve got to do this for this. The time and situation, he’s always thinking big picture. He’s going to make the best decision possible. Kudos to him.”

Oklahoma knows better than anybody that winning in November translates into Big 12 championship game berths and College Football Playoff appearances.

Of course, the Bears have to win their last two games to have a legitimate shot to reach the Big 12 title game. They’ll need to prove they can beat a hot Kansas State team in Manhattan after losing their last two road games to Oklahoma State and TCU. With Saturday’s 34-17 win over West Virginia, the Wildcats (7-3, 4-3) have won four straight games.

Then the Bears will have to beat the Red Raiders at McLane Stadium, which could be difficult after Baylor outside linebackers coach Joey McGuire became Texas Tech’s head coach last Monday.

If the Bears continue to play great defense like they did against Oklahoma, they’ll have a shot to win any game. The Bears limited an offense that was averaging 477 yards and 42.7 points per game to a season-low 260 yards and two touchdowns.

The Bears held the Sooners to 78 yards rushing and put a great deal of pressure on Oklahoma starting quarterback Caleb Williams by sacking him three times and sacking Spencer Rattler twice after he entered the game late in the third quarter.

Pressured by Baylor’s pass rush, Williams threw interceptions to cornerbacks Kalon Barnes and Al Walcott. The Baylor defensive line’s ability to stop the run and pressure the quarterback has made a difference in winning the last four home games.

“I think that our ability to stop the run on defense has been a game-changer for us,” Aranda said. “Initially, at the start of the year, we had to stop the run with eight-man fronts or run stunts or run blitzes or run coverages. And we struggled to defend it. It kind of goes back to, it’s not the scheme, it’s the execution, it’s the energy guys bring.”

Saturday's victory was Baylor’s first win over a team ranked in the Top 5 of the Associated Press poll since the Bears defeated then-No. 4 Oklahoma State, 35-25, in Stillwater with Bryce Petty.

Baylor’s ground game led by Abram Smith has also been a major factor in fashioning the Bears’ 8-2 record. With Smith rushing for 148 yards on 20 carries and Bohanon picking up 107 yards on nine carries and scoring two touchdowns, the Bears gashed Oklahoma’s defense for 296 rushing yards after it had previously allowed just 111 yards per game.

Baylor’s running game has worn down opposing defenses as the Bears clearly showed against the Sooners when they drove 80 yards on 11 plays and took 5:50 off the clock in the fourth quarter to open up a 24-7 lead with 2:26 remaining.

“I think playing us, Baylor football our standard, at some point we see every opponent wear down,” Bohanon said. “We practice so hard. When we returned, looking at the other guys on the other side it’s like keep going. We play for each other and motivate each other.”

Aranda expects Baylor to rise up after dramatic loss to TCU

When the Baylor football players walked into Sunday’s team meeting, some still couldn’t get Saturday’s dramatic ending out of their heads.

Here's where to find Bears broadcasts for football, basketball and more.

AUSTIN — The visiting interview room at Darrell K. Royal-Texas Memorial Stadium is located in the bowels of the venue, just adjacent to that t…

How they match up: Baylor vs. Texas

Do Baylor fans believe in evolution? They should.

Who has scored the most World Cup goals of all time?

Who has scored the most World Cup goals of all time?

Some prep coaches opt to pray, while others punt

Some prep coaches opt to pray, while others punt