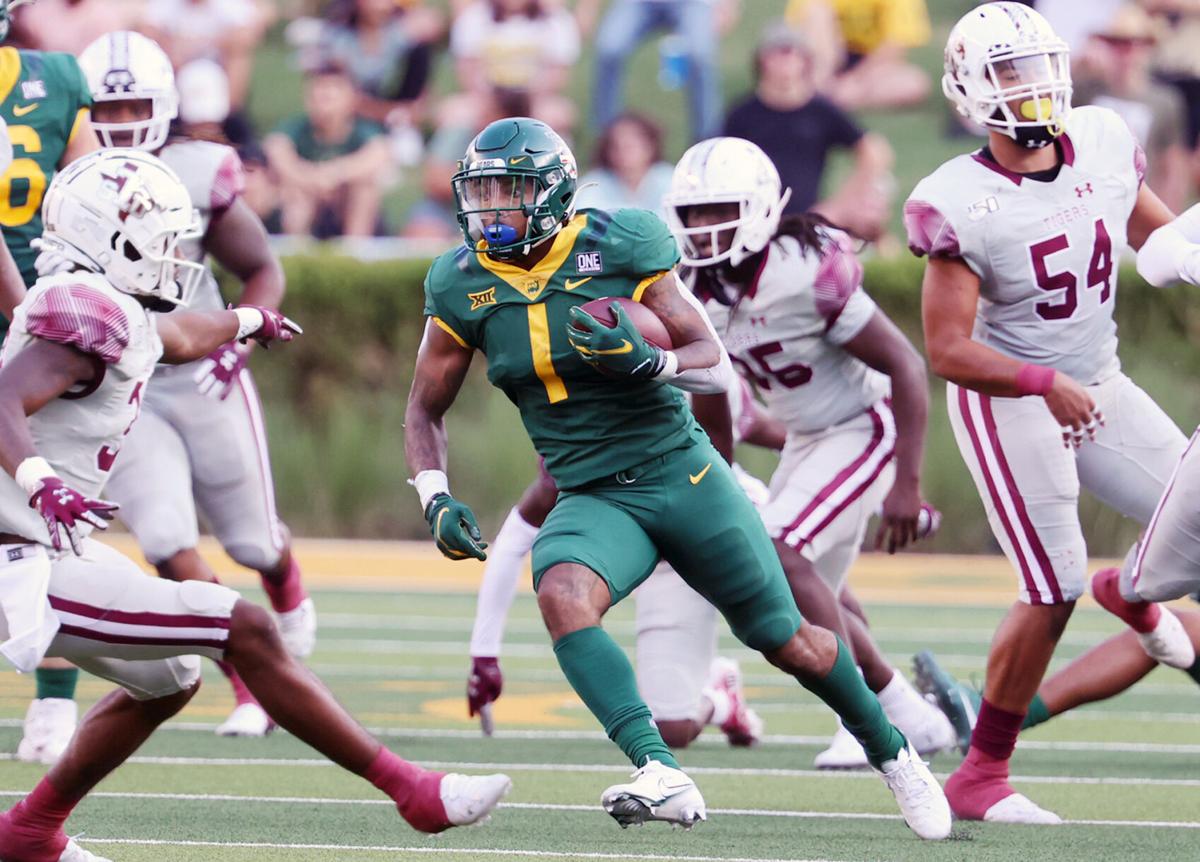 Baylor running back Trestan Ebner has topped 100 yards rushing in each of the Bears’ first two games for an offense that is more than tripling last year’s rushing output, on average. 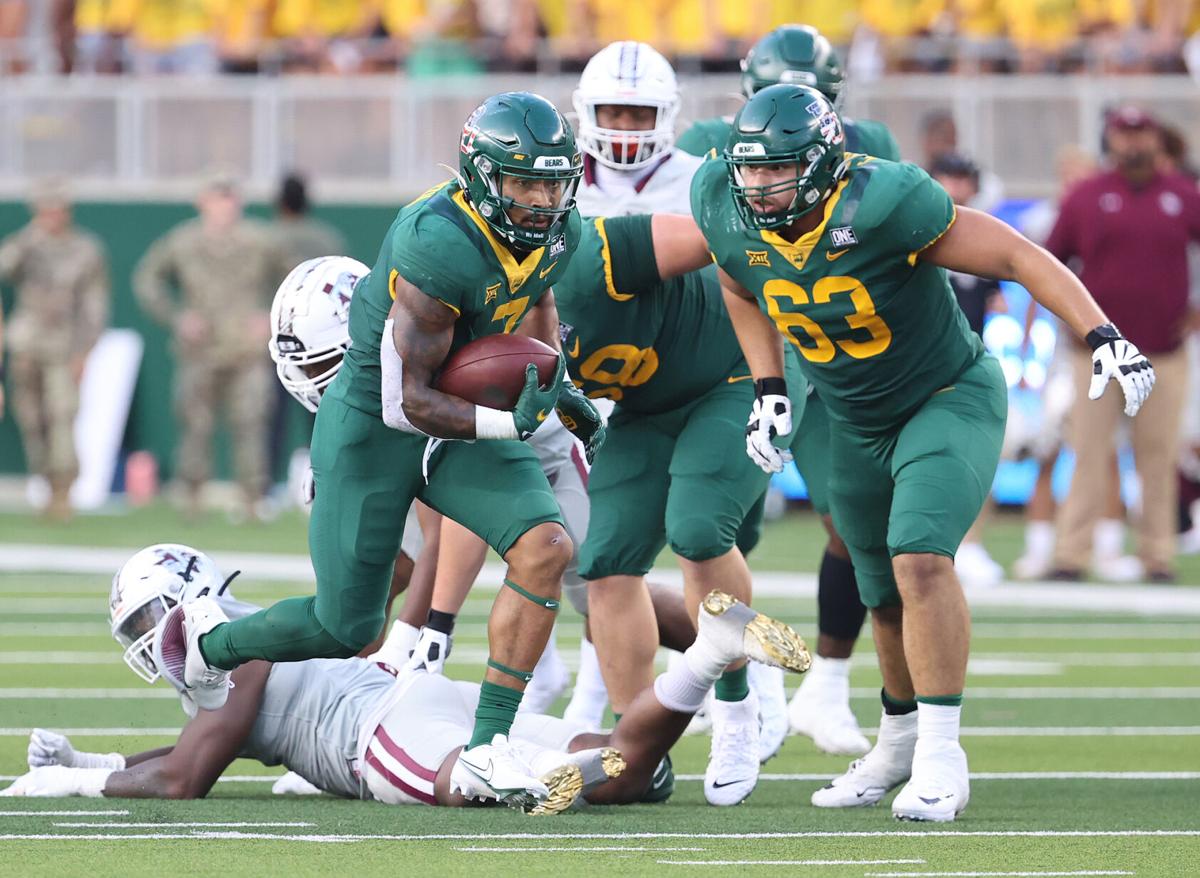 Baylor running back Abram Smith has 31 carries for 244 yards, an average of 7.9 yards per tote, through the Bears' first two wins. 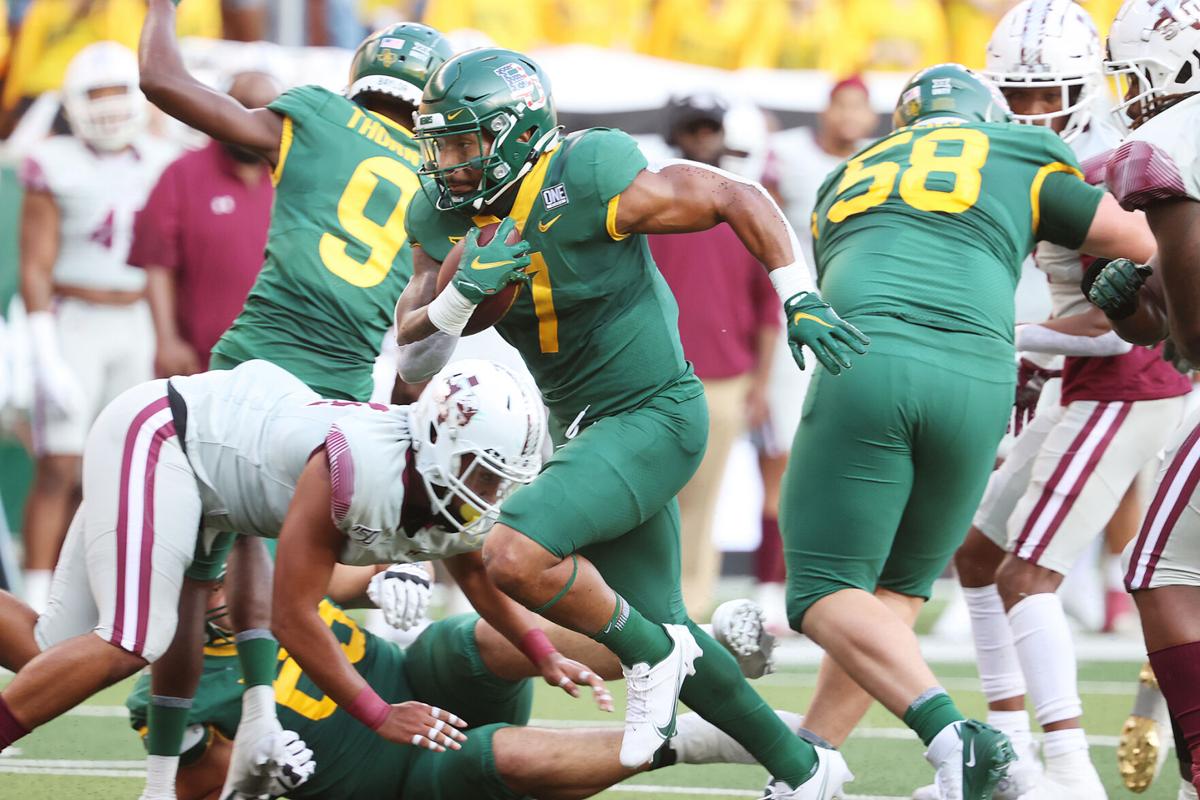 Baylor’s Abram Smith and his fellow backs have benefited from improved play up front on the line, a group that Dave Aranda said is playing with a renewed sense of confidence.

Maybe Jeff Grimes could have a second career as a plastic surgeon. The new Baylor offensive coordinator has overseen one of the more dramatic makeovers one could imagine.

Certainly, Baylor has adapted nicely to Grimes and his wide zone scheme through the first two games. When asked what one thing has made the biggest difference in the turnaround of the Bears’ running game, head coach Dave Aranda first acknowledged that it was a tough question.

But when he stripped it down to the essence, he served up a KISS. As in “Keep It Simple, Stupid.”

“Simplicity, if I had to choose one. I think simple is sophisticated,” Aranda said. “I think sometimes things get complex because the level of understanding isn’t there and things aren’t eliminated that are wasteful. There’s not that clear vision of this is who we are and this is what we do, this is what we need.”

Early in the season Aranda’s chief objective for his team was to start carving out a clear identity. He wanted the Bears to know who they are, to know what they do best. Offensively, that direction has crystallized, he said. The Bears, under Grimes, are a “wide zone, play-action, shot team.”

And a productive one at that. Remember, the 2020 Bears appeared to be stuck in the school pickup lane, traveling nowhere. Baylor averaged a meager 90.3 rushing yards per game last season. Not only did that rank 123rd out of 127 FBS teams, but it marked Baylor’s lowest season output in 13 years and its fourth-lowest on record since the program first started tracking such statistics in 1945.

In 2021, the Bears have shown they’re free from the traffic snarl and they’re out zipping around, doing donuts, having fun again. Granted, it’s early, but Baylor has more than tripled its rushing output on a per-game average, putting up 331.5 yards per game in its first two wins. That ranks first in the Big 12 and fifth in the country.

Every football coach alive has “It Starts Up Front” tattooed on their frontal lobes. And it’s true. Baylor’s offensive line unit looks like a completely different group thus far this season, even though many of the same names and faces fill the depth chart. Aranda gave credit to new O-line coach Eric Mateos, who like Grimes came over from BYU, for instilling a new level of conviction and belief in the linemen.

“Confidence is such an important and almost overlooked thing,” Aranda said. “For someone to be wherever they’re at and want to achieve more and be more and become something they’re not takes confidence. You step outside of your comfort zone and you have to trust the aid that’s helping you and walking you to where you want to get to.”

Baylor’s linemen have taken the brunt of any Bear-directed criticism over the past couple of years, but they’ve tried to ignore such barbs. Starting left guard Xavier Newman-Johnson called it “rat poison.” By muzzling the negativity, they’ve been able to make some positive progress, he said.

“I just think, honestly, everybody got in our heads of how we were last year and what we could be,” Newman-Johnson said. “I would just say as a group we all came together and put our heads down, and just worked and kept on working.”

It would be prudent to not get carried away with Baylor’s early rush to glory. Texas State and Texas Southern should end up as the two worst teams on the Bears’ schedule, and Kansas — this week’s opponent in the Big 12 opener — might not offer much more resistance than that duo.

Nevertheless, it wouldn’t be fair to dismiss Baylor’s rushing success entirely, either. Grimes directed the nation’s sixth-ranked offense at BYU in 2020. The Cougars put up 2,281 rushing yards and nearly 4,000 passing in 12 games, and their 7.84 yards-per-play average topped the country.

There’s also a reason why the wide zone has remained one of the more popular schemes in the NFL since the days Mike Shanahan stalked the sidelines for the Denver Broncos in the late 1990s. When executed properly, it works.

“The wide zone play is one that really has probably been the most consistent play in the NFL for the last 20 to 30 years, 25 years, somewhere in there,” Grimes said during Baylor’s spring drills. “There are reasons for that. Some of which, it is a play that is very versatile. You can use it with a number of different formations and personnel groups. It’s something that is very consistent, allows you to stay on schedule. It’s a play that shouldn’t allow for a lot of negative yardage plays, so it keeps you on schedule as an offense and as a playcaller.”

Obviously Baylor’s running backs have become born-again converts to Grimes’ wide zone attack. Trestan Ebner and Abram Smith topped 100 yards rushing in both of Baylor’s first two games against the Bobcats and Tigers, and sophomore Taye McWilliams joined them in that club in the Texas Southern game with six carries for 102 yards and a touchdown in garbage time.

The offense also might be a tailor-made fit for new quarterback Gerry Bohanon. In his limited snaps as a Bear, he’s proven himself as a hard-nosed, rugged runner. He rushed for a pair of touchdowns last weekend against Texas Southern, the first on a 7-yard designed play and the second on a 10-yard scramble where he tucked and ran after not seeing anyone open.

Unlike a lot of quarterbacks, Bohanon doesn’t shy away from a little contact.

After opening the 2020 season with 43 carries for 203 yards and three touchdowns against Kansas, Baylor strayed in the running game thereafter. The Bears rushed as many as 40 times only once more all season.

Already this year, they’ve displayed a deeper commitment to the run. They had 45 carries against Texas State and 43 more against Texas Southern. It’s a complete shift in philosophy. Aranda said that the 2021 Bears have several formations that will produce a running play 80-90 percent of the time.

“There’s always the ability to play off that when needed, but someone’s got to stop those numbers first,” Aranda said. “They’re going to have to make an adjustment to do that, and that’s going to open up (the pass). If you’re doing this to stop the fastball, it’s going to open up the curve and the change that are always there, you know what I mean? But it starts with being simple first, and I feel they’ve done a great job with that.”

The Trib's Brice Cherry and John Werner wonder if the rebuilding at Kansas will ever end, and they offer up some of their fondest memories of their favorite Jayhawk fan, the late Kristin Hoppa, former Trib crime reporter. Check it out at WacoTrib.com or wherever you download your podcasts.

Who has the edge in the NL Wildcard race?

Baylor running back Trestan Ebner has topped 100 yards rushing in each of the Bears’ first two games for an offense that is more than tripling last year’s rushing output, on average.

Baylor running back Abram Smith has 31 carries for 244 yards, an average of 7.9 yards per tote, through the Bears' first two wins.

Baylor’s Abram Smith and his fellow backs have benefited from improved play up front on the line, a group that Dave Aranda said is playing with a renewed sense of confidence.