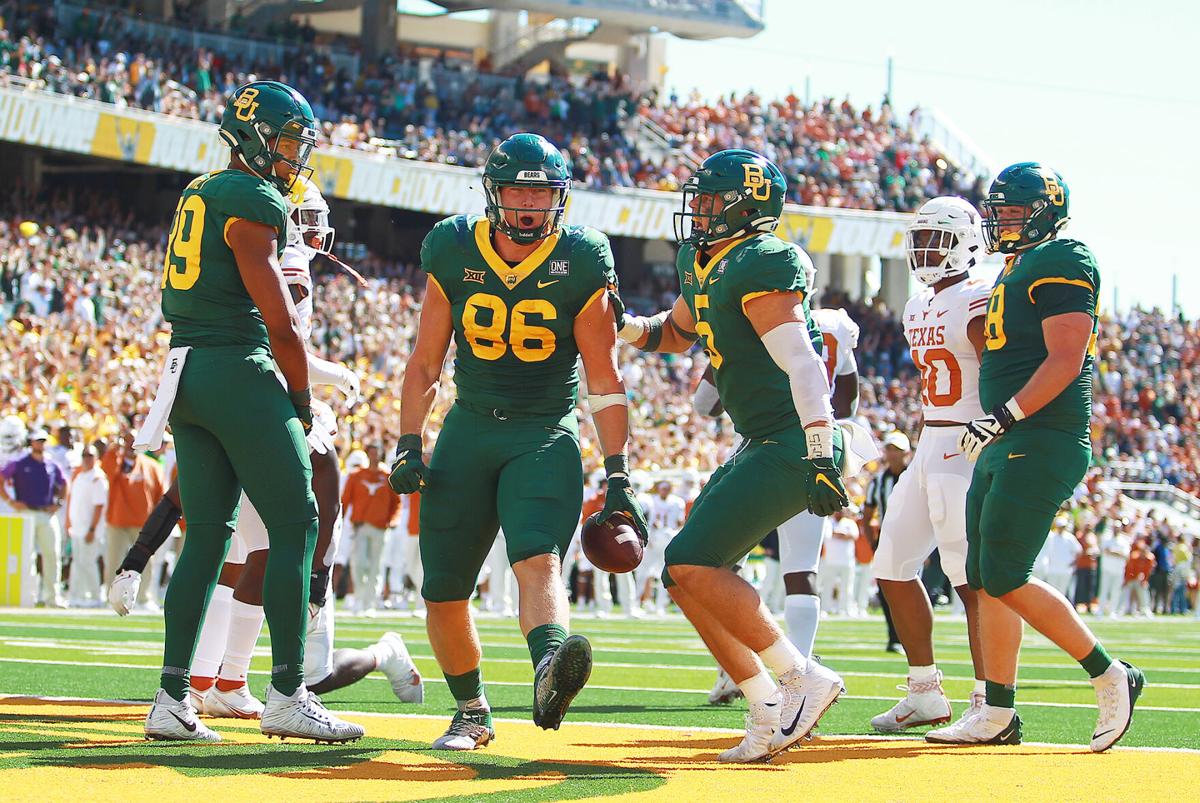 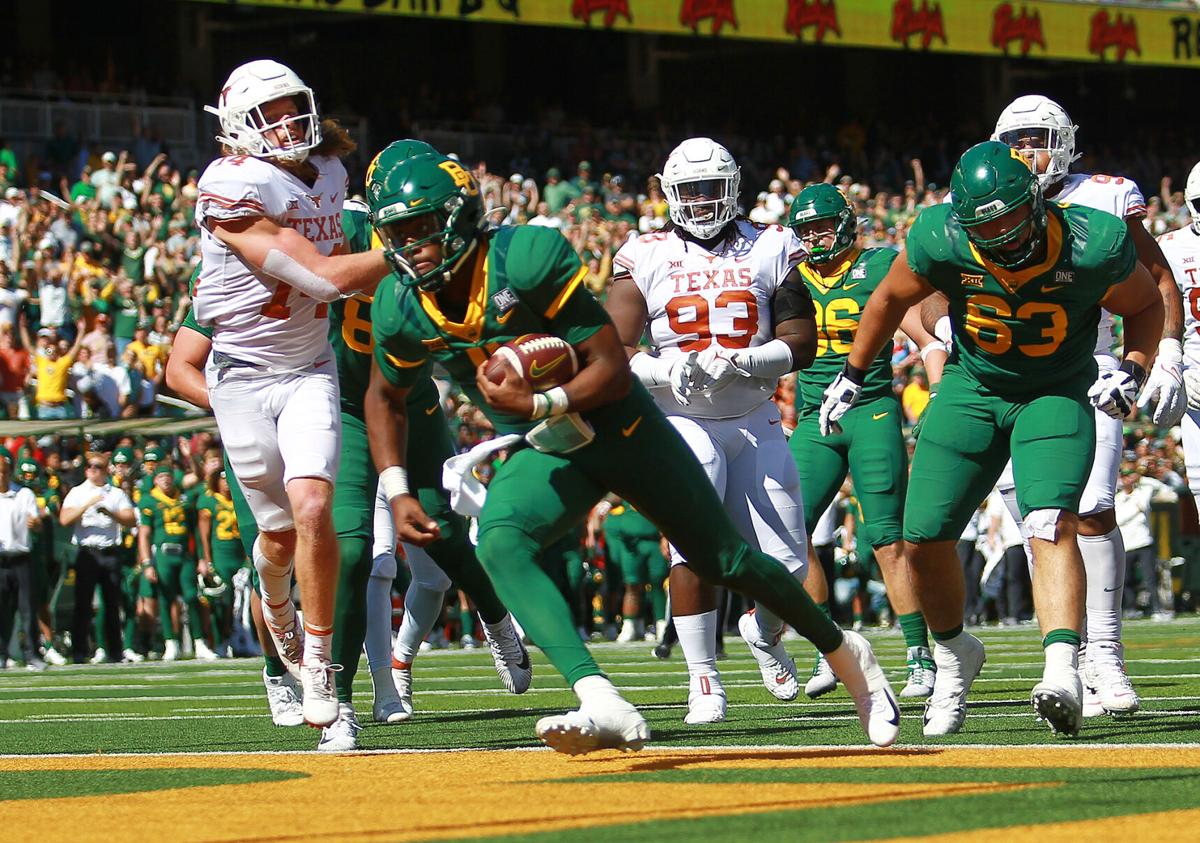 Baylor quarterback Gerry Bohanon scores on a six-yard run in a 31-24 win over Texas.

The race for the Big 12 championship game Dec. 4 at AT&T Stadium is essentially down to three teams: Oklahoma, Oklahoma State and Baylor.

November will be intriguing as the No. 4 Sooners play both the No. 14 Bears and No. 11 Cowboys on the road with a Nov. 13 date at McLane Stadium and a Nov. 27 date at Boone Pickens Stadium.

The Sooners also have a Nov. 20 home date against Iowa State, which suffered a severe blow to its championship hopes with Saturday’s 38-31 loss to West Virginia in Morgantown to fall to 3-2 in the Big 12.

Since the Sooners are the Big 12’s only unbeaten team at 9-0 overall and 6-0 in conference play, they’re the only one that has a legitimate shot at making the College Football Playoff.

But the Bears and Cowboys, both 7-1 overall and 4-1 in the Big 12, will have a lot of say whether the Sooners get there. In the only head-to-head meeting between the top three championship game contenders, Oklahoma State beat Baylor, 24-14, on Oct. 2 in Stillwater.

The Bears haven’t spent a lot of time dwelling on making a second Big 12 championship game appearance after making their first in 2019 in a 30-23 loss to Oklahoma. They’ve managed to keep their focus squarely on the next opponent, knowing they can’t overlook struggling TCU (3-5, 1-4) on Saturday at 2:30 p.m. at Amon Carter Stadium in Fort Worth.

Of course, the game will have a strange vibe since TCU athletic director Jeremiah Donati announced Sunday night that the school has parted ways with head coach Gary Patterson after 22 seasons. Jerry Kill, who was on Patterson's staff, will take over as interim coach the rest of the season.

While the Horned Frogs have dropped double-digit losses to Oklahoma, West Virginia and Kansas State in their last three games, the Bears are soaring after three straight home wins over West Virginia, BYU and Texas.

Baylor rallied from a 21-10 deficit midway through the third quarter to pull off a 31-24 win over the Longhorns. With so much success closing games this season, the Bears were certain they could do it again against Texas.

“Our motto is pound the rock,” said Baylor running back Abram Smith, who rushed for 113 yards and scored the final touchdown on a dazzling 32-yard run. “We got some adversity. It didn’t start off the way we wanted it to. We knew we had to finish strong. We had to come out and be the team we knew we were.”

A less confident team might have cratered after quarterback Gerry Bohanon threw his second and third interceptions of the season in the first half or after Texas quarterback Casey Thompson found Xavier Worthy flying behind the Baylor secondary for a 63-yard touchdown.

Brice Cherry: Sorry, Bijan, but the best back on the field played for the Bears

“I think getting punched in the face by a really good Texas team, that was anticipated,” said Baylor coach Dave Aranda. “It was good that we were able to get our hands back up and throw some punches of our own.”

The Longhorns hurt themselves when they attempted a fake punt on fourth-and-11 that blew up in their faces when Cameron Dicker was stopped for a two-yard gain at Baylor’s 47.

Then the Bears pulled off the play of the day when Smith spun away from a Texas defender and outraced everybody down the right sideline for a 32-yard touchdown run for a 31-21 lead with 7:59 remaining.

“When I got the ball (a Texas defender) was right in my face,” Smith said. “I threw a little stiff-arm and spin. I got out of the tackle. As soon as I got out into open space, I saw a receiver out there. I knew I was going to feed off his block. And after running the ball so hard I didn’t think the safety was going to get the angle. It gave me that crease, and I just took it and ran with it.”

When Kalon Barnes broke up Thompson’s final pass with 1:40 remaining, the Baylor fans went crazy in the stands.

“I think the crowd had a lot to do with that, to be honest,” Aranda said. “Just McLane kind of waking up and how loud it was, and the juice, I felt it, just kind of standing there. I know on the field it was very much felt. It aided in their rush, for sure.”

After facing TCU and Oklahoma, the Bears have a road game against Kansas State on Nov. 20 in Manhattan followed by the regular season finale against Texas Tech on Nov. 27 at McLane Stadium.

Oklahoma State faces West Virginia in Morgantown on Saturday followed by a Nov. 13 home date against TCU, a Nov. 20 road date against Texas Tech, and then the regular season finale against Oklahoma.

Closing strong in November is Baylor’s next task. Aranda knows his veteran team has the confidence to do it, beginning Saturday on the road against bitter rival TCU.

“They have experienced the good and the bad, and they know what that’s like,” Aranda said. “We’re going to have to do it on the road, with a home crowd that’s going to do what we did today. But I think it’s a big step to have some adversity and fight through it.”

Check out complete preview coverage of Baylor at TCU on Nov. 6, 2021.

It turned out to be a bit of a late-arriving crowd for Baylor’s 11 a.m. kickoff against Texas on Saturday at McLane Stadium. As the game start…

Baylor quarterback Gerry Bohanon scores on a six-yard run in a 31-24 win over Texas.