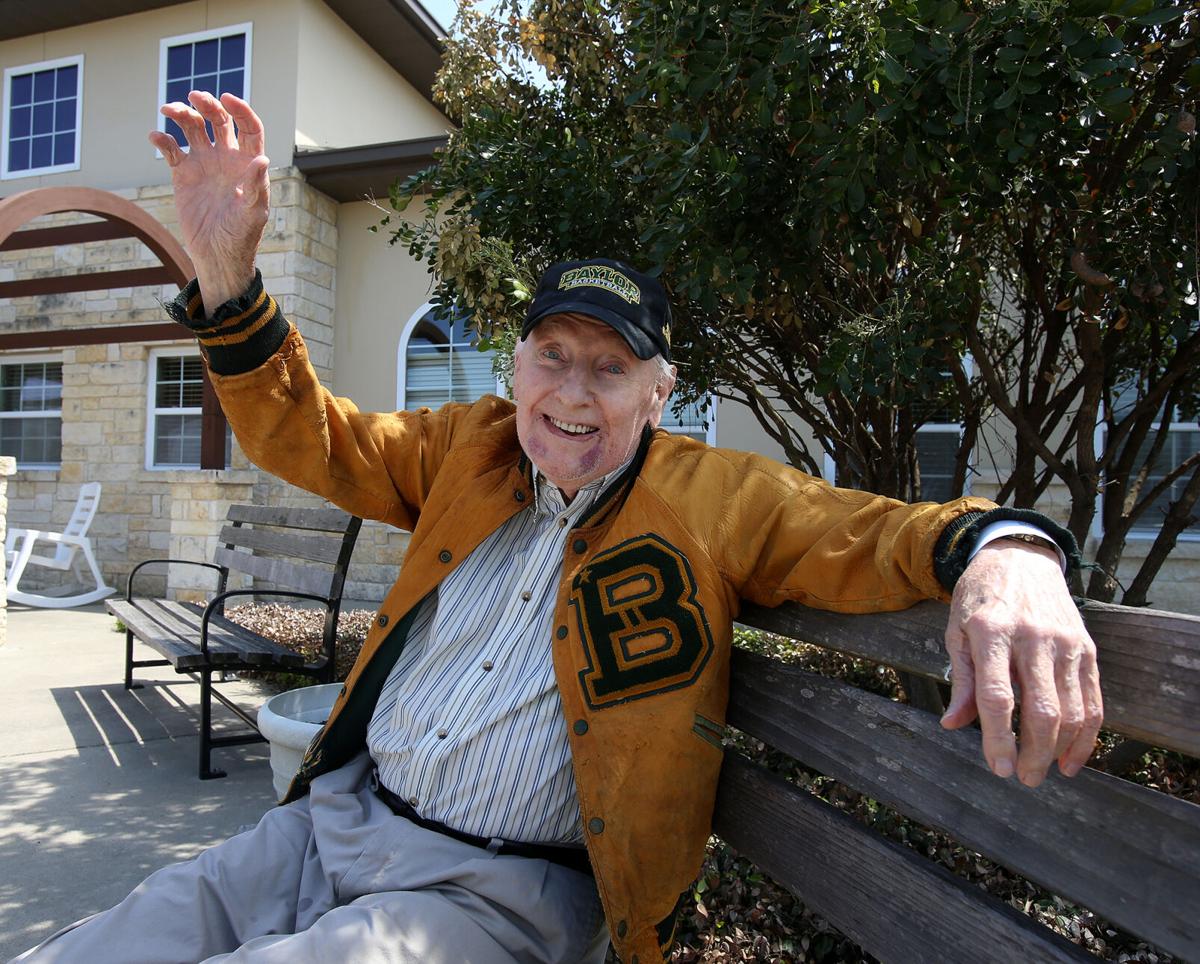 Bill Fleetwood wears his letter jacket and gives the “Sic ‘em Bears” sign Friday ahead of Baylor’s Final Four matchup with Houston on Saturday. Fleetwood was a member of the 1950 Baylor basketball team, the last Baylor men’s team to play in the Final Four. 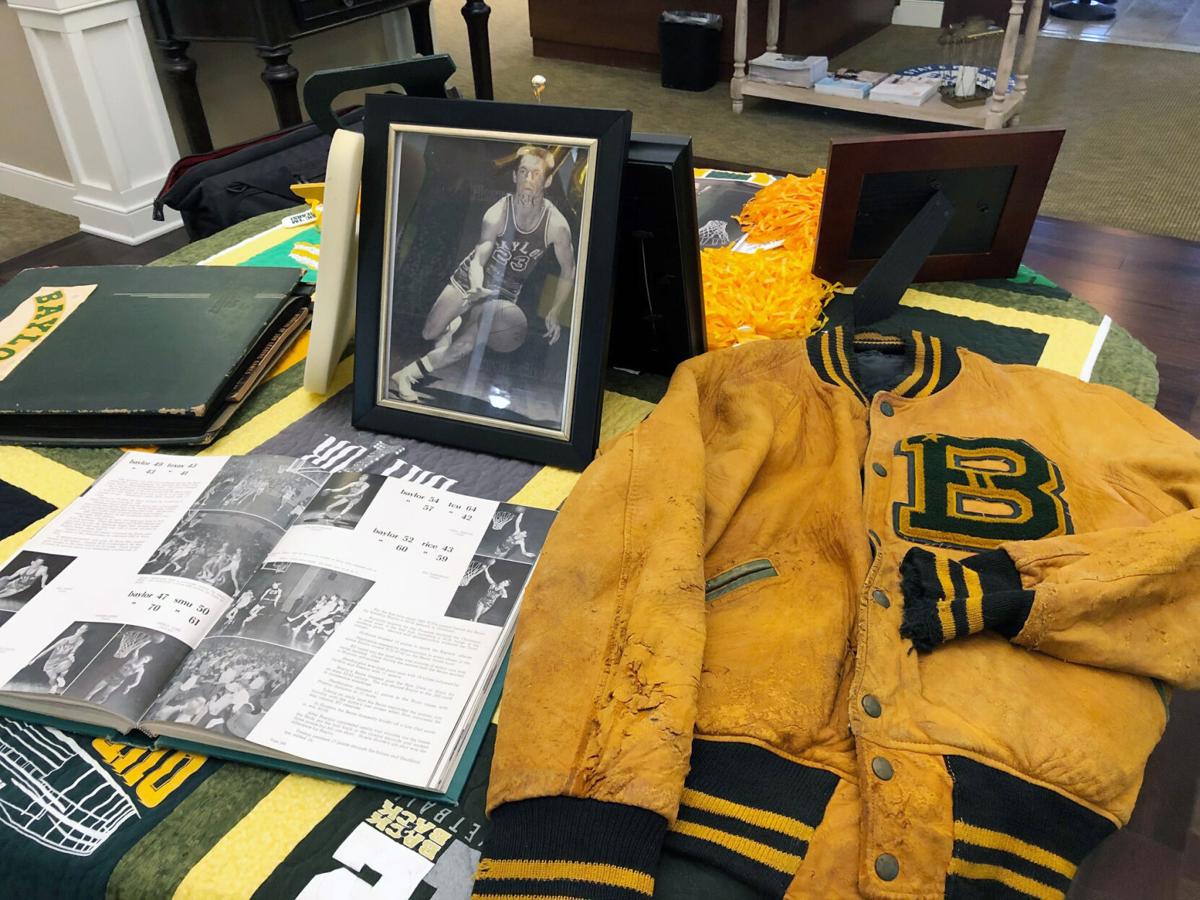 Bill Fleetwood was honored with a display at his senior living center in Hewitt after Baylor clinched the Big 12 conference title in basketball. 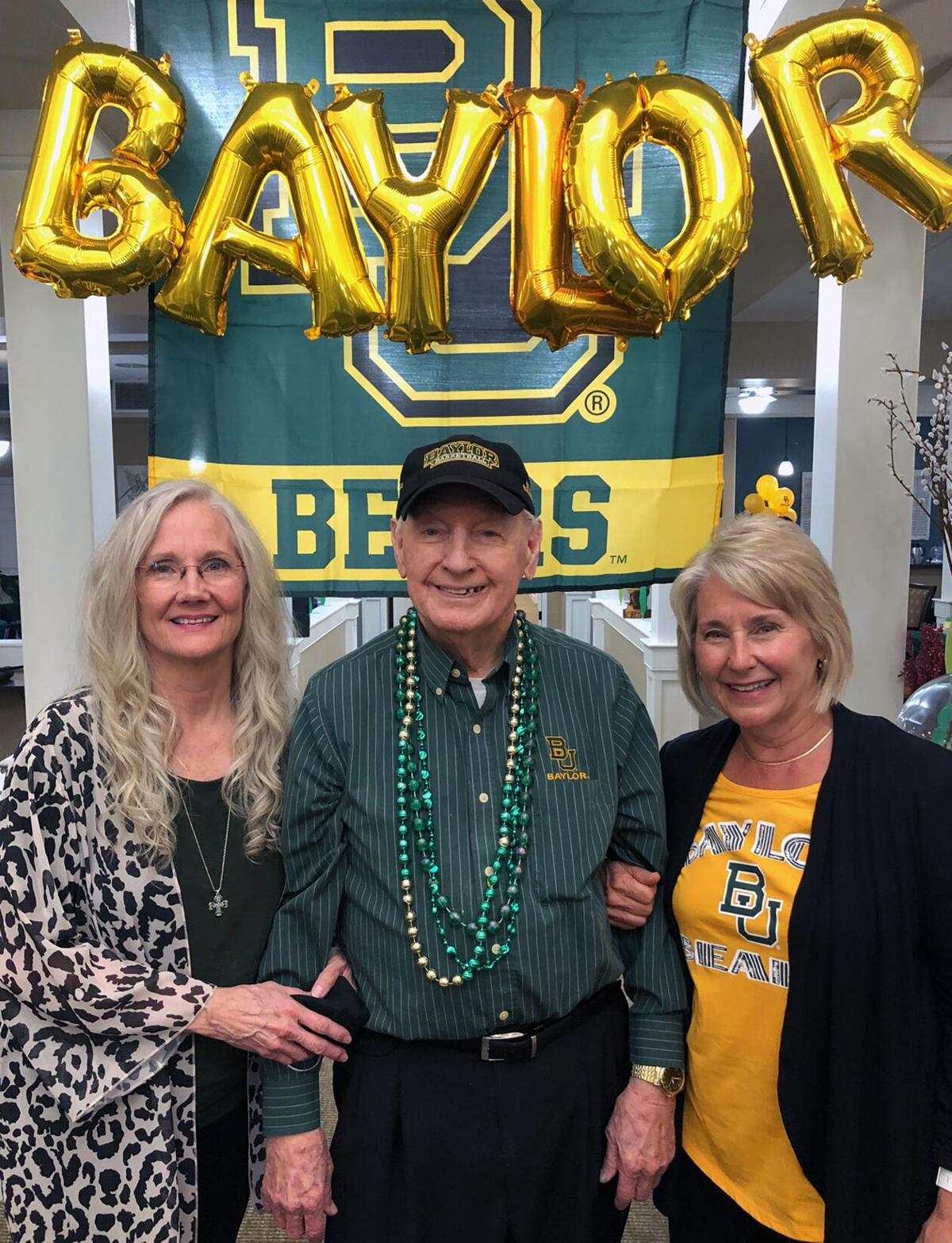 Bill Fleetwood, who played on the last Baylor basketball team to make it to the Final Four, is flanked by two of his daughters, Darlene Twitty, left, and Cheri Jennings. 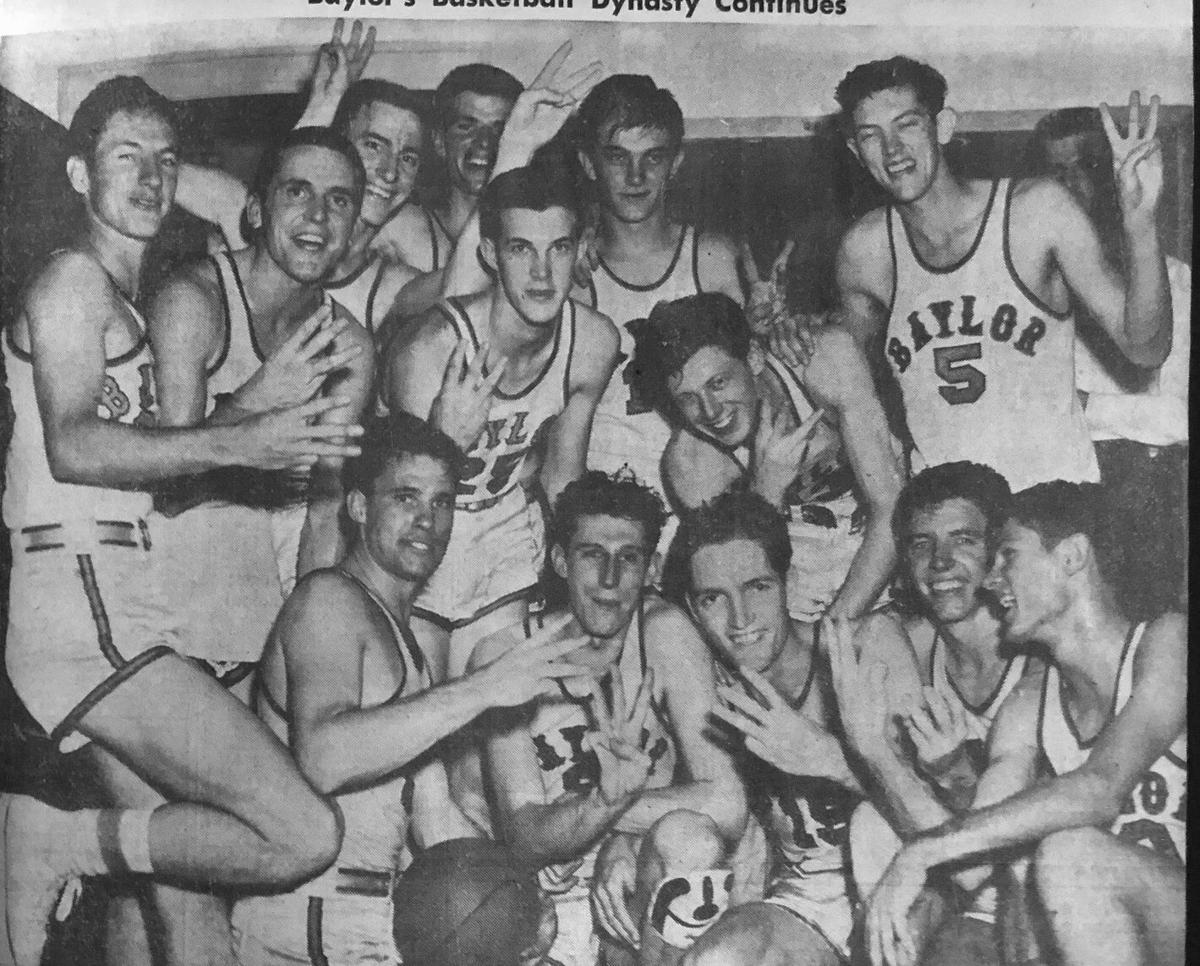 Bill Fleetwood, far left, celebrates with other members of his 1950 Baylor basketball team. 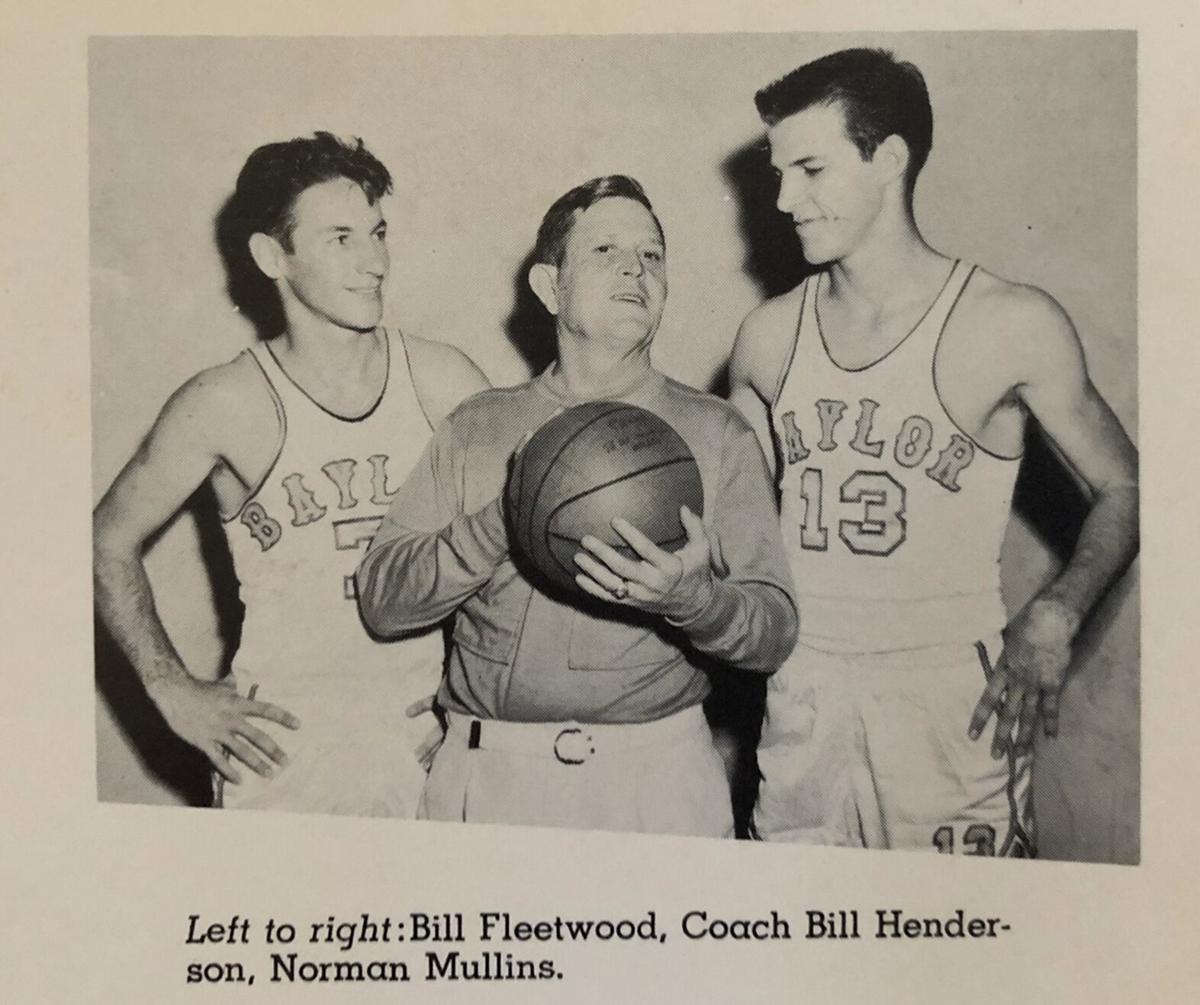 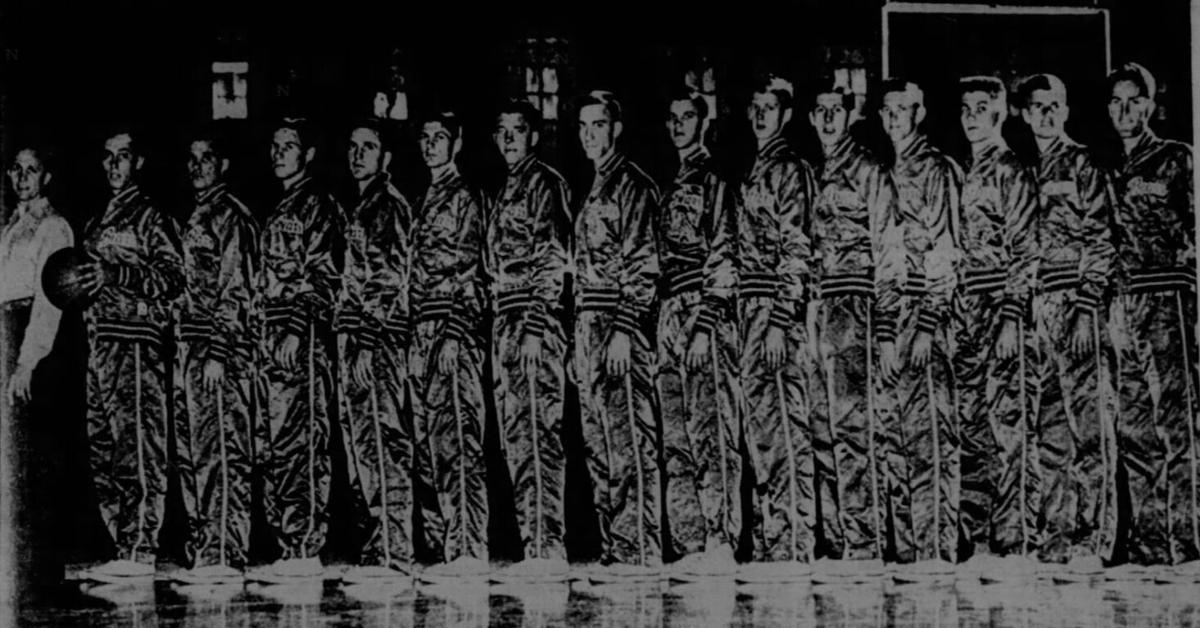 Bill Fleetwood, 91, and Howard Hovde, 93, played for Henderson, known as “Mr. Bill,” on the Bears’ last Final Four team in 1950 and have waited 71 years to see their alma mater return to that level in the national March Madness spotlight.

The two are believed to be the last surviving members of that historic team.

Fleetwood will be glued to the television set Saturday afternoon to cheer on the Baylor team as they take on the University of Houston for a chance to advance to the NCAA championship game.

The years, much like the frazzled, time-worn Baylor letterman’s jacket he wore Friday, have taken their toll on Fleetwood. He gets around with the help of a walker and was able to attend the Baylor-Texas Tech University game that clinched the first Big 12 championship for the Bears. But there is no questioning the sparkle in his bright blue eyes when he talks about Baylor basketball.

“The Lord allowed me to keep playing ball and be in school and play for a championship,” Fleetwood said. “You never know when you are young and are away from home and go play for a team what it is going to be like. But we had some great teams, and I had a great time at Baylor.”

Fleetwood attended Baylor from 1948 to 1952 and was captain of the team his senior year. A 6-feet-tall, 137-pound guard, Fleetwood had two nicknames — “Billy Basketball” and “Nipper.”

“They called me Nipper because they said I would nip it in the bud,” he said with a smile. “When the other team came down on fast breaks, I stopped them. I nipped it in the bud.”

Fleetwood remembers the exhausting train ride from Waco to Chicago in 1950, where the Baylor team made a stop to play Bradley University on its way to Madison Square Garden in New York.

“We boarded a train in Waco and we rode a Pullman car all the way to Chicago,” Fleetwood said. “We stopped in Chicago because we had a game against Bradley. That was a long trip, but our coach wanted to keep his feet on terra firma. He wasn’t about to get on an airplane at that time.”

Henderson led Baylor to the Southwest Conference title in 1946. That marked the first time the Bears “went dancing,” as they made the NCAA’s Western Regional, losing to future Big 12 rival Oklahoma State, known then as Oklahoma A&M.

Kentucky won the game, 58-42, and the Bears settled for national runner-up.

Baylor added Southwest Conference titles the next two seasons after that, and in 1950 the Bears made a second trip to the Final Four. They lost to top-ranked Bradley and subsequently to fifth-ranked North Carolina State University in the NCAA consolation game.

Fleetwood grew up in Houston, playing both football and basketball at the former Jefferson Davis High School in downtown Houston. He was awarded a basketball scholarship to Baylor and also intended to try out for the football team. However, it turns out “Mr. Bill” also was an assistant football coach at the time who “persuaded” Fleetwood to stick to the round ball.

“The first day of practice, I dressed out for football and I was going to go out for the team,” Fleetwood said. “I got all dressed up and Mr. Bill happened to be the backfield coach. Well, I went out there and he looked at me and said, ‘You know what you are doing, don’t you?’ I said, ‘I’m going out for the team.’ He told me if I got hurt I would lose my scholarship, and that was it. I went back in, took off the uniform and never went back.”

After graduating from Baylor in 1952, Fleetwood got a master’s degree at the former Sam Houston State Teachers College. He was a teacher for a few years before entering school administration, including serving as principal and superintendent in Dew, a small community in Freestone County.

Asked if he has any advice for the current group of Baylor players, Fleetwood raised his right arm, formed the familiar “bear claw” and said, “Sic ‘em Bears.”

“They will get with it. It’s going to be a good game. It will bear watching,” he said with an intended pun and a grin.

Fleetwood has been living at a senior center in Hewitt since shortly after the 2012 death of his wife, Mary, his high school sweetheart. He has three daughters.

Hovde, who lives in San Antonio with his wife of 67 years, also has fond memories of that 1950 season and playing for Henderson on those groundbreaking Baylor teams.

“I had dreamed all my life about playing in games like that,” Hovde said. “I came from a small town in Wisconsin that had about 300 people. So basketball to me was two baskets put up on the school grounds. Just thinking about playing in Madison Square Garden was an absolute dream.”

Hovde’s first coach was his father, who played basketball at the University of Wisconsin. He spent two years in the Navy and came down with rheumatic fever. His doctors told him he would be less likely to get it again if he chose a school in the south to attend.

So Hovde, who was 21, applied to several southern schools, including Texas Christian University and Southern Methodist University, but Baylor was the first school that responded so he ended up in Waco.

After graduating from Baylor, Hovde got a graduate degree in family life education and started a church in New Jersey, worked as a pastor, missionary, coach and teacher.

He said he has good feelings about Baylor’s chances in the Final Four.

“It’s their first time back since we went 71 years ago,” he said. “That team is so good. They have three great guards and they are as tough as anything and they can shoot the bottom out of the basket from three-pointers. They also play wonderful defense. I like their chances.”

INDIANAPOLIS — When the 2020 NCAA tournament was canceled due to the COVID-19 outbreak, Baylor seniors Freddie Gillespie, Devonte Bandoo and O…

Bill Fleetwood wears his letter jacket and gives the “Sic ‘em Bears” sign Friday ahead of Baylor’s Final Four matchup with Houston on Saturday. Fleetwood was a member of the 1950 Baylor basketball team, the last Baylor men’s team to play in the Final Four.

Bill Fleetwood was honored with a display at his senior living center in Hewitt after Baylor clinched the Big 12 conference title in basketball.

Bill Fleetwood, who played on the last Baylor basketball team to make it to the Final Four, is flanked by two of his daughters, Darlene Twitty, left, and Cheri Jennings.

Bill Fleetwood, far left, celebrates with other members of his 1950 Baylor basketball team.