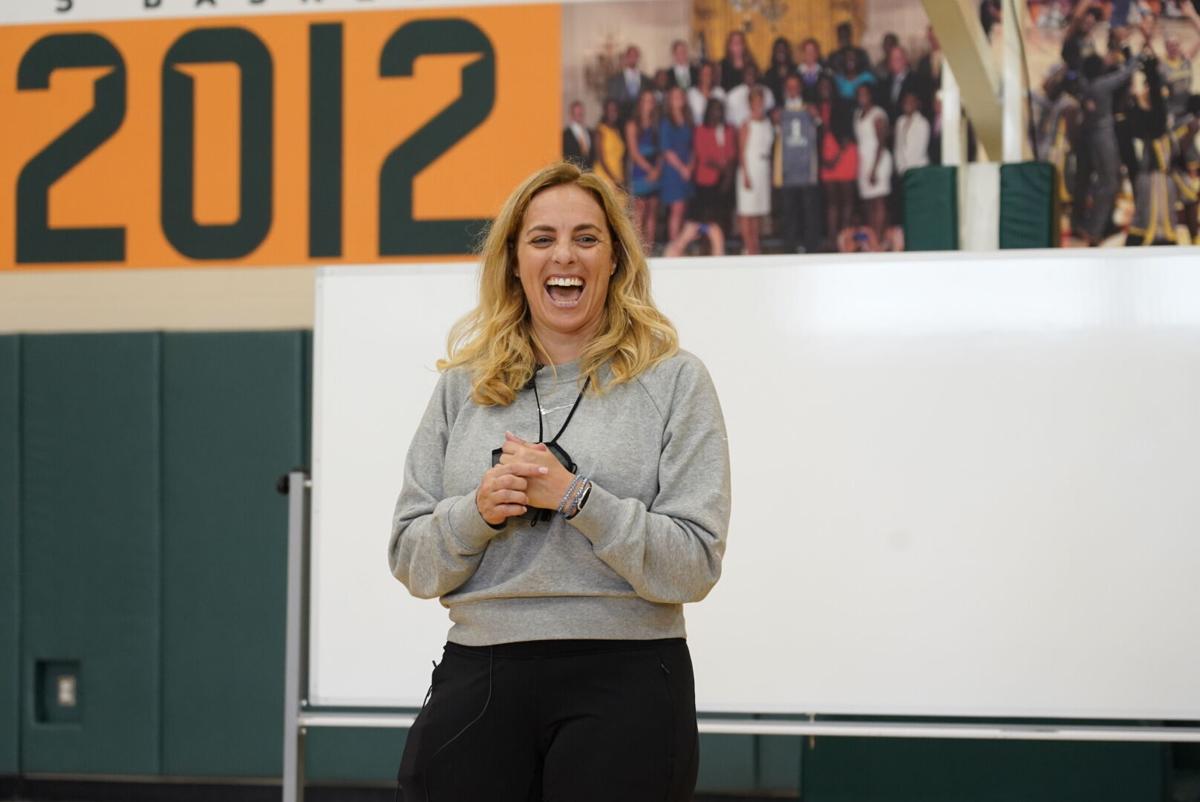 New Baylor women’s basketball coach Nicki Collen shares a laugh with some of her players upon arriving in Waco on Tuesday. 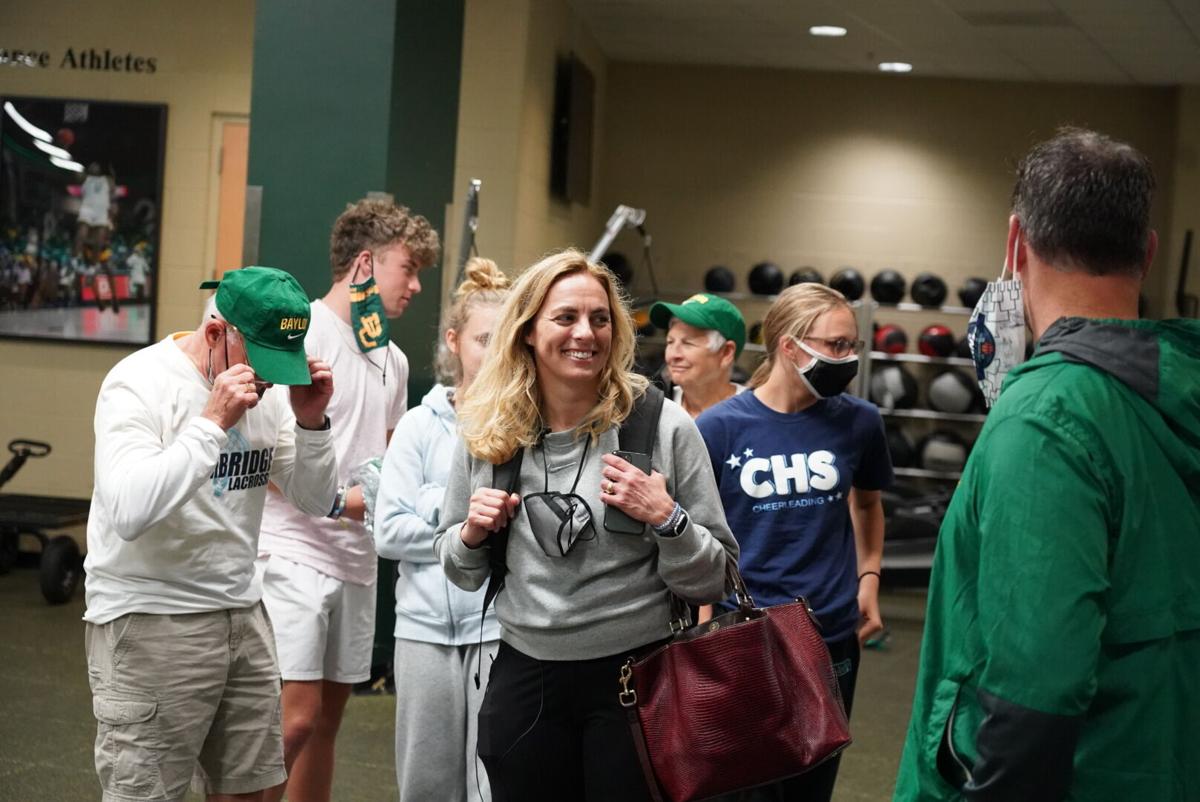 New Baylor women's coach Nicki Collen (center) checks out the facilities at the Ferrell Center along with her family on Tuesday.

When Baylor announced the hiring of Nicki Collen as its new head women’s basketball coach, my reaction probably mirrored many of yours.

However, Collen shouldn’t be summarily dismissed as a bad hire just because she wasn’t a household name here in Waco. Who knows how it’ll work out? But it would be wise to get to know Collen and at least give her a chance.

Throughout his time as Baylor’s athletic director, Mack Rhoades has displayed a tendency to go off the radar with his coaching hires. He doesn’t care if they’re the big name or the person everyone in the fan base wants to hire. He cares most about whether they’re the right fit for Baylor and that particular program.

“I learned a long time ago, certainly you want to please people but you can’t please everybody,” said Rhoades in a phone interview on Tuesday. “All of the noise about who you should hire, who you shouldn’t hire, this name, that name, they’ve only coached this long … that stuff is all noise to me. I just think it becomes a distraction from really focusing on what you want — on what we want and what we need as an institution.”

In 2016, Rhoades was tasked with finding the next leader for the Baylor football program. Jim Grobe nobly stepped out of retirement to pinch hit for a year, but Grobe always insisted it was a short-term gig. As the coaching search heated up, many hot names bubbled to the surface: Chad Morris, then of SMU, Arkansas State’s Blake Anderson, Colorado’s Mike MacIntyre, Western Kentucky’s Jeff Brohm. So, who did Rhoades hire?

Well, none of them. He instead opted for Matt Rhule, who had gone 28-23 in four years at Temple and was highly regarded in coaching circles for his dogged determination and optimism.

Some Baylor fans may disagree, but I consider Rhule the perfect fit for Baylor at the time. He instilled a discipline and commitment to community service that was lacking during the Art Briles era. He also steadily built up the on-field product, including fortifying Baylor’s defense to its best results in years.

Yes, Rhule constantly flirted with the NFL from the time he arrived at Baylor and eventually left for the Carolina Panthers following his third season, a season in which the Bears went 11-3 and made the Sugar Bowl. But I still contend that he brought respect back to the program and got it going in the right direction again.

In early 2020 after Rhule left, Rhoades had to hit the trail again to hire another football coach. Just as before, people threw out plenty of names as a possible successor to Rhule, among them BU assistant Joey McGuire, Tulane’s Willie Fritz, Louisiana’s Billy Napier, Cincinnati’s Luke Fickell and UCF’s Josh Heupel.

Again, Rhoades went in a different direction. He gave LSU defensive coordinator Dave Aranda his first shot at a head coaching position. You can say the jury is out on Aranda as a hire and that would be perfectly fair. It would also be fair to give him a free pass on 2020, considering the, you know, global pandemic that completely altered the world, college football included. Besides, if you spend any amount of time around Aranda, it’s impossible to walk away unimpressed by his thoughtfulness and overall football knowledge.

So back to present day, and Nicki Collen. This is exactly why I tend to give Mack the benefit of the doubt in terms of the Lady Bears hire. Unlike the rest of us, he interviewed her at length (we’ll get that chance) and obviously came away inspired.

“It was a combination of many things,” Rhoades said. “Probably the highlights are her faith, which is a big part of her journey and aligns with our Christian values. I could see she had great passion for her family. The passion and empathy and love she had for her players. She’s all in. She’s all in with her players.

“Her intellect and humility — that’s such a great combination. I think that makes a lifelong learner. Finally, her basketball mind, her basketball IQ, and the breadth of experience she has had at the college and pro level. Those are the things that really stand out.”

In some ways, Collen’s task is harder than either of the football coaches that Rhoades has hired. In other ways, it’s easier. The former coach of the WNBA’s Atlanta Dream inherits the keys of a Lady Bear program that has operated at an elite national level for a long time. Of course, the architect for that elitism has left town, as Kim Mulkey departed for LSU.

Mulkey’s shadow will linger over the Lady Bear program for years to come. Heck, her picture is everywhere in the Ferrell Center, holding up trophy after trophy in celebratory glee. She has her own banner hanging in the arena rafters (from her 2000 induction into the Women’s Basketball Hall of Fame), and it would make a lot of sense for Baylor to raise another one for this year’s Naismith Hall of Fame enshrinement. (Though I haven’t gotten word that they’ll indeed do so. Forgot to ask, actually.)

It’s never easy to follow a legend. Just ask Holly Warlick, who followed her mentor Pat Summitt at Tennessee. Remember Gail Goestenkors at Texas? She lasted five seasons after coming to Austin following the retirement of Jody Conradt. Similarly, Kristy Curry struggled to live up to the standard at Texas Tech that had been set by Hall of Famer Marsha Sharp over her quarter-century run.

Here’s the difference, though. You can make the case that all of those programs were on the downturn when the next coach was hired, at least slightly. Baylor is one of a handful of the sport’s powerhouse programs, along with UConn, Stanford and Notre Dame. The Lady Bears are two years removed from an NCAA title and were one whistle away from beating UConn this past season and reaching the Final Four. They’re in good shape.

Mulkey deserves credit for building that tower of excellence, but Collen could benefit from it and enjoy the view. Mulkey is gone, but she didn’t take everything that made Baylor Baylor with her. The Lady Bears are blessed with splendid locker room and practice facilities, and a new arena will soon rise on the horizon. Several quality players remain on the roster, led by Big 12 Player of the Year NaLyssa Smith. The Big 12 still has a ways to go to become a preeminent conference in women’s basketball again, but as one of the Power 5 leagues it at least has that potential.

Whenever Baylor needs to hire a coach, Rhoades always terms the process as a “national search.” For the Lady Bear hire, he ventured over to Atlanta and into the WNBA ranks to pluck Collen. You can bet he wasn’t constantly checking Twitter or Facebook or Instagram all along the way to see what the Baylor fans were saying about the vacancy.

“I’m not a big social media user, and that’s why,” Rhoades said. “There are some great things on social media, but there are some negative things. I don’t want it impacting my decision-making process. I’m human. All of those things can influence you, and so I stay away from it and stay focused on the task at hand, and what we need.”

Yeah, that Mack Rhoades is looking smarter all the time.

Look to the Chargers and Seahawks to make the playoffs

New Baylor women’s basketball coach Nicki Collen shares a laugh with some of her players upon arriving in Waco on Tuesday.

New Baylor women's coach Nicki Collen (center) checks out the facilities at the Ferrell Center along with her family on Tuesday.