Grant Teaff once wrote a book entitled “I Believe.” On the day after the Baylor coaching legend’s 88th birthday, this current batch of Bears scripted Volume Two: “We Believe, Too.”

Swagger alone won’t win you a football game. Plenty of guys strut when they step off the bus, only to wilt the first time someone hits them in the mouth.

That’s what made the 18th-ranked Bears’ 27-14 dismantling of No. 4 Oklahoma on a Chamber of Commerce kind of Saturday at McLane Stadium so thoroughly impressive. Just a week ago, the Bears got popped. That was a bad loss at TCU, and they knew it. But they didn’t let it linger. Their belief didn’t waver. The Bears’ swagger stayed intact.

“It’s a controlled confidence,” said Baylor linebacker Terrel Bernard. “I think we put in the work and expect the results.”

Honestly, it reminded me of Hulk Hogan. OK, buckle up, because the analogy may be worth the ride. As a child of the 80s, I used to watch a lot of ’rasslin. In any big match, Hulk would find himself writhing in pain while he took a beating from the Heel of the Week. His opponent would wail away, and the Hulkster would cavort into a series of full body spasms. Wham, wham, wham — he’d get hit over and over again, until finally, the bad guy would let loose with a mighty blow that should have knocked the Hulkster out. Instead, Hogan would grow crazed and wide-eyed. The message? You shouldn’t have done that, and now you’re going to pay.

TCU may have done the pounding, but it was the Sooners who had to pay. From the very first play of Saturday’s game, the Bears exhibited a fire and an energy that signaled this day was going to play out a lot differently. Baylor’s defenders brought the heat on OU’s fab freshman quarterback Caleb Williams, and Williams never really recovered. He was rattled the rest of the day — and he wasn’t even the guy named Rattler.

“We came in knowing that we were definitely going to pressure the quarterback,” said Bernard, who scooped up two of the team’s five sacks.

Make no mistake, this could have gone the other way. Distraction hovered over the Bears’ heads all week, like a drone taking those cinematic landscape shots. Baylor coach Dave Aranda acknowledged the elephant in the room. Or make that the kangaroo (a marsupial named Joey McGuire) not in the room. “I felt out of sorts, really, just with all of it,” Aranda said, of his former associate head coach taking the head position at Texas Tech.

But the Baylor players powered through, and they attacked practice with gusto. Aranda said that the Monday practice looked like none he’d seen since coming to Waco, in terms of the players’ focus and drive and willingness to be coached. That set the tone for a week’s worth of “the best practices since I’ve been at Baylor,” Aranda added.

“It was almost like teaching the teacher,” Aranda said, crediting the players’ perseverance.

That such fire spread across the river from Baylor’s practice field to the McLane turf shouldn’t be shocking. On the contrary, that’s the entire point. If Baylor intends to indeed challenge for a Big 12 title — and the Bears thrust themselves squarely into the race with the upset of OU — they’ll have to carry that same mindset into next week’s preparation for a road game at Kansas State. Call it coachspeak, but it’s true. That’s where it starts.

Aranda said that he suspects the magnitude of the opponent motivated much of his players’ passion. Everything about this one screamed Big Game. Fox’s “Big Noon Kickoff” crew, complete with former OU coach Bob Stoops, set up camp in Waco. The Sooners brought an unbeaten team into town, with aspirations of (again) finding a seat on that College Football Playoff bus before they bolt for the SEC in another couple of seasons. If not sooner, no pun intended.

One guy who’s clearly in the majority, one guy who gets it, is Gerry Bohanon. Baylor’s junior quarterback suffered his worst game of the season in last week’s loss to the Frogs. In such moments, your mind can become your worst enemy. Doubt creeps in, along with his equally toxic pals Disgust, Anger and Self-Loathing.

Bohanon dismissed them all, and got back to work. He didn’t play flawlessly against the Sooners — who does? — but his rugged running turned out to be Baylor’s most effective plays of the day, whether they came on designed keepers or improvisational scrambles. Moreover, he showed toughness. Leadership. And, dare I say it, belief.

After the game, I asked him about it. Again, from his perspective, that TCU game sucked. No other way to put it. So, did his belief ever waver?

“We go into every game knowing, we’re the best team, and we can win,” Bohanon said. “On my Instagram they posted a practice picture of us. One day it was just offense and some coaches in there, and I’m quoted, ‘Believe.’ I always tell those guys just believe.

For the OU game, the Bears believed. They showed a necessary zeal, a swagger. It was apparently there all week in practice. Clearly, it showed up on the field. It even lingered afterward, long after the Baylor students dispersed following their second, more successful attempt, at storming the field. Bernard busted into the postgame interview room like he was still hunting a ball carrier, bellowing, “Let’s go!” in the direction of the assembled media. Once a blaze spreads, it’s hard to extinguish.

Now the Bears must figure out how to hold onto that fire — and not wait around to get hit in the mouth to light the match. 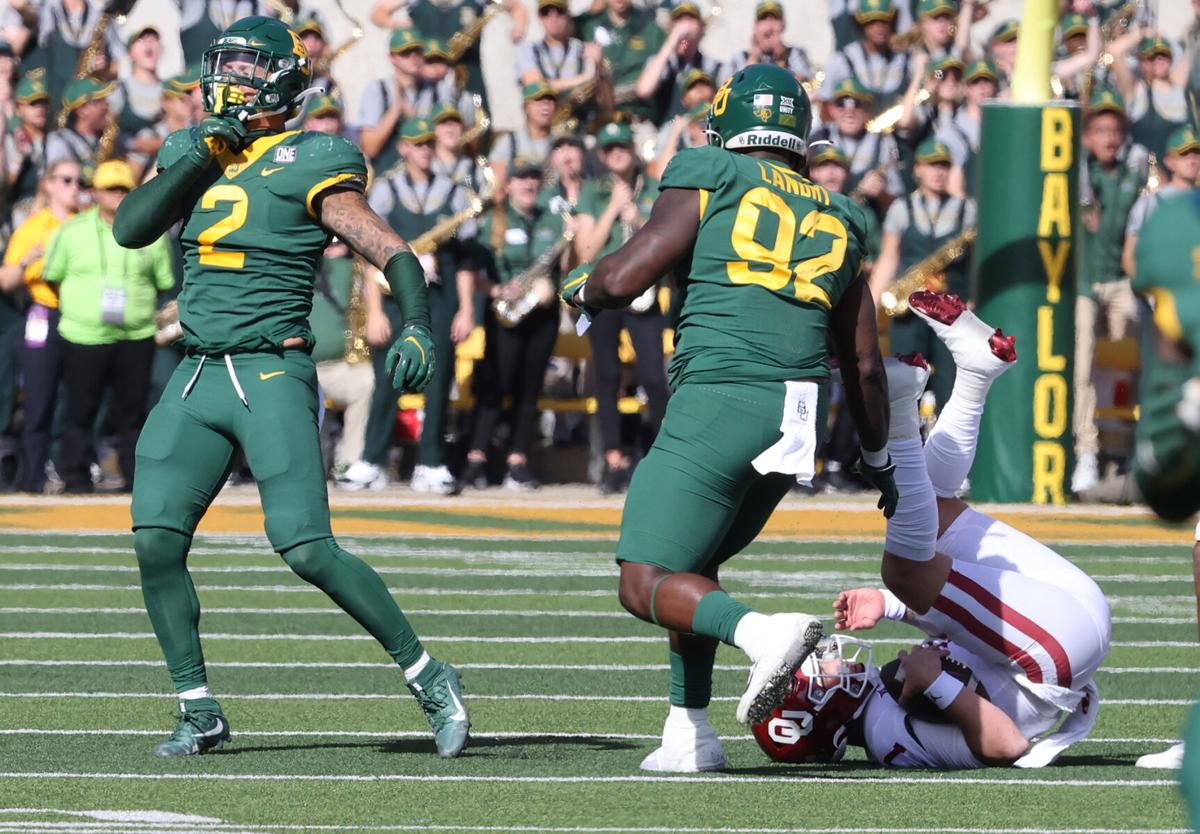 Baylor linebacker Terrel Bernard (right) reacts to his tackle of Oklahoma quarterback Spencer Rattler in the second half of the Bears’ 27-14 victory on Saturday. 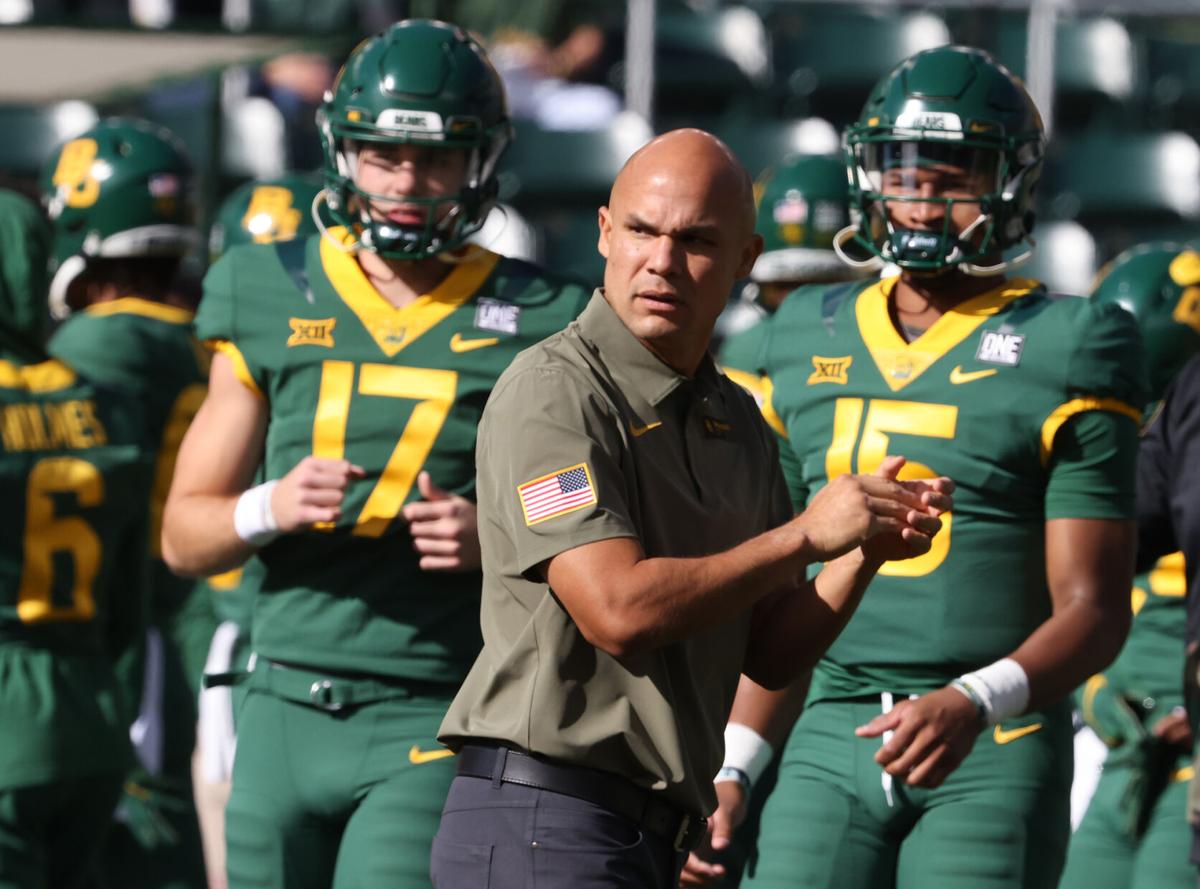 Baylor coach Dave Aranda is hoping his team can create energy from within on the road Saturday against Kansas State after losses at Oklahoma State and TCU.