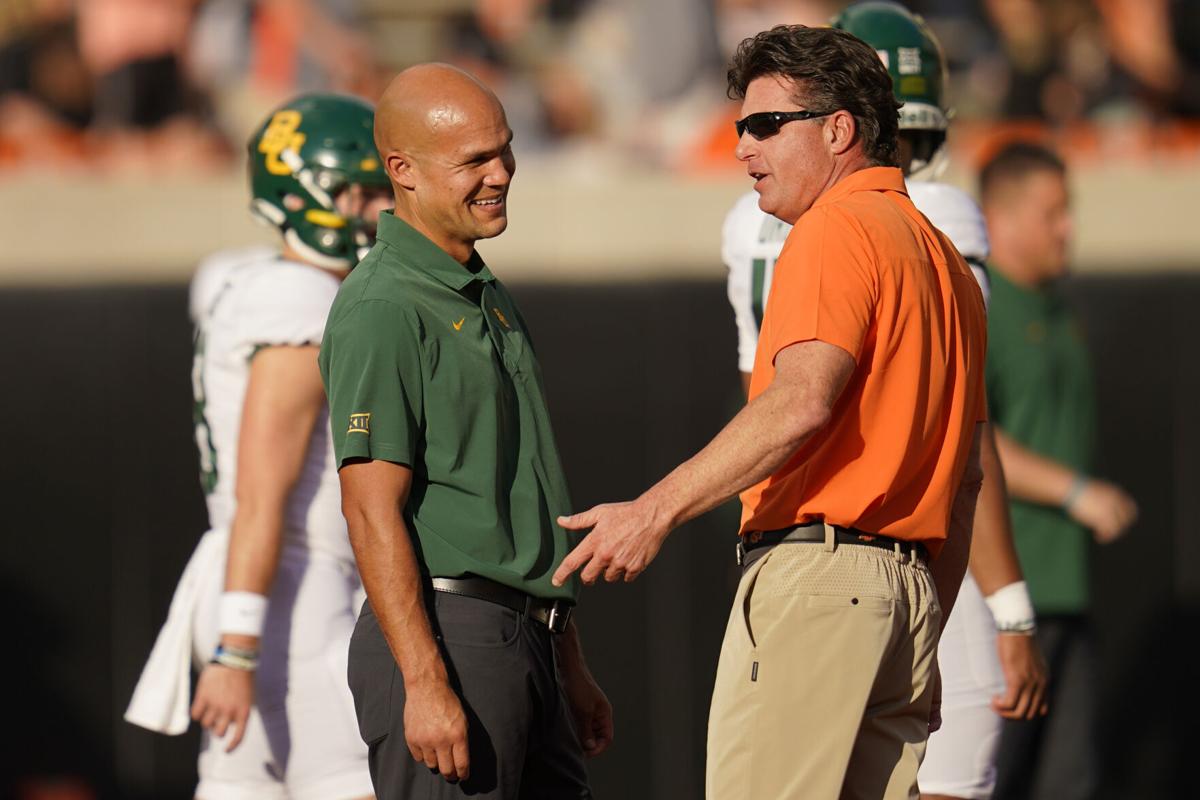 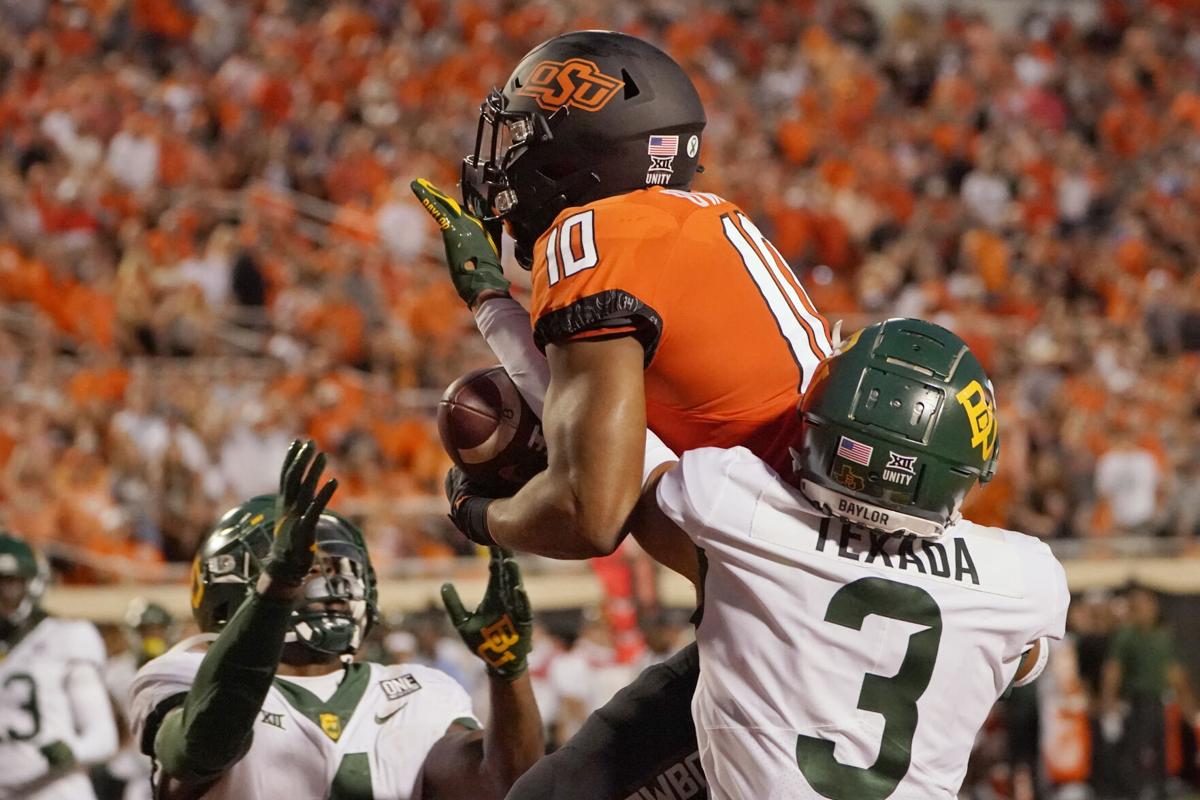 STILLWATER, Okla. — College football fans are used to screaming “What’s with these calls?” at the TV or the field.

But more often than not, such outbursts are directed at the officials, not the coaches.

Not on this day, not if you were a Baylor backer. The refs were fine. The guys in the headsets? Yecch. They seemed to be actively working against their own team.

Baylor’s uneven 24-14 loss to No. 19 Oklahoma State on Saturday at Boone Pickens Stadium represented an abject failure by the guys calling the plays for the Bears. If this one had been bound in a children’s book, it would have been called “Dave Aranda and the Terrible, Horrible, No Good, Very Bad Day.”

Not that Aranda should shoulder all the blame. His entire staff fumbled this one. None of the guys in the green polos on Baylor’s sideline gave the Bears a reasonable shot to win a game that was right there for the taking.

Heck, I’ll join the chorus. What’s with these calls? My gosh.

Baylor notebook: Doyle answers the call on both defense, offense

STILLWATER, Okla. — Dillon Doyle is well-established as one of Baylor’s top defenders.

After a listless, go-nowhere first half offensively, Baylor responded to the obvious wakeup call in the second half. The Bears scored a pair of touchdowns, and after Gerry Bohanon plowed into the end zone from a yard out, they trailed the Cowboys just 17-14 with a veritable lifetime, more than 12 minutes, still to play.

But down the stretch, an outbreak of boneheadedness from the BU coaches extinguished all hope for the Bears.

After Baylor’s defense heroically gave its team another clutch stop, Baylor regained possession of the ball with 9:30 remaining, trailing by a mere field goal. Following a couple of incomplete passes, the Bears faced a 3rd-and-5 opted to hand the ball off to Abram Smith, who had nowhere to go and bounced into a pile of OSU defenders. Gain of a yard, and give credit to Smith for even squeezing out that much.

Now, keep in mind that other than one Smith 55-yard touchdown scoot, the Bears hadn’t mustered much of anything on the ground all game. It was a quizzical play call for Baylor on a night full of them.

Nevertheless, time marches on. Conventional wisdom suggests that you should punt the ball away. You still have more than eight minutes left on the clock, you’re sitting on your 36-yard-line, you’ve got a terrific field-flipper of a punter in Isaac Power, and your defense has been keeping you in it the entire way.

Baylor’s coaches, though, opted to find the nearest trash receptacle and stuff both convention and wisdom into it. Yes, the Bears opted to go for it on 4th-and-4 from their own 36. Bohanon was forced to scramble and tossed incomplete (where was the pass play on third down?), and OSU took over with a golden chance to salt the game away.

OK, yes, Baylor had been clicking along like high heels on a glass floor on its 4th down attempts this year. The Bears were 8 of 9 on their 4th-down tries coming into the game. But in that situation? Why in the world would you go for it in that situation?

Consider this bit of foretelling from Aranda from a few press conferences back.

“Now, we haven’t been on the other side of not making those (conversions) yet, and so that is eventually going to come,” Aranda said. “That’ll probably highlight some of those decisions.”

You think? As decisions go, this wasn’t exactly buying a ticket on the Titanic. But it was pretty stinkin’ bad.

After the game, Aranda said the analytics favored going for it. Boy, were the numbers ever wrong.

"It's one of those things to where we want to be aggressive and be that team that's hard to stop, it starts with us as coaches," Aranda said. "I remember in thinking about this, we may have talked about this a couple weeks ago, 4th downs are great when they work. When they don't it gives you second thoughts."

No flow in Stillwater: Cowboys hold off Baylor rally for 24-14 win

STILLWATER, Okla. — Dominance up front has been Baylor’s stated goal all season, but for long stretches all the Bears saw was a sea of orange …

Amazingly, though, the Baylor defensive unit AGAIN gave the Bears a chance. Despite the short field, the Cowboys couldn’t capitalize, as Baylor’s defenders forced a three-and-out. Following the OSU punt, the Bears still had 6:40 showing on the clock and the ball in their possession, trailing by three points.

Talk about dodging a bullet, right?

Well, no. Not exactly. The BU coaches opted to spin the chamber of the revolver and pull the trigger all over again. Did nobody ever explain to these guys the dangers of Russian Roulette?

Baylor ran for three yards on first down. Bohanon completed a pass to Tyquan Thornton for four yards on second down. That set up 3rd-and-3 from the BU 13. Feels like a time for another one of those short passing plays, right?

Well, no. Not exactly. Baylor offensive coordinator Jeff Grimes chose to hand the ball off to Trestan Ebner (final rushing total: zero yards), and the Cowboys gleefully dumped the BU back for a loss of a yard.

That’s just terrible, and it’s not on Ebner. It’s not on the Baylor offensive line, nor Bohanon. That’s on the coaches.

Naturally, Oklahoma State — which did everything possible to serve up the game to Baylor on an Eskimo Joe’s appetizer platter — said thank you, Baylor, for the much-needed second chance. Nine plays and a bevy of timeouts due to mass coaching confusion later, OSU’s Jaylen Warren scooted into the end zone. Ball game. Ice ice baby. Cowboys win it, 24-14.

Now, let’s keep it all in perspective. That giant orange OSU plastered in the middle of the Boone Pickens Stadium turf is not an acronym for Overreaction Saturday Ubiquitousness. But it might as well be, because so many people follow that pattern.

Every college football Saturday, you overreact. Oh my, Oregon lost — the Ducks are terrible! Georgia won big. The Bulldogs will never lose again!

It’s such a trap to overreact to one game, one performance, and it’s a trap I try to gingerly tiptoe around. That’s my cautious preface as I prepare to offer some further exposition following this ugly Baylor loss.

So, I’ll say this: It’s not the end of the world, Bear backers. If I had told you two months ago that Baylor would be sitting 4-1 after the first weekend of October, wouldn’t you have taken that?

That said, if you’re feeling concerned, it’s understandable. Because you know what? You’re really not overreacting to one game. Given its showing for the past six-plus quarters dating back to last week’s 31-29 win over Iowa State, the Baylor offense deserves a parking ticket. It hasn’t budged.

Now, the defensive units at both OSU and Iowa State are no slouches. They’re ranked 37th (OSU) and third (ISU) nationally. Both deserve a smidgen of credit for making life uncomfortable for Baylor.

But let’s face it. They’re also not some love child of the Purple People Eaters and the Steel Curtain. If Oklahoma State’s and Iowa State’s defenses looked like world beaters these past six quarters, it’s because Baylor helped them out in auditioning for the part.

"Getting home tonight, putting on the tape, making the corrections, I think there's things coaching wise we can certainly correct," Aranda said. "I think there's things offensively, defensively and special teams we've got to address, and then getting better. I think this is a defining moment in terms of where we go from here."

Everyone has a bad day, coaches included. That doesn’t mean they’re bad at their jobs. In Baylor’s case, it does mean they need to be a lot better next week, with West Virginia trekking into Waco for another Big 12 battle.

A coach can’t make a tackle. He can’t make a throw or a catch or a kick. All a coach can really do is put his players in the best position to do those things.

Ideally, coaches should set the players up for their best shot at a win.

On this day at least, Baylor’s coaches botched that assignment.

PHOTOS — The Baylor Bears couldn't weather the storm in Stillwater, falling to Oklahoma State, 24-14, for their first loss of the 2021 campaign.

Dave Aranda calls it competitive maturity, and he expects to see more of it from his Baylor football team as the season progresses.