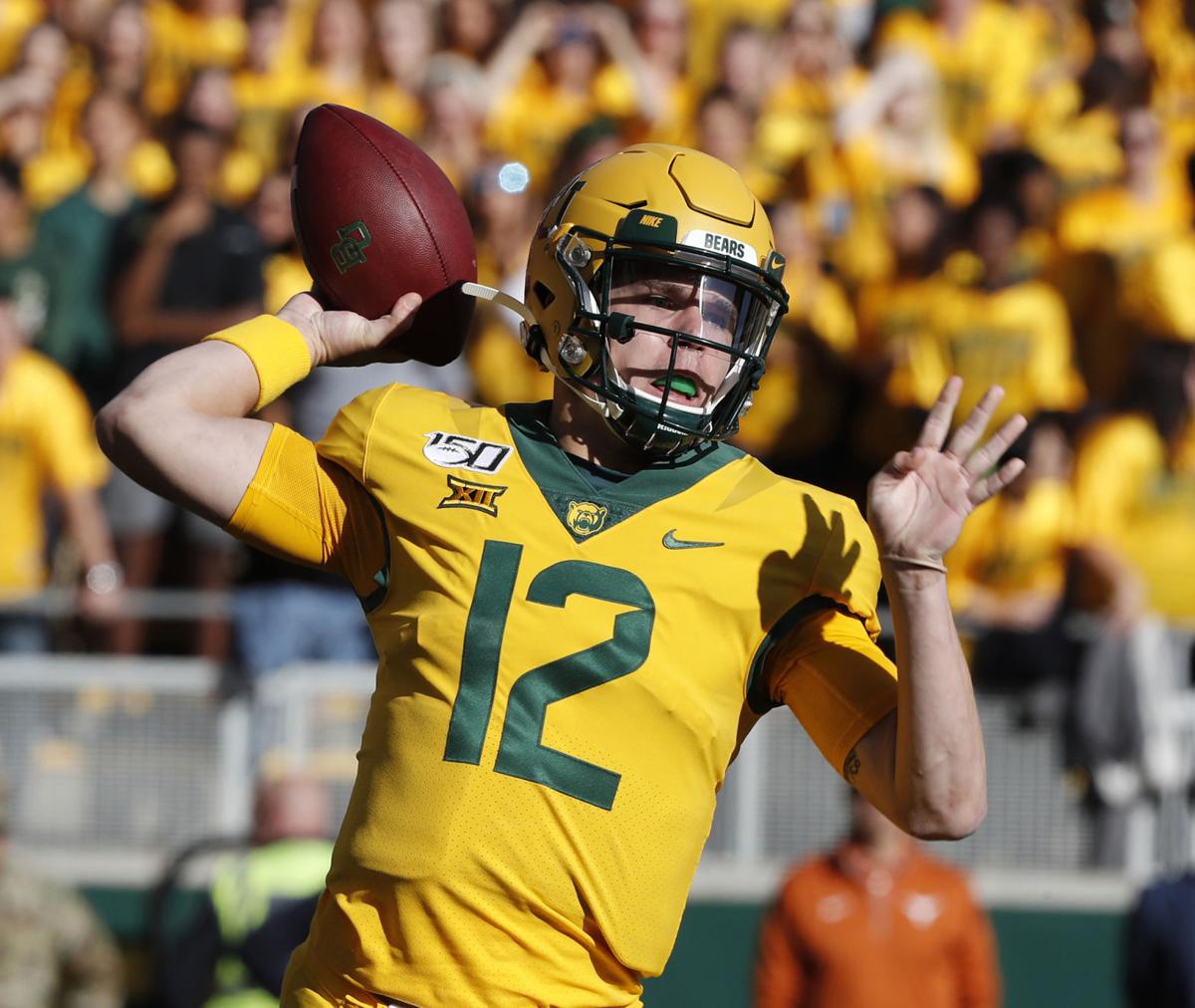 Baylor Bears quarterback Charlie Brewer (12) is excited to be playing this season, looking forward to running an up-tempo offense similar to the one he ran in high school at Lake Travis. 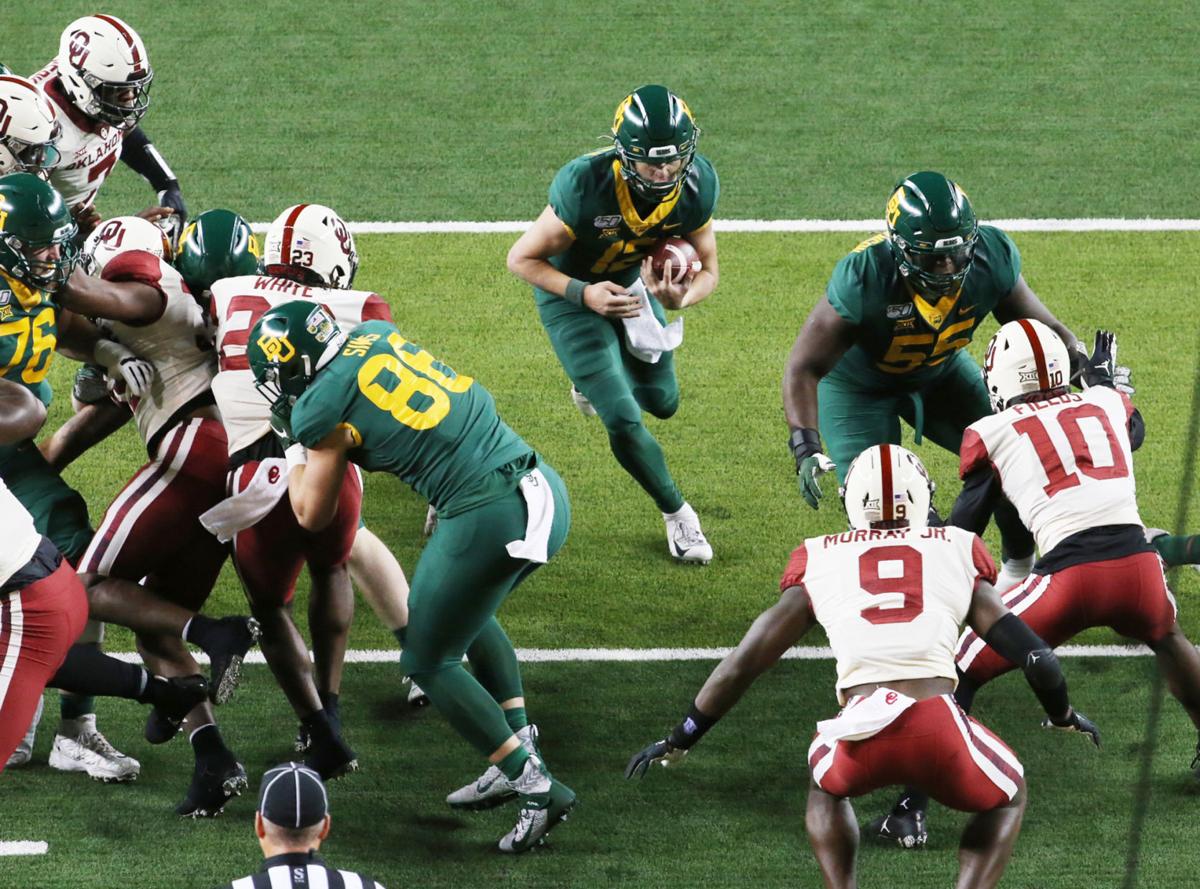 Baylor quarterback Charlie Brewer, center, likes the experience surrounding him on offense with talented running backs and receivers, as well as a more experienced offensive line. 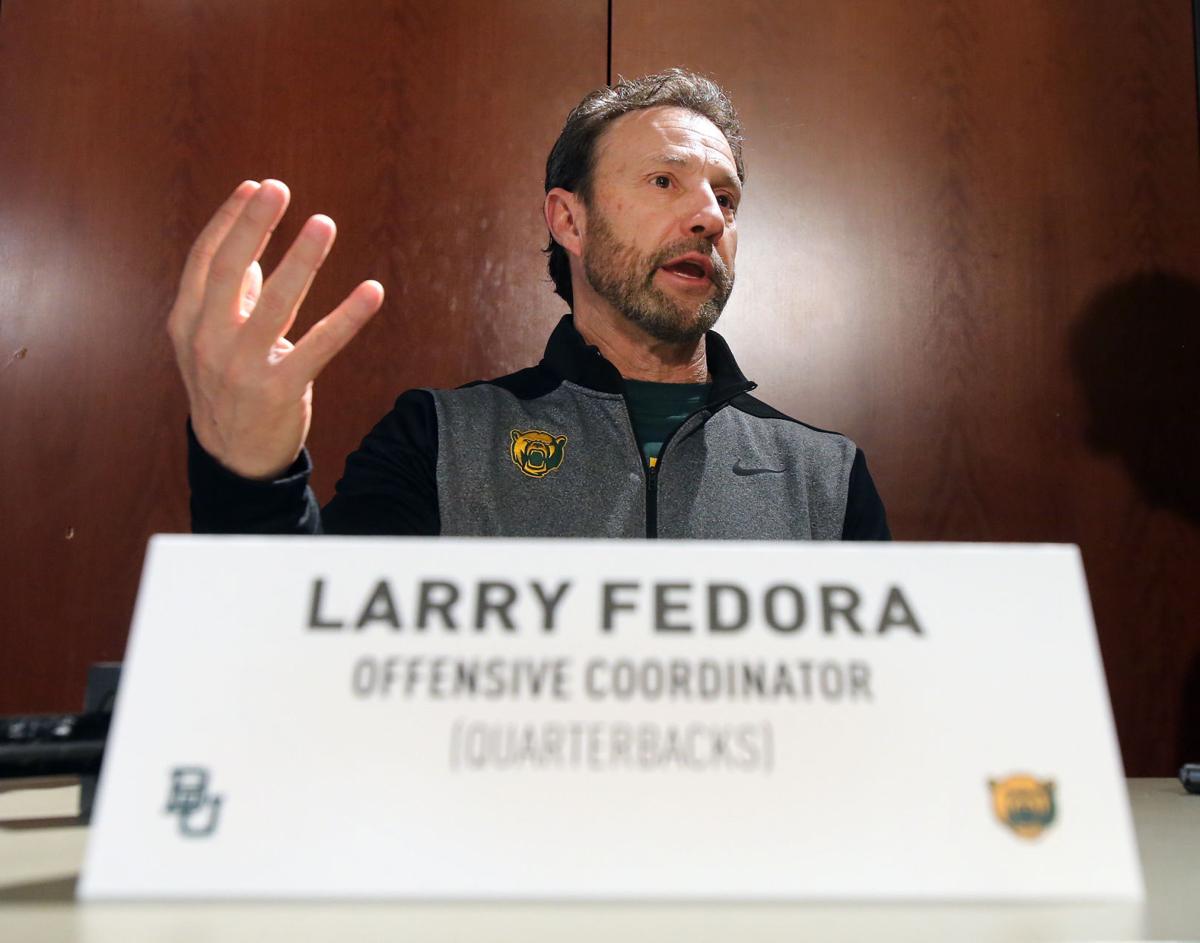 Offensive coordinator Larry Fedora says the offense needs to pick up the offense more quickly, saying they’re about where they would be in the fourth day of spring football.

Baylor senior quarterback Charlie Brewer and his teammates got a reprieve when the Big 12 decided to keep playing football Tuesday night after the Big Ten and Pac-12 canceled their seasons due to COVID-19 concerns.

Brewer wants to make the most of his last college season, and can’t wait to run out of the McLane Stadium tunnel for the opening game.

“We’re obviously very excited that we’re going to be able to play football this fall,” Brewer said. “I know that all my teammates are excited and I know the coaches are too. Now we can kind of take a deep breath and get ready for the first game.”

Baylor hasn’t yet announced its lone nonconference opponent on its 10-game schedule before opening Big 12 play against Kansas on Sept. 26. But it won’t be previously scheduled Incarnate Word since the Southland Conference canceled football this fall.

Baylor first-year offensive coordinator Larry Fedora knows the clock is ticking regardless of which team the Bears play in a month. After spring football was canceled following the coronavirus outbreak, Fedora believes Baylor’s offense has a lot of ground to make up.

“I think it was on our second day of fall camp, I came off the field and I felt like you know what? That’s where we ought to be after the third or fourth day of spring ball,” Fedora said. “We’ve got a lot to make up. We’ve had to think outside the box in the way you plan your practice, what you’re going to practice, your installation, and how that’s going to look.”

But Fedora is thrilled to have a quarterback as experienced as Brewer guiding the offense. In three seasons at Baylor, Brewer has completed 64.1 percent of his passes for 7,531 yards and 51 touchdowns while rushing for 18 scores.

Last season, Brewer led the Bears to an 11-3 record and a Sugar Bowl appearance as he threw for 3,161 yards and 21 scores.

“Whether it’s on Zoom or now when we’re actually getting to meet, the thing that I can tell you is football is extremely important to him,” Fedora said. “He is concerned about every detail of what we’re doing and why we’re doing it and what other guys are doing within the concept, so that he has a good grasp of it. He’s got great football savvy. He understands the game of football.”

Brewer is looking forward to running Fedora’s up-tempo offense since it’s similar to the scheme he played in at Lake Travis High School.

“We’re going to play with a lot of tempo, we’re going to play fast,” Brewer said. “The ball is going to be out of my hand quickly. We’re still going to establish a run game as well as take a lot of shots down the field. So I think you’re going to see some fast tempo and a lot of big plays. We’ve got the guys who can do it and I think we’ve got the system that will allow us to do that.”

Brewer likes the experience surrounding him like running backs Trestan Ebner and John Lovett and receivers Tyquan Thornton, R.J. Sneed and Josh Fleeks. He believes senior receiver Jared Atkinson is going to make an impact and expects a strong contribution from Gavin Holmes, who has missed the last two seasons with injuries.

“We’ve got a strong group of receivers,” Brewer said. “Gavin Holmes has been out the past two years but is really looking healthy and really looking good. I think that’s a guy who is really going to come on the scene. Jared Atkinson going into his senior year has been making some big catches.”

One of the biggest keys for the Bears this season will be keeping Brewer healthy after he didn’t finish three of Baylor’s last four games last year due to head and neck injuries.

The offensive line is seeking improvement after allowing a Big 12-high 38 sacks, but Brewer believes he can protect himself better by getting the ball out of his hand quicker and avoiding big hits.

“Obviously, I could be smarter at times and go out of bounds or slide and not take the hit,” Brewer said. “I’ve probably heard that a million times now.”

“The thing I’ve noticed with Gerry is I was pleasantly surprised is he processes things very well and very quickly,” Fedora said. “Jacob, I think, is picking the offense up as well. Shapen is probably the farthest behind mentally, he’s a true freshman. And when I say mentally, I just mean picking up the offense. But he’s talented now, he can spin it up. He’s got great feet and he can get the ball out extremely quick.”

Dealing with coronavirus issues, Fedora believes the coaches have to find creative ways to work with the players and understand the strain that they’ve endured as they’ve had to adapt to the ever-changing landscape.

“There’s never been a class of kids or a group of kids that has ever dealt with anything like this in the history of the game that I know of,” Fedora said. “That’s why we have to do a great job of thinking outside the box because the mental strain on them has been very difficult. Just in the last few days, finding out that we really are going to play football. So there’s been a big strain on them mentally and there’s no way for them to get out from under that strain.”

All it took was one tweet for the beast to be unleashed in Baylor senior forward Mark Vital.

Back in rhythm on the road: Baylor Lady Bears thump Oklahoma State, 77-58

STILLWATER, Okla. — Like Willie Nelson, the Baylor Lady Bears got back in rhythm on the road again.

The Baylor softball team has begun workouts for the 2021 season, but the recent death of former assistant coach Mark Lumley is still heavy on …

Baylor Bears quarterback Charlie Brewer (12) is excited to be playing this season, looking forward to running an up-tempo offense similar to the one he ran in high school at Lake Travis.

Baylor quarterback Charlie Brewer, center, likes the experience surrounding him on offense with talented running backs and receivers, as well as a more experienced offensive line.

Offensive coordinator Larry Fedora says the offense needs to pick up the offense more quickly, saying they’re about where they would be in the fourth day of spring football.