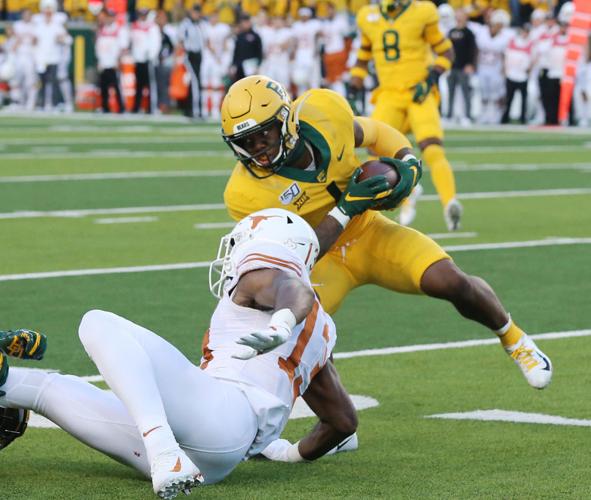 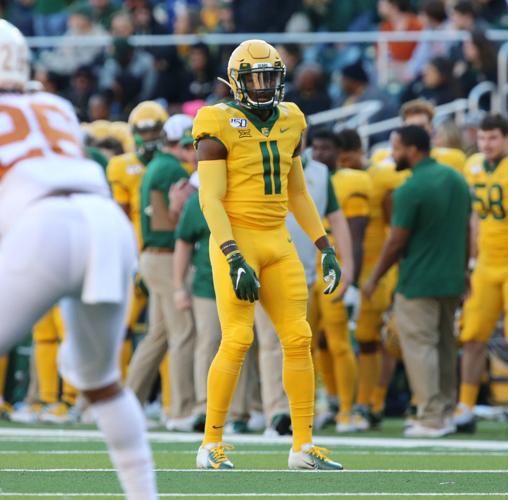 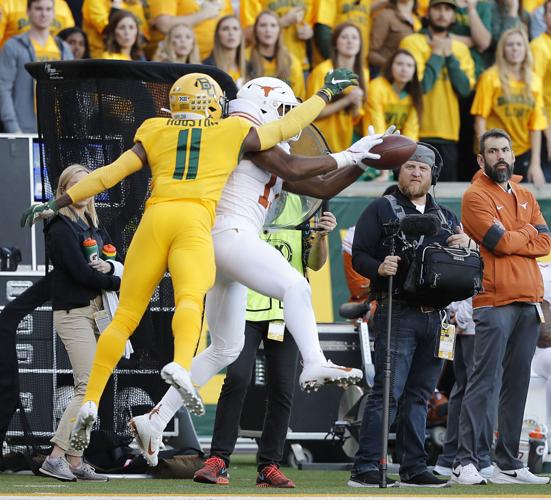 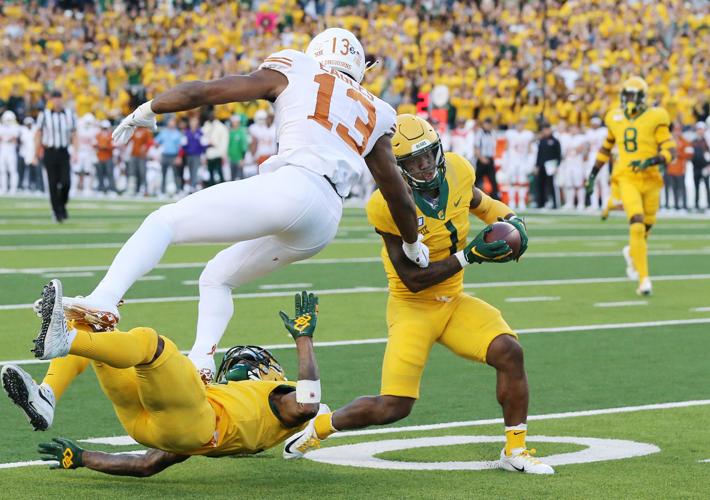 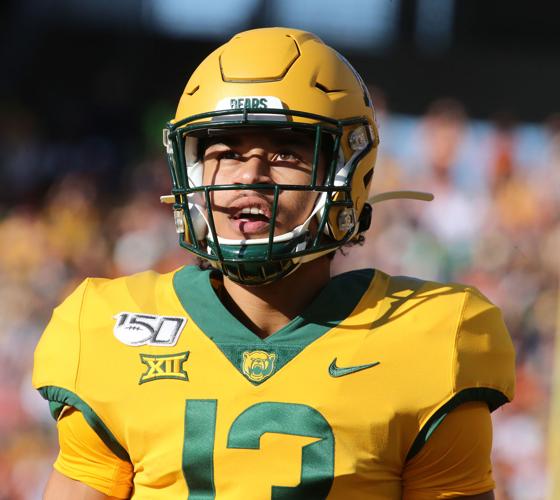 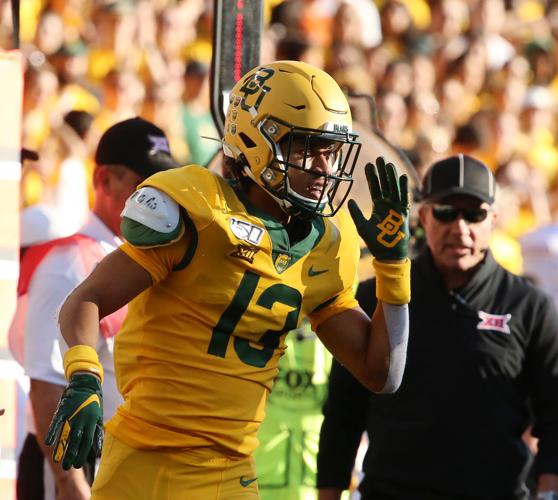 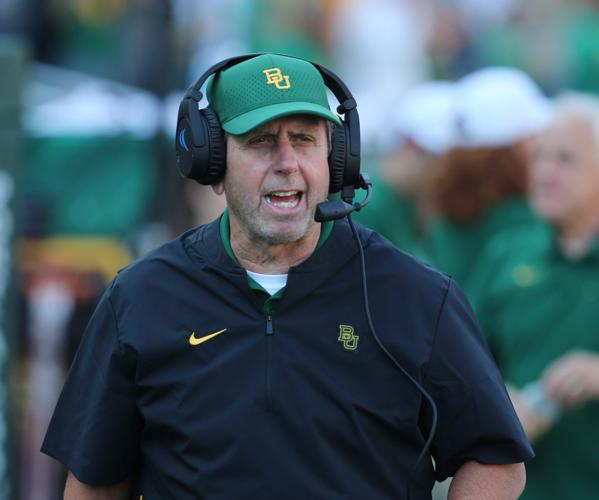 Let’s measure a bit of growth by telling the story of three plays.

2017, Baylor vs. Oklahoma: It’s 2nd-and-10, Sooners, from the OU 22-yard-line after the Bears stopped Abdul Adams for no gain on first down. On the second-down play, OU quarterback Baker Mayfield drops back and spots CeeDee Lamb running free over the middle, and Lamb sprints for 47 yards before BU’s Verkedric Vaughns brings him down. Three plays later, the Sooners punch it in for a touchdown.

2018, Baylor at Oklahoma: It’s 3rd-and-6, Sooners, from the Sooners’ 14, early in the third quarter. Baylor sends five defenders on the pass rush, but they’re picked up well by the OU blockers. Kyler Murray spots Lamb running a shallow crossing route, and a pair of defenders in the middle of the field are slow to react. Lamb catches the ball at the 15 without a tackler within 10 yards of him. As Lamb angles toward the sideline and up the field, Baylor’s Chris Miller is the only BU defender with a decent shot at him, but Miller gives a forearm shiver to a Sooner blocker instead of trying to elude the block and dive at Lamb, who motors all the way for an 86-yard touchdown.

2019, Baylor vs. Oklahoma: It’s 3rd-and-11, Sooners, from the Baylor 36-yard-line. Baylor rushes five, and gets good pressure on the edge, but ultimately Jalen Hurts has a clean pocket from which to throw. He fires a pass toward the OU sideline, and Baylor senior Grayland Arnold reads it perfectly. He breaks on the ball and steps in front of the receiver for the pick, then runs it back 71 yards the other way before Hurts pushes him out of bounds.

Now, you can’t tell the entire life story of the Baylor secondary in only three plays. But they do speak to an ongoing growth spurt that looks increasingly more striking by the day. In the three-year reign of Matt Rhule and Phil Snow, no position group has arguably witnessed more progress than the defensive backs.

“We lost our two starting corners last year,” Rhule said. “Grayland makes the move from corner to safety. It’s a lot of the same guys, but they’ve really grown and matured.”

Some of it can be traced to just a natural pace of development. Two seasons ago, the likes of Arnold, Chris Miller and Henry Black were still underclassmen. They had a lot to learn. Some of those lessons were learned the hard way, as they tried to chase down receivers from behind.

But they’re stronger, smarter and more experienced now. Arnold and Raleigh Texada are fourth-year juniors, Black, Miller and Jameson Houston are all seniors. You’d better believe that makes a difference.

“In general, our defense has taken a step because they’re more comfortable and more confident, and know what they’re doing,” said cornerbacks coach Evan Cooper. “This is Year Three for us now and they know what we expect. The biggest thing is what they expect out of themselves. We have a culture of defense. Some of the things we tried to implement the first two years have caught on this year and are no longer coach-driven, it’s player-driven.”

That may be true. But for a long time, the coaches had to drive the bus. Rhule said that he has noticed that as the Bears have progressively increased their win totals, he personally has received a lot of credit. But that’s not fair to everyone else who has put in the work, Rhule said.

“I stand up here and people say good things about me when we win, but this year has been about Phil Snow, it’s been about Evan Cooper, Mike Siravo, Frank (Okam), the job they have done on defense, transforming what we do on defense. And it’s been about the players,” Rhule said. “The players on defense have really grown and become good players.”

Indeed, Houston has emerged as one of the best lock-down corners in the Big 12. At safety, Arnold is a big play waiting to happen. His five interceptions this season are the program’s most since Orion Stewart had six in 2016. Black (45 tackles, four pass break-ups), Miller (50 tackles, two forced fumbles), Texada (33 tackles, five pass break-ups) and speedy sophomore Kalon “Boogie” Barnes (five pass break-ups, one interception) have all shined at various moments.

Baylor’s switch to a 3-3-5 alignment pushed an extra defensive back onto the field, and it’s given the Bears an extra jolt of speed. But when coaches say it starts up front, they mean it.

You don’t have to dig deep to spot the direct pipeline from Baylor’s success in the secondary up to the big guys in the trenches. If Baylor’s three-man defensive front, aided by the linebackers, wasn’t applying the type of pressure on quarterbacks that it has, the defensive backs would have a much harder job.

Baylor has made 38 sacks on the year, which ranks first in the Big 12 and fifth nationally. Compare that to the previous two seasons, when the Bears produced 23 and 25 sacks, respectively. As jumps go, that’s like Blake Griffin hurdling a Kia in the dunk contest.

“It does help when you’ve got those front guys and the linebackers getting to the quarterback and having him get rid of the ball fast,” Cooper said. “But as a whole, the defense is playing the way we need to play.”

Here’s further proof of the maturation of Baylor’s secondary: in the Bears’ 24-10 win over Texas last weekend, Baylor played straight-up man defense on third down throughout the game. Rhule said that’s the most the Bears have ever rolled out that look.

It speaks to the trust that the DBs have earned.

“We’ve never really done that, and we said, you know what, we are going to try to evolve and be a better man-to-man team,” Rhule said. “You’ve got Jameson Houston out there playing bump-and-run on 3rd-and-5, 4th-and-5, and those guys came through. I think our secondary, the elimination of big plays and winning on third down has been as crucial to our success on defense as anything else.”

After finishing 1-11 in Rhule’s first season, the No. 11 Bears can reverse that record with a win over the Jayhawks to close the regular season.