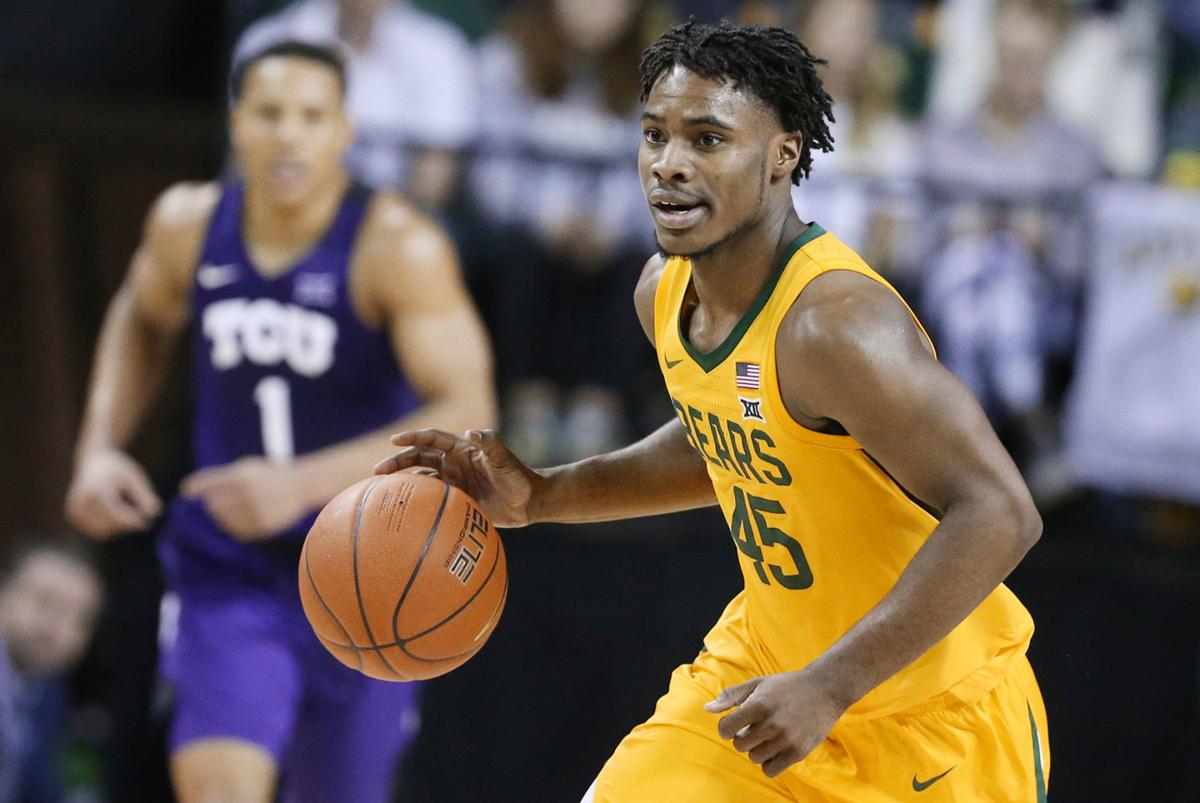 Baylor guard Davion Mitchell brings the ball up court against TCU in the second half. 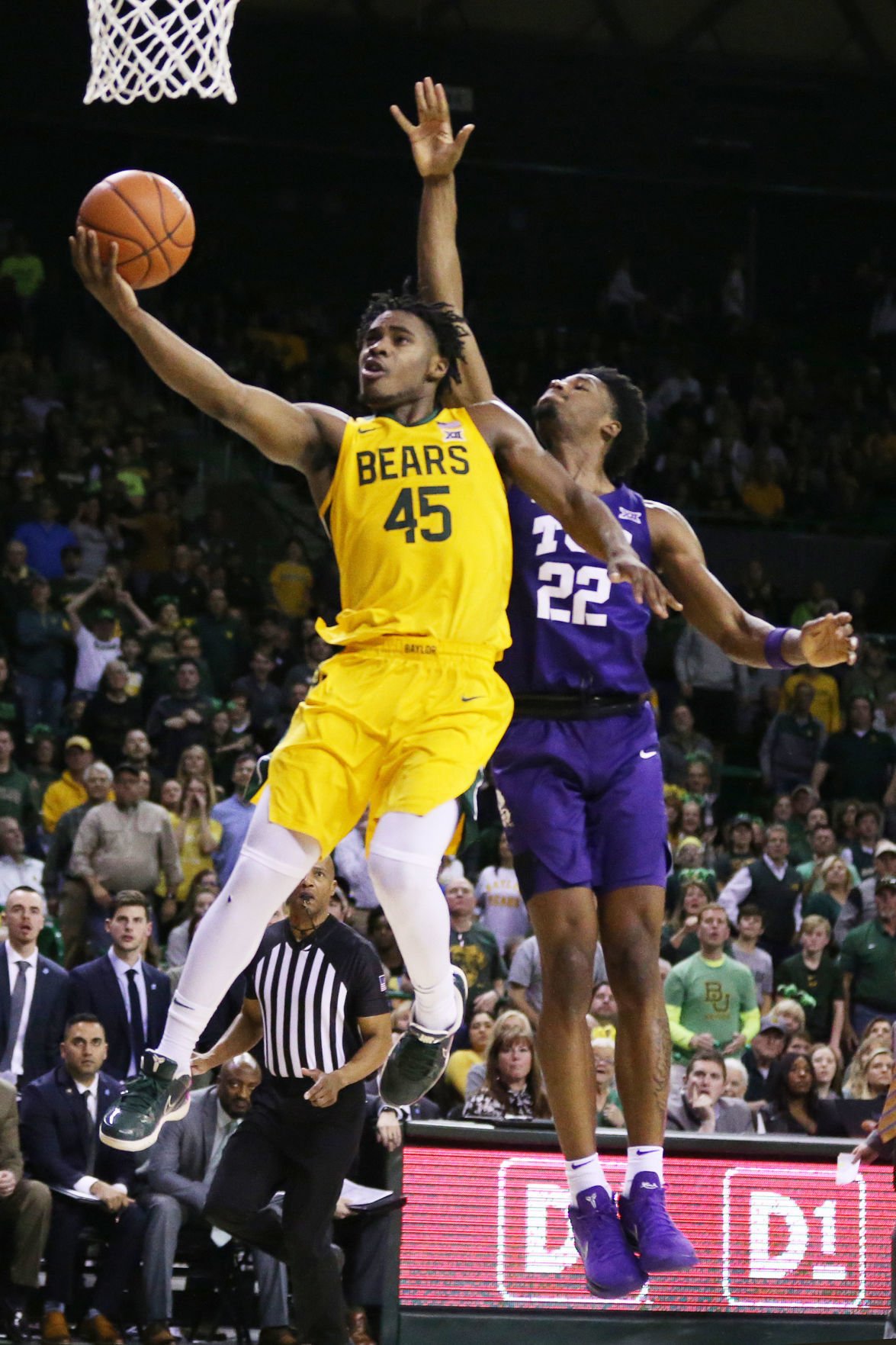 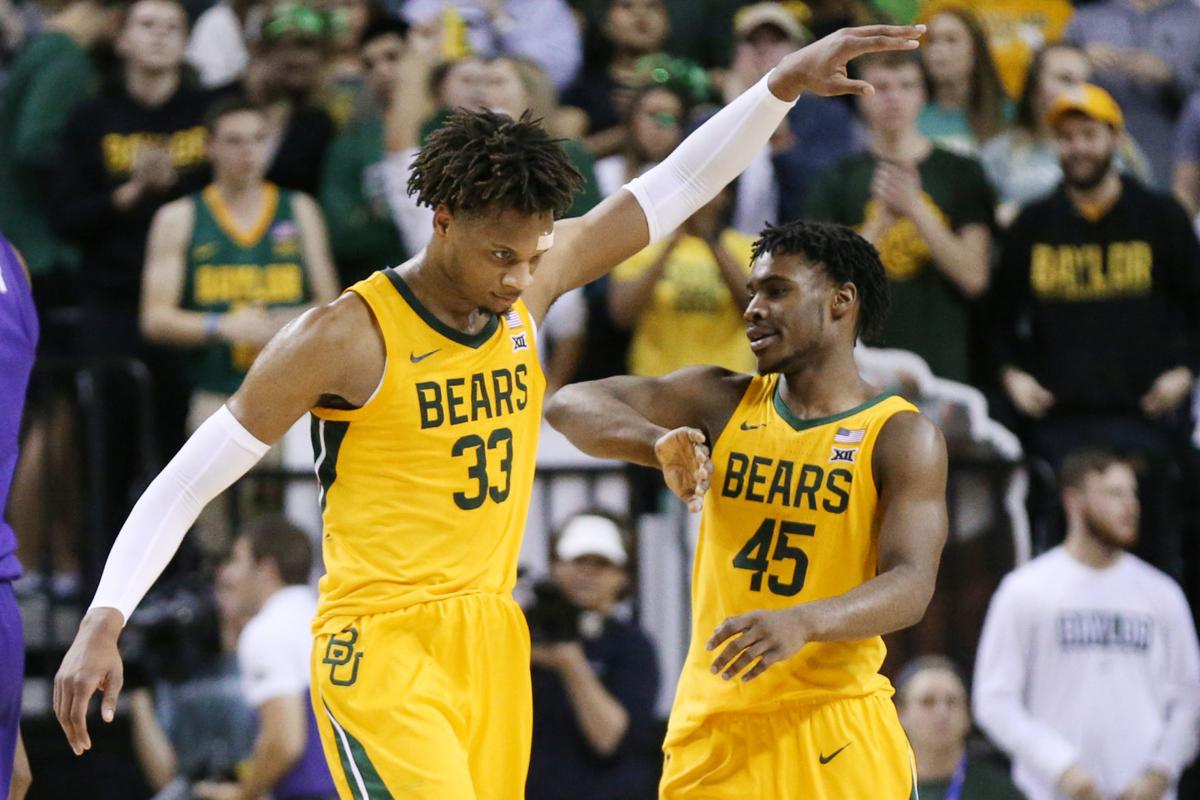 Baylor forward Freddie Gillespie, left, celebrates with Baylor guard Davion Mitchell, right, after a call against TCU in the second half.

Atlanta will be college basketball’s epicenter on the first weekend of April, and Mitchell wants to be there to play in the Final Four at Mercedes-Benz Stadium.

He grew up in Hinesville, a town of 33,000 near Georgia’s Atlantic coast, and can just imagine the excitement his family and friends will feel if No. 1 Baylor caps its remarkable season with its first Final Four berth in 70 years.

For a team that has been ranked No. 1 four straight weeks and is riding a school-record 21-game winning streak, it’s a realistic goal.

“Oh yeah, we talk about it,” Mitchell said. “We talk about it all the time. Even in the summertime when we ended our workouts, we used to say ‘1-2-3 Atlanta.’ We definitely can win the national championship.”

If the Bears reach the Final Four, it will be because Mitchell played a major role.

As Baylor’s starting point guard, Mitchell ignites the offense with his sharp passing skills, strong-willed drives to the basket and an outside shooting touch that has grown more accurate as the season has progressed.

With his strength and quickness, the 6-2, 195-pound Mitchell might be the best defensive point guard in the country. He’s a relentless defender who often frustrates opposing guards and ultimately wrecks teams’ offensive plans.

“He’s always hawking the ball the minute they get past midcourt and he starts applying ball pressure and it’s contagious,” said Baylor forward Freddie Gillespie. “I’ve seen dudes almost tap out because he’s relentless. He just doesn’t get tired. He doesn’t mind guarding the ball for the whole possession.”

Because of premier defensive players like Mitchell, Mark Vital and Gillespie, the Bears are tied for fourth nationally in scoring defense by allowing 58.3 points per game.

In Monday’s game in Austin, Texas had a shot to hand the Bears their first Big 12 loss as they struggled to score consistently. But the Longhorns couldn’t rally because Mitchell and his teammates kept throwing up road blocks to the basket.

Baylor pulled out a 52-45 win to stay unbeaten in the Big 12 at 11-0. The Longhorns scored their fewest points at the Frank Erwin Center in 37 years.

“The thing that’s best about them is Mitchell and Vital,” said Texas coach Shaka Smart. “Those guys are elite college basketball defenders and they have such a physicality about them. We got in the bonus relatively early in the second half and we’re telling our guys to drive, be aggressive, draw fouls. And Mitchell wasn’t having it. We wanted to drive on some of their other guys, but he found a way to just keep getting to the basketball.”

Scott Drew has coached several terrific defensive point guards at Baylor like Tweety Carter and A.J. Walton. But finding a guard with Mitchell’s combination of strength, quickness and desire to play lockdown defense is rare.

“Davion by the time he leaves Baylor has the chance to be the best,” Drew said. “He’s really developed into a great on-ball defender and he really prides himself on that. First of all, it’s his athleticism and then it’s his strength. He’s got a mental toughness and a desire to play defense. A lot of times he’s been back in transition defense, and plays that are normally layups or dunks he’s able to get deflections or charges or steals. He’s a one-man wrecking crew at times.”

Of course, Mitchell takes a lot of pride in his defense and knows he must set the tone with his aggressive play at the perimeter. It all comes down to energy and effort, and the third-year sophomore always seems to dig down deep and draw more from himself as the game progresses.

“I’ve always been one of the guys who would guard the best player, even when I was young,” Mitchell said. “I just try to make it hard for them. There are a lot of great point guards in the Big 12 and a lot of great players. I try to throw something at them that they’ve never seen before, that they don’t see every night.”

“He brings a sense of toughness,” Butler said. “He brings energy. He brings a lot of things you want on your team. He’s up front and making the guard panic and scramble and running offense from the halfcourt line. He’s a great teammate for sure.”

Offensively, Mitchell has become more effective as the season has unfolded. He’s averaging 9.8 points and a team-high 3.4 assists while shooting 32.9 percent from 3-point range. In Big 12 play, Mitchell has improved his 3-point percentage to 38.2.

Like all of his Baylor teammates, Mitchell plays unselfishly with the primary goal of distributing the ball to the player with the most open look at the basket.

“I just try to get my teammates easy shots, just creating for them,” Mitchell said. “I know I’m quicker than a lot of people, so I try to use that advantage to get my teammates’ shots. I kind of figured (outside shooting) was going to take some time. I had to keep believing in myself and believing in the work that I put in throughout the offseason. So I knew I was going to eventually start making them. I got off to a slow start, but I’m doing better now.”

Like Texas, Georgia is a football state and Mitchell played running back for his sixth grade team before focusing strictly on basketball. That didn’t stop the football coaches from trying to get this strong, athletic kid to come out for the team.

“Every year, they wanted me to come out,” Mitchell said. “From my ninth grade year to my 12th grade year, I always said no. When I got rid of football, I thought if I just keep working hard I’m going to get better and better at basketball.”

Mitchell starred at Liberty County High School in Hinesville as he averaged 24.2 points, 3.6 rebounds and 7.1 assists as a junior to lead his team to the Georgia Class 4A state championship. He came back as a senior to average 23.8 points, 5.3 rebounds and 5.2 assists.

He drew considerable attention from college coaches as he played AAU basketball for the Atlanta-based Georgia Stars. As a senior in 2017, he was ranked as the nation’s 33rd best player by 247Sports and 45th by Scout.

Mitchell chose Auburn and came off the bench as a freshman as he averaged 3.7 points and 1.9 assists for a team that won the SEC title and reached the second round of the 2018 NCAA tournament.

But with starting point guard Jared Harper returning for his junior year, Mitchell wanted a chance to start and decided to transfer. When he visited Baylor, he immediately recognized the family atmosphere created by the players and Drew’s coaching staff.

“What made me come to Baylor, when I visited here it was more like a family with the coaches and players,” Mitchell said. “They had high expectations of me, but they wanted to develop me to be a better person and not just a better basketball player.”

When Mitchell transferred to Baylor in the summer of 2018, he heard that high-scoring North Carolina-Asheville guard MaCio Teague was also looking for a place to transfer following a coaching change. Mitchell tracked down Teague’s phone number and convinced him to join him at Baylor.

Mitchell made the most of his redshirt season at Baylor as he constantly worked on improving his all-around game. He studied film on players he admired like Toronto Raptors guard Kyle Lowry and Dallas Mavericks guard Jalen Brunson, who was named the 2018 national player of the year for NCAA champion Villanova.

During practices, Mitchell gave a preview of things to come by hounding Baylor’s guards and making it tough for them to score.

“When I had to face him in practice, it was definitely difficult,” Butler said. “He’s probably the best defender I’ve ever faced in my life. I’m usually able to get by my man, but I couldn’t get by him. He’s allowed me to grow and I think I’ve helped him grow. It’s like an iron sharpens iron thing.”

But Mitchell isn’t all business. He keeps his teammates laughing with his funny remarks that often seem to come out of nowhere.

“He’s quick-witted and takes jabs at you that are humorous,” Gillespie said. “In the locker room, he’s always joking around. He’s always in a positive mood. He never comes in with a bad attitude. He always picks people up.”

Baylor’s guard quartet of Mitchell, Butler, Teague and Bandoo has played amazingly well together. Their versatility and unselfish play have been big reasons for Baylor’s success. As the Bears’ winning streak has grown and they’ve remained in the No. 1 spot, they’ve become bigger targets but they’ve handled the pressure well.

“We never actually talk about the winning streak in the locker room,” Mitchell said. “We’re definitely going to get everyone’s best shot. We prepare for it. Going in, we’re like they’re going to give us their best shot, so we try to give it our best shot.”

Final Four teams of recent vintage have often been led by uncompromising defenses and tremendous guard play. That was the case for 2019 national champion Virginia, which beat Texas Tech in the title game.

Mitchell believes Baylor fits the mold. While the Bears have done an uncanny job of grasping the details they must focus on to win each game, their big picture view includes a season-ending trip to Georgia.

“Even just watching the last few national championships, Virginia had three guards that play like point guards,” Mitchell said. “That can be us. Even Texas Tech last year, they played with guards. I think that can be us.”

Baylor guard Davion Mitchell brings the ball up court against TCU in the second half.

Baylor forward Freddie Gillespie, left, celebrates with Baylor guard Davion Mitchell, right, after a call against TCU in the second half.