US economy shrank in 2020 by largest amount in 74 years 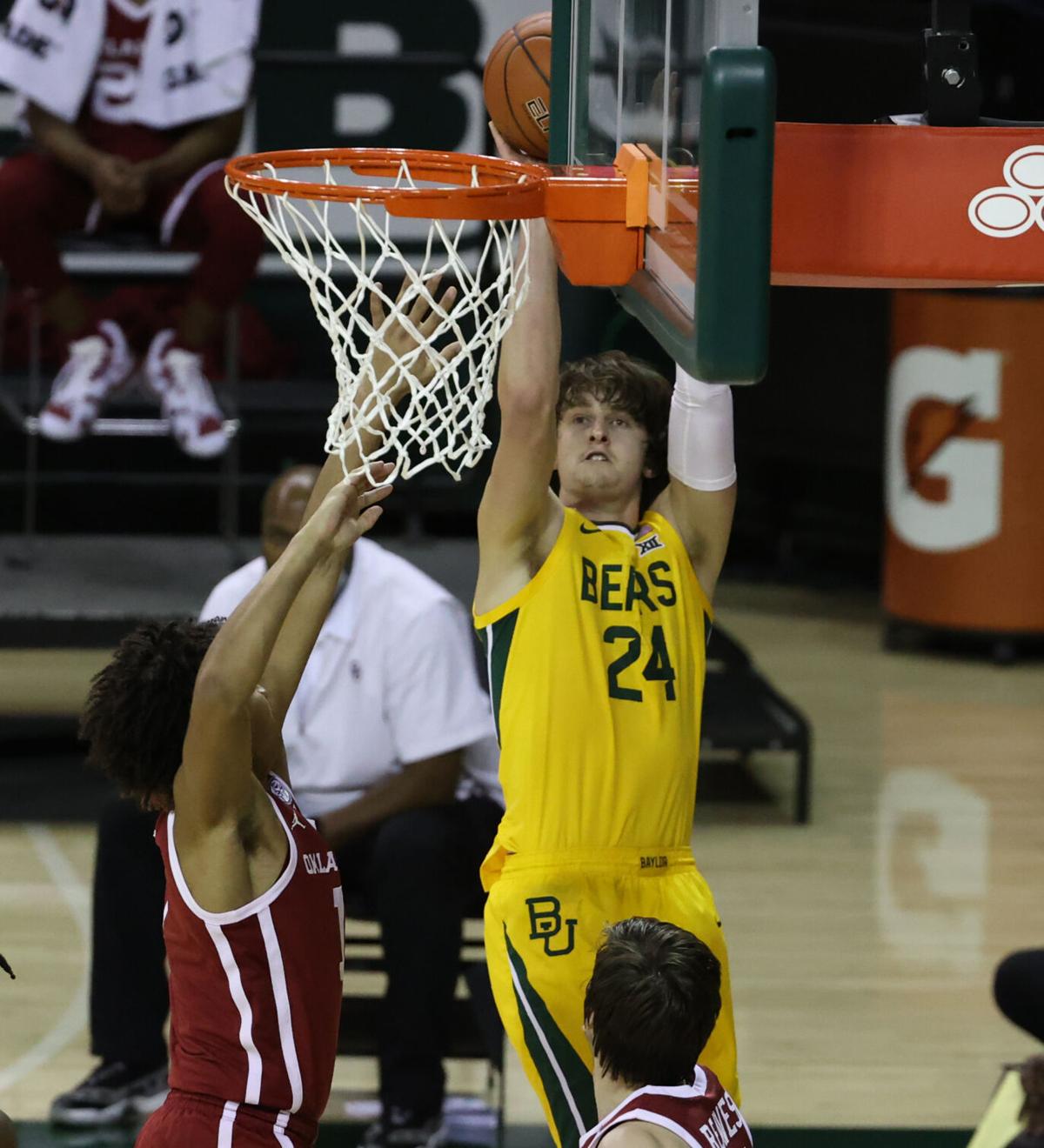 Baylor 6-foot-9 guard Matthew Mayer is one of the Bears’ most dynamic players, despite coming off the bench. 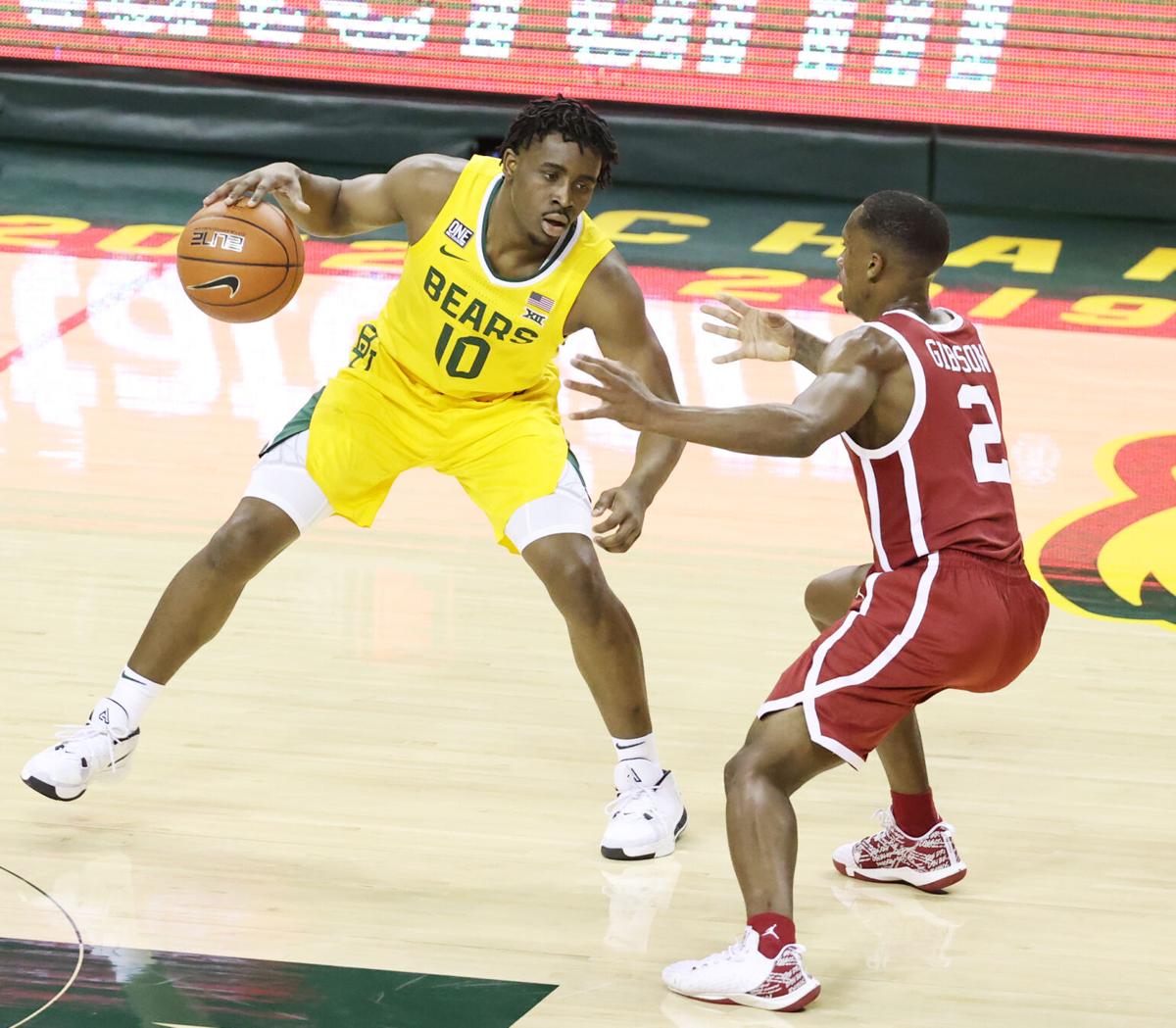 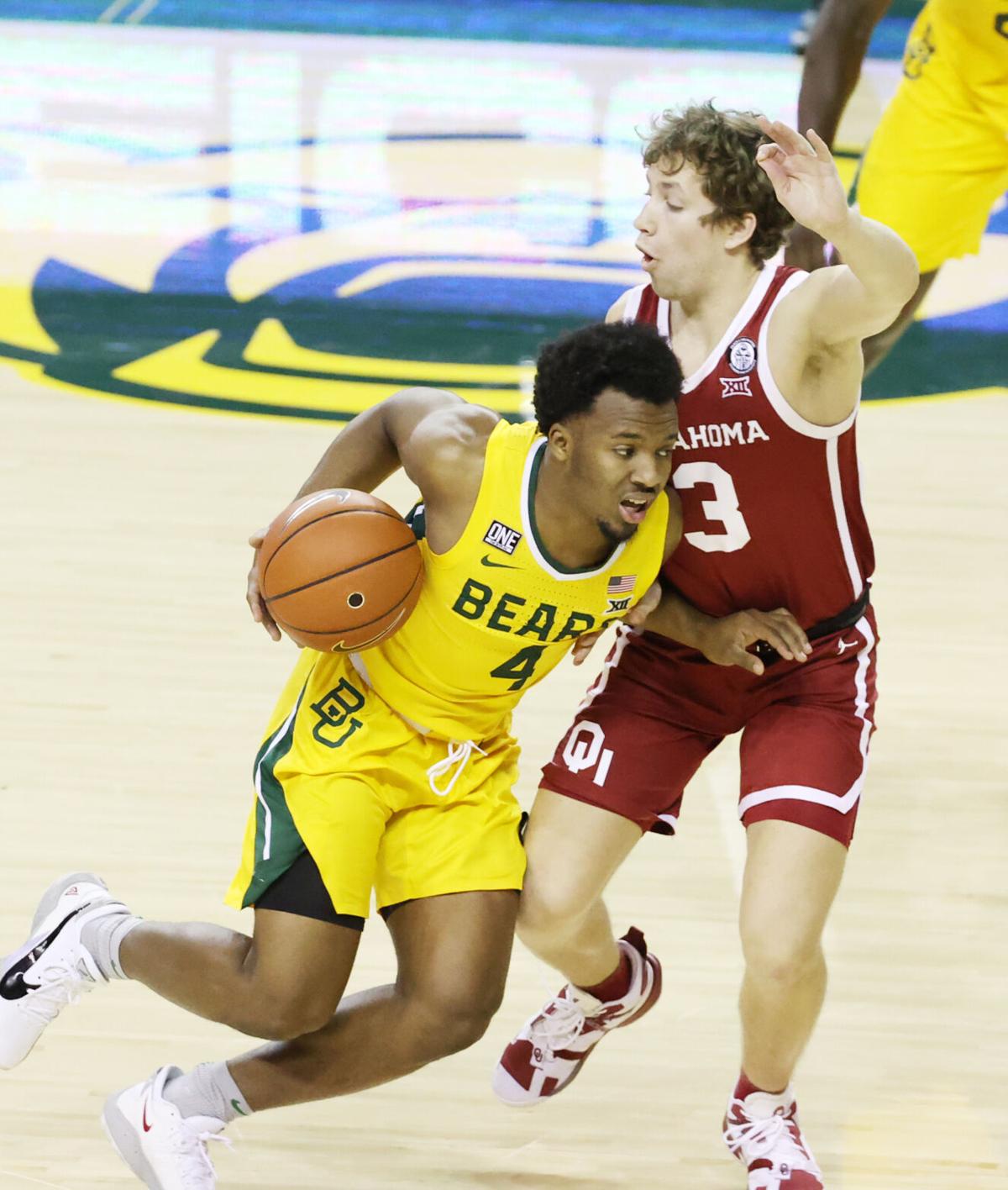 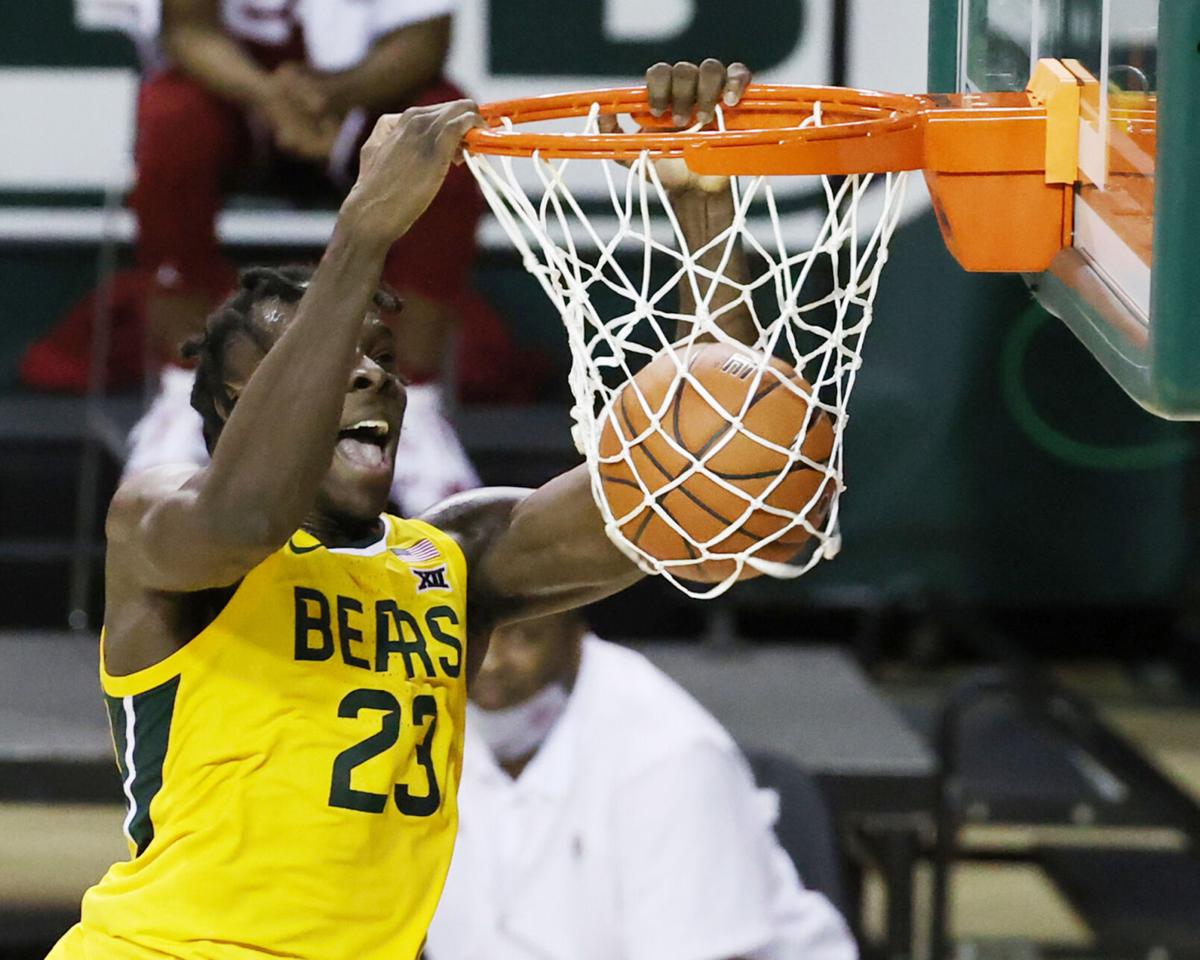 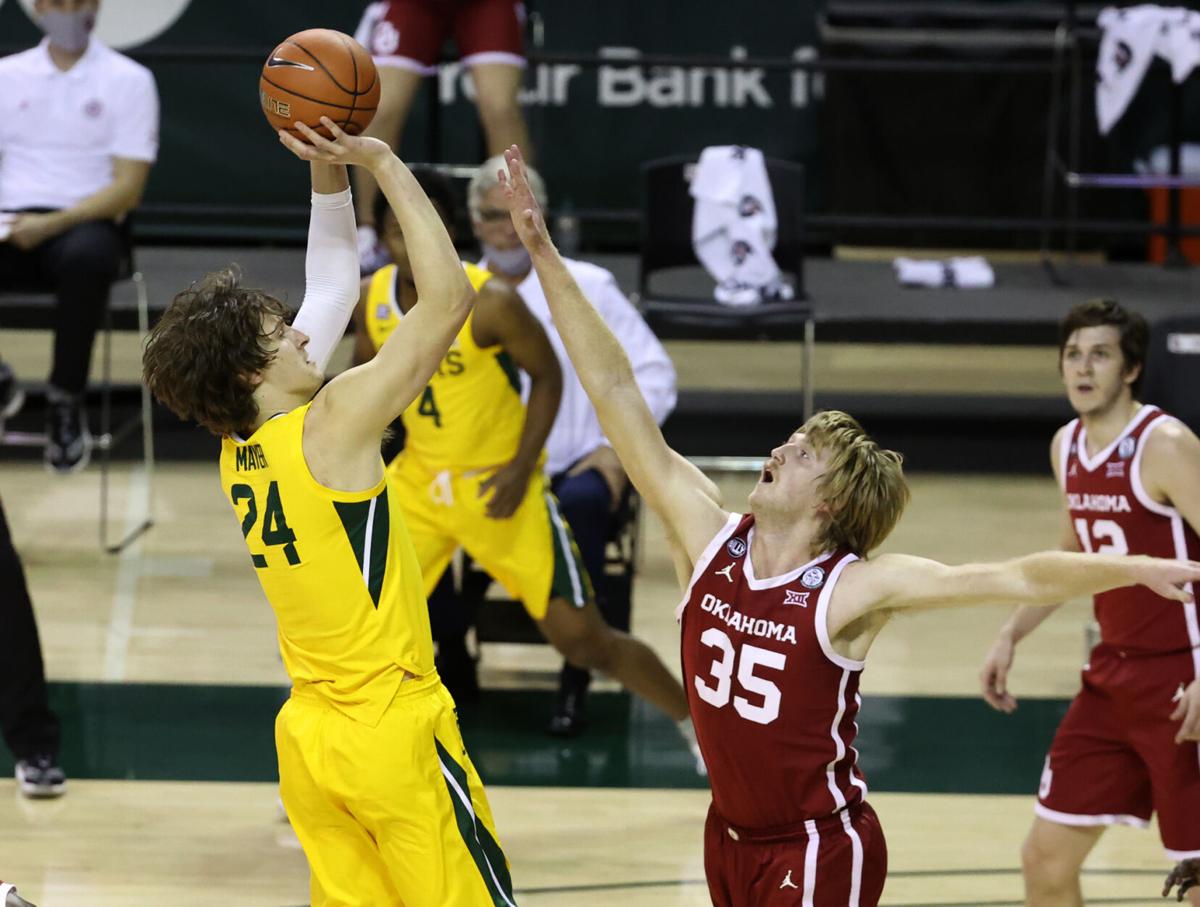 Baylor forward Matthew Mayer is a matchup nightmare with his 6-9 frame as he can score outside and inside.

Baylor boasts one of the most dynamic and gifted starting lineups in the country, but it’s that second wave that often brings opponents to their knees.

Led by forwards Jonathan Tchamwa Tchatchoua and Matthew Mayer and guards Adam Flagler and LJ Cryer, the bench has provided an astounding 43.1 percent of Baylor’s 91.2 points per game, which leads the Big 12 and ranks fifth nationally.

These guys would start for most teams, but their selfless attitude and production have helped the No. 2 Bears go 10-0 overall and open the Big 12 with a 3-0 record.

“We definitely pride ourselves on coming in and providing that spark,” Flagler said. “Whoever is coming off the bench, we just try to compete at a high level and give us an edge. It allows us all to be selfless out there and just play for each other. A lot of times it might be one guy who doesn’t have a good night, but we have a great team where we can all pick each other up.”

In Wednesday’s 76-61 win over Oklahoma, Baylor’s bench contributed 40 points as Mayer scored 16, Flagler 15, Tchamwa Tchatchoua six and Cryer three. The Bears’ bench sparked a 14-2 run to close the first half to open up a 42-25 halftime lead and the Sooners never threatened the rest of the game.

While the tough part of the schedule is yet to come, the Bears’ 28-point scoring margin leads the nation. Much of that credit goes to a bench that keeps producing even after the Bears have gained a comfortable lead.

Drew hopes the Bears can continue that trend as they delve deeper into the Big 12. Baylor faces a difficult schedule in the next two weeks beginning with Saturday’s game against TCU in Fort Worth followed by No. 14 West Virginia, No. 18 Texas Tech and No. 6 Kansas.

“It’s a luxury, but coaches know that there is no safe lead in the Big 12,” Drew said. “We’ve had big leads and lost them and been down big and come back. The tough thing is you fight human nature when you get a big lead. And you think and assume things are going to be easy, and in Big 12 play they’re not.”

The Bears’ bench is talented and versatile as each player brings something different to the court.

A sophomore transfer from UNLV, Tchamwa Tchatchoua has been a beast inside as he’s averaged 9.5 points to go along with his 7.6 rebounds. He’s shooting 65.5 percent from the field and 79.2 percent from the free throw line.

Nicknamed “Everyday Jon” because of the energy he brings to each game and practice, his house shaking dunks always fire up his teammates. That was evident against Oklahoma when the athletic 6-8 forward took an alley-oop pass from Jared Butler and rammed home a vicious slam to close the first half.

“The game’s slowed down for him, he’s a lot more confident, he catches balls a lot easier, he finishes a lot easier,” Drew said. “Again all that kind of goes down to experience. The other thing is his confidence is really growing, and I think the players’ confidence in him is growing.”

An extremely skilled player, Mayer has shown his potential since the moment he stepped on the floor for the Bears in 2018. But he often played out of control early in his career, sometimes taking wild shots and showing his inexperience defensively.

But he’s developed into a more complete player as a junior as he’s averaged 10 points and 3.8 rebounds while shooting 53.6 percent from the field and 47.8 percent from 3-point range.

“Matt’s a great kid, he’s got a great heart,” Drew said. “He’s somebody I think you’ve seen his basketball game mature from his freshman year to now, and mentally he’s done the same. None of us are where we want to be, that’s why each day we want to get better, we want to improve, but you can definitely see in his game he’s taking steps forward, and that mental part is a big reason for that, putting in the time, working on the right things, feeling more comfortable in what he needs to do.”

At 6-9, Mayer is a difficult matchup because he can take the ball inside or step outside and bury a 3-pointer. Mayer has improved dramatically defensively and has also become better at finding teammates for baskets and playing within the team framework. He’s produced some eye-popping numbers in just 15.4 minutes per game.

“My coaches help me figure out what’s most efficient for me,” Mayer said. “I’ve been working with our managers a lot on shooting and I’ve been doing post-ups recently. Just taking some of my pride out of it and listening to what they have to say. They’re not trying to make me not be aggressive, they just want me to be aggressive at the right times.”

Flagler showed his outside shooting range and scoring ability as a freshman at Presbyterian in 2018-19 by averaging 15.9 points and shooting 38.2 percent from 3-point range to win Big South freshman of the year.

After missing two games due to COVID-19 protocol and struggling in two games since his return, Flagler found his shooting groove against the Sooners by nailing three of five 3-pointers.

“My team has done a great job since I came back, encouraging me,” Flagler said. “My coaches always stayed on me and said go out and enjoy it and have fun, and the rest will take care of itself. They just always tell me to stay confident and that I belong here. They’ve done a great job of lifting me up every practice and every second of every game. It’s been paying off and it’s keeping me positive and keeping me humble.”

Clocking in at 17 minutes per game, Cryer has shown his potential as a freshman by averaging 7.3 points and shooting 45.2 percent beyond the arc.

Named the Houston Chronicle’s All-Greater Houston player of the year last season, Cryer averaged 34.2 points per game as a senior for Katy Morton Ranch. It’s been an adjustment for Cryer to play a support role as a freshman, but he understands that he’s surrounded by gifted teammates and is still learning the college game.

“I know I’m not going to get as many shot opportunities this year,” Cryer said. “In high school, I was the main guy, I had the ball in my hand the whole game. So it’s really just making the most of your opportunities when you do get the ball and just focusing more on the defensive end. That’s the little things that are going to help us get the win.”

Unbeaten Baylor men locked in at No. 2, play K-State tonight

The top two spots in the Associated Press men’s basketball poll have been frozen since the start of the season: No. 1 Gonzaga, No. 2 Baylor.

In early February of 2019, Moon Ursin popped off and scored 20 points off the bench to help Baylor win at Texas on the Lady Bears’ road to Big…

Baylor 6-foot-9 guard Matthew Mayer is one of the Bears’ most dynamic players, despite coming off the bench.

Baylor forward Matthew Mayer is a matchup nightmare with his 6-9 frame as he can score outside and inside.