Whenever the Baylor women’s basketball team gathers together, it discusses more than the proper trajectory of a post entry pass or the intricacies of how to hedge on a screen.

Much of the year, when stop-the-presses news breaks, it becomes a topic of discussion in the locker room of Kim Mulkey’s team. The Lady Bears stay current on current events. They share their feelings, their thoughts, their opinions.

But when COVID-19 infiltrated the U.S. borders, the dynamic changed. Baylor’s players dispersed to their hometowns after the NCAA canceled March Madness. So when the country erupted in protests and demonstrations and sometimes riots following the killings by police of George Floyd in Minnesota and Breonna Taylor in Kentucky, the Baylor players couldn’t process it as usual. They were separated. Isolated. Mulkey couldn’t engage with them like she normally would. It’s not the same on a FaceTime call or Zoom meeting, the coach said.

“We are used to being in a locker room and talking about things when they surface in society,” Mulkey said. “I can see their eyes, they can see me, we can laugh, we can cry, we can hug. You can’t do that through a device.”

Given that her team is predominantly comprised of young Black women, Mulkey sensed that whenever they reunited again it would be important to talk about those issues of police, race and social justice. At first, she didn’t know how that conversation would unfold.

Then she thought of Chelsea.

Longtime Baylor fans will recall Chelsea Whitaker as the heady floor general for the Lady Bears’ first NCAA title team in 2005. Two years after she graduated, Whitaker joined the Dallas Police Department. She worked her way up to detective and continues to serve in that capacity, even while pursuing her law degree, with an aspiration of one day becoming a judge.

Chelsea would have something to say about all this, Mulkey thought. Something profound.

“Whenever all of it started becoming real prevalent, I just thought of Chelsea,” Mulkey said. “I thought of her as a police officer first, a former player, and then a young Black female. I thought, ‘You know, I bet she would have some great message to share, not just with the girls, but with all of us.’ I just kept that in the back of the mind.”

Still, Mulkey was hesitant to ask Whitaker to address her team. In her 21 years as Baylor’s head coach, she’d brought in someone from outside the program to speak only once. That came in 2005, when she asked former BU football coach Grant Teaff to deliver a pregame address, and he spoke about the Biblical story of David and Goliath.

Finally, this summer when the Lady Bears gathered to start working out again, the coach broached the subject with her team.

“I just casually asked the team after a workout if they thought it would be a good idea for her to come talk,” Mulkey said. “They don’t know her, they just know what I told them, a former point guard, won a national championship. And they said yes.”

She commissioned assistant coach Jennifer Roberts to connect with Whitaker and ask her to speak with the team. Whitaker agreed, under two conditions. One, that the team get the day off from workouts, and two, that she be given four hours in which to speak. “I’ve got a lot of ground to cover,” Whitaker told Roberts.

It took more than a month for Whitaker to find a free day in her schedule. But two weekends ago, she returned to Waco and met the Lady Bears at the Ferrell Center. A scheduled four-hour session ultimately spanned seven hours, as Whitaker provided a compelling history lesson about racism in America and its intersection with the criminal justice system.

“In so many ways, I can say it was a much-needed history lesson,” said senior guard DiDi Richards. “We started when the first slaves were brought over to America, and we ended with what’s happening today, with Breonna Taylor. If anyone had an opportunity to take that class, I think everyone should take it or want to take it.”

Again, Mulkey didn’t know what to expect. She knew Whitaker would have a unique perspective. She knew that her former point guard could connect with her current players. But she was blown away by the knowledge that Whitaker showed, the extent of subjects she covered, and the preparation she devoted to the endeavor.

Whitaker used a PowerPoint demonstration to accent her remarks, and brought along some of her police gear for further illustration.

“Her experiences are the same experiences that our young people struggle with right now, and she shared it with them. Her understanding of the law, her understanding of the history, how did we get to this point? Seven hours, it was powerful. And I just can tell you, there wasn’t anybody — coaches, trainers, players — that left there other than with their mouths open, like, that was awesome.”

Richards called the experience “eye-opening” and “enlightening.” She was shocked when the discussion turned to the cramped, miserable conditions on the passage boats that brought slaves to America, something she said she didn’t learn about in school.

“I never really thought about it until she came and taught the class,” Richards said. “Being a Black woman you kind of feel like you know everything that your ancestors went through. Then finding out you don’t, I feel like everybody — regardless of your gender, race, culture — needs to go back and see what happened in the world before we were born, and there are reasons why things are happening the way they are and why people are reacting the way they are. That’s what she kind of brought to the table. Everyone saw that and felt it.”

It wasn’t a one-sided discussion. Whitaker answered the players’ questions, and sometimes had them laughing with funny, behind-the-scenes stories of the lighter side of police work.

But she also gave insight into the dangers a police officer faces on a daily basis. She presented legal reasons for why a cop firing his or her gun can be warranted.

“It was enlightening to see that,” Richards said. “Her being a detective and a police officer, we got to see it from a different angle. I understand that not every police officer is dirty. It was cool seeing it from her point of view, why police officers get so upset and why they feel it’s a stereotype that they get labeled with. It was good for our team to see that, especially with the trying times that are going on right now.”

Over Mulkey’s tenure as head coach, the Lady Bears have engaged in all manner of team bonding activities. They’ve navigated their way through ropes courses, attended concerts together, gone snorkeling in the ocean on tropical road trips.

This was different. The class was meant to educate and inform, and yet Richards said that she and her teammates also drew closer through the experience.

“It’s not just black and white. Look at us being normal people and her being a police officer, you can look at from that standpoint,” Richards said. “I think it’s important for people to get uncomfortable and talk to somebody about a situation that they’re not really educated about.”

That was the point of the entire experience. Mulkey’s objective was to get the team talking, and that happened. Whitaker acted as the conduit. Mulkey said she was so impressed with her former point guard’s message that she has passed along Whitaker’s name to a speaking agency she’s worked with in the past.

“She educated every one of us in that room,” Mulkey said. “That doesn’t just go for student-athletes. She educated every adult in that room, Black, white, everybody. I just sat there as a proud coach going, ‘Wow, I got to coach that kid. Look where she is today.’ … I was blown away with how she reached everybody in that room. No matter what your feelings were, no matter what your emotions were. She put us in our place in understanding and being educated about things.

“We can’t quit talking about it, two weeks later, on things we think of that she said.”

Photos: Scenes from protests across the US after Breonna Taylor decision

There was no time for hesitation. 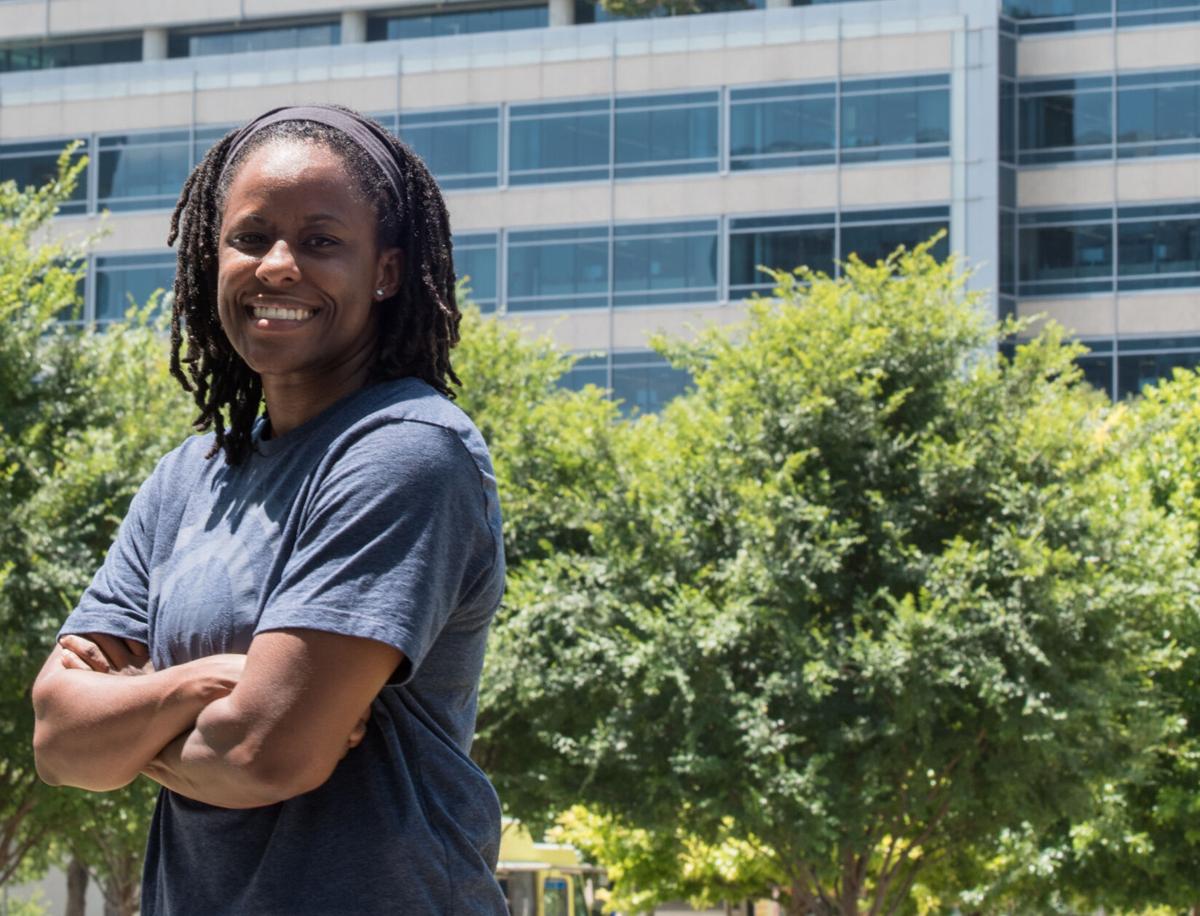 Chelsea Whitaker, former Baylor point guard who now serves as a Dallas police detective, recently returned back to campus to lead a discussion on America's racial history, the current racial climate and how it intersects with the criminal justice system. 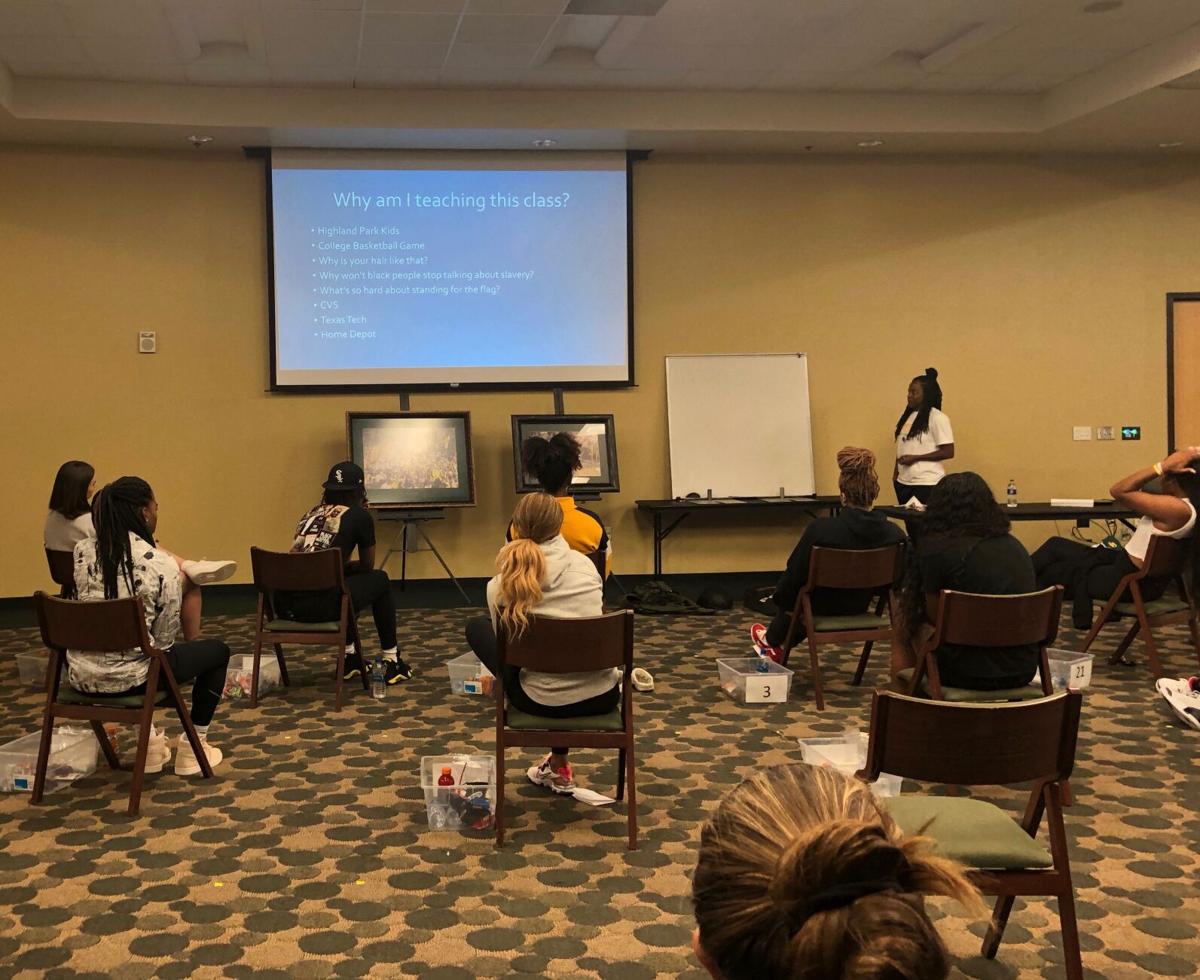 Former Baylor point guard Chelsea Whitaker's course on racism in America and its intersection with the criminal justice system was called "enlightening" by the Lady Bear team. "She covered it all," said head coach Kim Mulkey.

Chelsea Whitaker won an NCAA title in 2005 with the Lady Bears before joining the Dallas police department in 2007.