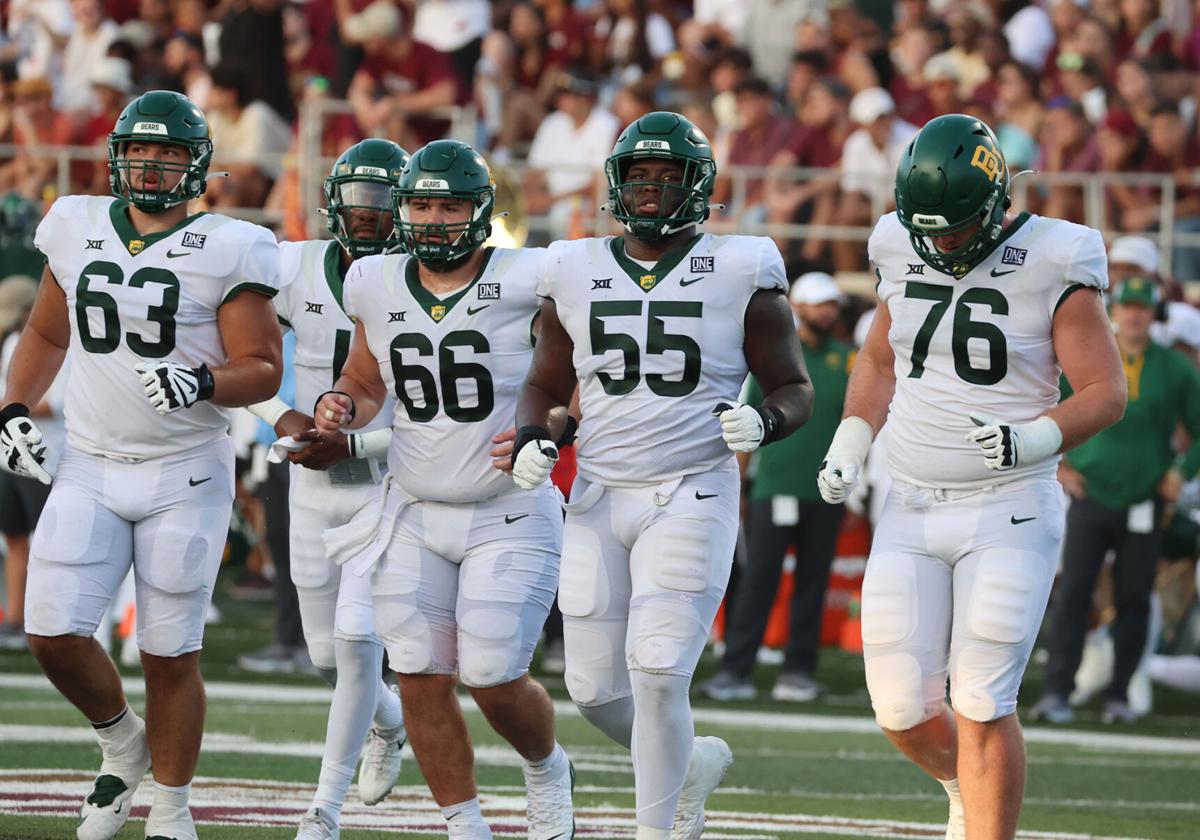 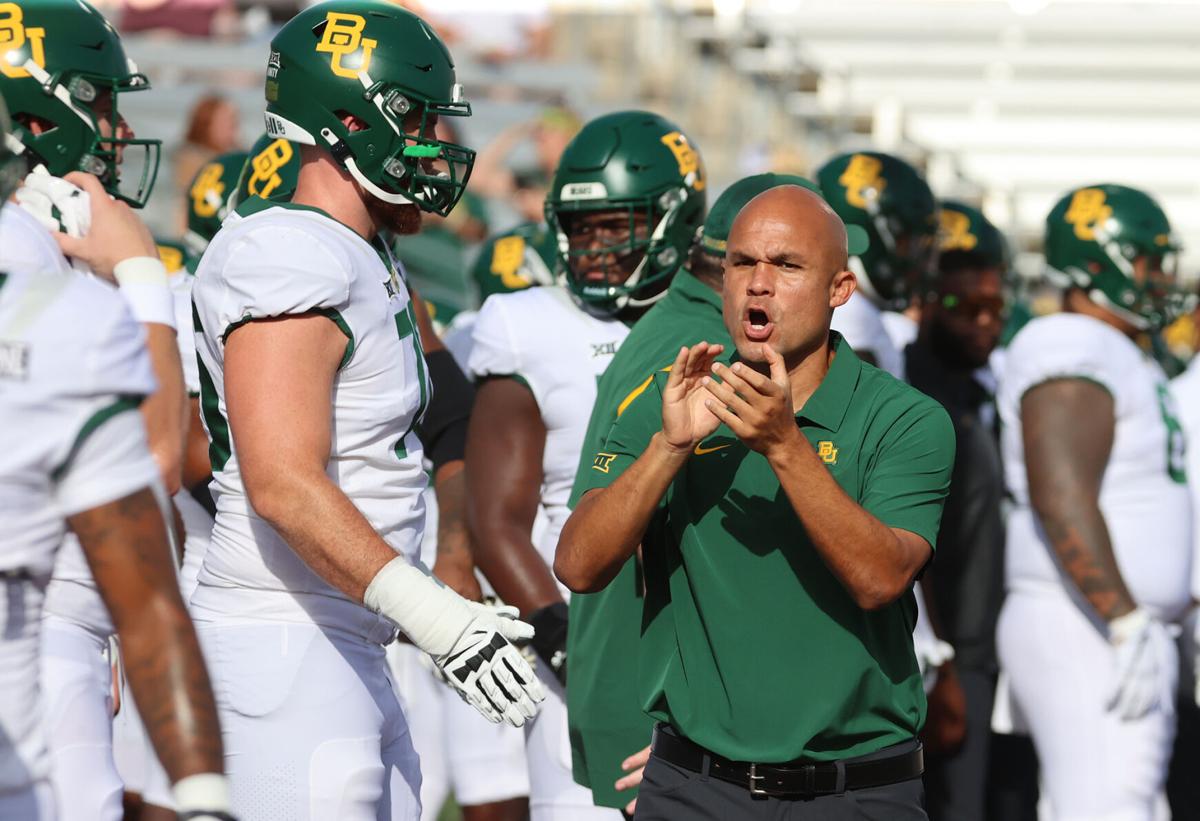 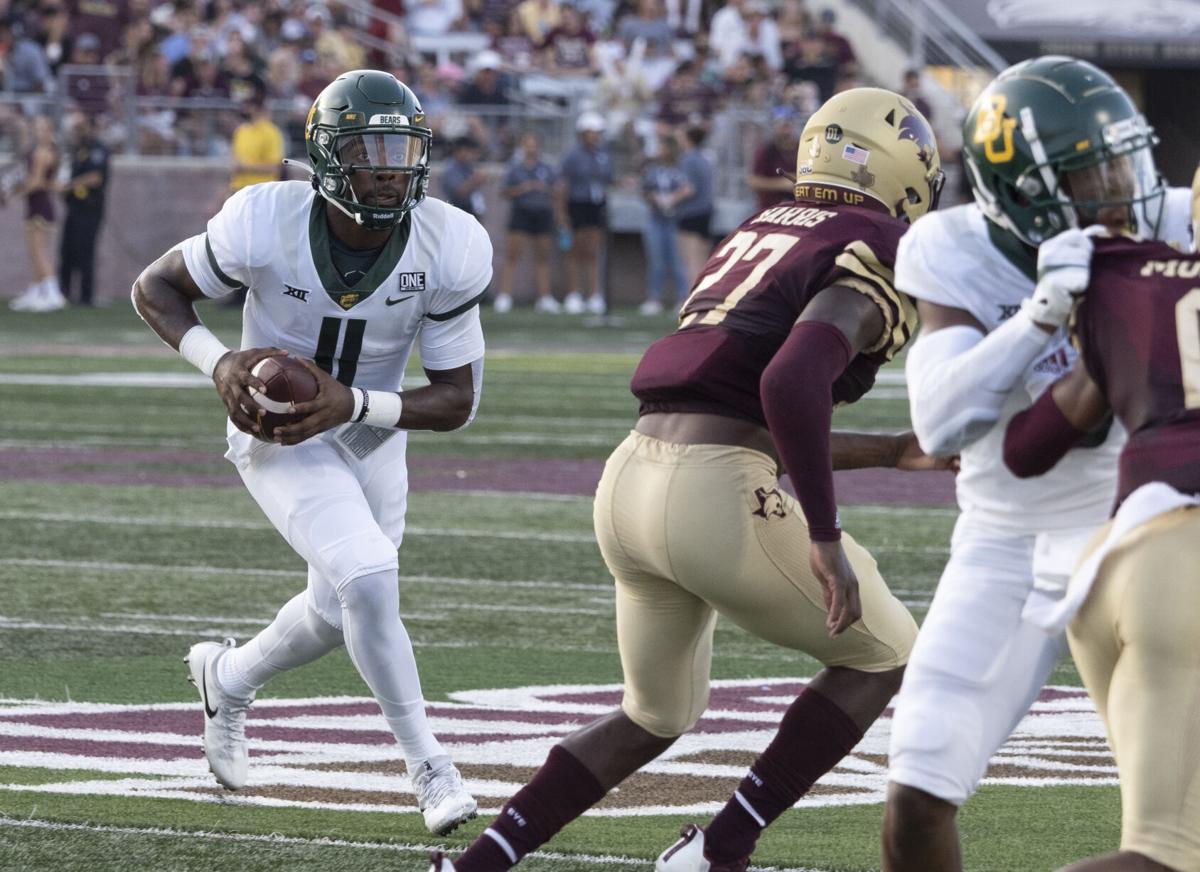 Baylor quarterback Gerry Bohanon was effective in his first start against Texas State as he hit 15 of 24 passes for 148 yards and showed command of the offense.

The paradigm is in place and Baylor coach Dave Aranda wants to follow that model the rest of the season.

From the opening kickoff Saturday in San Marcos, Baylor imposed its will against Texas State by pounding the ball with its running game.

The Bears were so successful with that approach that they produced two 100-yard rushers in a game for the first time since 2018 as Trestan Ebner amassed 120 yards on 20 carries and Abram Smith picked up 118 yards on 19 carries with a pair of touchdowns in the 29-20 win.

Expect the Bears to attempt more ground control in their home opener against Texas Southern at 6 p.m. Saturday at McLane Stadium.

“We want to be really good with our big people,” said Aranda at his Monday press conference. “We want our big people to lead. I think offensive line-wise, our ability to take the fight to the opponent and to keep kind of pounding the rock play after play and really wear them down, it will open up some of the boots (passes) that were opening up toward the end of the game. You want your big people doing the heavy lifting.”

A Baylor offensive line that has been much maligned for the last few years was highly effective against the Bobcats. Of course, the Bears will face stronger defensive lines when they plunge into the Big 12, but it was a promising start.

“I thought there was confidence, and that confidence grew as the game went on,” Aranda said. “In going around the locker room after the game, it was pretty measured. I think everyone felt good about the win but also knew we could have played a lot better. When I went over to the O-line section, they were very confident, very trusting of the scheme and of their teammates.”

They opened holes throughout the game, and Ebner and Smith complemented them by picking up some tough yardage on their own. It was an eye-opening performance after the Bears ranked last in the Big 12 with an anemic 90.3 yards rushing per game in 2020.

“Connor Galvin mentioned there was a point in the game that we didn’t know if it was last year’s group if we would have fought through,” Aranda said. “I didn’t really ask for that. It kind of shook me a little bit, but I’m glad he said it. I think things like that are little wins that are going to end up being big ones. We’ve just got to keep at it.”

Such a productive running game made fourth-year junior quarterback Gerry Bohanon’s first start a lot easier as he hit 15 of 24 passes for 148 yards.

Many of his passes were play-action and bootlegs. Though he showed considerable arm strength, most of his long passes were off-target.

“I thought there was good leadership with Gerry at quarterback,” Aranda said. “His calmness, his collective cool from the start to the finish helped the early part of the game when it was a little bit back and forth. I think his ability to manage that and being him and doing what he does was a positive.”

The offense produced three touchdowns while the defense was responsible for a touchdown on JT Woods’ 20-yard interception return early in the game and a safety on the last play of the game.

However, the Bears should have had another touchdown in the second quarter when Josh Fleeks got a foot down in the end zone on a 21-yard pass from Bohanon.

The official ruled he was out of bounds, and Baylor couldn’t challenge the call because the replay equipment wasn’t working.

“It was unfortunate,” Aranda said. “We started the game and our headsets were not working. I think we collected ourselves but we were kind of going crazy. We were able to handle it good after initially kind of diagnosing it.”

Though Fleeks wasn’t credited with the touchdown, he didn’t let the ruling affect his play the rest of the game.

“Way unfortunate for Fleeks,” Aranda said. “After that play, Fleeks doesn’t say anything, doesn’t complain. He just goes in and I think it was a perimeter screen or a perimeter run, and Fleeks gets his guy and drives him back six yards, which is way cool. In the bigger piece of it all, it might be a greater gift, so I’m proud of him.”

Freshman kicker Isaiah Hankins pulled a 40-yard field goal attempt on that drive but came back to nail a 43-yard field goal in the third quarter and a 26-yarder in the fourth quarter.

Hankins won the kicking job over John Mayers and Noah Rauschenberg with a strong showing in preseason camp.

“Going into camp, we really wanted to have the ability to turn place kicking into a weapon, and I think we have the ability on our roster from Hankins on down,” Aranda said. “That needs to occur more often. There was a wide open competition during camp, and he separated himself pretty early.”

On both sides of the field, Aranda saw too many penalties as the Bears were flagged 11 times for 99 yards.

“I think there were some penalties that were careless and were not reflective of who we are and who we want to be,” Aranda said. “I take responsibility for that.”

Saturday’s game against Texas Southern will mark Baylor’s first against a SWAC school. Texas Southern opened the season with a 40-17 loss to Prairie View A&M.

Baylor quarterback Gerry Bohanon was effective in his first start against Texas State as he hit 15 of 24 passes for 148 yards and showed command of the offense.