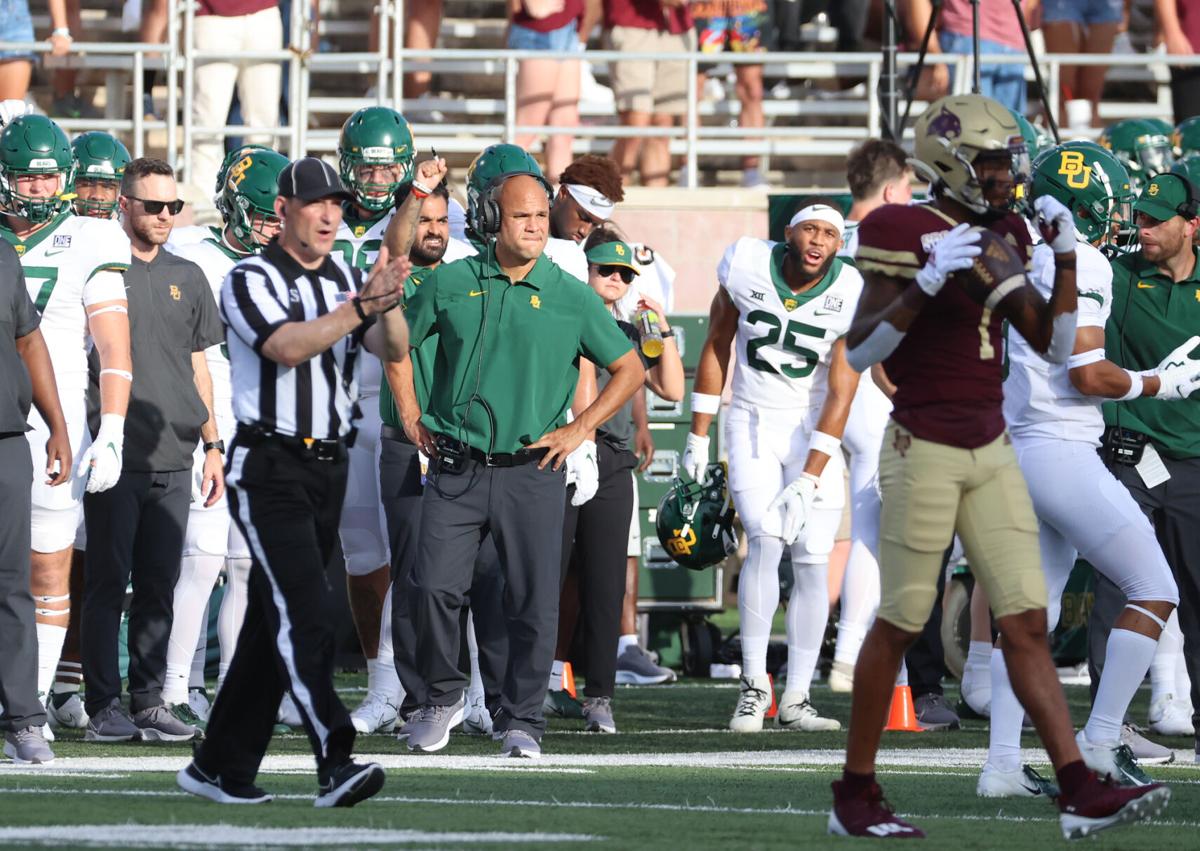 Baylor head coach Dave Aranda (in green shirt) expressed disappointment over the Bears’ 11 penalties in the season-opening win over Texas State. “I take responsibility for that,” Aranda said. 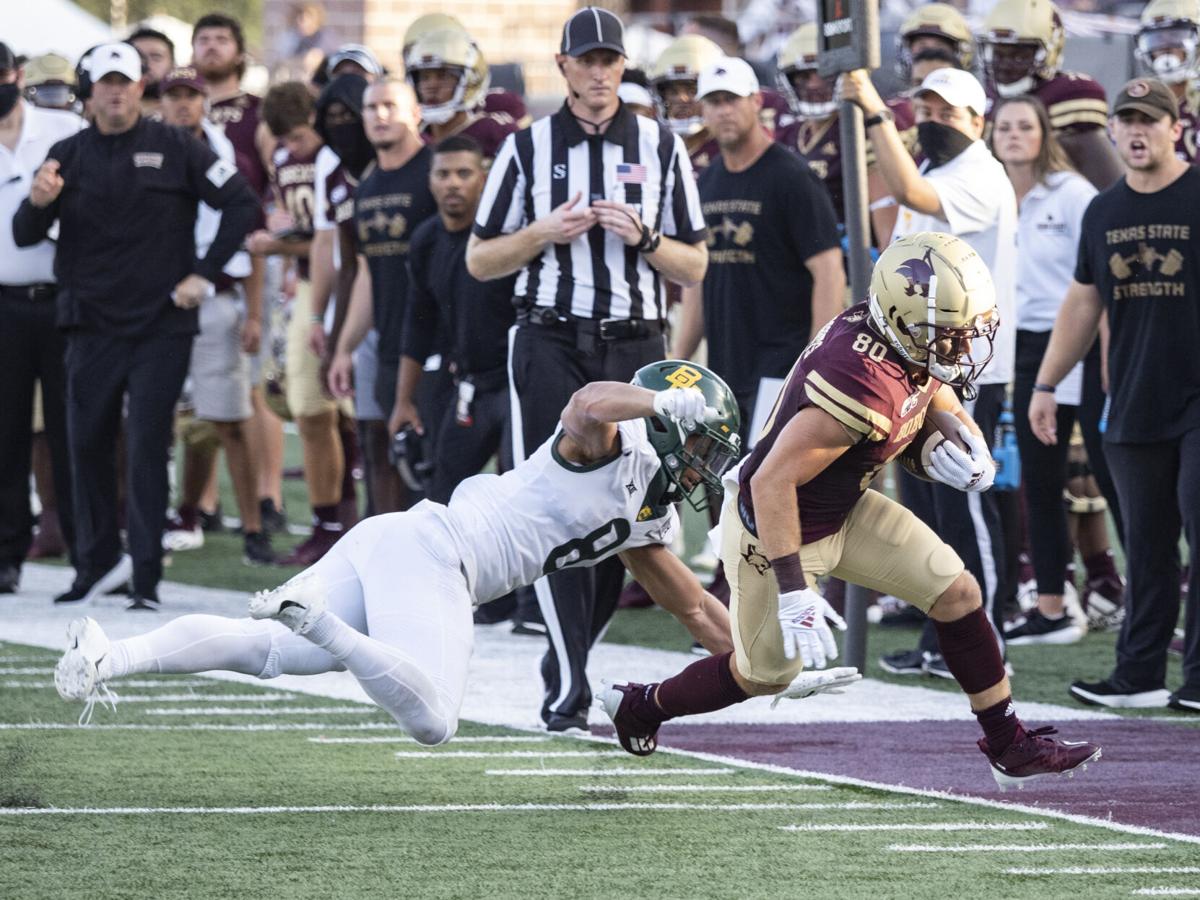 Texas State receiver Chandler Speights (right) gets past Baylor safety Jalen Pitre during the first half of last week’s game. Baylor coach Dave Aranda wants his defense to play tough and aggressive, but within control after the Bears were flagged 11 times last week, including six defensively.

As a coach, there is only so much you can control. You can draw up a scheme and implement it at the exact ideal moment, but if a player slips up and makes a mental or physical mistake on the field, it’s not really on you.

When it comes to Baylor’s penalty problems, however, Dave Aranda takes that stuff personally.

The Bears were flagged 11 times for 99 yards in their season-opening 29-20 win over Texas State last Saturday. That ranks 113th out of the 130 FBS teams in the nation through the first weekend of September.

“I’m disappointed in the penalties,” Aranda said in the postgame press conference. “As much as we’ve made an example of it, addressed it in practice, I need to do a much better job. I take that kind of personally. That’s an area I need to improve a lot.”

Sure, to a certain extent it comes down to player discipline, which falls back on the coach. Preparation is paramount.

But during the course of a game, you’ll also spot sins of aggression. A guy is just trying to make a play, and in the span of a split second, he hits a ball carrier too high and gets docked for it. Those are more forgivable mistakes.

Aranda said the Baylor coaches reviewed the film from the Texas State game, and took particular note of the penalties. Some were pre-snap flags, others occurred during the course of the play. All are teaching moments, he said.

“I think there’s things within the flow of a play, let’s say where my hands are inside but the guy sees it as being outside,” Aranda said this week. “Those are things when you’re playing fast and aggressive, we’ll take the hit on that. But (we can’t have) the pre-snap, the offsides, the post-snap, the personal fouls.”

The good news for Baylor is this: Flip that pencil around, and the Bears will find it’s equipped with an eraser on the other side. The mistakes are correctable, they said.

“I think we came out fine,” said senior defensive tackle Cole Maxwell. “There was just some small stuff, like technique and a little bit of unforced penalties and stuff like that that we can fix. But I think we’ll get it fixed and we’ll get it rolling.”

Of the 11 accepted penalties against Baylor, six came against the Bears’ defense, three against the offense and two happened on special teams. Two of Baylor’s best all-around defenders, cornerback Raleigh Texada and linebacker Terrel Bernard, absorbed costly infractions. Texada was flagged twice for defensive holding and once for pass interference, while Bernard was hit with a roughing the passer flag that gave Texas State quarterback Brady McBride and the Bobcats a fresh set of downs in the fourth quarter.

If Aranda had any hair, he might’ve pulled the rest out following that latter flag. Earlier in the week during a film session, the Baylor coaches showed the team a play from one of last year’s games. In the clip, the opposing quarterback released a pass that was intercepted by the Bears downfield. But just after he let the ball fly, a BU defender collided with him and was penalized for roughing the passer. Aranda said the collision “didn’t look like much,” but the coaches made a point to instruct the Bear defenders to guard their actions and aggression in that situation.

So, Bernard’s flag felt particularly exasperating at the time.

“It wasn’t exactly that situation, but pretty close that we just went ahead and did it,” Aranda said. “The ability to look at that from just a teaching and learning perspective, I know there’s time for me, just ego-wise, that I would like to think just showing it and covering it is enough, but it ain’t.

“So, now we’ve got to use what just happened. Here’s a decision we made that affected us in a negative way. This is not who we want to be. Here’s how we can get better. So those are discussions that have really already started.”

Overall, Aranda was pleased to come out of San Marcos with a win. He wanted the Bears to start crafting an identity in the opener, and he felt like they made inroads in that department. He witnessed a rugged, tough football team, one that wants to pound the ball between the tackles on offense and swarm to the ball defensively.

Not part of that identity? Committing silly, careless penalties.

“I think there were some penalties that were careless and were not reflective of who we are and who we want to be. I take responsibility for that,” Aranda said. “The penalties are something that sticks out and something (where) we’ve got to get better.”

Joseph Duarte of the Houston Chronicle joins the Trib's Brice Cherry and John Werner to discuss the potential addition of the Houston Cougars (plus UCF, BYU and Cincinnati) to the Big 12. Check out the podcast at WacoTrib.com, or wherever you find your podcasts.

Baylor head coach Dave Aranda (in green shirt) expressed disappointment over the Bears’ 11 penalties in the season-opening win over Texas State. “I take responsibility for that,” Aranda said.

Texas State receiver Chandler Speights (right) gets past Baylor safety Jalen Pitre during the first half of last week’s game. Baylor coach Dave Aranda wants his defense to play tough and aggressive, but within control after the Bears were flagged 11 times last week, including six defensively.