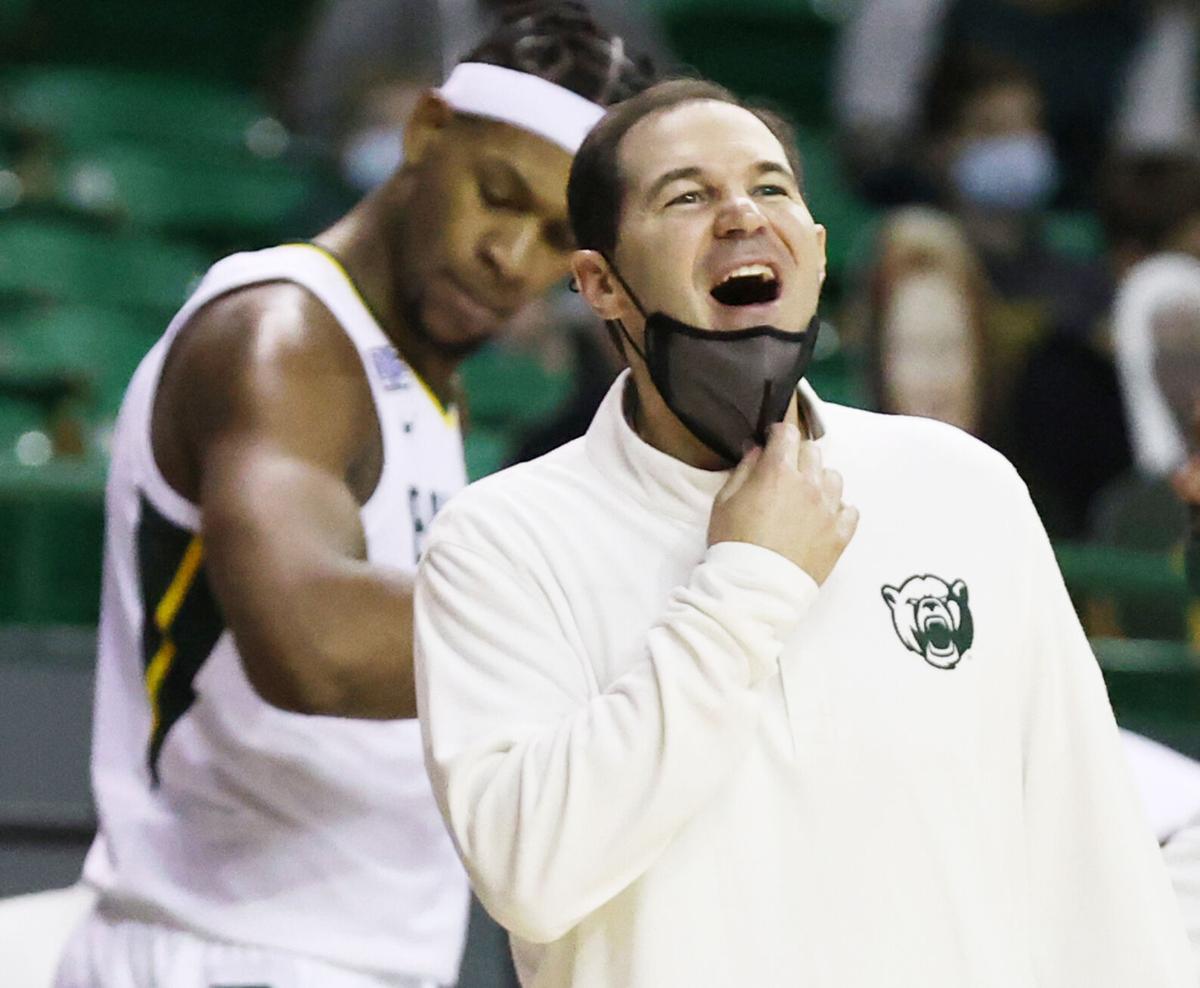 Baylor head coach Scott Drew calls in a play against Central Arkansas in the second half of a nonconference game in December. 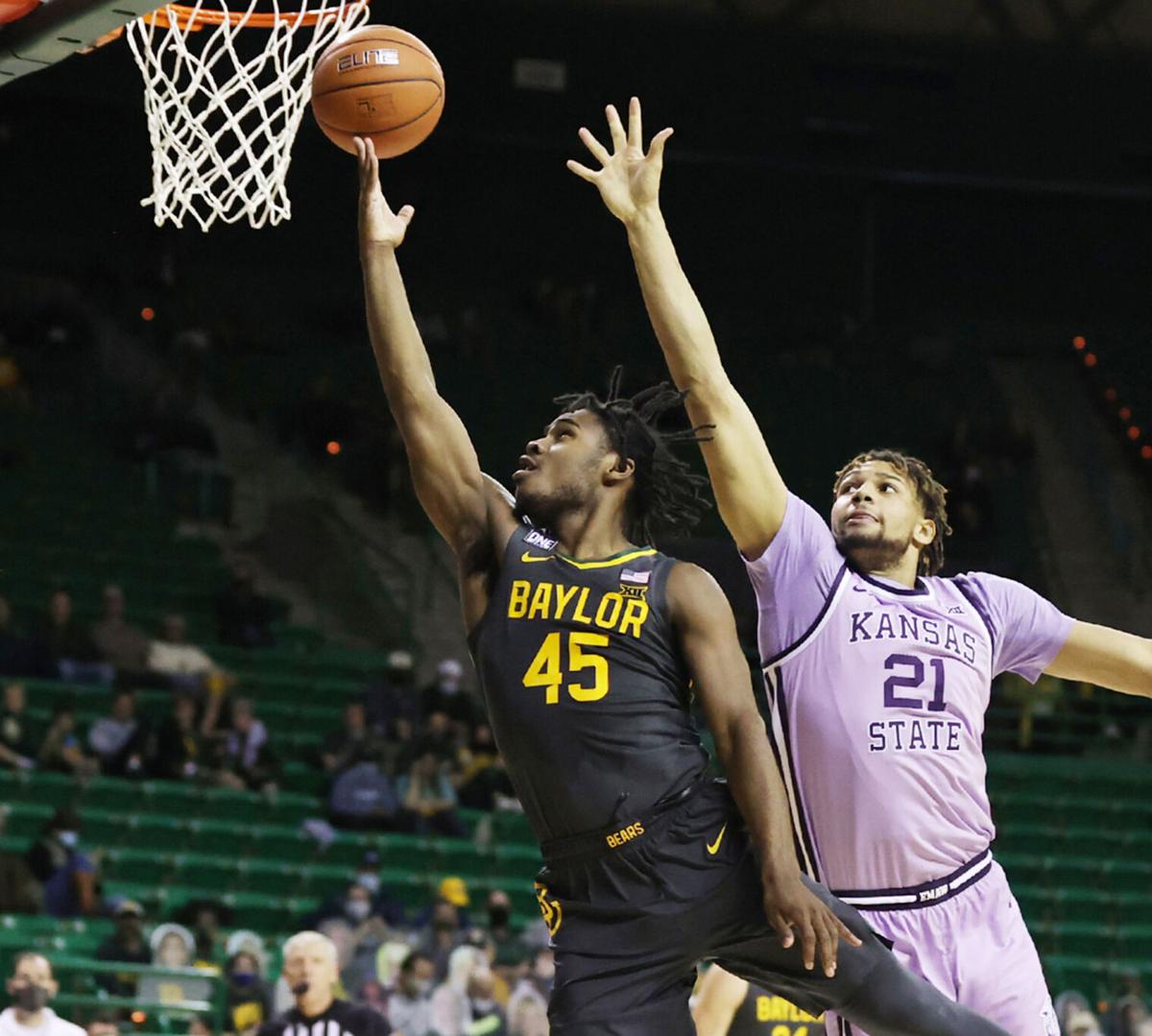 Baylor guard Davion Mitchell scores past Kansas State forward Davion Bradford in the second half of the Bears victory in late January at the Ferrell Center. 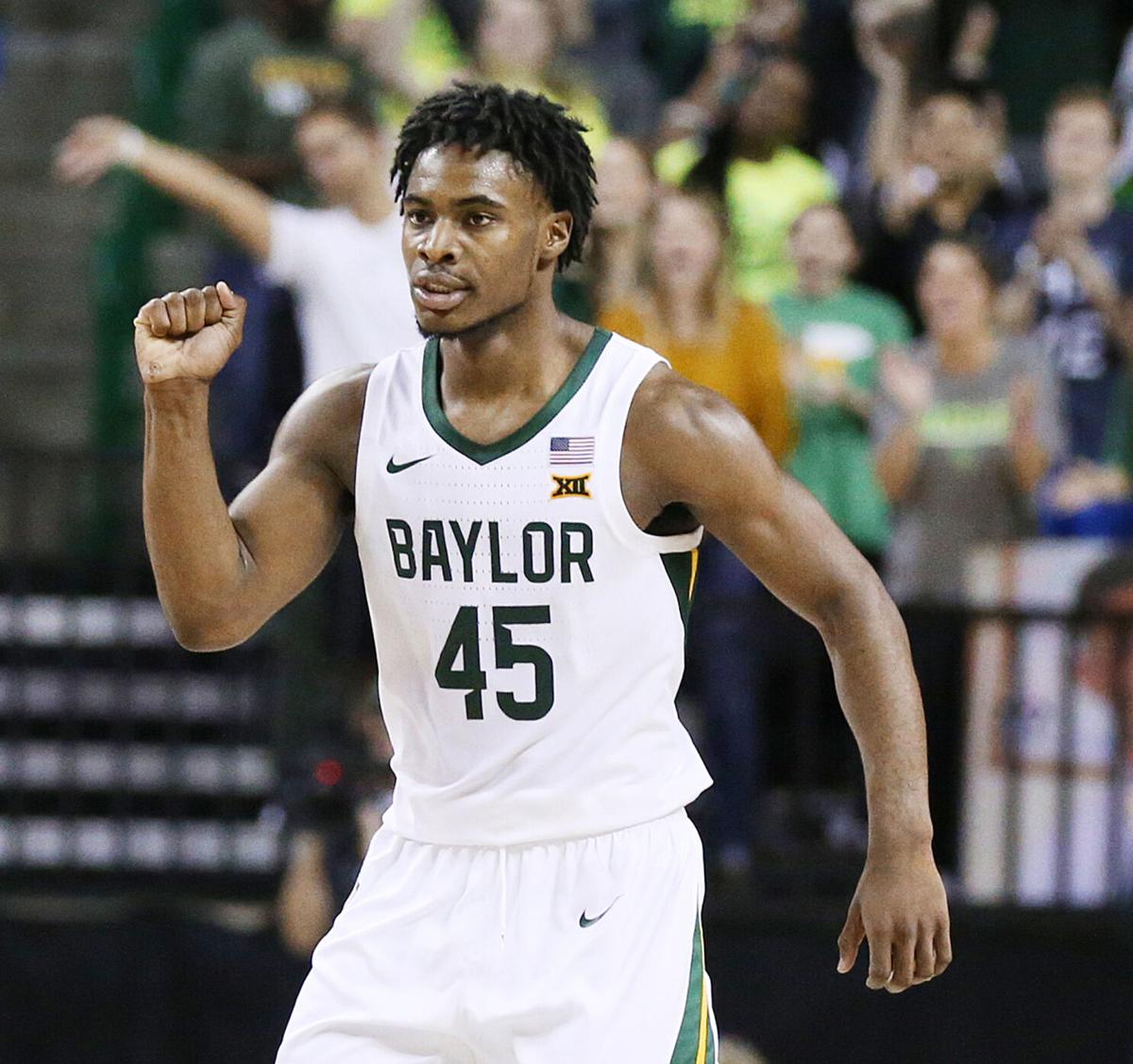 Baylor guard Davion Mitchell reacts to a score against Iowa State in the second half.

The Bears’ biggest hurdle in finishing off their best season in school history is COVID-19.

There’s no defense in college basketball that could lock down the Bears like this raging virus.

Coming off their 83-69 win over Texas in Austin on Feb. 2, the Bears were deservedly on a high.

It was impressive how the Bears took over in the second half as Davion Mitchell finished with 27 points and Jared Butler added 21. That’s become a common theme. With their depth and experience, the Bears always have a lot left in the tank to finish strong.

In past seasons, the Bears had grown accustomed to Big 12 games going down to the last two or three possessions. There’s been none of that this year. Baylor’s closest Big 12 games have been eight-point wins over Texas Tech and Kansas in mid-January.

Six of those nine Big 12 wins were on the road, meaning that six of Baylor’s last nine games would have been played at the Ferrell Center.

But a COVID-19 outbreak put Baylor’s basketball program on pause before the Feb. 6 home game against TCU. The Big 12 only requires a minimum six scholarship players available to play a game, so this round of COVID for the Bears was rampant.

With five games postponed, the Bears aren’t scheduled to play again until Feb. 20 against Oklahoma State at the Ferrell Center. The Bears will go 17 days without playing a basketball game.

That’s an eternity in the middle of a basketball season.

With only two weeks left in the regular season following the Oklahoma State game, it’s highly unlikely that the Bears can reschedule all six postponed games (including a Dec. 13 date against Texas) along with two already scheduled games against Iowa State on Feb. 23 at the Ferrell Center and Kansas at Allen Fieldhouse on Feb. 27.

After such a long break, can the Bears come back and play at the same brilliant level that’s made them arguably the best team in college basketball?

Their gritty man-to-man defensive skills and knack for getting the ball to the open man on offense will go a long way. No team in college basketball shares the ball like the Bears. But can they play with the same intensity night after night when they come back to play a condensed Big 12 schedule?

Though it appears the Bears are well on their way to winning their first Big 12 title, they still haven’t played second-place West Virginia. Coming off a three-game COVID-19 shutdown in mid-January, the Mountaineers are hot with five straight Big 12 wins to stand 2½ games behind the Bears with a 7-3 record.

Waiting out COVID-19 protocol is frustrating for a Baylor team that plays with such togetherness and joy. But among the nation’s top teams, Baylor is hardly alone in its COVID misery.

Beginning with their Dec. 5 showdown against Baylor in Indianapolis, the No. 1 Zags had five straight games canceled. Now 19-0, Gonzaga’s two games against Santa Clara in the past week were called off due to COVID-19 problems in the Broncos’ program.

With a 13-1 record, No. 3 Michigan is currently in a holding pattern like the Bears with five straight postponed Big Ten games. Sunday’s game against No. 21 Wisconsin will be the Wolverines’ first since a 70-53 win over Purdue on Jan. 22.

No. 5 Villanova’s five postponements have been more spread out. After recent Big East games against Xavier and DePaul were postponed, the Wildcats looked sharp in Wednesday’s 96-64 win over Marquette to improve to 13-2.

Of course, the most important goal for all the national championship contenders is to stay COVID-free during the NCAA tournament, which will be held entirely in Indiana in an attempt to control exposure to the virus.

It would make a lot of sense to avoid further COVID complications by canceling conference tournaments, but it appears they will go on as planned since they’re money makers for strapped athletic departments.

As good as the Bears were last year when their 26-4 season was cut short in March, this is Scott Drew’s best team. They’re more experienced, deeper, and play with a rare unselfishness. They also know this will likely be the last year they’re all together since Butler and Mitchell are projected first-round NBA Draft picks.

They’ve got a championship makeup. But COVID will likely have a huge say in how deep into March they will play.

Come together: Lady Bears shake off cold, prepare for OU

Running down a title: Lady Bears set for battle with Cowgirls

COVID-19 rust is a real thing.

Baylor Lady Bears pull away from OU in second half, 77-66

NORMAN, Okla. — The Baylor Lady Bears found the offense they needed in the first half, then clamped down on defense in the second half to fend…

The Big 12 has rescheduled three Baylor men's basketball games next week after they were previously postponed due to COVID-19.

Most of the time, the Baylor Lady Bears’ high-flying act isn’t limited to NaLyssa Smith finishing off an ally-oop.

Baylor signee Maryam Dauda was selected as a McDonald’s All-American announced by game organizers on Tuesday.

Baylor head coach Scott Drew calls in a play against Central Arkansas in the second half of a nonconference game in December.

Baylor guard Davion Mitchell scores past Kansas State forward Davion Bradford in the second half of the Bears victory in late January at the Ferrell Center.

Baylor guard Davion Mitchell reacts to a score against Iowa State in the second half.